Queensland has recorded one new locally acquired case of Covid-19 with Premier Annastacia Palaszczuk announcing the state will shut its borders to Victoria.

The new infection is in the mother of a 12-year-old boy that was listed as a confirmed case on Thursday.

The premier revealed the cases had been detected while the family were quarantining, adding there was ‘zero’ risk to the community.

She confirmed it was the highly infectious Delta strain of the virus and all three members of the family including the boy’s father have now tested positive.

Ms Palaszczuk meanwhile announced the whole state of Victoria would be declared a hotspot from 1am on Saturday.

Any returning Queenslanders will have to quarantine for 14 days upon arrival back in their home state after the cut off.

‘I just think that the clear message to Queenslanders is definitely do not go to New South Wales and do not go to Victoria during this period of time,’ Ms Palaszczuk said.

The infected boy returned from the United States and completed a stint in hotel quarantine in Sydney with his mother before flying to Brisbane on Qantas flight 544 on last Friday, July 9.

Chief Health Officer Jeannette Young said NSW authorities will now have to determine how the 12-year-old became infected during quarantine.

Dr Young says 62 contacts of that family have been identified. 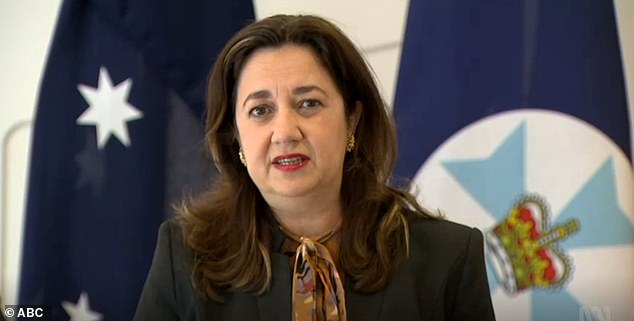 Meanwhile, there are fears of an outbreak related to a worker at Brisbane International Airport, who completed three night shifts on Monday, Tuesday and Wednesday, while she was infectious and was also very active in the community.

The worker was a supervisor at the boarding gates and has tested positive.

‘We have already gone through CCTV footage and found 23 close contacts, 22 casual contacts and we expect there will be others,’ Dr Young said.

Dr Young suspects Queensland is dealing with at least one, and possibly two, entirely new outbreaks that are not linked to the cases that sent southeast Queensland and Townsville into a snap three-day lockdown just over a fortnight ago.

Ms Palaszczuk has told residents of the southeast that masks will help keep them out of what would be a fourth lockdown this year. Masks will be mandatory for another week, until Friday, July 23.

In the case of the airport worker they include the Brisbane International Airport, and the Woolworths and Chemist Warehouse at Annerley,

In the case of the boy and his father, the sites include Qantas flight 544 last Friday, the Aspley Medical Centre where the child was tested, and the father’s workplace, Rowland Financial Advisory Service, at Cotton Tree on the Sunshine Coast.