Jeremy Corbyn’s cunning plan to become world king popped a gasket at 7.15pm when the no-confidence motion’s result was announced: beaten by 306 to 325.

Nineteen votes! By recent standards, Theresa May had creamed it. Enough free space to park a battleship.

After Tuesday’s agonies, Mrs May was suddenly all smiles, almost chortling. ‘This House has put its confidence in this Government,’ she said, exhaling happily.

‘Now it was time ‘to ensure that this House retains the confidence of the British people’.

A hefty task. The anti-democrats are limbering up to dilute and degrade Brexit and they are all propagandising against No Deal (without ever saying what’s so bad about such an outcome).

The coming weeks could do more damage to this place than G Fawkes ever plotted. 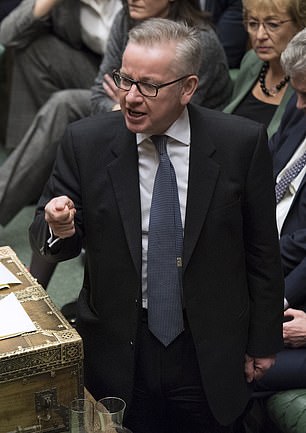 Much of yesterday was a prolonged, earache-inducing, temple-dinging, hyperbolic, hypocritical, baloney-spattered shriekfest. ‘A fish rots from the head down!’ warbled Stella Creasy (Lab, Walthamstow), attacking Mrs May.

The same Creasy, an over-rated item, has often said the same about her own party leader, whom she was now proposing should be prime minister.

As the debate started, Mrs May looked pretty knackered, eyes like a Spirograph drawing, her contours drooping.

Caramel custard does that when left on the pudding trolley too long. ‘Won’t you just go?’ bawled the SNP’s Peter Wishart. That’s no way to speak to a clam, Wishart.

John Baron (Con, Basildon and Billericay) told her to ‘KBO’. Rebecca Pow (Con, Taunton Deane), gushy as an actress in a dogfood advert, whooped: ‘There’s so little time to get in all the achievements of the Government.’

Various MPs accused their opponents of being ‘party political’. Er, is that not rather the point of a no-confidence debate?

The DUP’s Nigel Dodds disclosed that he and his party had received many entreaties to support the Tories – ‘and some of those entreaties have even come from the Government side’. In other words, some Labour MPs were appalled by the thought of a general election.

A similar point was made by John Woodcock, former Labour and now Independent MP for Barrow and Furness. Mr Corbyn and Shadow Chancellor John McDonnell were, he said with regret, ‘simply not fit to hold high office’.

This generated mutters of ‘disgrace!’ from nearby Labour MPs (although Warwick and Leamington’s Matt Western had seemed to nod admiringly).

Mr Woodcock hit back at the tutting comrades, saying ‘many of them’ privately encouraged him to attack Corbyn.

Confidence motions come along so seldom, one expected the Chamber to be full and absorbed by a mood of crisis.

It was not. Even at the start, there were gaps on the benches. Was lunch more important? It has to be said there was a formidably good jam roly-poly in the canteen on Tuesday.

Or maybe MPs long ago concluded that Mr Corbyn, when it comes to oratory, is pants. His speech yesterday was joltingly bad: hesitant, trembly, timid, barely coherent.

A confidence motion, for goodness sake, demands grandeur, intensity, and its mover’s speech is best made without notes. Mr Corbyn clung to a script and delivered it sans aplomb. 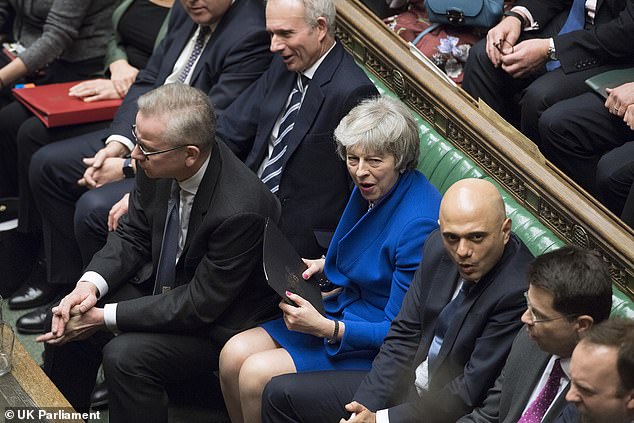 Michael Gove in the Commons with Theresa May, who defeated Jeremy Corbyn’s no-confidence motion last night

A would-be prime minister needs to project the optimism of the pilot aiming for open skies, should set forth his wares with a flourish, giving a sense of how change could slake the nation’s thirst.

But Mr Corbyn is hobbled, for the Blairites prevent him from embracing Brexit. Thus he just sounds like a member of the same-old gang.

Emma Hardy (Lab, Hull W and Hessle) jabbered about ‘despair and disassociation’ in politics and the need to earn the ‘trust and faith of ordinary people’. Hard to do that if you try to block the Leave result.

‘Give people the change that they need,’ yelled this Hardy. Yes, yes, yes, many of us think. Change is what we crave.

But it is change from the Blairite/Cameroon/CBI/Roland Rudd brigade, the Establishment creeps who for decades have fixed political power. A pro-Remain Labour party forfeits the ‘change’ card.

Mike Wood (Con, Dudley S) called Labour ‘paleo-Marxists’. Somehow this was misheard as ‘pillock’ by George Howarth (Lab, Knowsley), who harrumphed that it was unparliamentary language.

Hearing check for George, matron. Geraint Davies (Lab, Swansea W) claimed that leaving the EU would be ‘a betrayal of socialism’ and said: ‘Europe is a much more virtuous place than before.’ Eh?

Alex Burghart (Con, Brentwood and Ongar) called the debate ‘a bonding experience’ for the Tory party.

Even Anna Soubry (Con, Broxtowe) and Antoinette Sandbach (Con, Eddisbury) found it in themselves to make moderately supportive speeches in the Government’s cause. Remainiac Sandbags speaks up for Tories shocker! Won’t last.

But the best speech came at the end, from Michael Gove. The Environment Secretary tore into Mr Corbyn with a ferocity quite beyond the usual darting feints of clever debate.

After some wit (comparing the Lib Dems to Vicky Pollard in their ‘yeah but no but yeah but no’ attitude to referenda), and even maybe some irony (he talked of Mrs May’s ‘inspirational leadership’), he vented persuasive anger at Mr Corbyn’s lack of support for British interests, British armed forces, British pride.

It was a brilliant turn from Gove, even maybe an audition for greater things. But the vacancy for the top job has been delayed, for a few months at least.