Stint us he did not. Jeremy Corbyn’s speech to the Labour conference yesterday lasted well over an hour and felt twice that. Even his late amigo Fidel Castro, notorious gasbag, might have advised Comrade Jeremy to cut some of the oration’s dribblier passages.

Yet the Brighton faithful (how nearly I wrote ‘Nuremberg’) would have been delighted if he had kept going all day. They stamped their feet, thrust clenched fists in the air, chanted Mr Corbyn’s name and waved football-supporter scarves.

We were entertained beforehand by a lesbian and gay choir, the Rainbow Chorus. Jolly tuneful they were, too. Brightest part of the day. 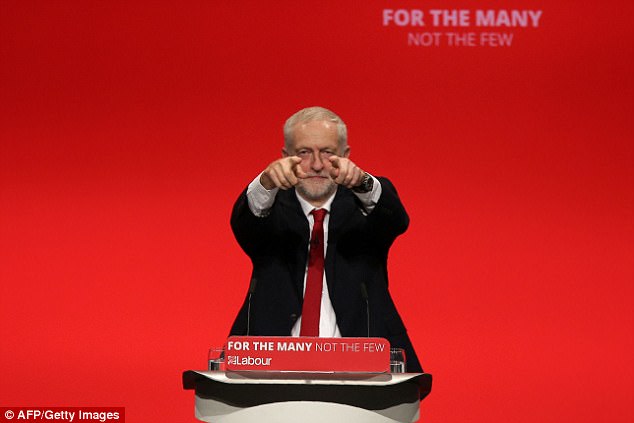 Despite the excessive length of the speech, those on the floor were lapping it up 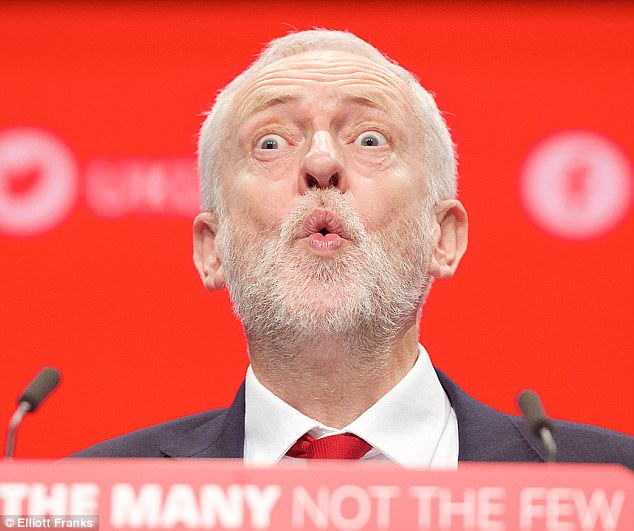 For demi-god status, Mr Corbyn is closing in fast on the Dalai Lama for those at Conference

Then came a brief video with various must-haves of the modern political conference: Uplifting footage of The Leader in a hard hat at building sites, crouching to talk to children, riding in a train (cue shrewd gazes into the distance) and meeting a young woman who peered up at him in a wondrous, beseeching manner.

For demi-god status, Mr Corbyn is closing in fast on the Dalai Lama. He told us he had been in touch with a family in hurricane-blown Dominica to try to solve their problems. The one surprise this week has been that when a delegate fainted on Tuesday, Mr Corbyn did not spring forward to lay his healing hands on her. In an appropriate way, I should add.

When he entered the hall yesterday he was rewarded with two minutes of standing ecstasy. He smiled toothy benevolence on his earthlings. He wanted the whole country to be ‘infected’ by the ‘unity, love and affection’ that had been allegedly evident in Brighton this week. Anti-Semitism for all, then.

The ‘unity’ thing is debateable. On Tuesday night I was accosted by an activist who earnestly complained that the Mail was not reporting adequately how ‘evil’ Mr Corbyn and his adherents were. The activist – decent, church-going – was aghast that his Labour Party was now more interested in students and middle-class concerns than in the properly needy. 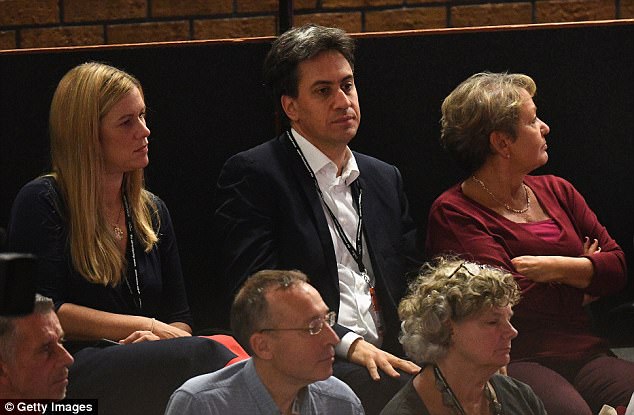 For the first half hour, Mr Corbyn took a self-congratulatory look at his election result 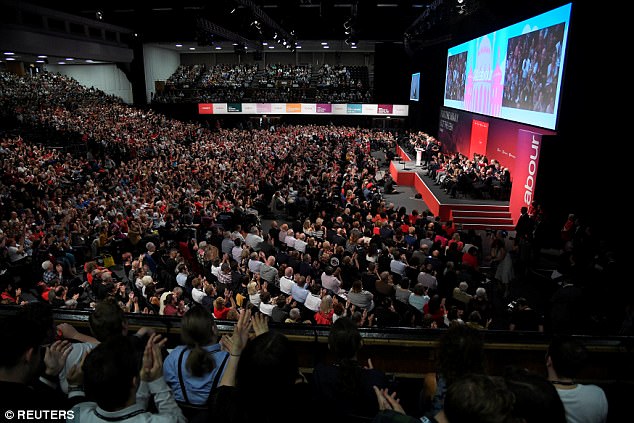 I stayed in the hall for a while but Mr Corbyn showed no desire to leave the stage. He just stood there, boogying to Power to the People, dizzy with it all

When Mr Corbyn mentioned the Democratic Unionists (who are supporting Theresa May in the Commons) and the late Margaret Thatcher, there came prolonged boos. The media was attacked – the Mail took a flesh wound, though somehow we survive.

Lone delegates shouted, ‘Shame!’ when Mr Corbyn highlighted the wickedness of Tory Britain. They threw arms to the ceiling, evangelical happy-clappies seized by the spirit of their Lord. In the front row, John Prescott struggled to stay awake.

The most disgustingly opportunistic parts of the speech concerned the Grenfell Tower fire, which Mr Corbyn rode hard for party advantage. Grenfell, he claimed, was a ‘tragic monument’ to a ‘degraded regime’ which had ‘contempt for working-class communities’.

Moistening as hammily as Tony Blair at his worst, Mr Corbyn chose this moment to turn to some poetry – four lines of doggerel by Ben Okri:

‘Those who were living now are dead,

Those who were breathing are from the living earth fled,

If you want to see how the poor die, come to Grenfell Tower.

See the tower and let a world-changing dream flower.’

It’s not exactly Tennyson, is it? But Mr Corbyn said, ‘Thank you, Ben, for that wonderful poem’, as though Mr Okri was a primary school pupil who had written a little essay for English. 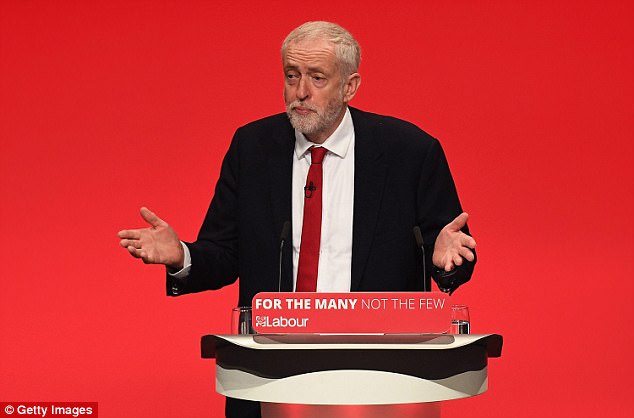 When it came to Brexit, he suddenly started speaking at Pinky and Perky speed 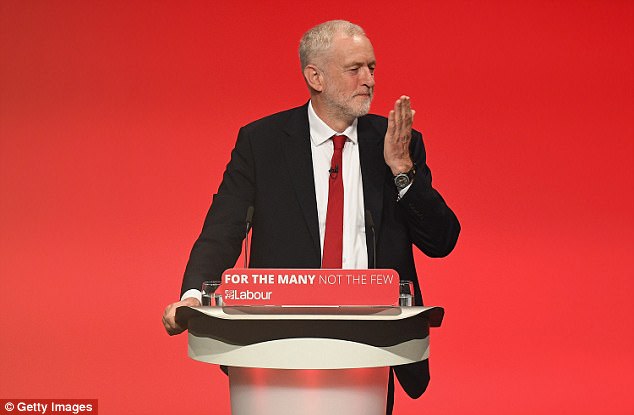 Confidence brimming, he offered patronising advice to Donald Trump, told Mrs May to ‘pull yourself together or make way’ and claimed ‘we are now the mainstream’

He loves to thank people because it allows him to own them. He thanked Diane Abbott. She bathed in the applause, Cleopatra imperious in a trough of asses’ milk. We even had to sing ‘happy birthday’ to her. He thanked frontbenchers Emily Thornberry, Sir Keir Starmer and Barry Gardiner. Dear little Barry was so excited, he boinged to his feet to wave frantically. Cooeee! Ms Thornberry and dozy Sir Keir followed suit, determined not to let Barry hog the applause. When carthorse Angela Rayner was thanked, she clapped herself. When Andrew Gwynne was thanked, people looked at each other uncertainly, as if to say ‘who’s he?’

For the first half hour, Mr Corbyn took a self-congratulatory look at his election result. He spent so much time on that, there was no time to mention defence or farming. When it came to Brexit, he suddenly started speaking at Pinky and Perky speed, gabbling that while he ‘respected the democratic result’, Labour would ‘guarantee unimpeded access to the single market’. Ignore the EU referendum result, in other words.

Confidence brimming, he offered patronising advice to Donald Trump, told Mrs May to ‘pull yourself together or make way’ and claimed ‘we are now the mainstream’. The one peril in that is that he would no longer be a bold outsider, which may be his best card.

Conservatives should not discount the saleability of Mr Corbyn’s attack on tax-dodging multinationals. If such companies had sense, they would repair their greedy ways before Mr Corbyn’s smash-and-grab nationalisers steal their businesses. He said he would ‘take back’ utilities (not ‘buy back’). That echo of Vote Leave’s ‘take back control’ slogan is no accident. Tory Brexiteers need loudly to reclaim ‘take back control’ in Manchester next week.

The delegates went nuts as he promised renationalisation and swingeing moves against house-owners. The state will be master! ‘It’s as if we are stuck in a time warp,’ cried Mr Corbyn. How horribly true. When he finally shut up, a woman tried to give him a garland (he threw it away). The communist Red Flag was sung.

I stayed in the hall for a while but Mr Corbyn showed no desire to leave the stage. He just stood there, boogying to Power to the People, dizzy with it all.