Fast-fashion brand Quiz has suspended one of its suppliers amid claims that its factory workers in Leicester are paid as little as £3-an-hour.

It follows an investigation by The Times which said an undercover reporter was told by bosses at a factory, where she saw Quiz-branded jackets, she would be paid £3-£4 an hour.

Bosses at the factory told the undercover journalist before the lockdown that she would have to do two days of unpaid work and then she would move to a rate of £3-£4 an hour.

Quiz said that the allegations ‘if found to be accurate are totally unacceptable’ and it is grateful to the press for highlighting the alleged breaches.

The company believes one of its suppliers used a sub-contractor ‘in direct contravention of previous instruction from Quiz’.

It said it will terminate relationships with any suppliers who fail to comply with the Group’s Ethical Code of Practice or meet the Group’s standards.

The national minimum wage for people over 25 years-old is £8.72 an hour.

Chief executive of Quiz Tarak Ramzan said: ‘We are extremely concerned and disappointed to be informed of the alleged breach of National Living Wage requirements in a factory making Quiz products.

‘The alleged breaches to both the law and Quiz’s Ethical Code of Practice are totally unacceptable. 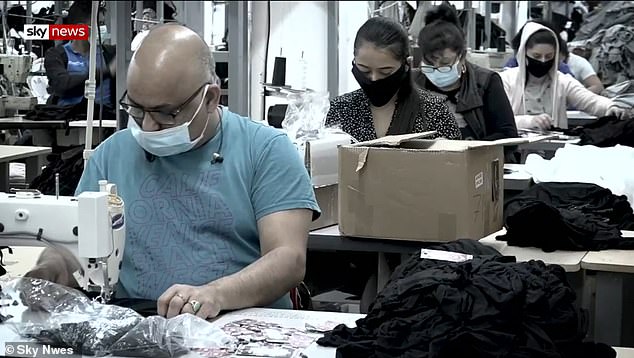 An undercover reporter was told by bosses at a factory, where she saw Quiz-branded clothing, that she would be paid £3-£4 an hour 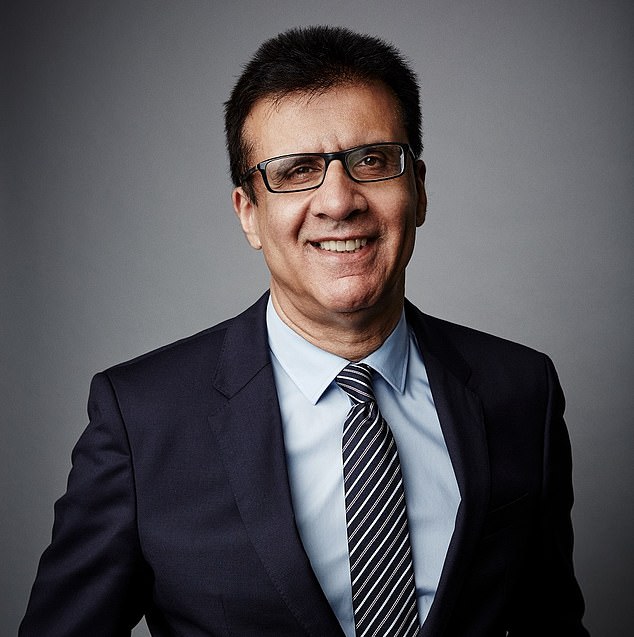 ‘We are thoroughly investigating this incident and will also conduct a fuller review of our supplier auditing processes to ensure that they are robust. We will update our stakeholders in due course.’

In a statement, Quiz said: ‘Quiz is extremely concerned by information recently reported in the media regarding an alleged instance of non-compliance with National Living Wage requirements in a factory making Quiz products in Leicester. The Group is very grateful to the press for highlighting these alleged breaches.

‘The Group is currently investigating the reported allegations, which if found to be accurate are totally unacceptable.

‘From our initial review, we believe that one of Quiz’s suppliers based in Leicester has used a sub-contractor in direct contravention of a previous instruction from Quiz.

‘It is this sub-contractor that is subject of the National Living Wage complaint. Quiz has immediately suspended activity with the supplier in question pending further investigation.

‘The Board is aware that Quiz has clear-cut social responsibilities and legal obligations and understands the critical importance of ensuring the Group’s products are sourced from manufacturers whose business operations conform to appropriate standards. 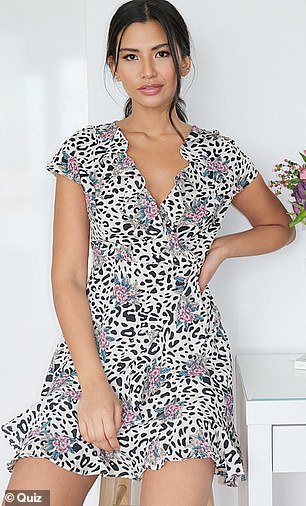 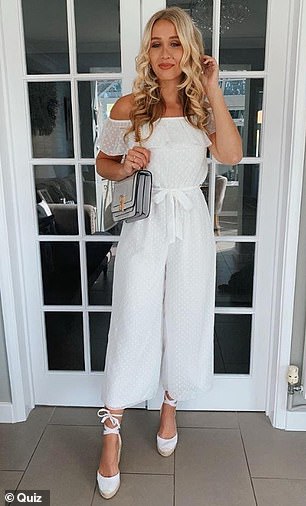 Quiz said it will terminate relationships with suppliers who fail to comply with the Group’s Ethical Code of Practice. Pictured: a printed wrap dress (left) and a white jumpsuit (right) sold by Quiz

‘Quiz monitors its supplier base through audits and site visits and is in the advanced stages of appointing an independent third-party partner to provide more regular audits of suppliers in the Leicester region.

‘In addition to taking immediate action on this incident, the Board commits to a full review of the Group’s current auditing processes to ensure they are robust enough to ensure on-going compliance with our Ethical Code of Practice throughout the Group’s supply chain.’ 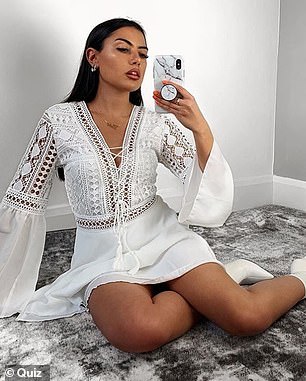 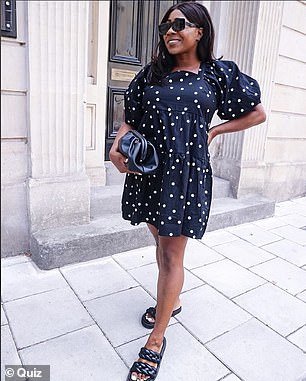 The company believes one of its suppliers used a sub-contractor ‘in direct contravention of previous instruction from Quiz’. Pictured: a white crochet v-neck dress (left) and a black polka dot dress (right) sold by Quiz

A Sunday Times investigation revealed on July 5 alleged that workers in a Leicester factory making clothes destined for Boohoo were being paid as little as £3.50 an hour.

More than £1billion was wiped from Boohoo’s share price as it nose-dived by more than 25 per cent.

Next, Asos and Amazon have dropped Boohoo clothes from their websites other online retailers, including Zalando and Very.co.uk, have also temporarily suspended their sale. 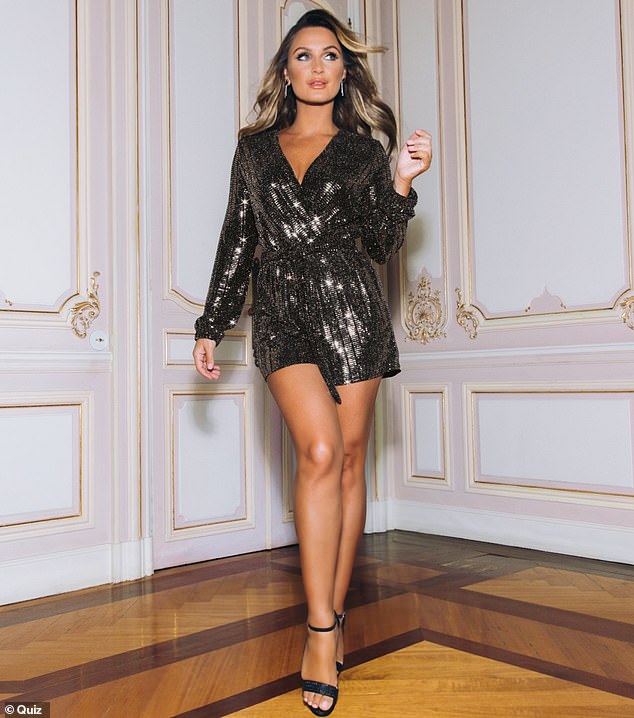 Towie star Sam Faiers has a collection of clothes with Quiz, including this rose gold and black sequin wrap playsuit

Celebrities influencers including model Jayde Pierce and reality TV star Vas Morgan turning their back on the brand. 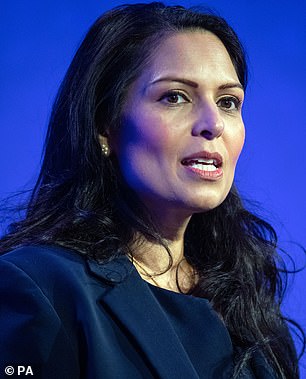 Ms Patel is thought to now be considering new laws on modern slavery after fears the current legislation is no ‘fit for purpose’.

The National Crime Agency (NCA) confirmed on July 8 that it received information regarding the allegations of modern slavery and exploitation in Leicester.

In a statement, it said: ‘We are now in the process of assessing that information, alongside our partners, which include Leicestershire Police, HMRC, GLAA, the Health and Safety Executive, Leicester City Council, Leicestershire Fire and Rescue and Home Office Immigration Enforcement. Our primary focus is on the protection of vulnerable people and safeguarding them from harm.

‘As part of that, in recent days NCA officers have joined partners in attending a number of business premises in the Leicester area to assess some of the concerns that have been raised in respect of modern slavery. These visits are likely to continue.

‘The NCA does not intend to give a running commentary on our activity, but once our assessment is complete we will look to engage with partners to deliver a response at the appropriate level.

‘Tackling modern slavery is one of our highest priorities, and we are committed to working with partners across law enforcement, the private, public and charity sector to pursue offenders and protect victims wherever they may be.’

Leicester is under a localised coronavirus lockdown after a surge in new cases, with non-essential shops closed and schools shut.