R Kelly accused of raping teen, 16, who was fed drugs and alcohol in his hotel

A new woman has come forward to claim that she was raped by R Kelly in 1995 or 1996 following a concert in Baltimore.

Latresa Scaff and Rochelle Washington were 16 and 15 when they claim Kelly invited them back to his hotel room where they were offered a variety and drugs and alcohol before one of them was sexually assaulted by the singer.

Scaff said that just before she was raped by Kelly, a man entered the room and stated: ‘R. Kelly is getting ready to enter the room. Pull up your dresses.’

The two will soon be sharing their story again, as they are scheduled to meet with attorneys for the Southern District of New York on Friday.

A spokesperson told DailyMail.com that they could neither confirm or deny that an investigation had been open into Kelly.

A lawyer for another R Kelly accuser.Faith Rogers, told DailyMail.com that her client had also meet with attorneys a few weeks ago in New York.

Victims: Latresa Scaff and Rochelle Washington (above on the night of the alleged assault)were 16 and 15 when they claim R Kelly invited them back to his hotel room in 1995 or 1996 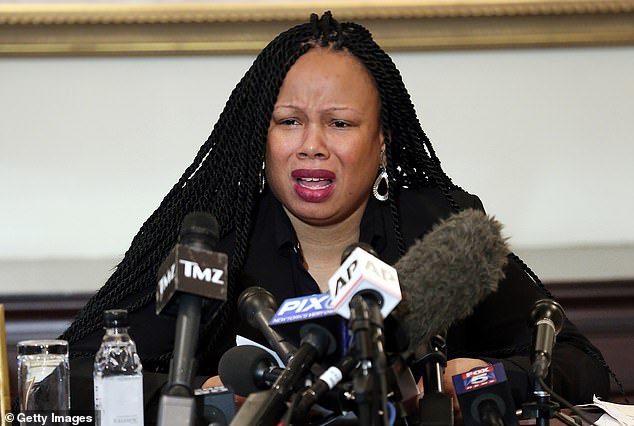 Allegation: Scaff (above) claims that she was raped by Kelly after being offered marijuana, cocaine and alcohol

The high school students obliged that request, having smoked marijuana and consumed multiple alcoholic beverages by that point.

‘Rochelle and I did what we were told. We were standing, and we had panties on underneath our dresses,’ said Scaff, who went on to state that Kelly so joined the two teenagers.

‘Mr. Kelly was wearing jeans and a white t-shirt. His penis was out and was over the top of his pants,’ said Scaff.

‘He started talking about dancing. He asked both of us to dance. He was on the bed when he asked. I said I would dance for him, but Rochelle didn’t dance. Rochelle sat down on the bed,’ said Scaff, who appeared alongside attorney Gloria Allred.

That was when the assault began according to Scaff.

‘Rochelle said “No, I do not do that.” She left and went into the bathroom.’

That was because Washington had previously been raped six months prior, and just seen the man who assaulted her at the mall earlier that day.

‘When Kelly was alone with me, he asked me to perform oral sex on him. I was under the influence of marijuana and alcohol and did it. He then had sexual intercourse with me even though I did not have the capacity to consent,’ said Scaff.

‘When he was finished, Kelly said to me, “You’re not going to please me?”‘

Kelly then left the room and neither of the girls ever saw him again.

Scaff also offered up proof that the two were at Kelly’s hotel.

‘We were excited that we were going to be with R. Kelly again and we called the local radio station 92Q (aka 92.3). We said “We are here with R. Kelly,”‘ said Scaff.

‘I just wanted to have fun, and I was excited to meet Mr. Kelly, but as time went by I felt in my heart that I couldn’t ever forget that day,’ she said.

‘I can’t get out of my head what I saw and what happened.’