Race to save ‘England’s finest view’ at Blenheim Palace

The race is on to save the ‘finest view’ in England after a £12million project was launched to prevent the iconic 307-year-old Grand Bridge at Blenheim Palace from collapsing.

Sir Winston Churchill was born on the grounds in Oxfordshire which were landscaped by legendary Capability Brown some 246 years ago.

The world famous bridge goes over two lakes and is the main focal point of the glorious surroundings.

But huge levels of silt have built up in the lakes which have since become incredibly shallow – just 12 inches in places.

Engineers have warned that the Grand Bridge (pictured), which was built 246 years ago 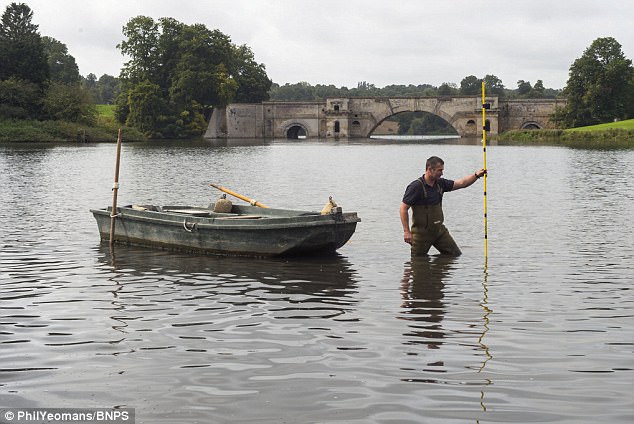 Nick Baimbridge, from Blenheim, was pictured in the Queen Pool which is now so shallow people can almost walk across it 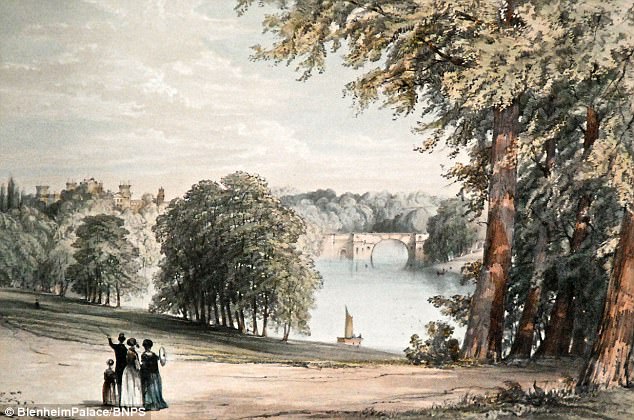 The historic lakes are now in risk of drying out completely as people can almost walk across them.

If that was to happen, engineers have warned that the stability of the Grand Bridge, built in 1710, would be threatened.

Officials have agreed to take drastic action to save the vista, which Sir Winston’s father declared as the finest in the country.

The huge restoration of the Queen Pool and the main lake will see a fleet of diggers dredge 400,000 tonnes of silt – enough to fill Wembley Stadium to its roof.

The project will restore the two lakes to their original 18th century depth of 6ft 7in and temporarily reveal flooded rooms within the bridge structure which have been underwater for more than 100 years.

The dredging process will also uncover archaeological features such as the original canal system layout, which predated the bridge, for the first time in centuries.

Initial investigative work is underway, with the main dredging work due to take place next year.

It is expected to cost between £10million and £12million to do the dredging and repair the bridge.

It will be one of the largest projects ever undertaken at a UNESCO World Heritage Site in the UK and will need to take place in a short window of time – about 20 weeks – to prevent potentially catastrophic additional damage being caused by the lake bed, dam and bridge foundations drying out. 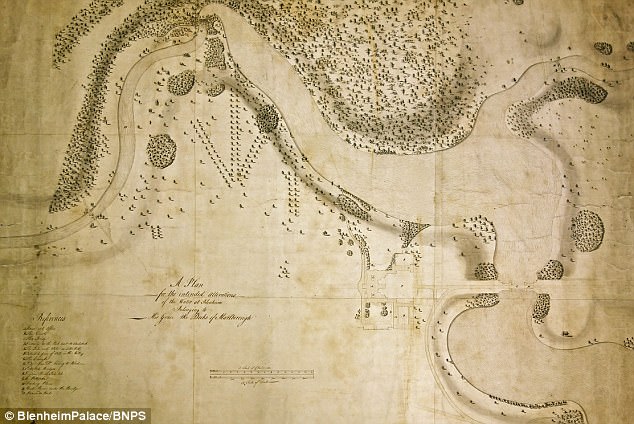 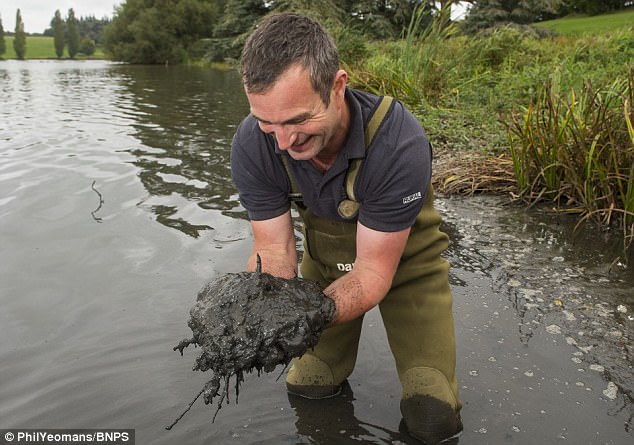 The project will also benefit local wildlife and there are plans for passenger boats to allow tours on the water for the first time.

Roy Cox, head of estates at Blenheim Palace, said: ‘There is an absolute certainty that, if we do not do something radical soon, the view will be lost forever.

‘We have to act now to safeguard this iconic landscape for future generations to discover and enjoy.

‘It has been caused by nature. Originally, the lake was a 10ft river and when Capability Brown came along and created the landscape he dammed up the river and created 160 acres of lake.

‘In doing so he stopped the flow of water, which causes the river to drop its sediment. This is basically the river fighting back over 300 years.

‘This will be one of the largest civil engineering projects ever undertaken at a stately home and will need to be completed within a relatively short time frame to prevent permanent damage both to the lakes and the bridge.

‘Because it’s a Site of Special Scientific Interest, a World Heritage Site and a listed parkland we have to be extremely sensitive to the landscape we are working in.

‘By controlling the dam we will gradually drop the water level by about 4inches a day, allow the silt to dry out and then bring in the diggers to extract it.

‘We will be removing enough silt to entirely fill Wembley Stadium and the logistics of the rescue plan are incredibly complex. 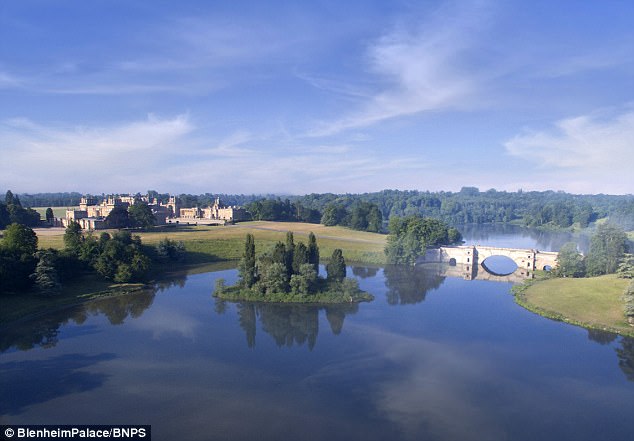 If the lakes dry out, engineers have warned that the stability of the Grand Bridge, built in 1710, would be threatened 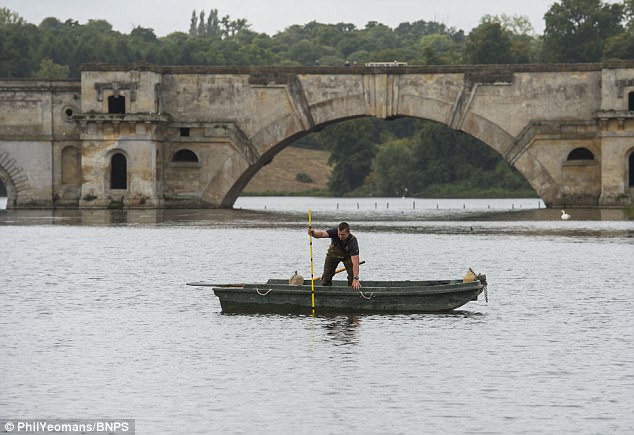 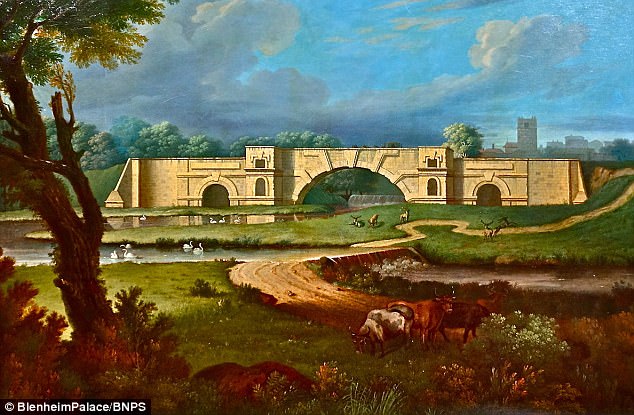 ‘It also means we will be revealing the foundations of the bridge and unearthing what Capability Brown flooded for a short period of time.

‘We will also be working with agencies to look at how we manage it to prevent the silt building up at the same speed in the future.’

The 400,000 tonnes of silt dug out of the lakes will be landscaped into a 200-acre area of the estate and returned to agriculture.

Blenheim Palace, which has 2,000 acres of grounds, was built in the early 18th century to celebrate Britain’s victory over the French in the War of the Spanish Succession.

The lake was created between 1768 and 1771 by Lancelot Capability Brown, the man known as ‘England’s greatest gardener’, and is the central feature of the Grade I listed landscape.

The garden at Blenheim is one of the most historically significant Capability Brown landscapes, created at what is widely regarded as the pinnacle of his career.

The palace is the ancestral home of the Dukes of Marlborough and was the birthplace of Sir Winston Churchill.

In 1874 Lord Randolph Churchill said to his new wife as they passed through the Woodstock Gate and she saw the stunning landscape for the first time ‘this is the finest view in England’.

She later wrote: ‘As we passed through the entrance archway and the lovely scenery burst upon me, Randolph said with pardonable pride ‘This is the finest view in England.’

The project to help safeguard the idyllic viewpoint is part of a ten-year management plan with goals for the sustainable future of the site.