Rachel Weisz is having a baby with James Bond at the age of 48. I’m very pleased for her, and also for the new father-to-be Daniel Craig, 50, especially as the thrilling news of Baby 007 comes as the Queen mourns the loss of Craig’s most talented and acclaimed co-star, Willow the Royal corgi.

Yeah, the Lord giveth and the Lord taketh away.

Rachel Weisz was three years below me at my school and I don’t know her from Adam, but I do know this: when it comes to procreation, women age in dog years and men in human years.

My mother became a grandmother at 51, not much beyond the age at which Rachel Weisz is having her baby (or ‘little human’, as she called it).

When I was 25, my mother said to me: ‘It’s all very well having a career, darling. But you mustn’t forget a husband and children!’

Rachel Weisz is having a baby with James Bond at the age of 48. I’m very pleased for her, and also for the new father-to-be Daniel Craig, 50

I grew up being instructed at every turn that, after the age of 35, women were biologically extinct, while men improved with age, like some full-bodied claret in the mouldy cellar of a French chateau.

Which is why, six months after my mother’s little lecture, I found myself married and pregnant (actually, not in that order). And 14 months after the birth I shuffled back into the labour ward at St Mary’s Hospital, Paddington, and a midwife recognised me. ‘Back so soon!’ she quipped. I had three under four (I think, it’s all a blur).

If I had to choose, though, between being a fast breeding machine in my 20s or 30s (the Duchess of Cambridge is the one to beat here) or having an autumn crocus like Rachel, there’s no contest. I could no more have a baby now than I could run the London Marathon in ski boots.

OK, well with a lot of money and intervention I could, and if Daniel Craig asked me while emerging from the briny wearing those tight blue swim trunks, the thought might cross my mind – but I would dismiss it with a light laugh.

‘I’m far too old, James!’ I would answer, possibly taking off my Miss Moneypenny glasses and tossing my mane girlishly. (I am older than my mother was when she became a grandmother.)

And I felt a real pang of granny envy when I read yesterday that ‘socialite’ (I never know what that means) Tamara Beckwith is becoming a grandmother at 48 – ie the same age as Rachel Weisz. 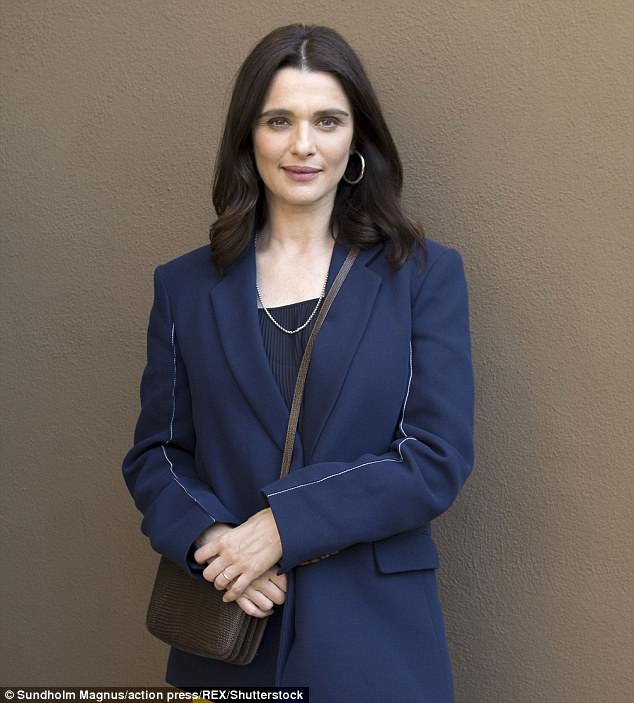 Rachel and Daniel’s baby wouldn’t work for me – too tired and I’ve been there and done that. But it will for them. Congratulations

Whenever I see my daughter – in fact any of my adult children – I say to them ‘Just hurry up, will you, and don’t worry about who’s going to look after them. Granny will’, and I almost mean it.

Grandchildren? All day long. Can’t wait. But a baby? Now? Shudder. I enjoy being almost the same age as my own parents (Boris and my father Stanley are always being mistaken for each other, not surprising as they look identical and are just over two decades apart. This is way more popular with Stanley than Boris). It means we are, and always have been, close in every way.

BUT I also recognise this, and never more so than last week: age may shrivel us, we go on and on about age and gender gaps, and women still have to watch the clock when it comes to children – but age never withers the bond between parent and child, between mother and son. However great or small, it is imperishable.

We all felt this when we watched the Queen, in glittering tiara and ivory gown, asking the dozens of world leaders gathered at her house to hand over her role as head of the Commonwealth to her firstborn son and heir, Charles.

The role is not hereditary, but just as Willow is a descendant of the Queen’s first corgi, Susan, Her Majesty was clearly mustard-keen for the bloodline to continue. She expressed the fervent wish that ‘the Prince of Wales will carry on the important work started by my father in 1949’.

It was a tender message as she passed the baton, that she thinks so highly of her son that she will gift him the headship of 53 nations – a very regal, if I might say so, way of expressing the closeness of the bond between them, even at their respective ages of 92 and 69 (if I could do the same for my three, I would).

Rachel and Daniel’s baby wouldn’t work for me – too tired and I’ve been there and done that. But it will for them. Congratulations.

Tammie Jo Shults, the former fighter pilot with nerves of tungsten who landed that Southwest Airlines plane, is my top Top Gal.

After her consummate handling of a hairy mid-flight crisis, I predict a rush of young women wanting their ‘wings’ to be on their navy pilot jackets rather than on their sanitary pads, and a vogue for female aviation unseen since the glory days of Amy Johnson. 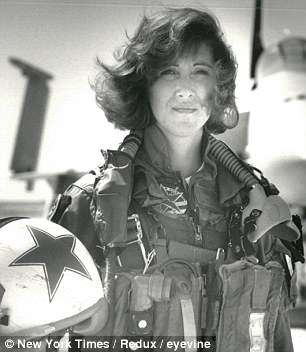 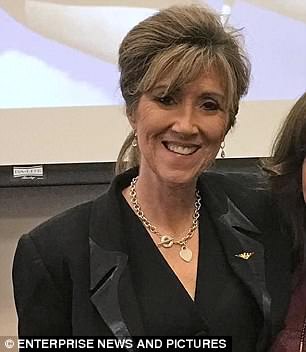 Tammie Jo Shults, the former fighter pilot with nerves of tungsten who landed that Southwest Airlines plane, is my top Top Gal. Pictured: right, in her Navy days, and today

I am keeping a blacklist of the many British grandees who campaigned loudly for Leave while maintaining residences or living abroad (you know who you are, Lords Lawson and Ashcroft). But the revelation that the children of the man most responsible for our rupture with the EU hold German passports is a shocker. Honestly! So my kids have to marry the spawn of Nigel Farage to regain their European birthright and the freedom to work and play in 27 countries. Brexit – verily the gift that keeps on giving.

As we enter the build-up to the big day, it strikes me that Meghan must invite her rellies to Windsor – even though her half-brother and sister have given her every reason to leave them off the guest list. Happily ever after is a fairy tale for only half of married couples. This means Meghan may not always be Royal – but she will always be Markle. FedEx those stiffies to the US post-haste.