A black British woman who was racially abused by a Booking.com host has called the American property owner ‘disgusting’ and said: ‘It’s not safe for people to stay in her property’.

Monifah Brown, a 24-year-old event planner from London, said the ongoing racist tirade from Giulia Ozyesilpinar has ‘made me feel horrible’ and left her unable to eat or sleep properly.

Ozyesilpinar, who called Miss Brown the N-word during an exchange on Booking.com, has refused to back down and told her today: ‘Thank you, you’ve made me famous, monkey’.

The American has also targeted the Londoner’s young child by sending a WhatsApp picture of a gorilla carrying its baby with the message: ‘Aw, you and your daughter’.

Miss Brown had approached Ozyesilpinar through Booking.com about renting a flat in her ‘Ocean Five Condo Hotel’ on Ocean Drive, Miami, for three months in September.

But the owner accused Miss Brown of trying to use a stolen credit card to secure the booking – a claim she denies – and then sent a tirade of racist abuse on WhatsApp. 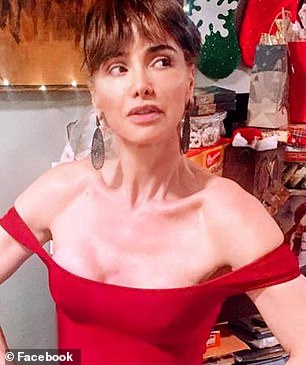 Monifah Brown, a 24-year-old event planner from London, had been planning to rent out Giulia Ozyesilpinar’s ‘Ocean Five Condo Hotel’ in Miami before the owner turned nasty 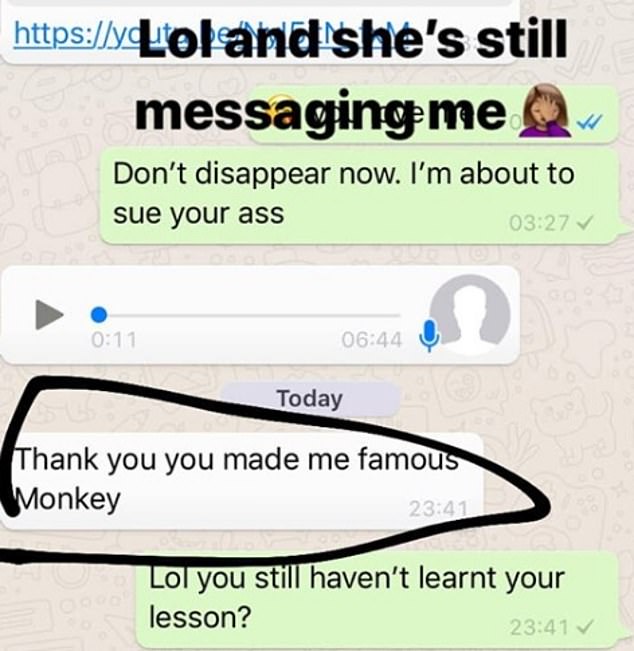 Miss Brown, a 24-year-old event planner, has revealed Giulia’s WhatsApp tirade hasn’t stopped with the condo owner saying: ‘Thank you you made me famous monkey’

Hitting back today, Miss Brown – who plans to sue the American – said: ‘It’s just disgusting. She’s said she’s allowed to be racist because of free speech – I can’t believe people have that mentality in this day and age.

‘I came to her to provide her with business, nothing else. Bringing Ava into it was vile.

‘This has made me so angry. I haven’t been able to eat or sleep properly in days. It’s made me feel horrible.’

‘She can’t see why her actions are racist. That just shows how ignorant she is. I don’t think it’s safe for people to stay in her property.’

Miss Brown went on to link the racist abuse to the U.S. President, saying: ‘This mentality 100 per cent stems from Donald Trump.

‘He has made it possible for people to say racist things and claim it is freedom of speech.

‘He is very open with what he says – he has no filter, so some people feel like they can say things like that too and get away with it.’

According to the messages posted online, Ozyesilpinar repeatedly called her a ‘n****r’ and a ‘monkey’ while also asking if the event planner was a ‘prostitute.’

Her victim then shared the taunts on Facebook and Ozyesilpinar was confronted by her local newspaper, the Miami New Times, who she told: ‘Being racist is not illegal’, adding: ‘We live in a free world. We have freedom of speech. If I want to call somebody a monkey, I should be able to say that.’

Today Ozyesilpinar’s abusive messages appear to have continued, with curses including: ‘You want that banana, Africa?’, ‘Monkey know what tree to climb’ and ‘you are not a monkey you are an orangutan’ sent across the Atlantic.

Miss Brown responded: ‘You are making things worse Giulia. The world has seen you for the racist you are’. 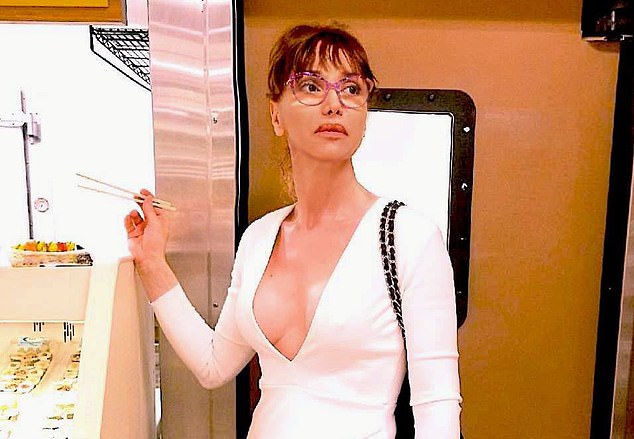 Ozyesilpinar, who called Miss Brown the N-word during an exchange on Booking.com, has refused to back down

The condo owner has been booted off Airbnb and Booking.com after she launched into a racist tirade – and it has been claimed she briefly wrote owner n****r under a series negative Google reviews of her property before being deleted.

Brown took to her social media to share screenshots and video of their bizarre exchange, which started pleasantly on WhatsApp on June 16 with Ozyesilpinar requesting the down payment.

The event planner asked for a breakdown of the payment before explaining that her group needed until June 28 – their payday – to pay the deposit. After Brown was told that the dates couldn’t be held, she offered to pay the full amount on June 28.

Ozyesilpinar seemed confused by what Brown was asking, however, and early on was under the impression that the 24-year-old was trying to pay for the trip on multiple cards.

Brown quickly explained that that wasn’t the case and that they would be paying the full price but then the condo owner asserted: ‘One of you has a credit card, I am sure.’

Ozyesilpinar requested that Brown share her age and send over a copy of her driver’s license and email – which the event planner happily complied with. 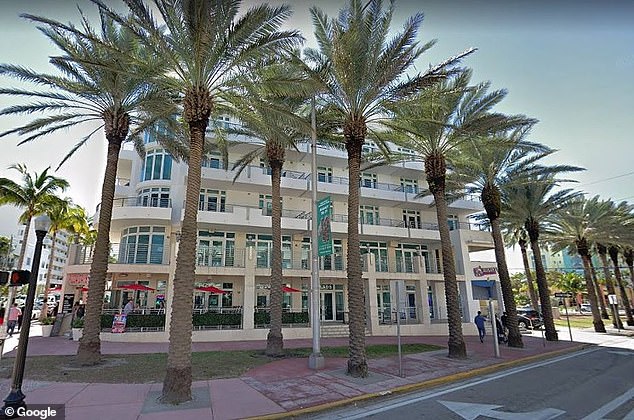 The exchange was mostly pleasant until June 21 when Ozyesilpinar sent Brown text messages about her credit card but was unable to reach her.

‘Are you there or are you acting like you are ignoring me,’ she said in the messages.

‘You acting with lies gives a very very bad picture for all of the black people. Please try to act like a lady and be a very good representation of black.’ 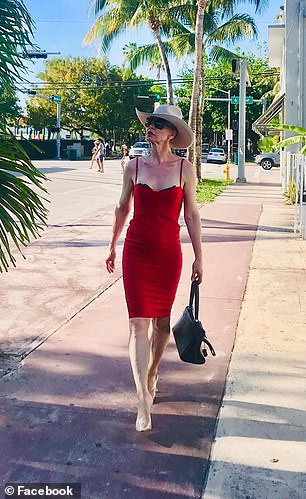 Brown eventually responded on Friday and informed Ozyesilpinar that she had been ‘setting up a venue from 6am,’ too busy to check her WhatsApp.

‘After your recent racist messages that you text to my phone, I now no longer feel comfortable staying in your property’ she stated. ‘Thank you so much for showing your true colors. I suggest next time you learn to have some class like this ‘black woman’ racist b***h.’

Brown laughed at the behavior, telling Ozyesilpinar that she was sending the info to Booking.com and Airbnb. The owner told her to ‘shut your monkey mouth.’

Ozyesilpinar then appeared to send audio recordings to Brown, appearing to growl at Brown and call her a ‘n****r’ while making monkey noises at her.

Brown sent her own audio recording laughing at the racist attitude and for going viral.

The condo owner also allegedly sent Brown two YouTube videos that were supposed to show what African monkeys sound like.

Booking.com eventually removed the condo from its website after Brown and her friend’s post of the incident went viral. 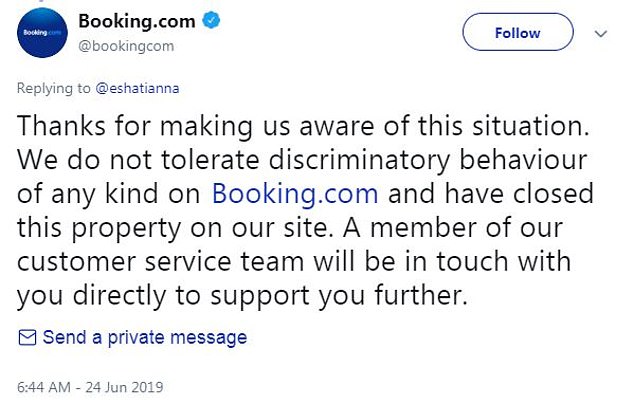 Booking.com eventually removed the condo from its website after Brown and her friend’s post of the incident went viral 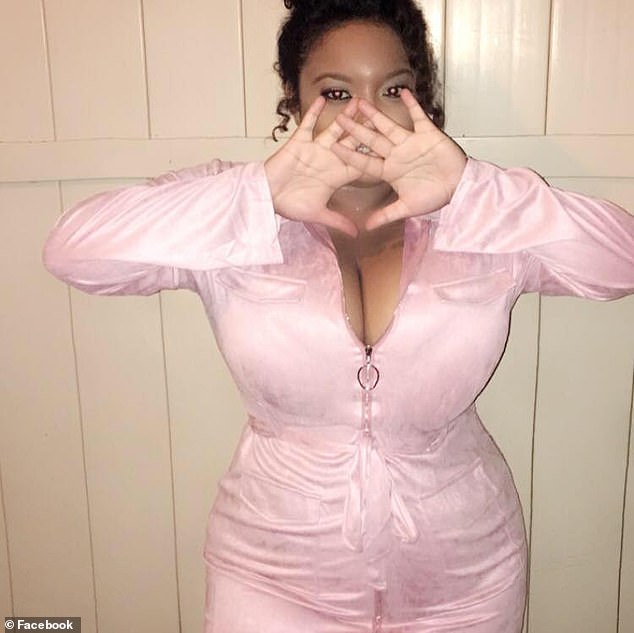 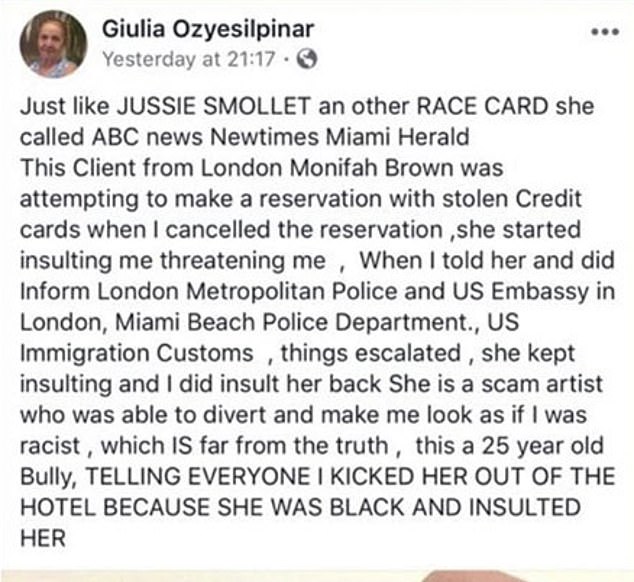 ‘Thanks for making us aware of this situation. We do not tolerate discriminatory behaviour of any kind on Booking.com and have closed this property on our site,’ they said on Twitter. ‘A member of our customer service team will be in touch with you directly to support you further.’

Reviews listed on Google soon began calling the owner out for her behavior but someone apparently posting as the owner then responded under the post saying ‘n****r.’ Those have since been deleted.

Ozyesilpinar posted Brown’s driver’s license to Facebook and equated her to being ‘like Jussie Smollett and other race card’ pullers.

She also claimed that Brown was trying to pay for the reservations on a stolen credit card.

She claimed that Brown harassed her first before adding that she has black friends and voted for Hillary Clinton.