Radiotherapy administered inside the body for 30 minutes can treat breast cancer, study says

A 30-minute dose of radiotherapy administered inside the body is as effective for early breast cancer as conventional therapy lasting up to six weeks, a landmark study has revealed.

The treatment – known as targeted intraoperative radiotherapy (TARGIT-IORT) – did not affect patients chances of survival or risk of cancer returning compared to another common treatment.

It works through a small ball-shaped ‘intrabeam’ device which is placed into the affected breast after surgery.

Available on the NHS since 2018, many doctors have been holding back from prescribing it as they awaited further research.

A 30-minute treatment is just as effective for early breast cancer as conventional therapy lasting up to six weeks, a landmark study has revealed. Pictured: Stock of a mammogram

The research was led by the inventors of TARGIT-IORT – Jayant S Vaidya, Jeffrey S Tobias and Michael Baum, from University College London.

They made the find after monitoring 2,298 women aged 45 and over who were eligible for breast conversion surgery in the UK, Australia, US and seven other countries.

Half were treated with the traditional external beam radiotherapy (EBRT) – where patients are required to make repeated visits to the hospital so that a laser can be fired at their breast.

And half were treated with a single dose of targeted intraoperative radiotherapy (TARGIT-IORT).

Targeted intraoperative radiotherapy (TARGIT-IORT) works through a small ball-shaped ‘intrabeam’ device which is placed into the affected breast after surgery.

The small applicator is positioned precisely within the breast cavity, at the site of tumour, using meticulously placed sutures, according to the developers from University College London writing on the website TARGIT.

It allows the doctors to deliver a focused dose of radiotherapy into the space where the breast cancer had been.

So one benefit of the treatment is that it avoids radiation to the skin and other healthy tissues such as the heart and lungs.

The TARGIT technique and the Intrabeam device was developed by clinical academics at University College London in 1998 in collaboration with the manufacturers.

The single dose treatment is given over about 25 minutes, the applicator then is removed and skin closed.

TARGIT-IORT is the combination of targeted radiotherapy restricted to the area around the tumour given immediately after surgery.

The women, who were all in the early stages of breast cancer, were then monitored for five years to see if they faced different outcomes.

The results, published in the British Medical Journal, revealed that the methods had outcomes with no ‘clinically significant’ differences, despite the variation in treatment times.

TARGIT-IORT was linked with around an 80 per cent chance of avoiding a full course, fewer side effects and no difference in survival or likelihood of the cancer returning.

After five years of monitoring, the local recurrence risk was 2.11 per cent for TARGIT-IORT compared with 0.95 per cent for EBRT.

But the difference of 1.16 per cent was not considered clinically significant, the authors said, which means it could have just been by chance.

The team also found that in the five years after surgery, there were 13 additional local recurrences for TARGIT-IORT compared with EBRT. 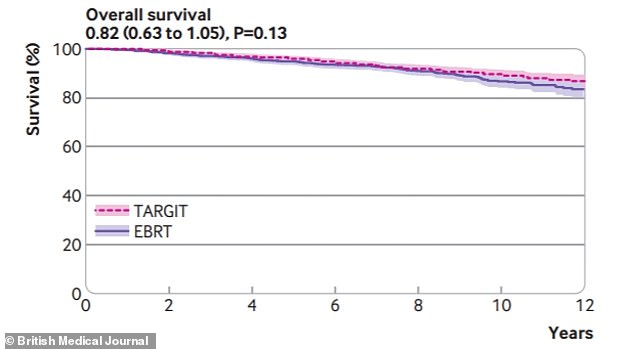 Researchers said that over a longer follow-up period – averaging 8.6 years – there were no major differences in the recurrence-free survival, mastectomy-free survival, overall survival and breast cancer deaths between the treatment groups.

Patients also suffered fewer side effects, but the results were not detailed in the paper. It may have been as a result of having one singular treatment rather than a course.

Researchers said the single dose of targeted radiotherapy during surgery could replace the need for extra hospital visits as part of a regular course.

Jayant Vaidya, lead author of the study, told The Times that this is ‘good news’ as there is ‘less pain, a better cosmetic outcome and better quality of life’.

‘With (the method), women can have their surgery and radiation treatment for breast cancer at the same time.’

Researchers said that for a large proportion of early breast cancer patients, the treatment is an effective alternative to EBRT.

They added that single-dose TARGIT-IORT during lumpectomy ‘should be accessible to healthcare providers and discussed with patients when surgery for breast cancer is being planned’.

The treatment is currently only available at a small number of NHS clinics.

They study was a randomised design, had a large sample size, a long duration and adherence to follow-up, which the team said made their findings ‘reliable and robust’.

But they added there were limitations affecting the results, such as the possible over-diagnosis of non-invasive local recurrence, and not collecting all the background risk factors for deaths from non-breast cancer causes.

Breast cancer is the most commonly occurring cancer in women and the second most common cancer overall.

There were over two million new cases in 2018, according to the World Cancer Research Fund.

One in seven women in the UK develop breast cancer during their lifetime, and most (around 98 per cent) will survive their cancer for five years or more after diagnosis.