RAF airman, 23, who vanished after night out in 2016 ‘died in the back of dustbin lorry’

Missing RAF airman Corrie McKeague is believed to have died in the back of a dustbin lorry after climbing into a Greggs industrial bin while drunk, an inquest has heard.

Mr McKeague, of Dunfermline, Fife, was 23 when he vanished in the early hours of September 24, 2016 after a night out in Bury St Edmunds, Suffolk.

No trace of him has been found but Suffolk’s senior coroner, Nigel Parsley, said Mr McKeague ‘died in the Suffolk jurisdiction in September 2016’.

The hearing in Ipswich was opened and adjourned on Friday.

Marina Ericson, Temporary Chief Superintendent of Suffolk Police, told the hearing it is believed that Mr McKeague climbed into a bin which was emptied into a waste lorry where he subsequently died.

She said Mr McKeague drove into Bury St Edmunds on the evening of Friday September 23 2016 and met up with RAF colleagues to go drinking and socialising.

‘Witnesses state that Corrie consumed so much alcohol through the evening that he became very drunk and was asked to leave Flex nightclub,’ she said.

‘Witnesses also described him as being happy and friendly throughout the evening.’

Mr McKeague was last seen alive at 3.25am, on CCTV footage, entering a horseshoe-shaped area in Brentgovel Street, behind a Superdrug and a Greggs shop, where there are several industrial waste bins.

Ms Ericson said a Biffa waste lorry emptied the Greggs bin at 4.19am, and the bin was recorded as weighing 116kg (18st 3lb).

‘Corrie’s mobile phone, having connected to the internet, provided a signal from this point which mapped the movements of the waste lorry to the Barton Mills roundabout.

‘At that point, the mobile service provider lost the signal.’

Mr McKeague was reported missing at 3.42pm on Monday September 26 by colleagues at RAF Honington.

Ms Ericson went on: ‘Despite an extensive police-led investigation and search, there has been no proof of life since the last sighting of Corrie at 3.25am on Saturday September 24 2016. 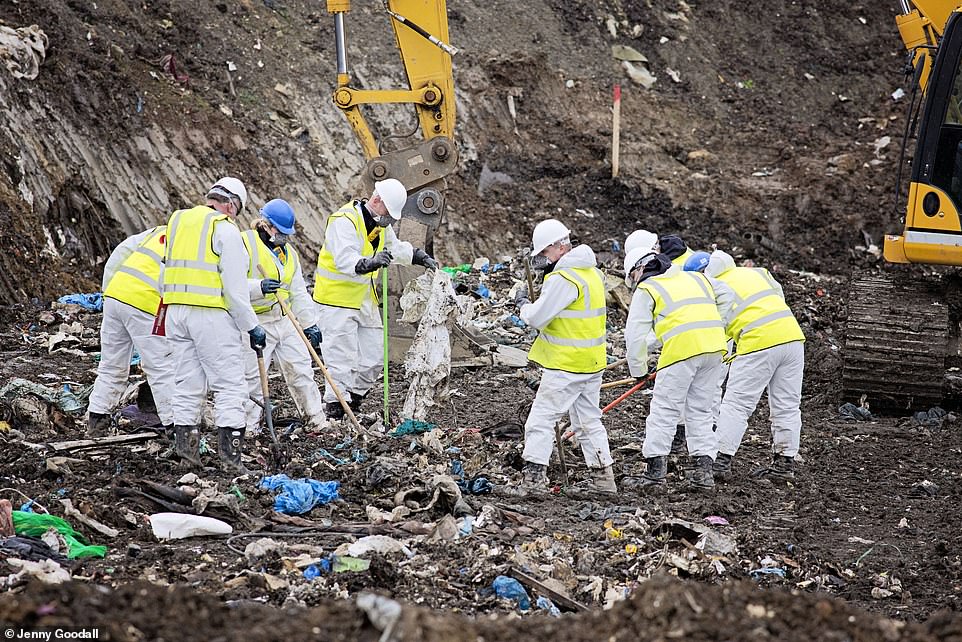 Despite a multi-million pound search operation which included two landfill sites the serviceman’s body has never been found. Pictured, officials search a landfill site near Cambridge

‘It is believed that Corrie, having climbed into the Greggs waste bin located in the area of the horseshoe in Brentgovel Street, was in the bin when it was emptied into the Biffa waste lorry and this is where he subsequently died.’

The coroner said: ‘On the basis of the evidence I’ve heard I will open an inquest into Corrie’s tragic death.’

A pre-inquest review hearing will take place on February 5.

At this hearing, consideration will be given to witnesses and the length and date of the full inquest hearing. 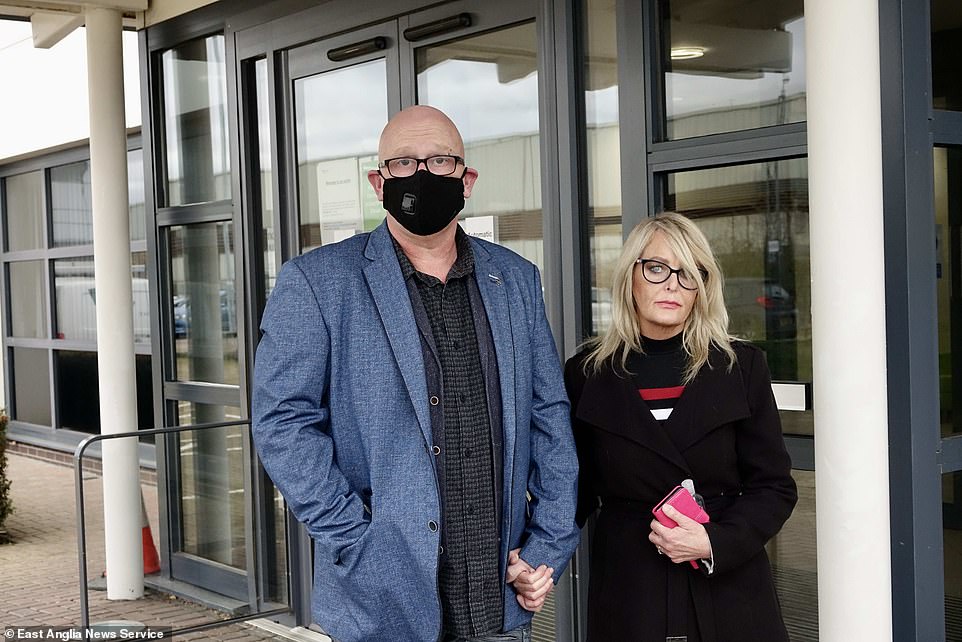 Martin McKeague, the father of missing airman Corrie McKeague, pictured with his wife Trisha outside the opening of the inquest

Mr McKeague’s mother, Nicola Urquhart, listened to proceedings remotely, while his father, Martin McKeague, and his wife, Trisha, attended the hearing in person after driving down from their home in Scotland.

Ms Urquhart previously said she had asked for an inquest for her son and was ‘extremely hopeful that this will give us answers’.

Martin McKeague said after Friday’s hearing: ‘This will put the truth out to the public. 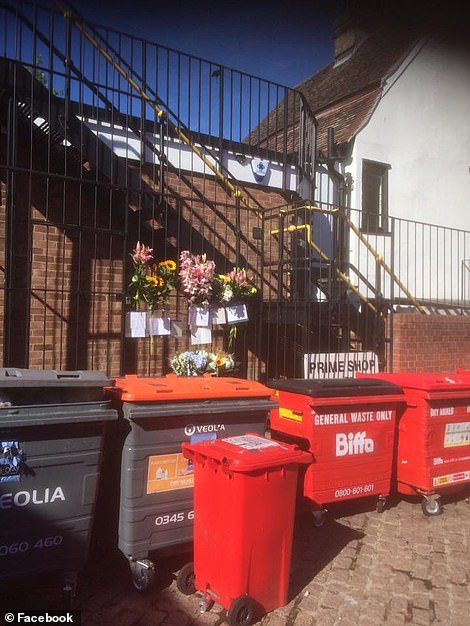 Ms Ericson said a Biffa waste lorry emptied the Greggs bin at 4.19am, and the bin was recorded as weighing 116kg (18st 3lb)

‘There’s no mystery. We’re not finding out any new news here.’

He said his son went into the bin, adding: ‘The facts and evidence that we’ve been presented with tell us that’s what happened to him.’

Despite a multi-million pound search operation which included two landfill sites the serviceman’s body has never been found. A Find Corrie page run on Facebook by his policewoman mother has 106,000 followers.

Chief Supt Marina Ericson, the county policing commander for Suffolk, gave a statement on behalf of Operation Phonetic which she described as ‘the investigation into the disappearance and subsequent death of Corrie McKeague.’

She said: ‘Corrie was born on 16th September 1993 in Scotland. He was one of three boys, his family consisting of his mother Nicola Urquhart, his father Martin McKeague and his two brothers, Darroch and Makeyan.

‘Corrie had served in the RAF for three years, and at the time of his death was based in RAF Honington, Suffolk.

‘On the evening of Friday 23rd September 2016, Corrie drove his car into Bury St Edmunds where he subsequently met up with some of his RAF colleagues to go drinking and socialising.

‘Witnesses state that Corrie consumed so much alcohol during the evening, he became very drunk and was asked to leave Flex nightclub. Witnesses also described him as being happy and friendly throughout the night.

‘At 03.25 hrs Corrie entered a ‘horseshoe’ shaped area in Brentgovel Street behind Superdrug and Greggs the bakers. Located in the area are several industrial waste bins. 03.25 hrs was the last time Corrie was seen and known to be alive. 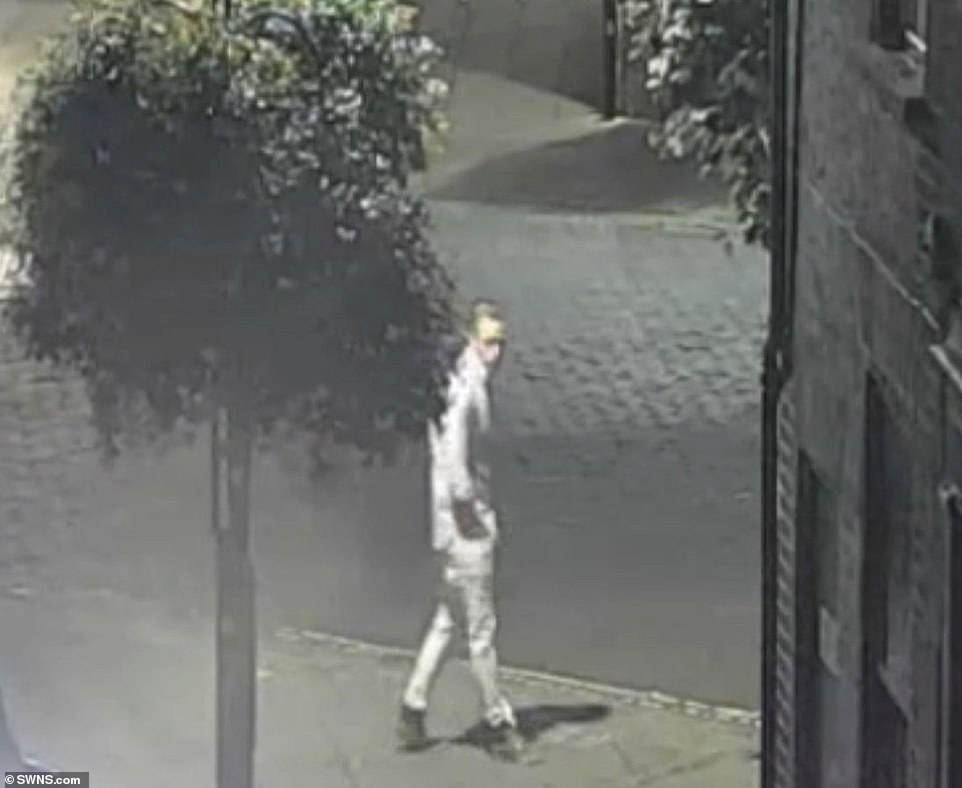 Despite a multi-million pound search operation which included two landfill sites the serviceman’s body has never been found. Pictured: The last sighting of Mr McKeague on CCTV

‘A Biffa waste lorry, making its waste collections, drove into this area at 04.19hrs and emptied the Greggs waste bin. The bin weighed 116kg, approximately 70-80kg more than its average

‘Corrie’s mobile phone, having connected to the internet, provided a signal, which from this point, mapped the movements of the waste lorry to the Barton Mills roundabout. At that point the mobile service provider lost the signal. 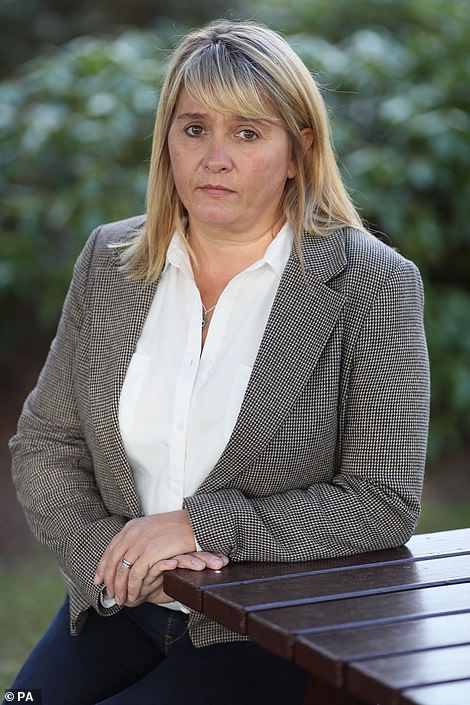 ‘At 15.42 hrs on Monday 26th September, Corrie was reported missing by his colleagues at RAF Honington.

‘Despite an extensive police-led investigation and search, there has been no proof of life since the last sighting of Corrie at 03.25hrs on Saturday 24th September, 2016.

‘It is believed that Corrie having climbed into the Greggs waste bin located in the area of the ‘Horseshoe’, Brentogvel Street, was in the bin when it was emptied into the Biffa waste lorry, and this is where he subsequently died.’

He added: ‘I would like to pass my sincere condolences to Corrie’s parents Nicola and Martin and the rest of his family and friends who lost him in such tragic circumstances.

‘On the basis of the evidence I have heard, I will open the inquest into Corrie’s tragic death.’

Mr Parsley adjourned the inquest to a pre-inquest hearing on February 5 next year which will discuss the evidence to be admitted and the witnesses required.

Mr McKeague said after the hearing that he believed his son had died after going into the bin lorry, and dismissed the numerous theories surrounding his disappearance.

He said: ‘I want to put the truth out to the public. There is no mystery. The evidence that we have been presented with by the police is what happened to him. I want everyone to get to know the truth.’

Mr McKeague added that he and the police had wanted the full inquest to have been held in 2018. 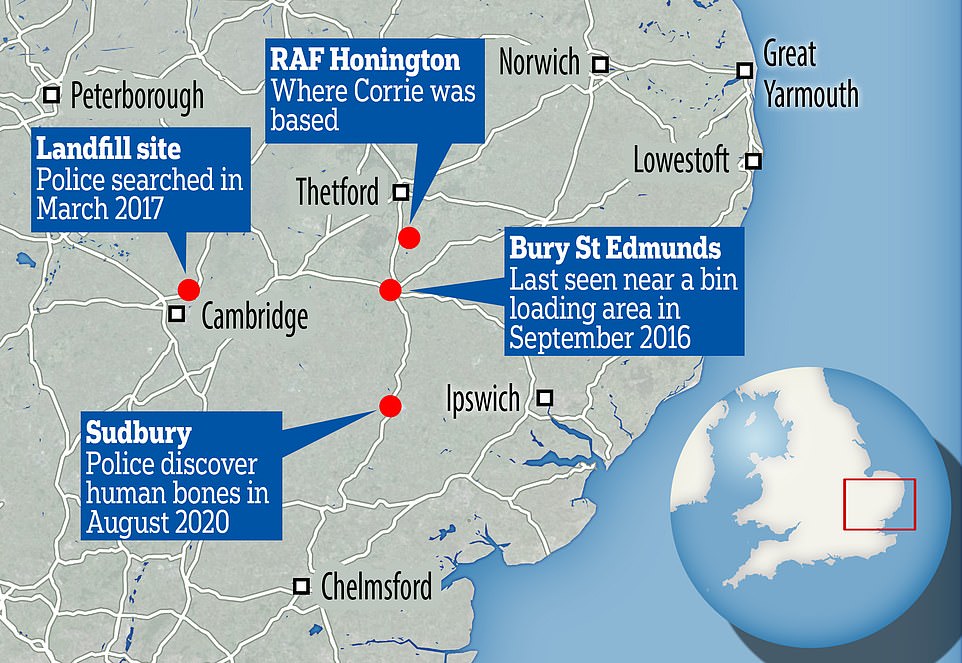 Corrie McKeague was last seen near a bin loading area in Bury St Edmunds in 2016. Police searched a landfill site near Cambridge for his body in March the following year

Police carried out two searches of a 120 acre landfill site at Milton, Cambridgeshire, over 27 weeks in 2017, but found no sign of Corrie’s body after sifting through 9,000 tons of rubbish.

Corrie was last seen asleep in a shop doorway on the night he disappeared after picking up a takeaway. CCTV later showed him walking towards the area containing the Greggs bin.

Police quickly realised that the movement of his mobile phone signal matched that of the bin lorry which had picked up the contents of the bin.

The signal stopped when the lorry reached the Barton Mills area 14 miles away.

The rubbish was taken to a transfer station at Red Lodge. Records suggest it then went to the Milton landfill site, but police have not discounted it being taken elsewhere.

The lorry was impounded, but no forensic clues linking it to Corrie were found. CCTV cameras also failed to capture images of him leaving the bin area on foot.

Bin lorry operator Biffa initially wrongly stated that records showed the wheelie bin behind Greggs had only contained around 11kgs of waste.

Officers repeatedly asked for the calculation to be checked and Biffa later admitted that it had made a mistake and the bin contained 116kgs – enough to include a body.

Corrie’s girlfriend April Oliver, then 21, found out that she was pregnant with his child after he disappeared and later gave birth to his daughter Ellie-Louise.

Craig Knightley of law firm Tees Law, representing Mrs Urquhart, said: ‘Corrie’s mother wishes to ensure that all the right questions are asked and answered as fully as possible at the inquest scheduled to be undertaken at Ipswich Coroner’s Court early next year.

‘The inquest will be an ideal opportunity to bring together the various strands of investigation and Tees Law will be supporting the family throughout what will be an emotional, but we hope fruitful, process for them.

‘We shall be doing our utmost to assist the investigation in exploring every aspect of this tragic mystery, so that all relevant circumstances are put before the Coroner to enable important conclusions to be drawn.’

The serviceman’s mother Ms Urquhart has long campaigned for a formal inquest into the circumstances of his presumed death to be held.

However she has said that she is not looking for closure and is still struggling to deal with the fact that he has died.

Just last month, she told a local newspaper: ‘I’m never going to get answers that are going to make that any easier to deal with.

On November 5 the Chief Coroner of England Wales confirmed that he had directed that an inquest be held.

A statement released by the Suffolk Coroner read: Following an application at the request of the family of Corrie McKeague, the Chief Coroner for England and Wales has directed the Senior Coroner for Suffolk to hold an inquest into Corrie’s death which there is reason to believe occurred on 24 September 2016.

‘A date for a short inquest opening hearing is yet to be finalised, but is expected to occur within the next two weeks.

‘A pre-inquest review hearing will be held early in 2021. The inquest itself will follow later in 2021.’

Corrie was last seen in a part of Bury St Edmunds, Suffolk, known as the ‘Horseshoe’ at 3.24am on Saturday, September 24, 2016 – around nine miles from his base at RAF Honington.

He has not been seen since and in October 2018 Suffolk Police said they believed his body was at a landfill site in Cambridgeshire.

Suffolk and Norfolk police spent 137 days looking for Corrie at the Milton tip and trawled through more than 7,000 tonnes of rubbish as part of a £2 million investigation into his disappearance.

Officers carried out two separate search operations in 2017 with the first being called off in July and the second resuming in October and lasting approximately six weeks.

Last year, on the third anniversary of his disappearance, mother Nicola said she accepted her son was dead – but said she hadn’t given up hope of finding his remains.