Chaos at the cricket! Raging Pakistan and Afghanistan fans fight and hurl metal barrier during violent clash at World Cup match at Headingley

Shocking footage shows Pakistan and Afghanistan cricket fans brawling outside Headingley today as their teams played each other in the Cricket World Cup.

Multiple people were involved in the fighting, with fans throwing punches and attacking each other with a metal barrier.

It is believed the violence was triggered after a plane flying the slogan ‘Justice for Balochistan’ was flown over the cricket ground in Leeds.

Balochistan is a region of south-west Asia, that is split between Pakistan, Iran and Afghanistan.

Baloch nationalists have long-battled with the Pakistan and Iran governments for independence.

A plane flew the slogan ‘Justice for Balochistan’ over the ground, which is thought to have prompted the violence

The region is rich in natural resources but is one of the poorest in Pakistan and insurgents have previously been supported by Afghanistan.

In the footage, a man is surrounded by several people who throw punches, bottles and kick him repeatedly.

One even throws a metal railing at the man.

Some of the attackers are dressed in Afghanistan cricket shirts.

Several people intervened and tried to break up the fight, though they didn’t appear to be very successful. 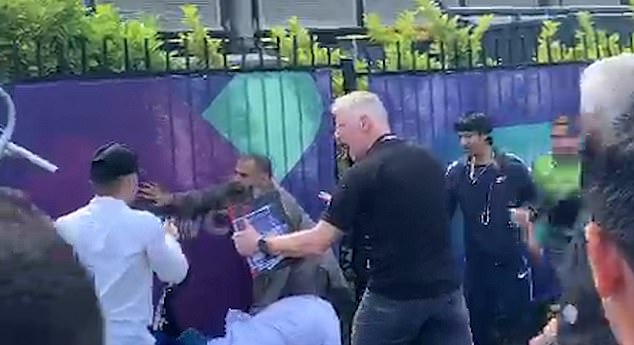 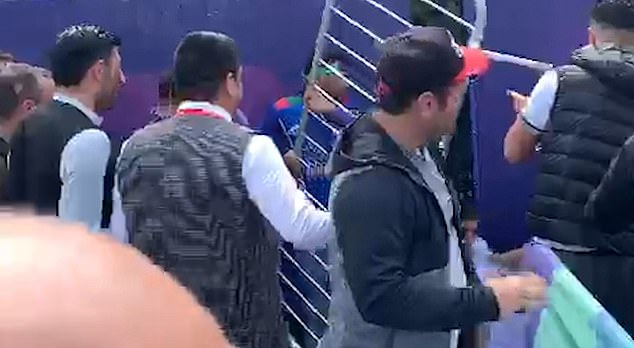 West Yorkshire Police are believed to have attended but no arrests or injuries were reported as the trouble was dispersed.

There are also claims that the violent scenes started soon after two supporters of Afghanistan were evicted from the stadium by security personnel for not having tickets.

Fans were seen jumping the boundary wall of the stadium to gain access to it.

The clashes are believed to have taken place in the Carnegie Pavilion Stand before fans were evicted.

Another video showed security fighting against fans who were trying to force open a stadium gate.