Railway cops tear a blind man’s cane from him, tackle him and fire pepper-spray in his face

‘Thought he’d George Floyd me’: Shocking moment railway cops tear a BLIND man’s cane from his hands, tackle him to the ground and fire pepper-spray in his face

Shocking footage captures the moment a blind man was pepper-sprayed and tackled to the ground after having his white cane ripped from his hand.

The 49-year old said he thought was going to die during the ordeal.

Mr Croft claims the scuffle began when he was spotted smoking a cigarette outside the station.

He said he overheard someone telling him to ‘butt it out’ but they did not identify themselves as transport officers.

The footage then began, showing transport officers screaming at Mr Croft, telling him he is under arrest for disorderly behaviour.

He was seen shielding his face as he walked away, but the officers followed him.

Mr Croft lashed out with the walking stick, swore at them and demanded they leave him alone.

He was then restrained with his arms behind his back as they brought him to the ground while a man filming pleaded for a bystander to call police.

His cane was snapped during the struggle.

But a spokesperson told The West the situation began before the footage started and officers were responding to reports of a disturbance on a Joondalup train. 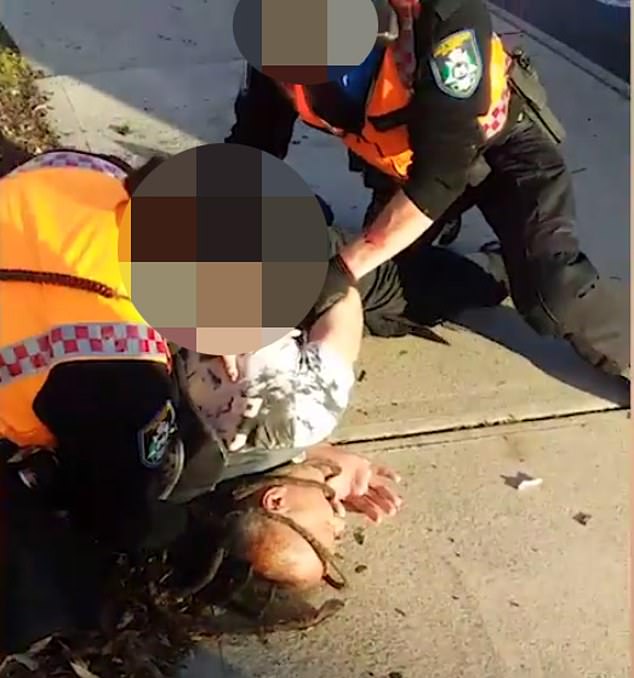 The transport authority said they were contacted about a man who was yelling and swearing, which frightened other passengers.

‘We do not tolerate antisocial behaviour on our network,’ the spokesperson said.

‘Any use of force by Transit officers is regrettable and should be a last resort,’ she said.

The Department of Transport is investigating the incident.