By Lawrence Booth At Bristol

As England pressed for victory in their one-off Test against India, two factors stood in their way: the weather and Shafali Verma, the 17-year-old wunderkind of women’s cricket.

While India’s men were watching the rain wash away the first day of the World Test Championship final against New Zealand in Southampton, their women were following on at gloomy Bristol, with Verma doing her best to light the place up.

When the third day’s play was abandoned at 5.30pm, the Indians were 83 for one in their second innings, and still trailed by 82. But Verma was on 55, including 11 fours, and playing like a dream. Throw in the 96 she made in the first innings, and she has scored more runs in her debut Test than all bar three women in history.

Therefore, there are now currently 108 overs scheduled to be played on Saturday instead

And yet it feels wrong to talk of her as a prodigy. She made her Indian debut aged 15, and already has a World Cup final under her belt. If the BCCI had the awareness to stage a woman’s IPL, she would be an instant idol.

Like all the best players, she appears to have extra time to play her strokes. Cover-drives are touched to the boundary, late cuts dabbed. She can bludgeon too, hammering seamer Kate Cross back over her head as if she were a spinner. If women’s Test cricket really is to undergo a renaissance – and this is only India’s 37th Test, 45 years after their first – then Verma will be central.

And India will need more heroics from her after the collapse that began on Thursday evening continued into Friday morning. From 167 without loss, they cascaded to 231 all out, with left-arm spinner Sophie Ecclestone taking three of the remaining five wickets to finish with four for 88. 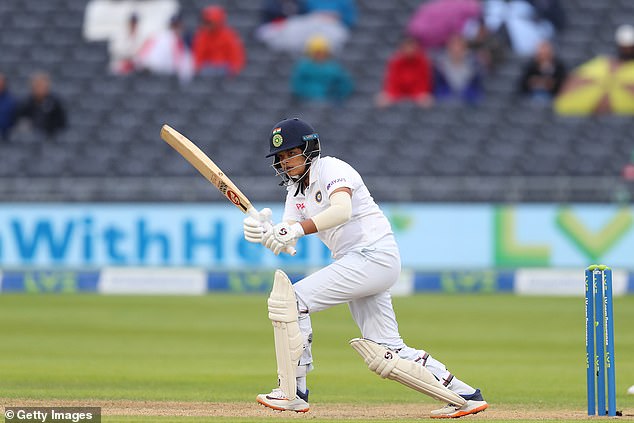 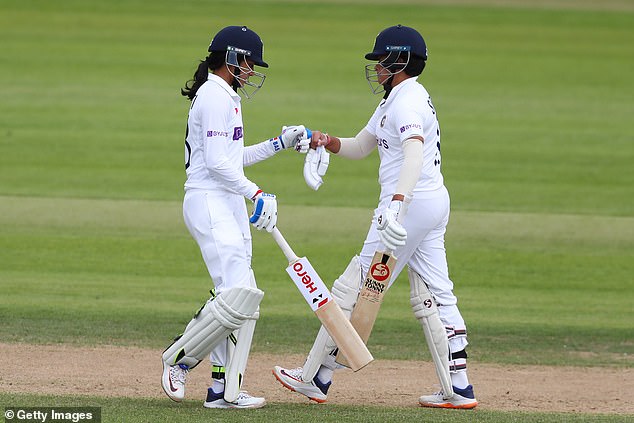 With rain in the air, Heather Knight enforced the follow-on, and Katherine Brunt quickly had Smriti Mandhana caught at second slip by Nat Sciver.

But Deepti Sharma, who had finished the first innings unbeaten on 29, was promoted from No 7 to No 3 and kept Verma stoic company, scoring one run from her first 45 balls before connecting with a few drives. By the premature close, she had batted throughout the day’s 45.5 overs, across two innings.

Despite that, Verma will be the prize wicket on the final day, with her battle against Ecclestone pitting the world’s No 1 T20 batter against its No 1 T20 bowler.

‘It’s always interesting when me and Shafali match up in whatever format of the game it is,’ said Ecclestone. ‘You never know what’s going to happen with her – whether you’re going to get whacked over the top, or she’s going to miss one. It’s quite a good competition for me. I don’t want her to win the battle. I try to get her out before she hits me for sixes.’

If Ecclestone wins the battle early, England will be well placed to claim victory and four crucial points in this multi-format series.