Britain is set for five days of rain as more than 90 flood warnings are put in place amid fears over power cuts and travel chaos.

Some parts of the country could face two inches of rain, less than a fortnight after parts of the Midlands and north of England were also soaked by floods.

Yellow weather warnings are in force after the rain started to fall in the South West overnight and the downpours are set to move north towards Scotland throughout the day.

In the East Midlands and North East the Met Office is warning that flooding is likely until midnight, as people continue the clean-up from the deluge earlier this month.

Nine flood warnings are in place throughout England, mainly in the South West and North East, alongside 85 less severe flood alerts as the country braces for a very wet weekend. Pictured is a car driving through floodwater in Clyst St Mary, Exeter

Met Office forecaster Greg Dewhurst said: ‘It’s a pretty unsettled start to the weekend, and a very cloudy day today, with heavy rain pushing its way north throughout the day.’

Nine flood warnings are in place throughout England on Saturday, mainly in the South West and North East, alongside 85 less severe flood alerts.

Firefighters in Devon and Cornwall warned drivers to stay away from flooded roads after a number of calls overnight to stranded cars.

Mr Dewhurst said other rainy areas could also see problems. He added: ‘Some places could see 40mm to 50 mm of rain. There’s quite a bit of rainfall to come in the next 24 hours.’ 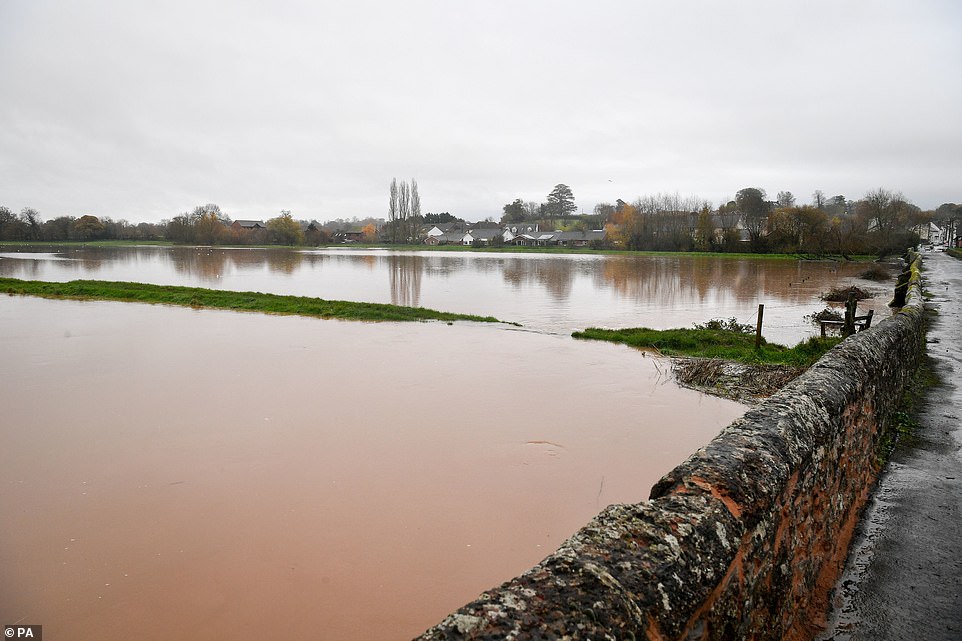 Some parts of the country could face two inches of rain on Saturday, less than a fortnight after parts of the Midlands and north of England were soaked by floods. Pictured is the River Clyst in Devon where rain has caused the river to burst its banks 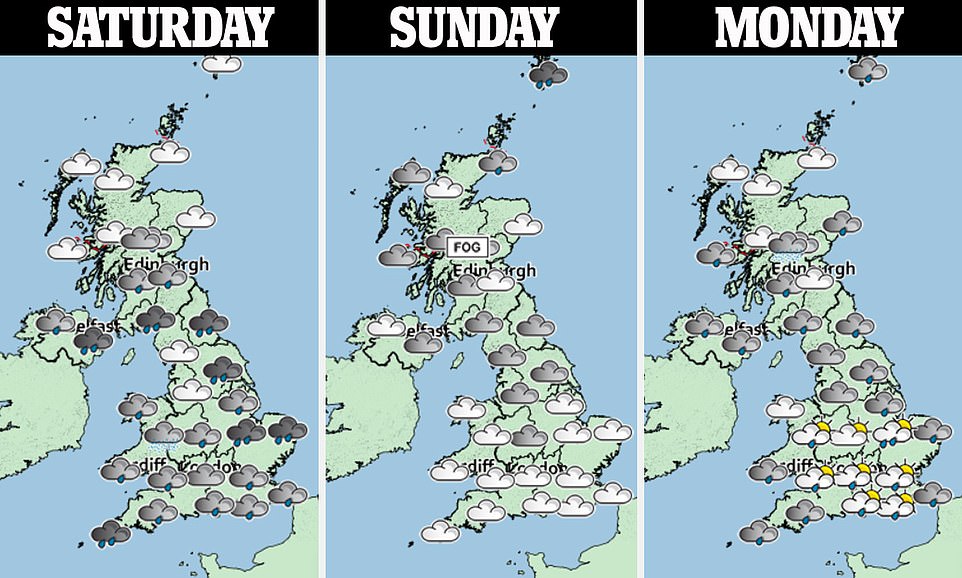 After days of biting winds and overnight frosts, parts of the country face the return of downpours and cloudy weather

High ground such as Dartmoor is expected to face having to cope with up to 50mm of rain by the time the downpours finally stop this afternoon- more than a third of the monthly average for November.

This afternoon parts of the Midlands and Northern England – the areas worst hit by flooding a fortnight ago – will come under a separate yellow warning as another 2ins of rain is threatened.

The downpours will be accompanied by strong winds across much of the country, bringing the likelihood of power cuts and travel disruption.

However there will be some relief from temperatures which even overnight will be at least 10C (50F) in many areas. 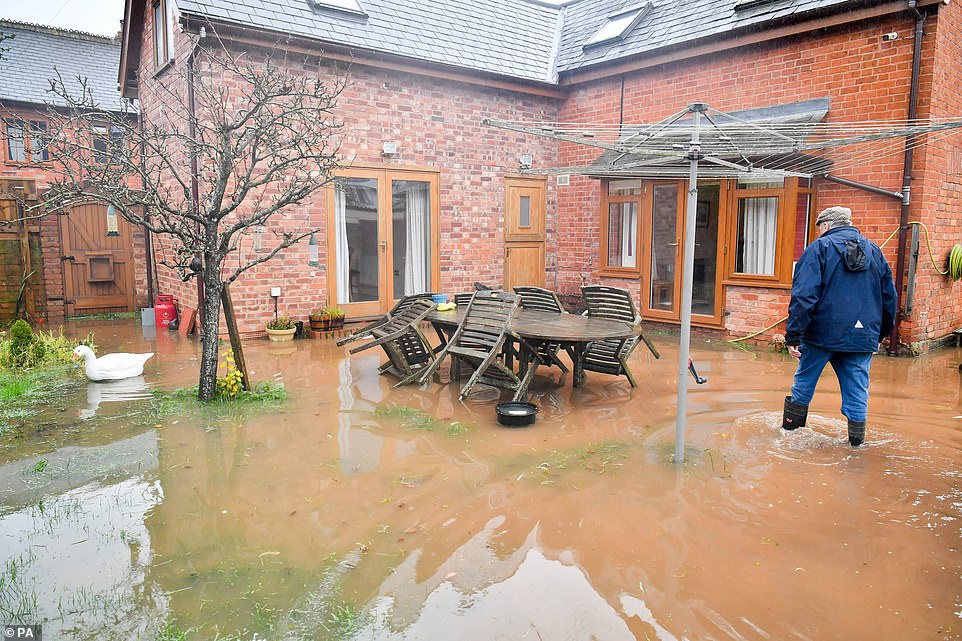 Dan Fitzsimons is seen walking through his flooded garden in Clyst St Mary, Exeter, where heavy rain has caused the river to burst its banks and run into the surrounding areas 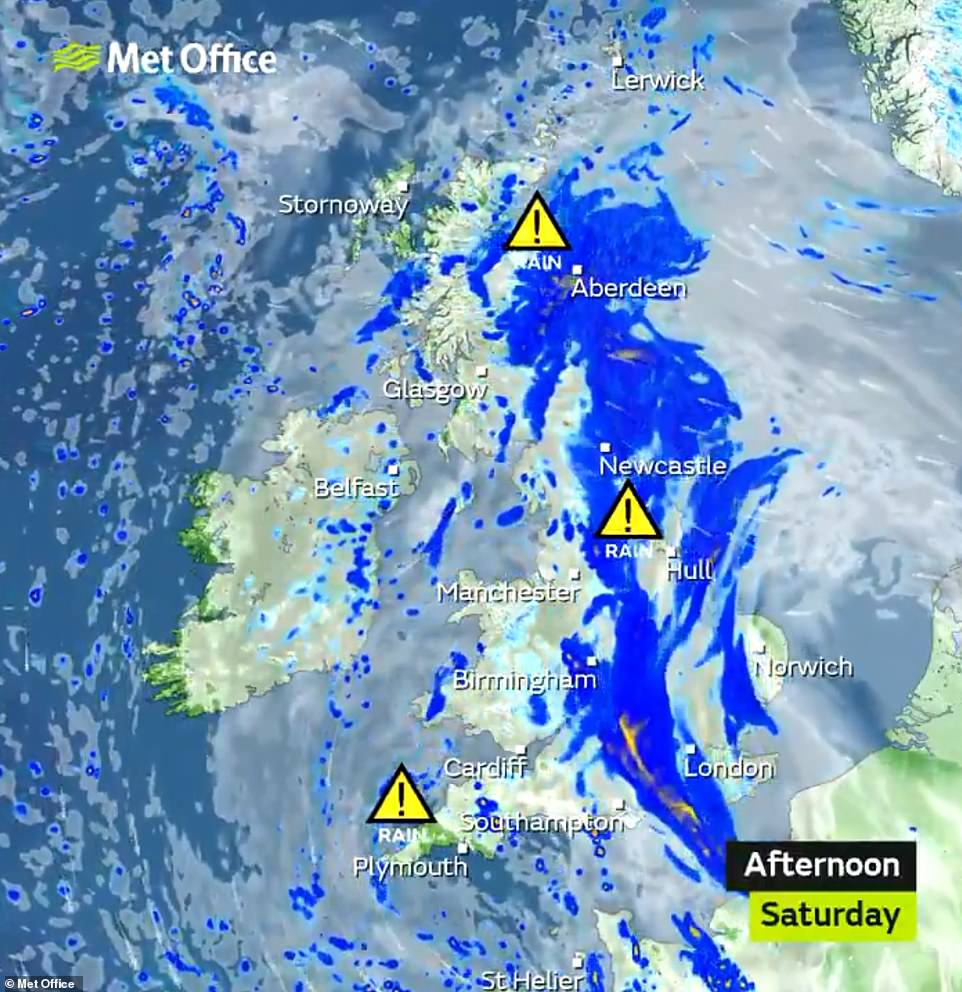 And despite heavy rain expected in some parts of the country, Wales, central and south-eastern England will escape the worst of the showers.

The wet weather is expected to subside slightly on Sunday. Two yellow weather warnings are in place for the east and north of Scotland until 9am on Sunday, but for most, the rain will have cleared.

Mr Dewhurst said: ‘On Sunday the rain will ease away. It’s looking like a much brighter day for many.’

Although the rain will be back for the start of next week, with downpours lasting for five days, reports the Mirror.

Earlier this month, the Army was called in to assist stricken communities after towns and villages around Doncaster and Sheffield and parts of the Midlands were drenched by heavy downpours.

Doncaster Council said 970 homes and businesses in the town were affected by the rain between November 7 and 15. 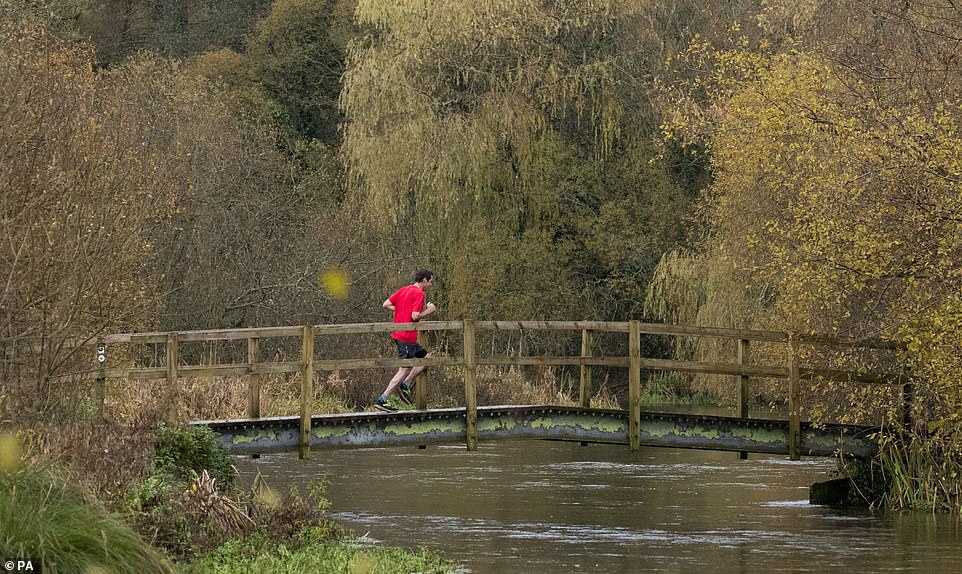 Met Office forecaster Mr Dewhurst said things are looking better for Sunday as some of the rain will ease away. Pictured is a man running over the river Itchen near to Ovington in Hampshire on Friday

The warnings came as two people died after a tree fell on their car in Gloucestershire on Thursday evening, with police saying the weather was a line of inquiry into the deaths.

Residents of areas around Doncaster such as the drowned village of Fishlake have barely begun cleaning up after floodwaters receded, with many residents discovering to their horror that their insurance policies did not cover flooding.

So far this month Nottinghamshire has seen the most rain of all UK counties compared with the average, having seen 189 per cent of its monthly average already. 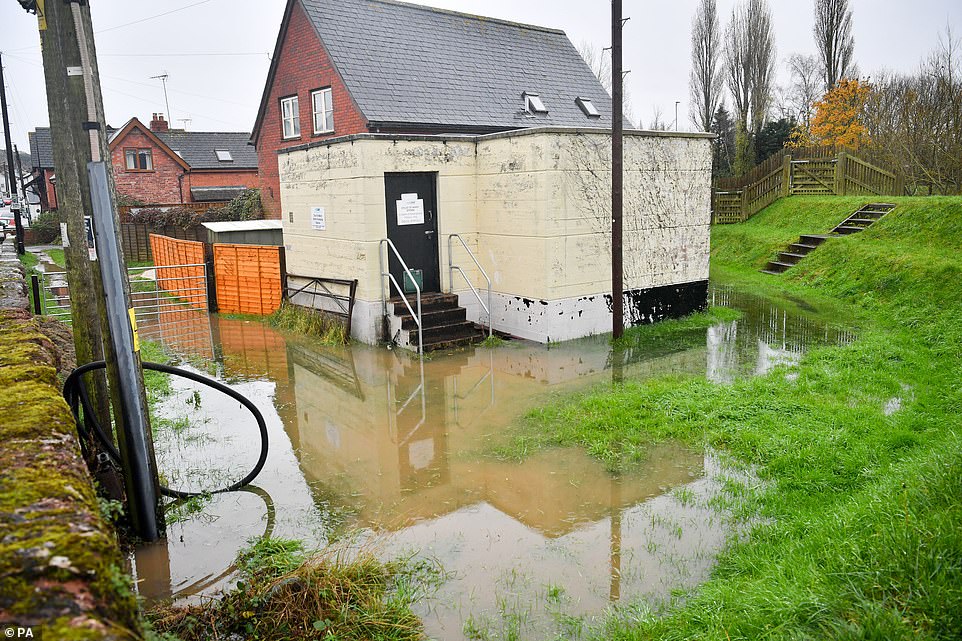 Tomorrow is not expected to see the same volume of rain, but the bad weather continues into next week. Pictured is flooding around the pumping station in Clyst St Mary, Exeter

Yesterday there were still 45 flood alerts and six flood warnings in place across England stretching from Cornwall to Scarborough.

Areas of the country not covered by weather warnings are expected to see cloudy, damp conditions today with temperatures feeling milder than in recent days.

Tomorrow is not expected to see the same volume of rain, but the unsettled weather continues into next week, bringing further spells of heavy rain.

However, the Met Office is currently predicting an area of high pressure building from around Iceland later in the week, bringing colder, drier conditions and a return of overnight frosts.