Rangers have launched an investigation and issued a statement of condemnation after a video on social media showed fans singing a racist song about Celtic striker Kyogo Furuhashi.

The video from a Rangers supporters’ bus emerged on Sunday, when the reigning champions won 4-2 at Ross County, and features racist chanting and figures making offensive eye gestures.

A Rangers spokesperson said: ‘Rangers condemns all forms of racism and discrimination. 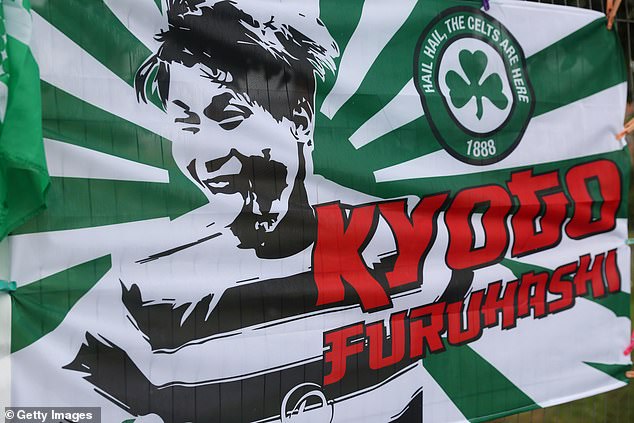 The Japan international has been an instant hit at Celtic, scoring five times since signing in July

‘Those who indulge in such behaviour are not representative of our club or the loyal support who have stood by us through thick and thin. We are currently investigating to identify the individuals involved.’

Celtic also voiced their disgust at the footage and pledged to support the 26-year-old Japan international.

The club tweeted: ‘If reports are accurate then such sickening and pathetic racist behaviour directed towards Kyogo Furuhashi deserves absolute condemnation.

‘As a club open to all, we stand firmly against racism in all its forms and we will give Kyogo our full support. All stakeholders must work together in tackling all forms of bigotry.’

In a later tweet, Celtic shared a photo of Furuhashi and added ‘we’ve got Kyogo doing his thing’ alongside a ‘no to racism’ hashtag.

Furuhashi has been in formidable form since joining Celtic from Vissel Kobe in July, hitting a hat-trick on his home debut against Dundee as part of a run of five goals in seven games so far this season. 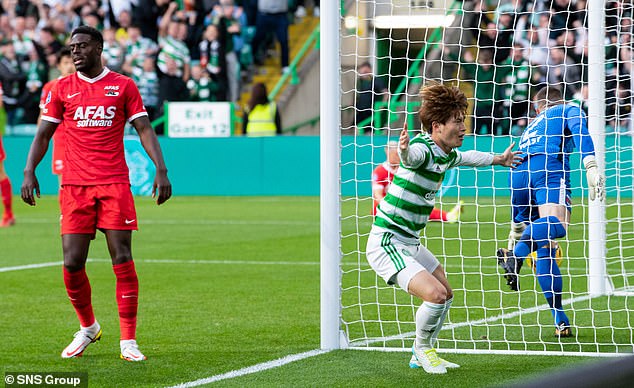 That treble has put Furuhashi joint top of the Scottish Premiership scoring charts, with his average of 49 minutes per goal being far quicker than any other player.

The prolific 26-year-old started the 6-0 win over St Mirren on Saturday and has also dazzled for Japan, making five appearances and scoring three times in World Cup qualification games this year.

Rangers host Celtic next Sunday in the first Old Firm game of the season, when no Hoops fans will be present because their arch-rivals could not confirm that they would match their provision for 700 away supporters.