The 22-year-old rapper was taken into custody in the early hours of the weekend after he and his entourage left an album release party and subsequently got into a confrontation with a cop after their vehicle was stopped.

According to TMZ, the performer was booked and charged with several offenses, including battery on a police officer and resisting an officer with violence, among numerous others.

The media outlet also reported that Polo G’s bail is currently set at $15,000.

Sources from law enforcement told TMZ that the alleged victim of the rapper’s attack was assaulted with elbows and suffered numerous lacerations to his face.

However, the media outlet was not told about the lead-up and the subsequent reason for the arrest.

Polo G’s 40-year-old mother later released a video expressing her feelings about the incident and noted that her younger son, who is 16, was not allowed to speak to her. 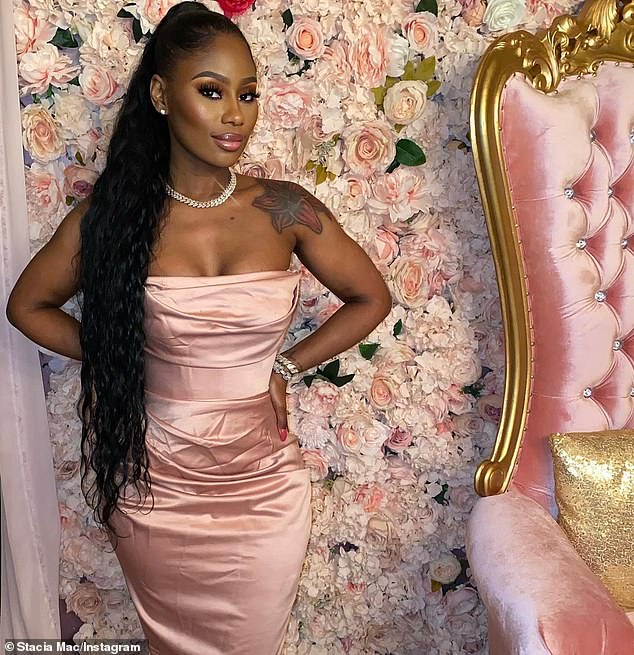 Lead-up: The performer’s mother claimed that her son and his entourage were stopped by law enforcement officers while en route to an afterparty following the release of her child’s third album 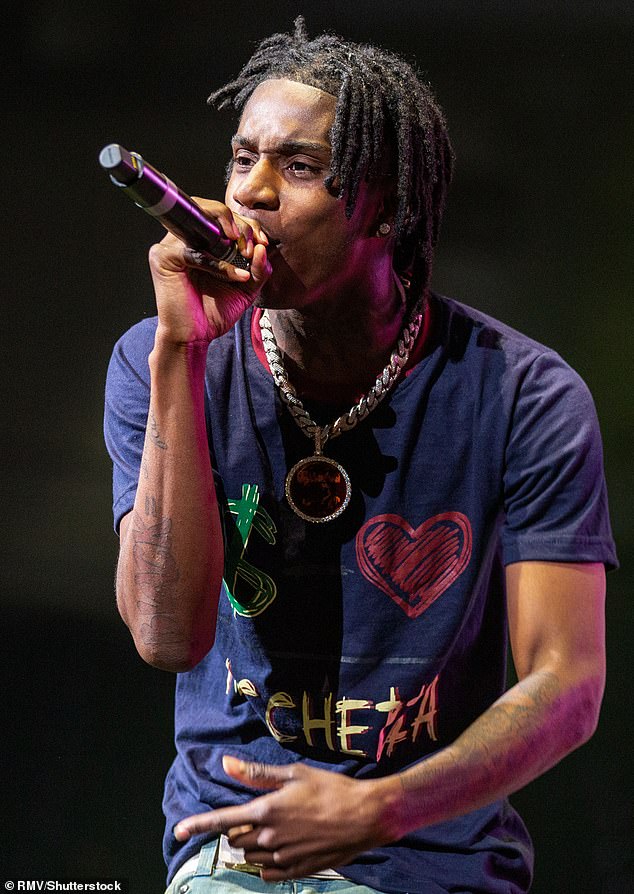 Getting physical: A source spoke to TMZ, who reported that the victim of the alleged attack was hit with elbows and suffered numerous lacerations to their face; Polo G is seen performing in 2019

She also captured a large row of police vehicles that had assembled at the scene of the incident, which she described as ‘beyond ridiculous.’

The rapper’s manager alleged that her son’s vehicle was stopped en route to an afterparty for ‘driving while Black’ and that, when she asked the police about the reason for the stop, they threatened to arrest her as well.

Mac described the police’s response to the incident as a ‘waste of taxpayers’ money’ and that her children were racially profiled simply for being ‘Black and successful.’

The social media personality encouraged her followers to call the city’s cops and demand that Polo G and his brother be immediately released before noting that the experience was a ‘mother’s nightmare realized.’ 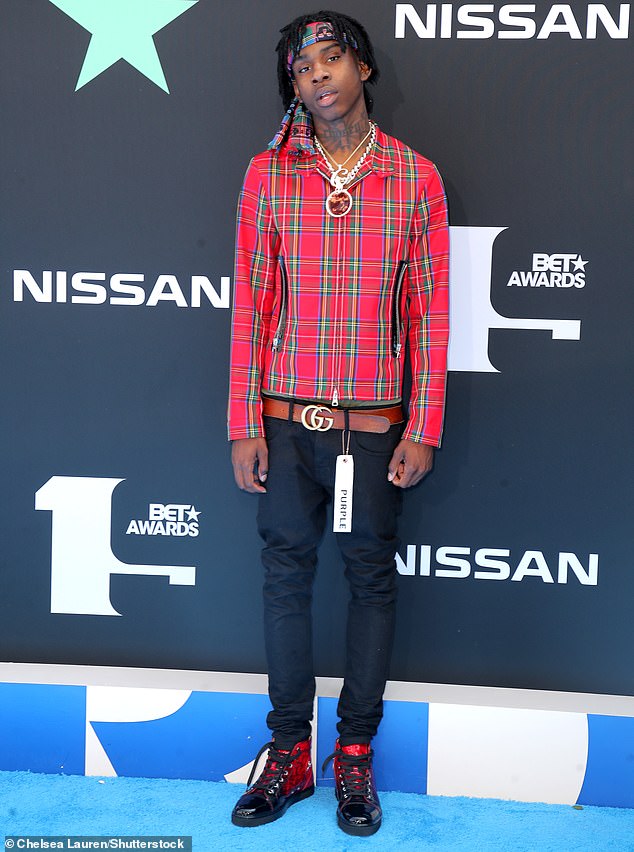 The rapper’s manager alleged that her son’s vehicle was stopped en route to an afterparty for ‘driving while Black’ and that, when she asked the police about the reason for the stop, they threatened to arrest her as well

She concluded by calling the officers who were involved in the incident ‘racist’ and described their response as ‘excessive.’

The Miami police department told the media outlet that they would release details about the incident in the near future.

Early on Saturday morning, Mac took to her Twitter account and noted that Polo G was allegedly riding in his car during the event and that the cops’ stoppage of his vehicle was uncalled for.

‘None of these charges would be possible if the POLICE did not make contact with my son Polo G!!! He was NOT the driver. He was a PASSENGER in a professionally licensed vehicle with security. He was moving smart and correctly. What more could he have done,’ she wrote. 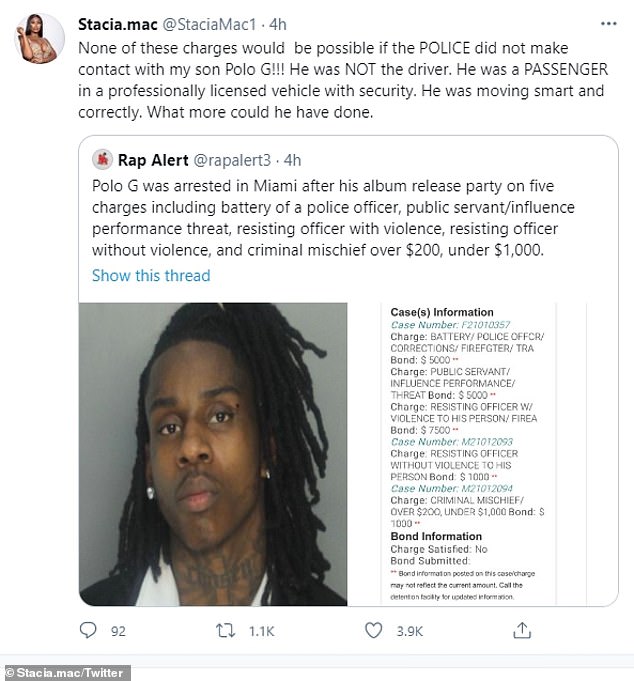 Letting everyone know: Mac later took to her Twitter account and alleged that her son was not driving the vehicle that was stopped and that he was accompanied by licensed security figures

The Chicago-based performer gained prominence in the rap scene for his 2019 single, Pop Out, which reached the number 11 spot on the Billboard 100 chart.

His debut studio album, Die A Legend, was released in June of that year and was met with instant success and positive critical reception.

He followed up his first record with his second full-length release, entitled The Goat, which made its debut last May and garnered a similar response from critics.

Polo G achieved his first number one hit with his track Rapstar, which was made available to the public this past April.

The rapper’s most recent record, Hall Of Fame, was released on Friday. 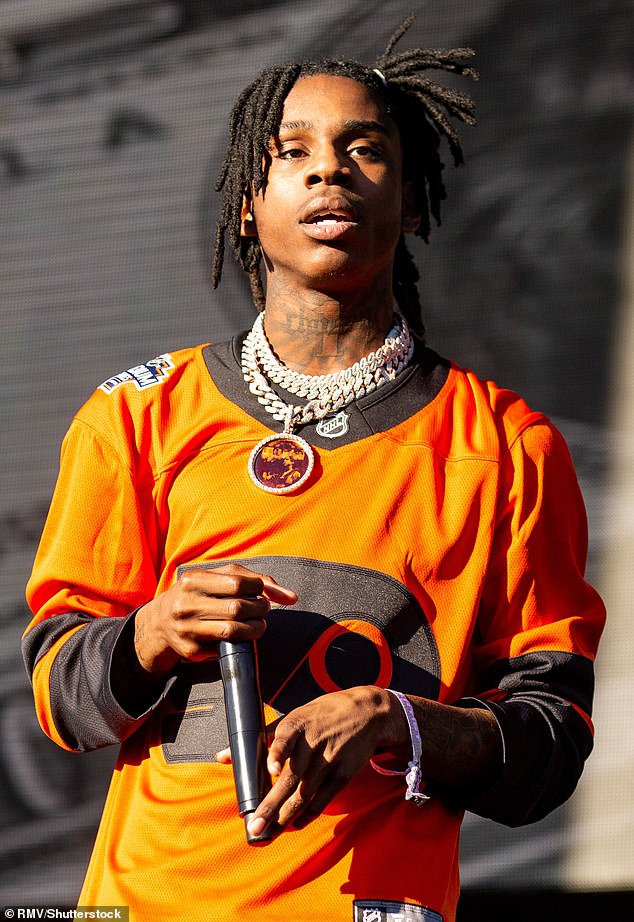 Serious achievement: Polo G’s most recent album, entitled Hall Of Fame, was released on Friday; he is seen performing in 2019