A Kent village has been invaded by a rare species of lizard usually found on the continent.

Much to the surprise of residents in Cuxton, a number of non-native wall lizards have been spotted in the village.

The agile species, which is usually found in central and southern Europe, is known to live in small numbers along the county’s coastline but is now finding a home for itself in the Medway Valley.

In its native habitat on the continent, the non-native wall lizard is a protected species.

The lizards, which can grow up to 8ins, are believed to have been introduced to the UK deliberately by man or by escaping from collectors as far back as the Victorian period.

Since they arrived their populations have continued to thrive due to the warmer climate.

As well as in Kent, the small reptiles have been seen more than 200 miles away in Sheffield but are more commonly found in the south.

Albert Marshall, 70, saw a trio of the exotic creatures living in his garden in Cuxton, alongside native common lizards and slow worms.

Mr Marshall said: ‘I have never seen so many lizards. I’m not sure if it’s the weather causing it.

‘These don’t seem to be as scared as the native lizards. They do run away though.’

‘One of my neighbours has got them as well so it seems Charles Drive is getting quite a few of them.

‘I must admit, I have only noticed them this year and they don’t bother me.’ 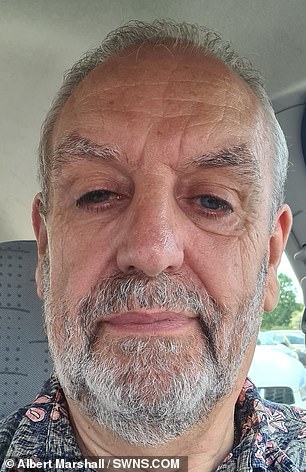 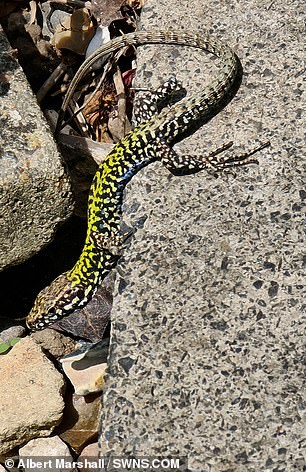 Wall lizards (right) are typically found in hotter climates in southern and central Europe. Retired salesman Albert Marshall (left)  has spotted several in his back garden in Kent

How did the wall lizard get its name?

It can often be seen basking, hanging from walls or rock faces.

Where are they from?

Wall lizards are native to southern and central Europe

What are their distinctive features?

Wall lizards can be p to 23cm long, have vivid green backs and may have black spots, mottling or stripes.

The elderly resident was surprised to learn the lizards are mostly found on the Kent coast after he shared a post on Facebook.

The species have been in Folkestone – more than 40 miles from Cuxton – for over 30 years after it is believed they were illegally dumped by a pet shop owner.

Neighbours in Cuxton said they have also seen the species, with one giving them water on a spoon when she sees them.

Another village resident said: ‘We have seen it on the steps up to our path during the hot spell that we recently had.

‘Nice to see the different varieties of animals now beginning to appear.’

Animal experts debate whether the reptile has a harmful impact on the UK’s native species of lizard.

The non-native wall lizard tends to have a more rounded snout and eyes higher on the head giving it the appearance of a small alligator with a vivid green back and a very long tail.

They can grow up to 23cm (nine inches) long with a longer tail to body ratio and can be seen with black spots, mottling or stripes.