A young woman has told how she managed to beat the odds and recover from a rare type of cancer – despite doctors giving her a five per cent survival rate.

Zulema Rubio, a recent college graduate and legal assistant from New Jersey in the US, explained how she first experienced some unusual symptoms in April 2020 such as a swollen face – but put it down to too much salt and not enough exercise during the Covid-19 pandemic.

Bu when her lymph nodes felt hard to the touch, Zulema, then aged 23, made a trip to urgent care and was quickly referred to the emergency room at Hackensack University Medical Center.

There, doctors discovered a tumour and initially thought that due to her age, Zulema, who is now cancer-free, may have had lymphoma, but in July she was diagnosed with intimal sarcoma – a rare malignant tumour.

Zulema, pictured here after recovering from a rare type of cancer, initially thought her facial swelling was due to too much salt and too little exercise. But doctors discovered a tumour 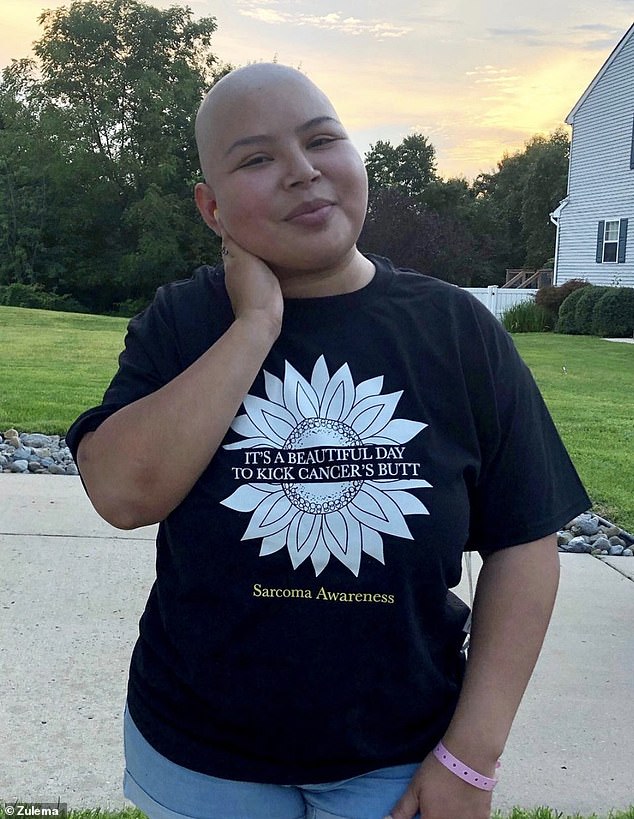 Zulema (pictured after treatment) who is now 24 and cancer-free, is sharing her story in a bid to inspire others – and also to encourage people to seek medical help if they have unusual symptoms

Zulema’s condition was impacting the blood flowing from her face and brain to her heart.

Explaining that at first, the prognosis was not good, he said: ‘When I met Zulema I was afraid for her. Here was this beautiful, young woman and her veins and face were swollen.

‘Once I received the tissue diagnosis I knew there was a very limited chance I could help her.’ 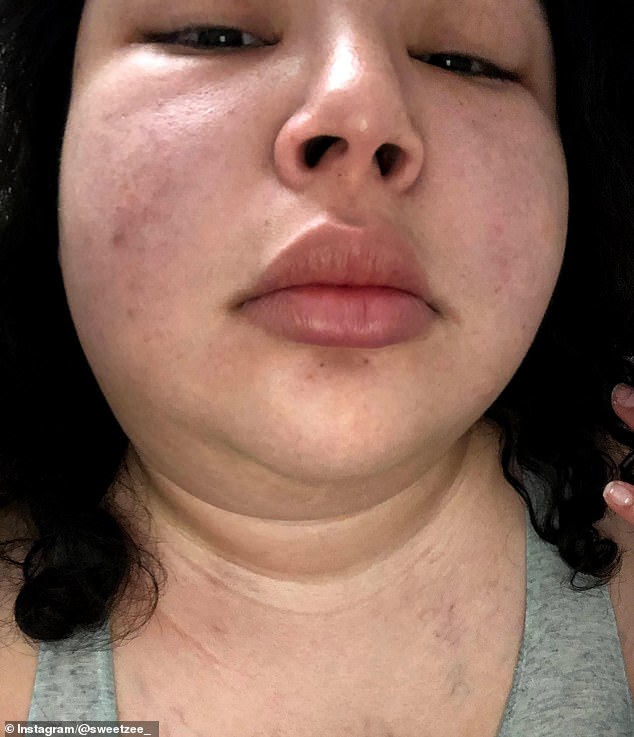 When the young woman was first diagnosed with cancer, doctors thought it was lymphoma. But it turned out to be intimal sarcoma – a rare malignant tumour

WHAT IS INTIMAL SARCOMA?

‘Intimal sarcoma (ISA) is an exceedingly rare undifferentiated sarcoma that arises in the pulmonary artery and less frequently in the aorta or its branches.

ISAs behave highly aggressive with a mean patients’ survival ranging from 5 to 18 months.

Patients with ISA are mostly of middle age at diagnosis and typically present with non-specific symptoms, which sometimes masquerades as thromboembolic disease.

Thus, patients are often diagnosed in an advanced disease stage.

ISAs are often reported to be resistant to conventional chemotherapy.’

It turned out the cancer was in Zulema’s superior vena cava – a major vein in the upper body that carries blood from the head, neck, upper chest, and arms to the heart.

Dr Pecora, along with a team of doctors who specialised in thoracic and cardiac surgery, treated the 23-year-old, who faced a very aggressive treatment plan.

Describing the intensity of the treatment, Zulema said: ‘I was in the hospital receiving ongoing chemo for 24 hours straight, four days in a row, every two weeks.’

This was followed by complicated 14-hour surgery surgery, where doctors had to remove part of the superior vena cava vein and put in tubing to allow blood to flow through.

‘I went in on March 24, 2021,’ explained Zulema. ‘The surgery took 14 hours. The first four hours were spent with doctors just trying to determine if it could be done.’

Doctors were not the only ones facing a stressful and uncertain few hours: Zulema’s mother, Monique Jasso, was waiting anxiously throughout.

To make matters even worse, because of the Covid-19 pandemic, she was not able to be at the hospital with her daughter.

Monique explained: ‘After four hours in surgery, doctors called me from the hospital and said they would try.’ 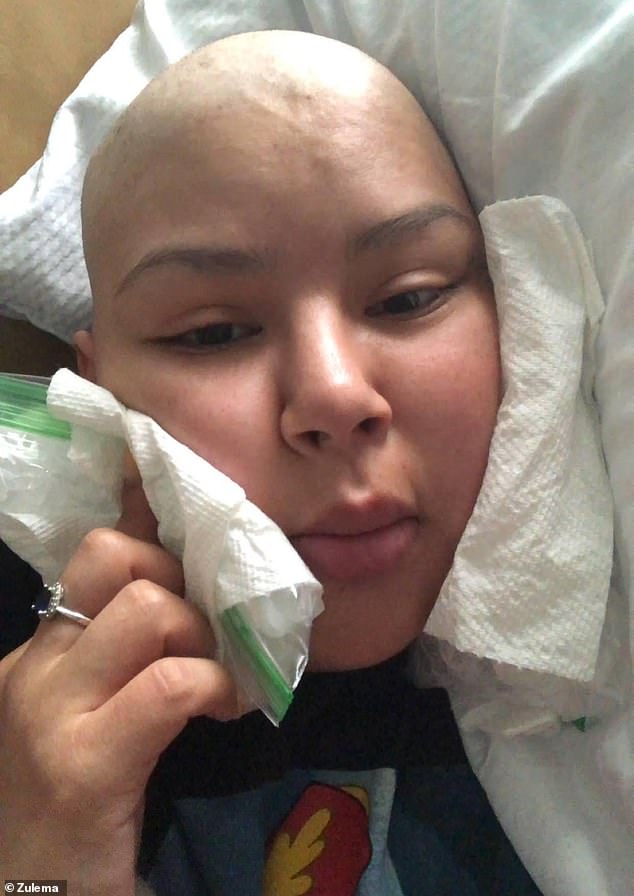 The survivor (pictured during treatment) is calling people with illnesses to persevere, and not give up on themselves, noting that her doctors battled with her 14-hour surgery, and she herself had to fight through treatment

The next update she was given was that they had managed to remove her daughter’s tumour – and that she would be okay.

‘We just cried and prayed and are so thankful,’ she said, attributing the success of the treatment to her daughter’s fighting spirit as well as the talented doctors.

Speaking about the complexity of the treatment, Dr Pecora commented: ‘This procedure was as complicated as you can get from a surgical side.

‘We used all the tools in the toolbox from a cancer perspective. Without the skill of this entire team, she wouldn’t be here.

‘The knowledge, skill and technical prowess that these doctors brought to achieve this along with nurses and radiation therapists was truly a magical coalition that came together to provide care she would not find many places in the country to achieve an incredible outcome.’

Zulema, who is now 24 and cancer-free, is sharing her story in a bid to inspire others – and also to encourage people to seek medical help if they have unusual symptoms.

She also calls on people with illnesses to persevere, and not give up on themselves, noting that her doctors battled with her 14-hour surgery, and she herself had to fight through treatment. 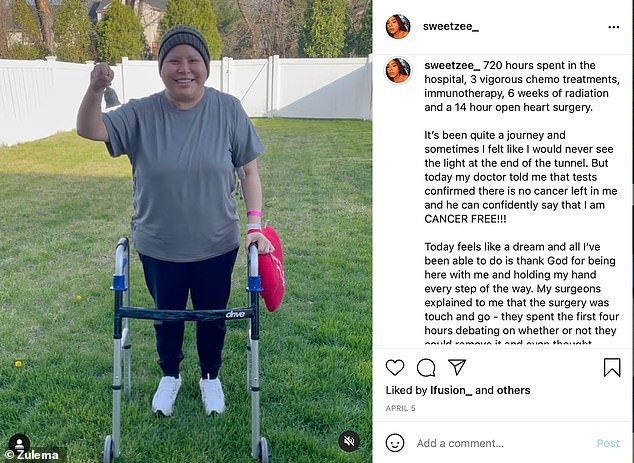