Rare cat has one gold eye and one blue eye

A striking snow-white cat has stolen its its owner’s heart with its multi-colored eyes – one sparkling gold and the other ice blue.

Seven-year-old Richard is believed to be a Khao Manee or ‘Diamond Eye’ cat – an exotic breed originating in Thailand and dating back hundreds of years.

The mysterious-looking feline was adopted by 28-year-old Jessica Hoyt, a student from Madison, Wisconsin, after she ‘fell in love’ with his unusual characteristics.

Striking: Seven-year-old Richard was born with multi-colored eyes – one gold and one blue 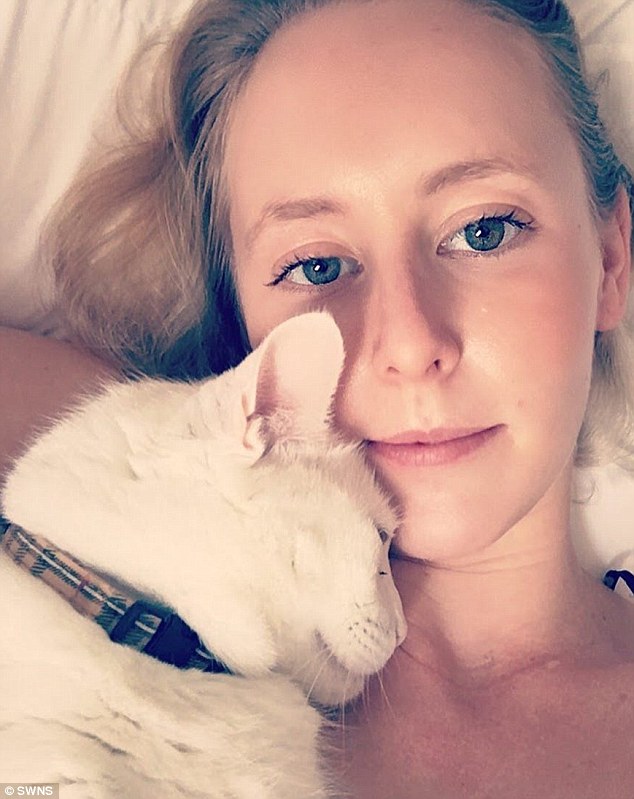 In love: He was adopted in 2012 by Jessica Hoyt, 28, who said she fell in love with the feline

Unusual: Richard is also polydactyl, which means he has thumbs too

Jessica said she was drawn in by the cat’s ‘aggressively friendly’ personality when she adopted him from Dane County Humane Society in 2012 after he was abandoned.

She said: ‘He has such beautiful eyes and he’s also polydactyl, which means he has thumbs too.’

‘I immediately fell in love with Richard, but it was his personality that really attracted me to him. He is wildly curious and aggressively friendly.’

‘When I first saw him, he was so striking,’ Jessica said. ‘He has one gold eye and one blue eye. Our vet thinks he’s a Khao Manee cat.’ 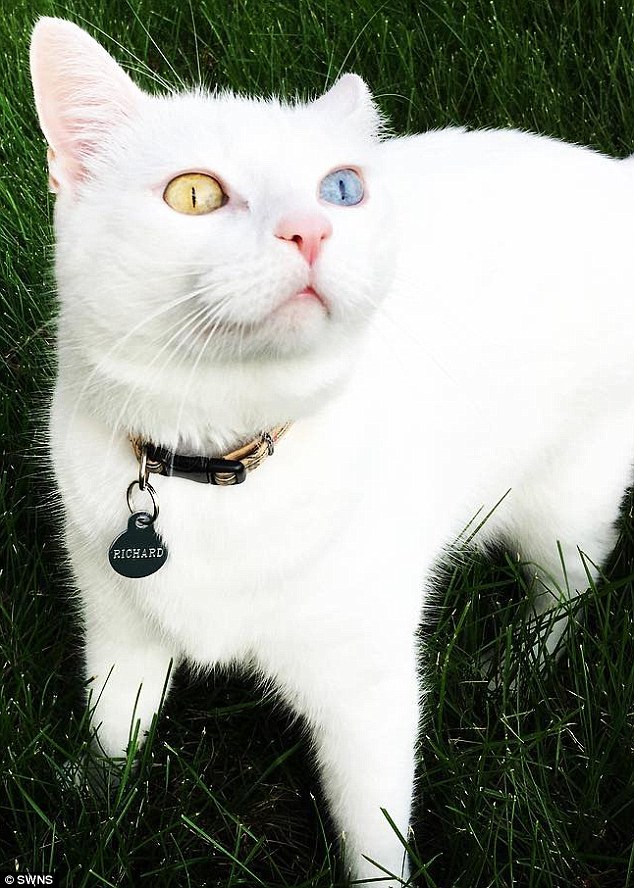 Great personality: Jessica said it was his personality ‘that really attracted me to him’ 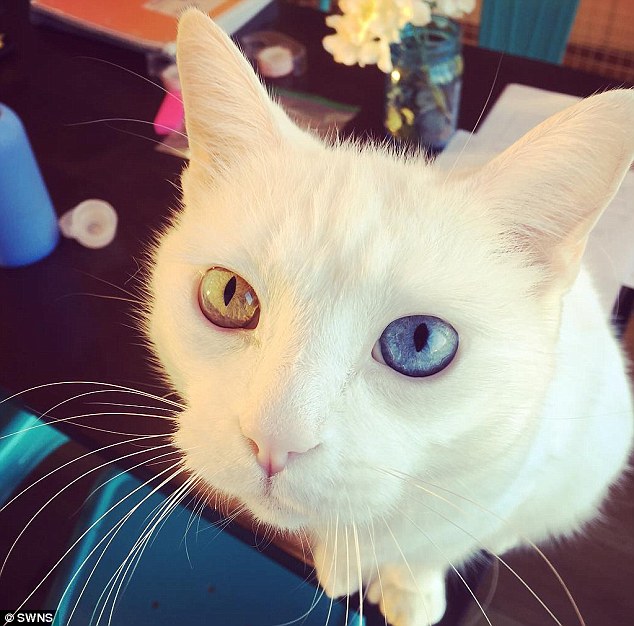 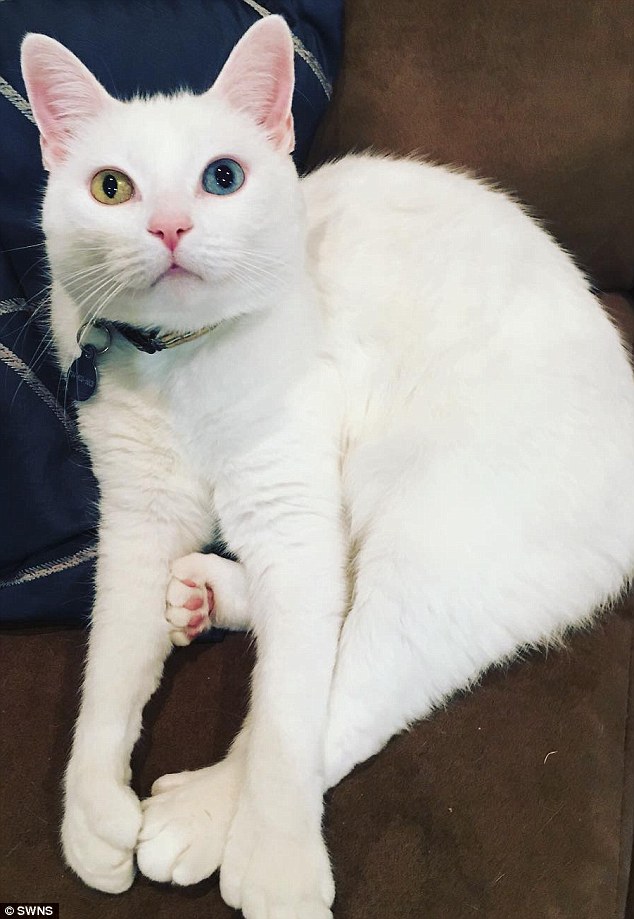 Lucky cat: The Khao Manee breed were by royals as they thought they were a symbol of good luck 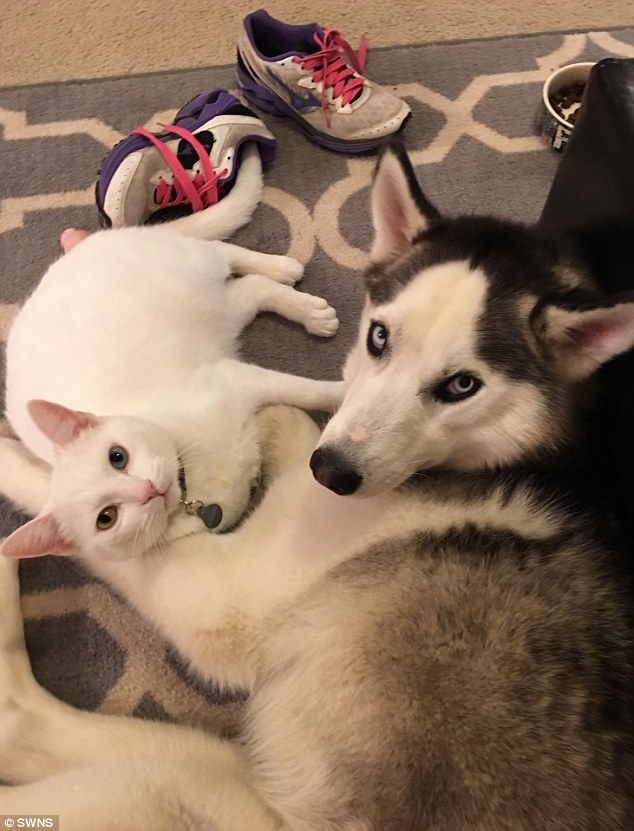 Best friends: Richard is also best friends with Jessica’s other pets – a husky named Arya and a Maltese named Eloise

She added: ‘Asian royals used to keep them as they thought they were a symbol of good luck.’

‘We’re not superstitious but we think it’s true. Richard’s certainly brought a lot of love, and luck, into our family.’

Khao Manee cats originated in Thailand and only entered the United States in the 1990s as, prior to this time, exports were heavily guarded by the Thai government.

Throughout history the breed was a favored pet of royals as the cats were thought to be lucky.

Richard, who has his own Instagram account, is best friends with Jessica’s other pets – a husky named Arya and a Maltese named Eloise.

‘People are always asking me about Richard and to see pictures of him so my sister encouraged me to set up an Instagram for him,’ she added.

‘People think he’s a real hoot and we have had such a good reaction to it.’