Clearing away the debris and detritus of modern mechanised warfare is something that warring nations have had to deal with since the end of the First World War.

But it was the battle for Britain’s skies during the Second World War that left a particularly identifiable trail of destruction, with downed planes including the charred remnants of Hitler’s Luftwaffe littering the farmer’s fields of the British Isles.

The battle of Britain came at a huge cost to the country with widespread bombing destroying homes and disrupting infrastructure for more than a decade to come.

In the process of attempting to rebuild the country mid-war the authorities in Britain collected and disposed of shot down or crashed aircraft, both allied and enemy.

This was made a priority due to the dangers posed by the wrecks and the possibility of salvaging much needed materials – recovery of the aircraft was managed largely by Royal Air Force maintenance units 49, 58, 60 and 71.

This stunning collection of images, taken between 1940 and 1942, shows the extent of the wreckage left after the air battles with Hitler’s Luftwaffe and how the remnants were dealt with during the turning point of the second world war.

Soldiers scour the fields and pile wreckage in a convenient heap around the smashed engine of a Messerschmitt which dived vertically into the South Downs at Falmer, near Brighton on 1 October 1940 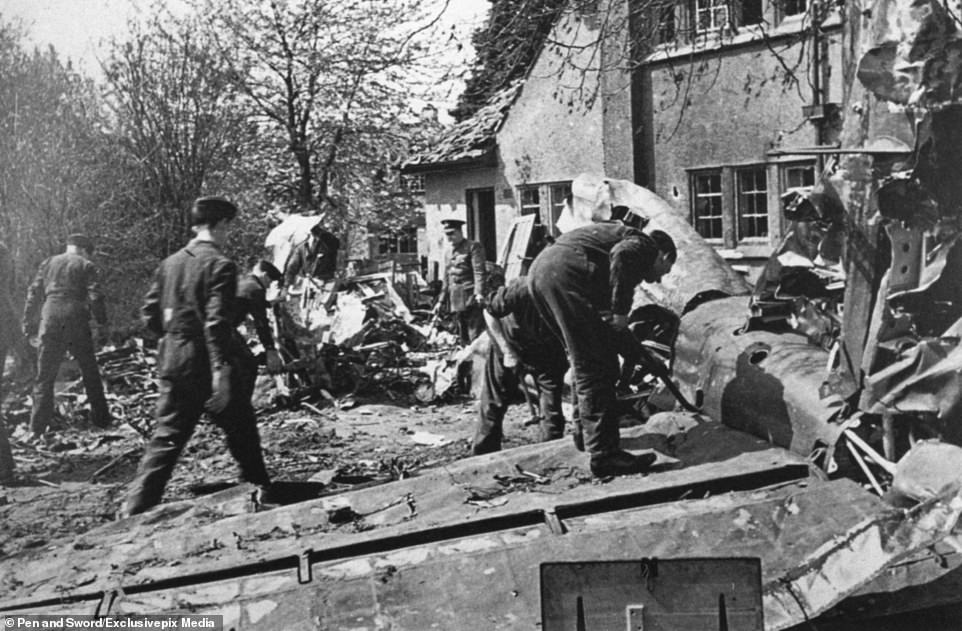 This was the aftermath when a Heinkel 111 of 3./KGr126 was hit and disabled by the Harwich anti- aircraft battery before crashing out of control into houses at Victoria Road, Clacton-on-Sea, killing all four crew members. On board were three ‘C’ type mines, two of which exploded in the crash. The subsequent fire, which destroyed a number of houses and damaged many more, killed two civilians and injured another 150 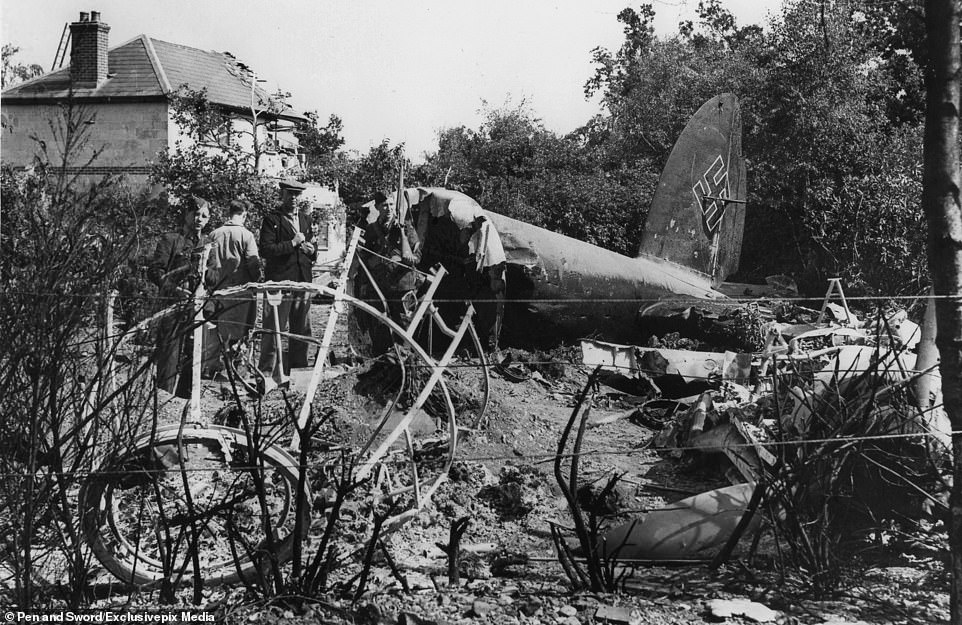 Crashing Heinkel 111s seemed to have a particular affinity for houses, this one ending up in the back garden of a house at Hale near Fordingbridge in Hampshire on the night of 29/30 August 1940, having been shot down by a Spitfire of 92 Squadron flown by Plt Off A.R. Wright 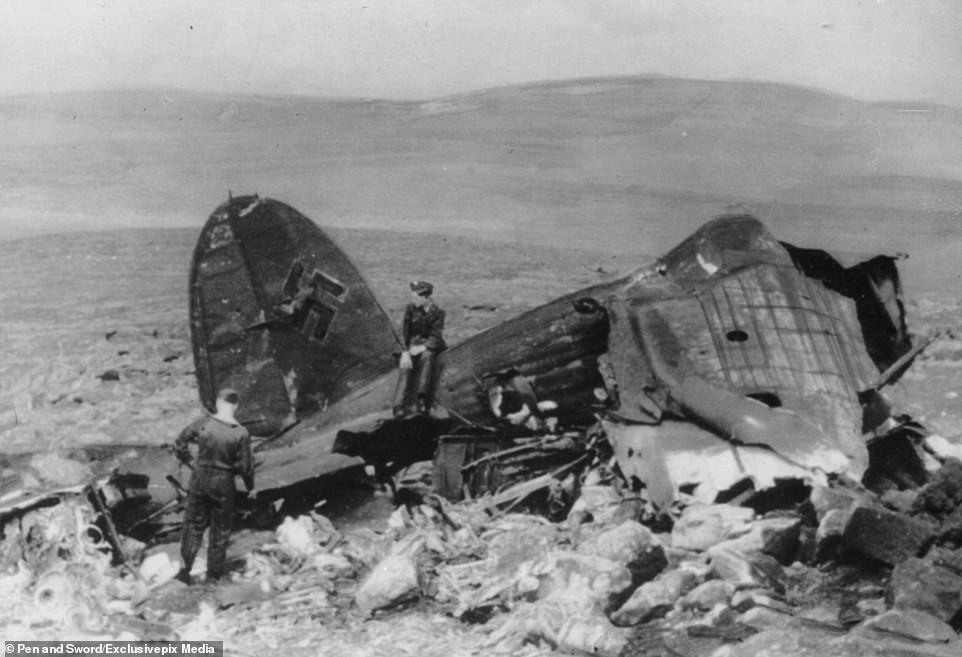 A Heinkel 111 that flew into a mountainside at Eastman’s Cairn, Cairnsmore-of-Fleet on 8 August 1940. Whilst RAF personnel and Intelligence Officers managed to reach the wreckage, it proved impossible to get it off the mountain and, in fact, the wreckage remained in situ until at least the 1980s when it was lifted off by helicopter for museum display 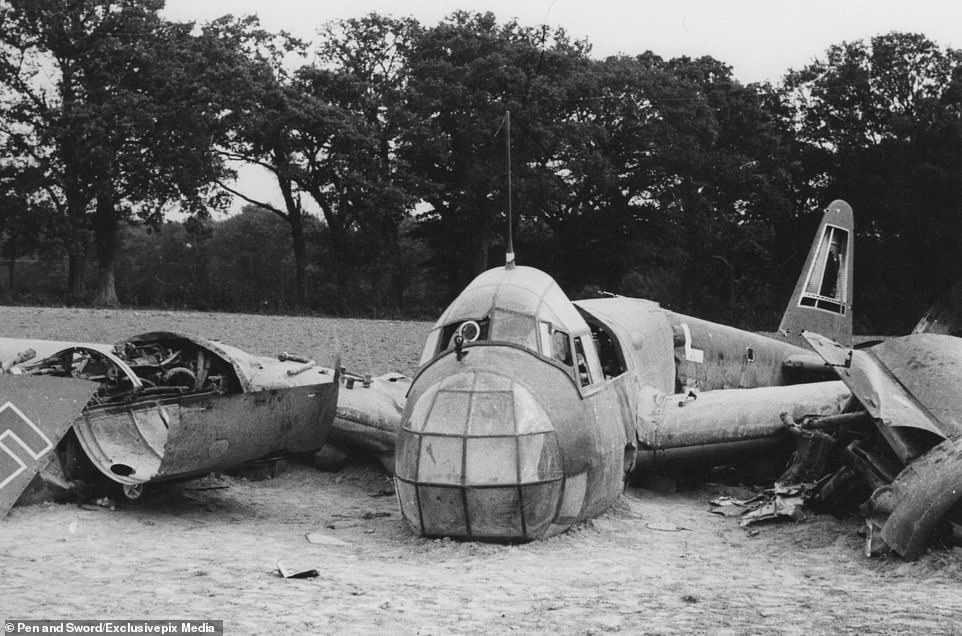 This Junkers 88, with its broken back, was shot down on 9 September 1940 at Newells Farm, Nuthurst, West Sussex, where it had been substantially ‘got at’ by souvenir hunters when this photograph was taken. The swastikas that had been stripped from the tail were found in when police apprehended a man and made him leave them at the site 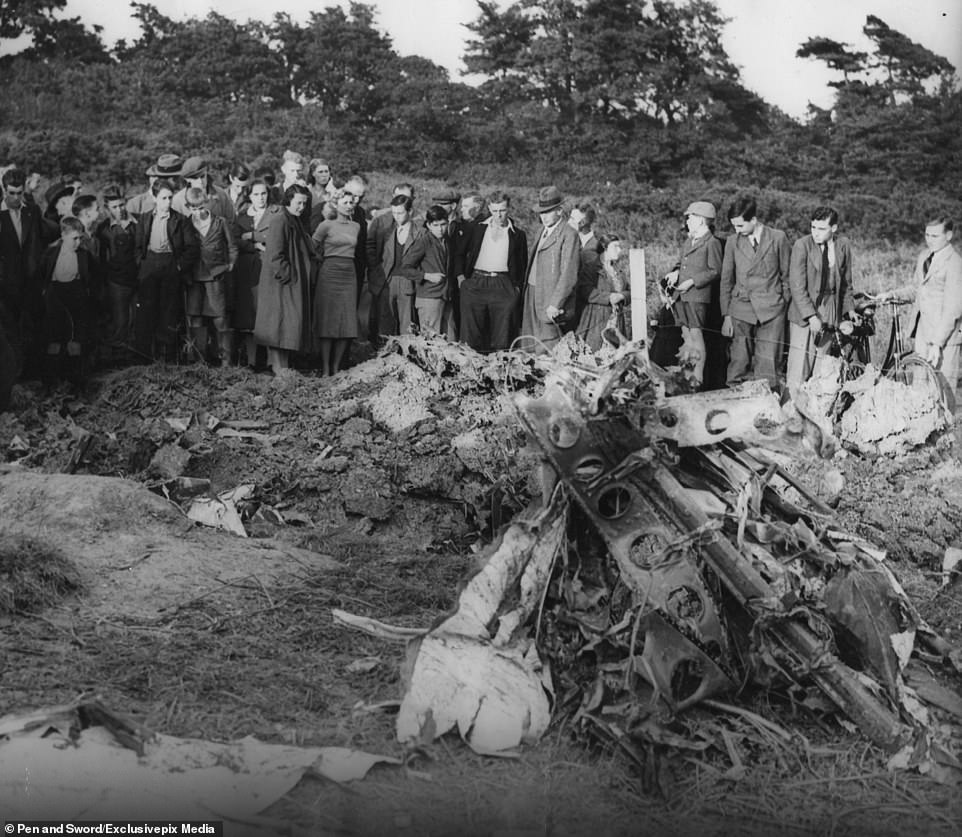 Preparations for war resulted in an increased number of training-related and other accidents to RAF aircraft. This was the mangled wreckage of Hurricane L1593 of Biggin Hill-based 79 Squadron photographed at Ditchling Common in East Sussex where the aircraft crashed during a thunderstorm on 20 June 1939 whilst on a direction-finding homing flight. The accident resulted in the death of its pilot, Sgt L.F. Davis, RAF 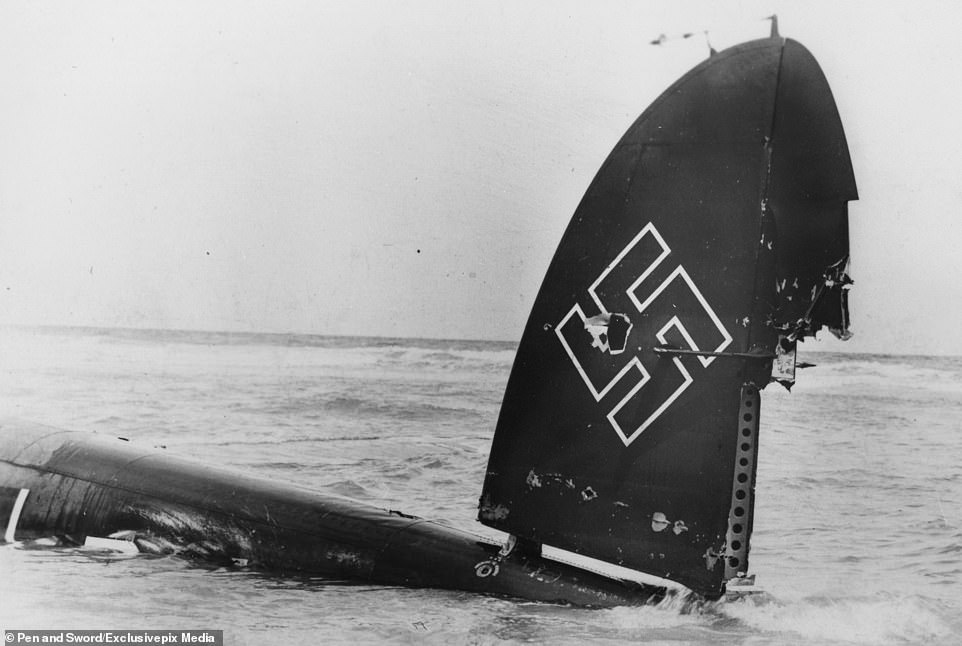 The first enemy aircraft were being downed over the British Isles from October 1939 onwards, but by early 1940 Luftwaffe activity over the country was increasing and gathered in tempo as the Battle of France reached its zenith and culminated in the Dunkirk evacuation 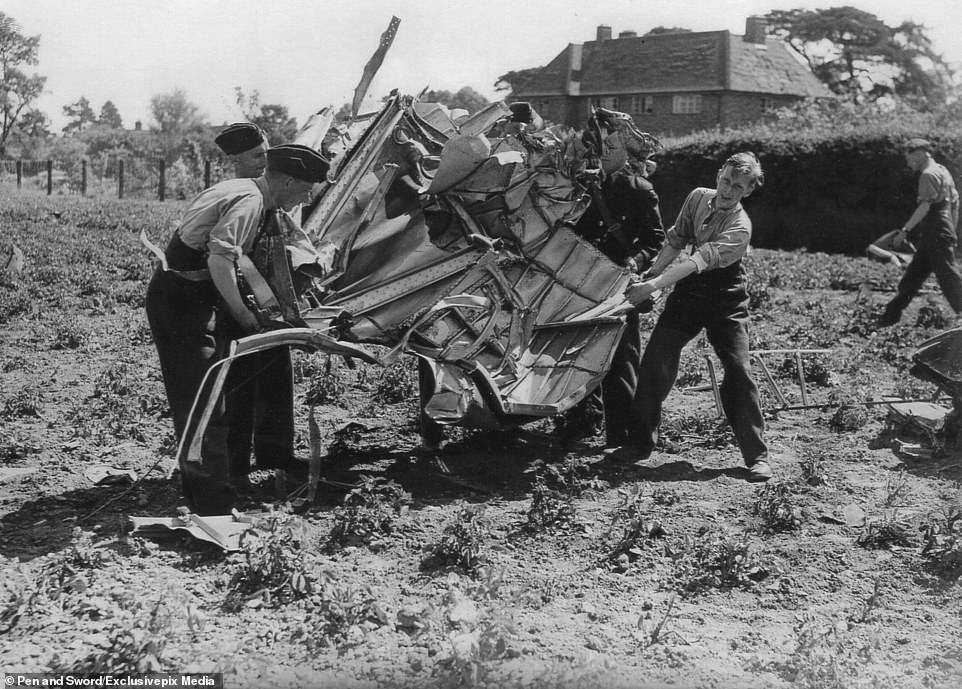 Posing rather less difficulty for the salvage teams, this was all that was left of a Heinkel 115 seaplane that crashed and exploded at The Old Rectory, Eyke, Suffolk on 7 June 1940. The aircraft had been on a mine-laying sortie but flew into the ground after the pilot was apparently dazzled by searchlight beams 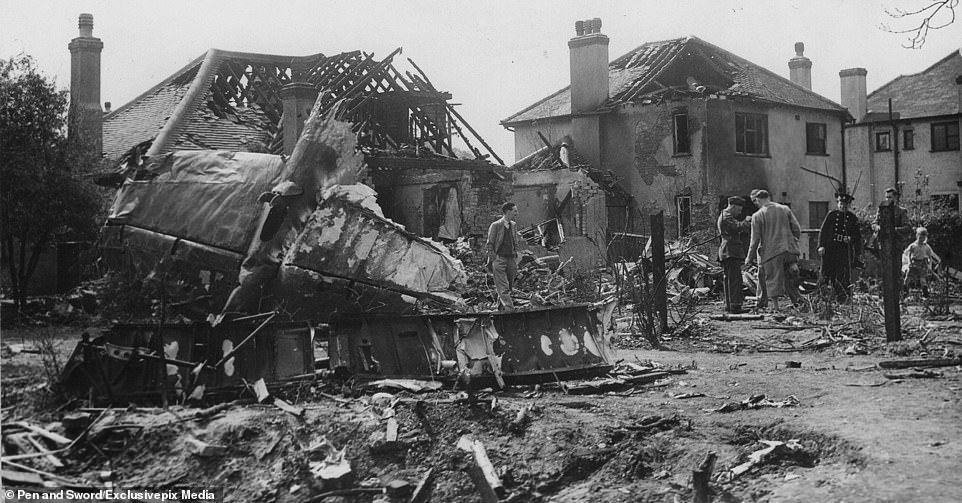 The tail section and a portion of wing spar seems to be about all that is left for 49 MU to collect after a Heinkel 111 of Stab III./KG1 smashed itself to pieces amongst the bungalows and houses of Manor Avenue, Caterham on the night of August 26 1940. Having suffered a direct hit from anti-aircraft fire during a night mission to bomb factories in the Coventry area 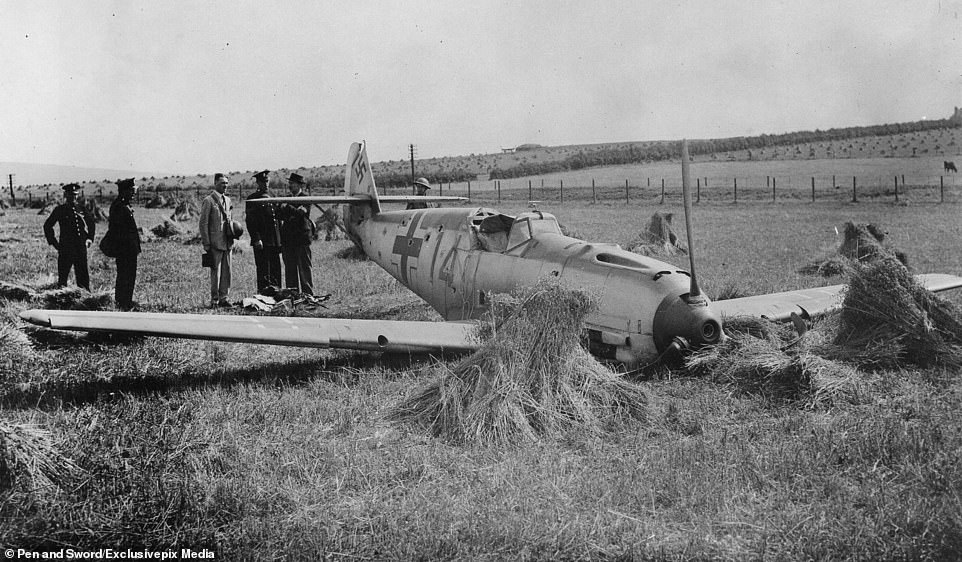 When Uffz Leo Zaunbrecher crash-landed his battle-damaged Messerschmitt 109 amongst the corn stooks at Lower Mays Farm, Selmeston on 12 August 1940 the fighter had not yet ended its useful life. Its little red devil emblem on the port engine cowling attracted the attention of souvenir hunters and photographers alike 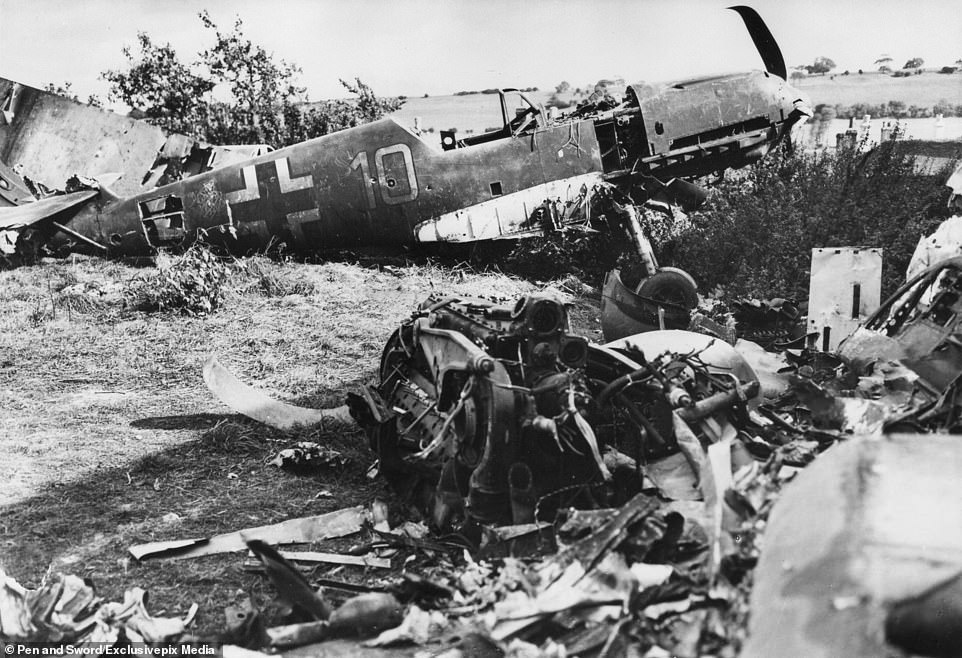 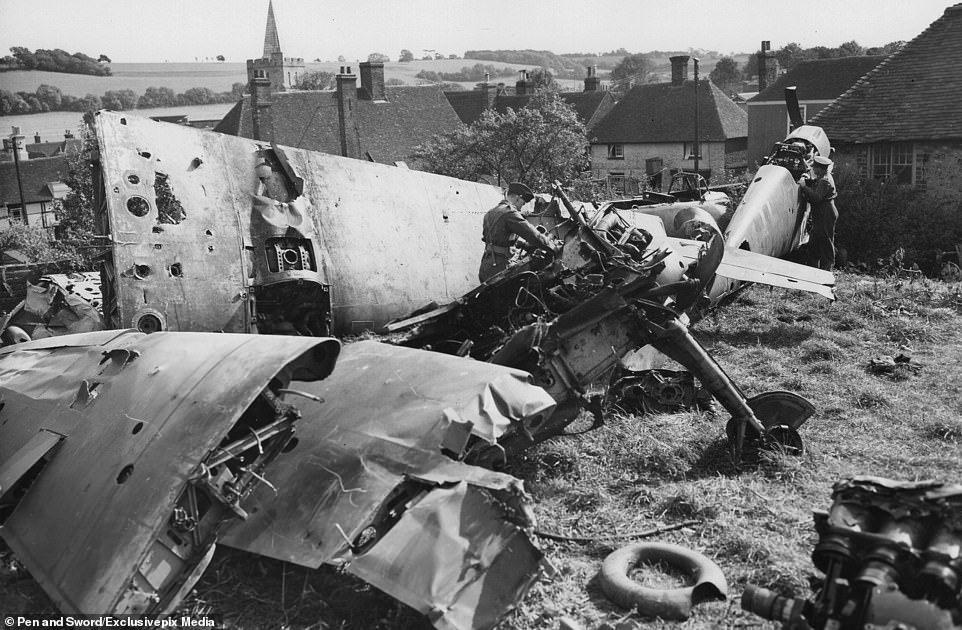 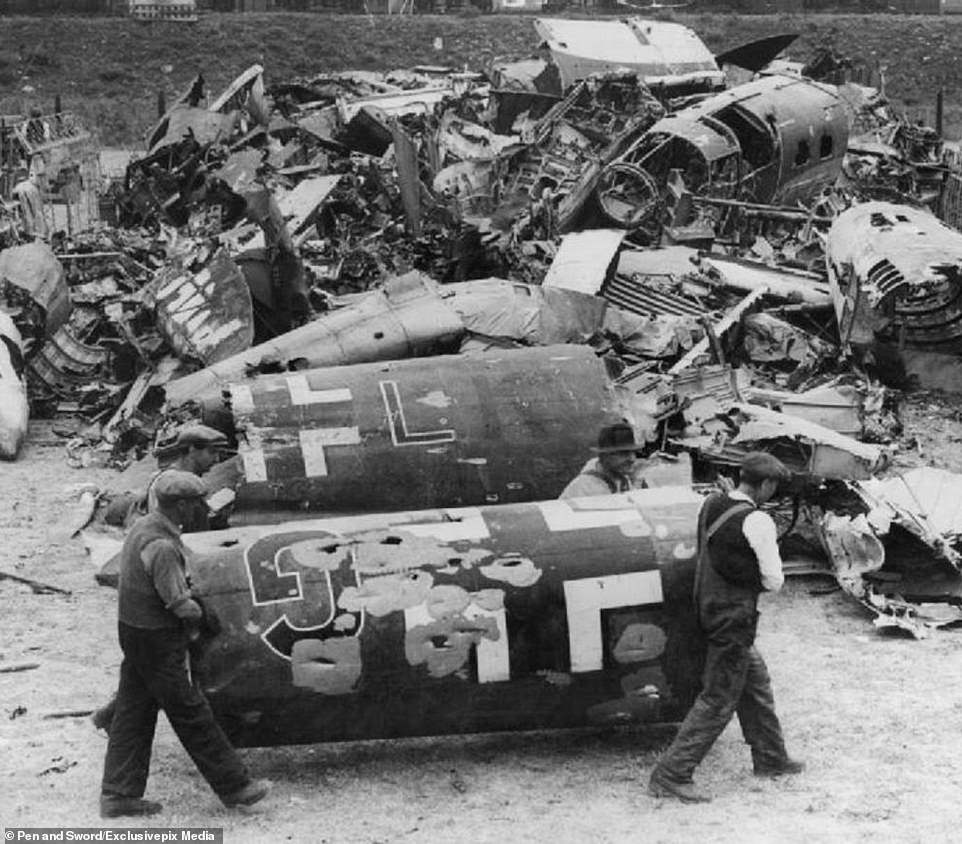 At the Banbury processing plant, workers carry a section of the Dornier 17 fuselage brought from the crash site at Paddock Wood on 3 July 1940 (see page 19). A mass of other enemy aircraft wreckages await the smelter 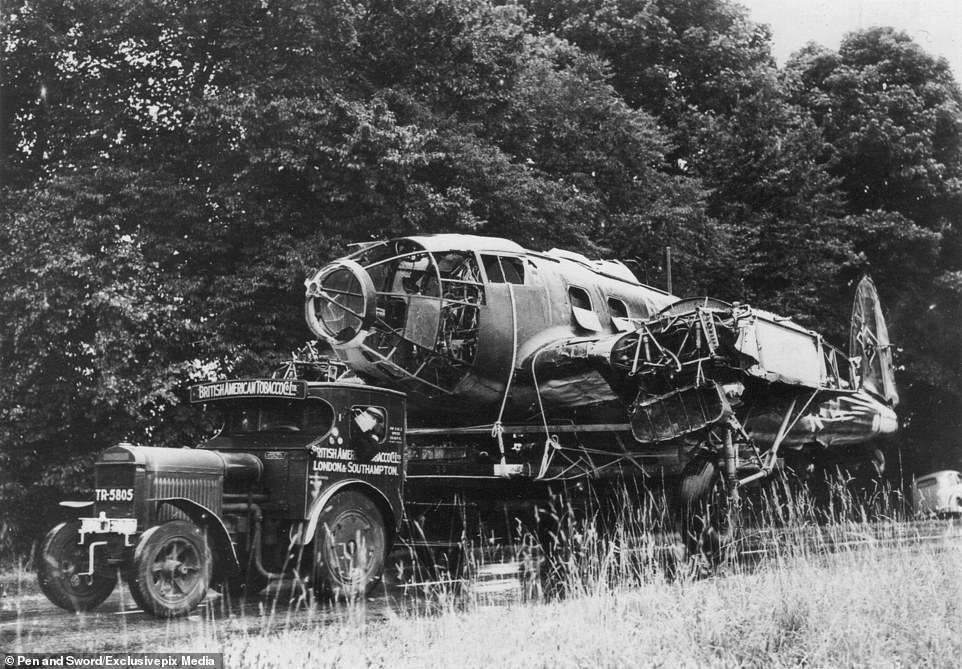 Other haulage firms, too, were enlisted to collect and transport aircraft wreckages. Bizarrely, though, this lorry belonged to the British American Tobacco Company Ltd but has been press-ganged into moving a Heinkel 111 rather than cigarettes. Very much an over-sized load, it will be seen that the main landing wheels are running on the road either side of the lorry bed and almost acting like outrigger stabiliser wheels 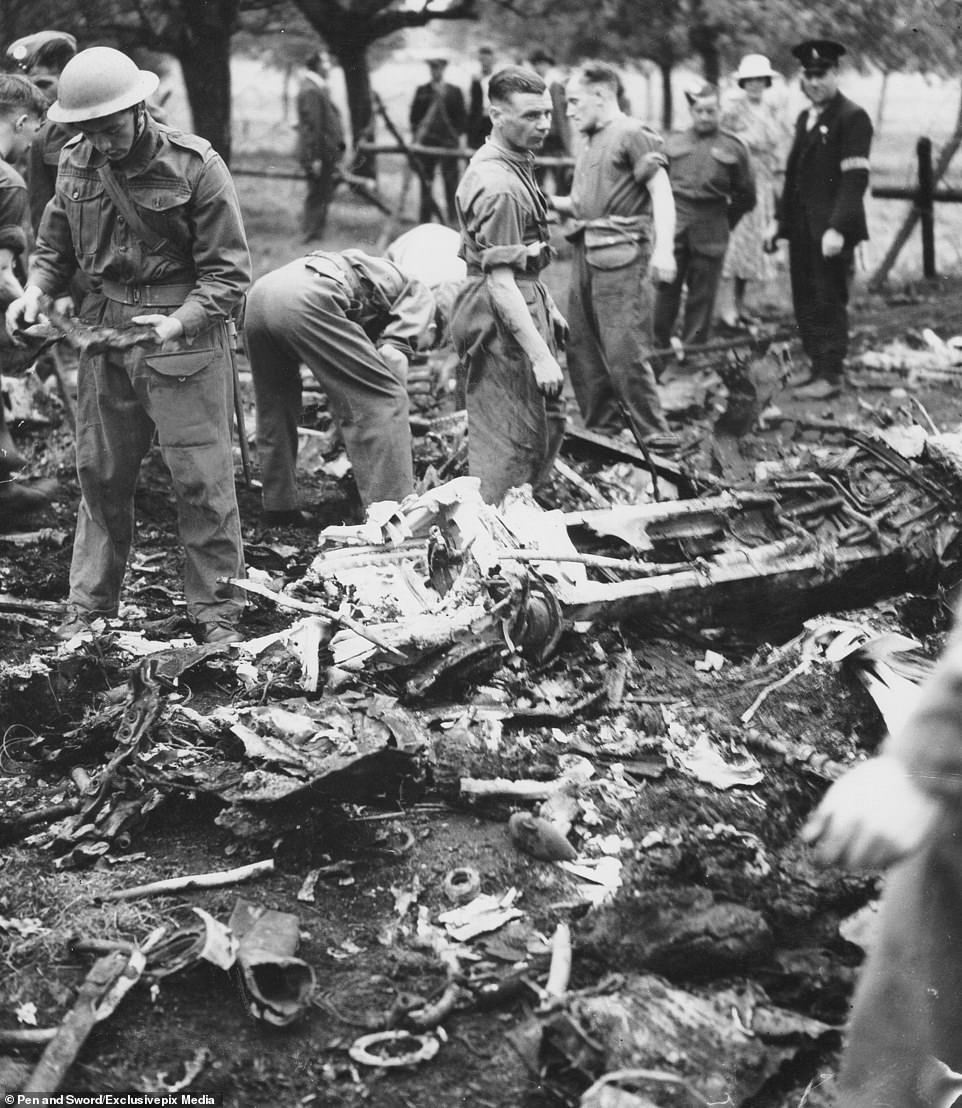 Soldiers pick amongst all that is left of a Junkers 88, shot down at Church Farm, Aylesford on 18 August 1940. The aircraft has been comprehensively smashed to pieces with only the main wing-spar identifiable in this photo- graph. Crash Inspector Pilot Officer Bernard Clarke was assigned to visit this crash site where he noted: ‘Scrap only’ 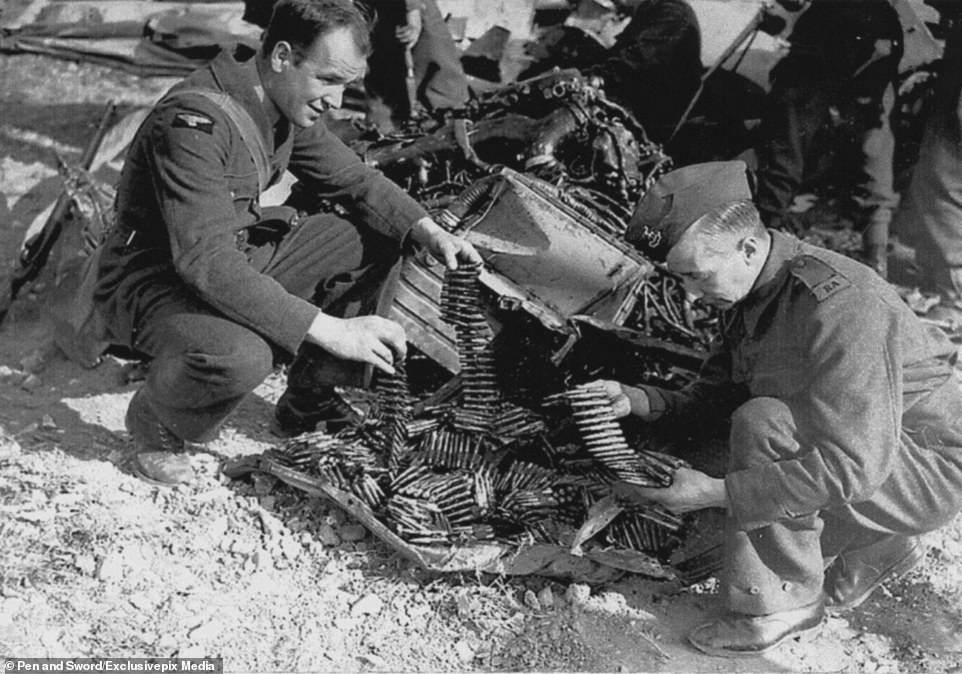 This time an RAF airman and a Royal Artillery soldier examine belted 7.92mm rounds in the wreckage of a Messerschmitt 109 shot down at Chelsham, near RAF Biggin Hill on 30 August 1940. Bullets were popular although dangerous souvenirs, and became valuable ‘currency’ to schoolboy collectors. The fact that bullets or cannon shells were live and dangerous mattered little to collectors 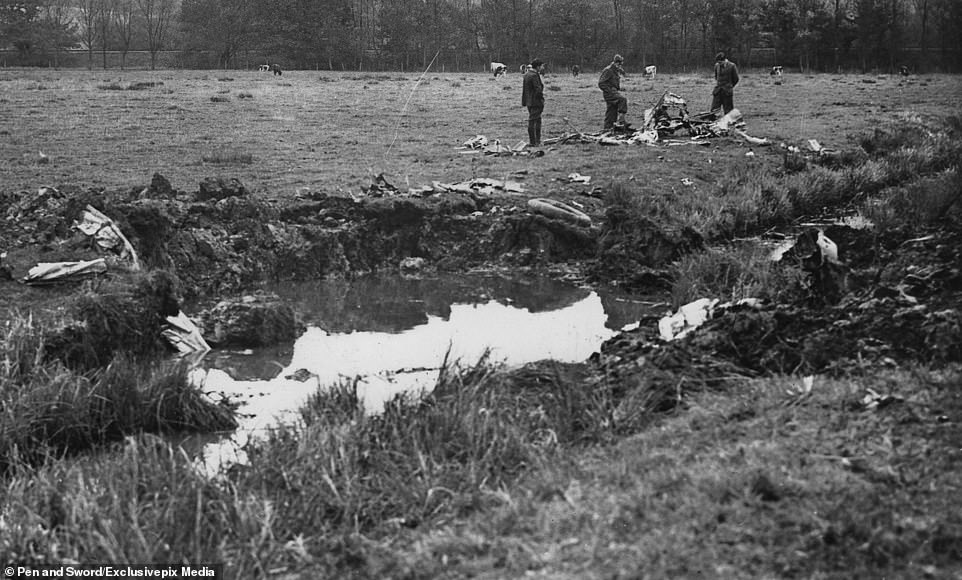 There was hardly anything left here, let alone bullets, for anybody to pick up. Looking more like a bomb crater, this was where a Messerschmitt 109 impacted into a drainage ditch on Brede Marshes at Guestling in East Sussex on 25 October 1940 after its pilot had baled out injured and into captivity. Such was the force of the impact in the soft ground that the aircraft has almost entirely disappeared 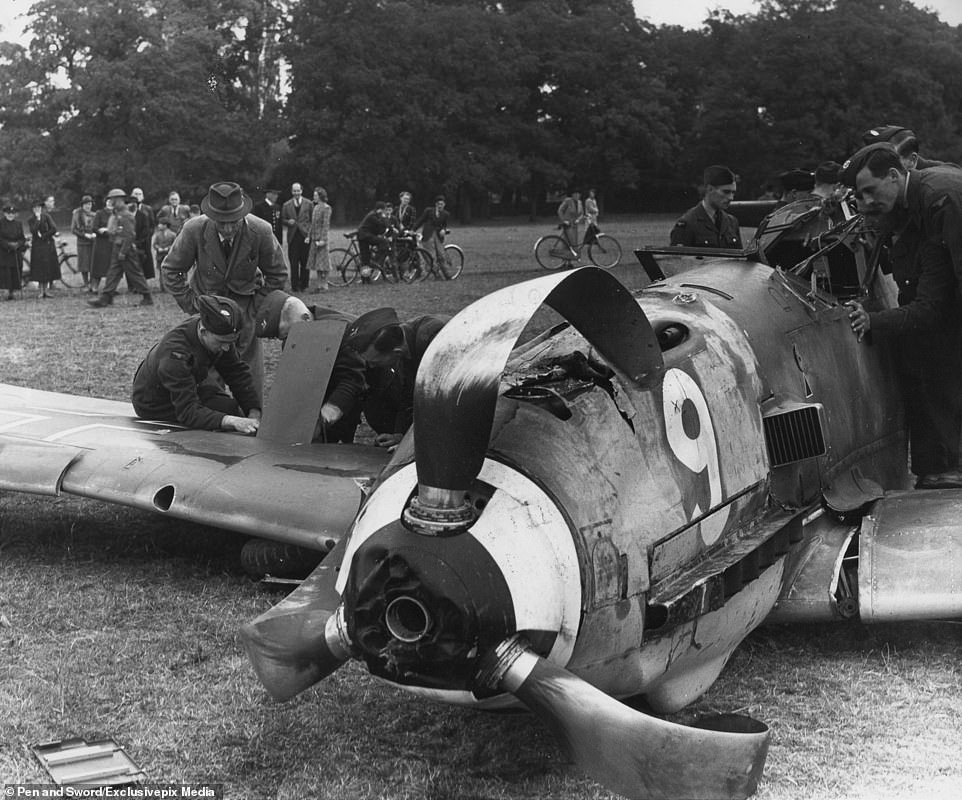 Righted by the Coles crane, the Messerschmitt 109 is subject to eager attention by the RAF salvage gang. One group are intent on the wing gun and its ammunition while another party seem more interested in what they can find in the cockpit 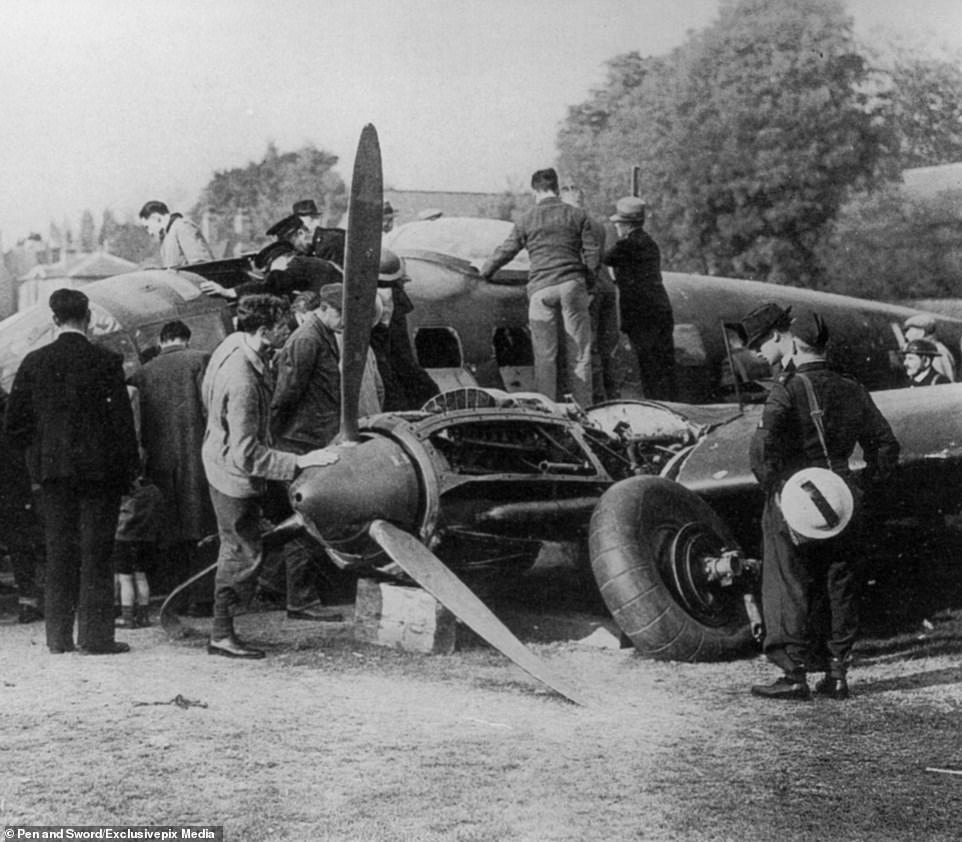 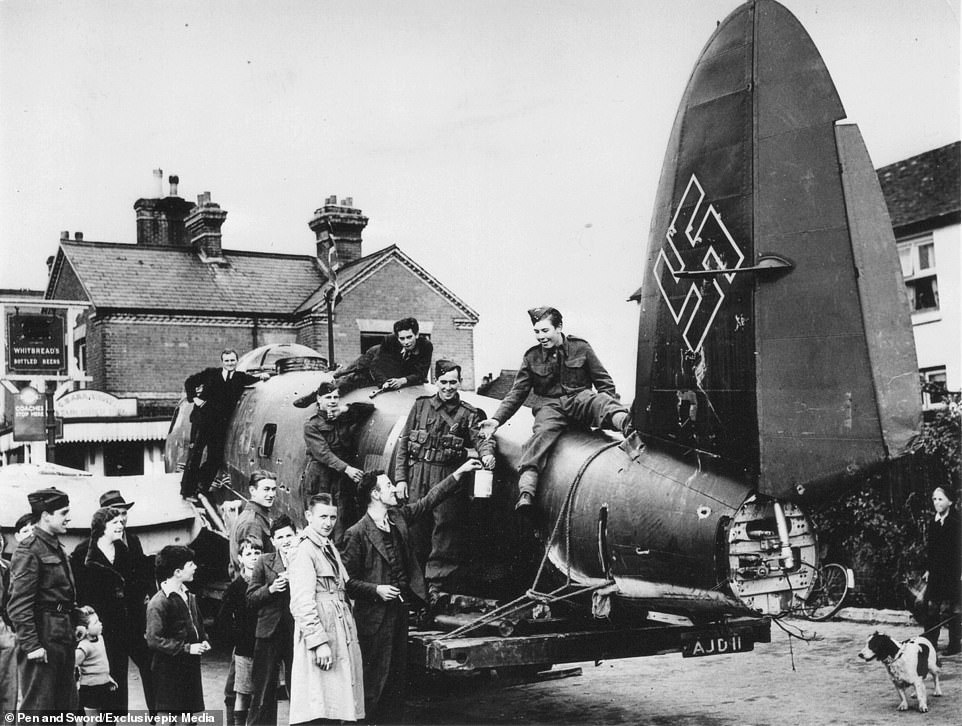 This Heinkel 111 is on temporary display in the front car park of The Half Moon pub at Hildenborough in Kent, and only a very short distance from where it was shot down on 11 September 1940. A civilian lorry has been pressed into service to take the wreck away 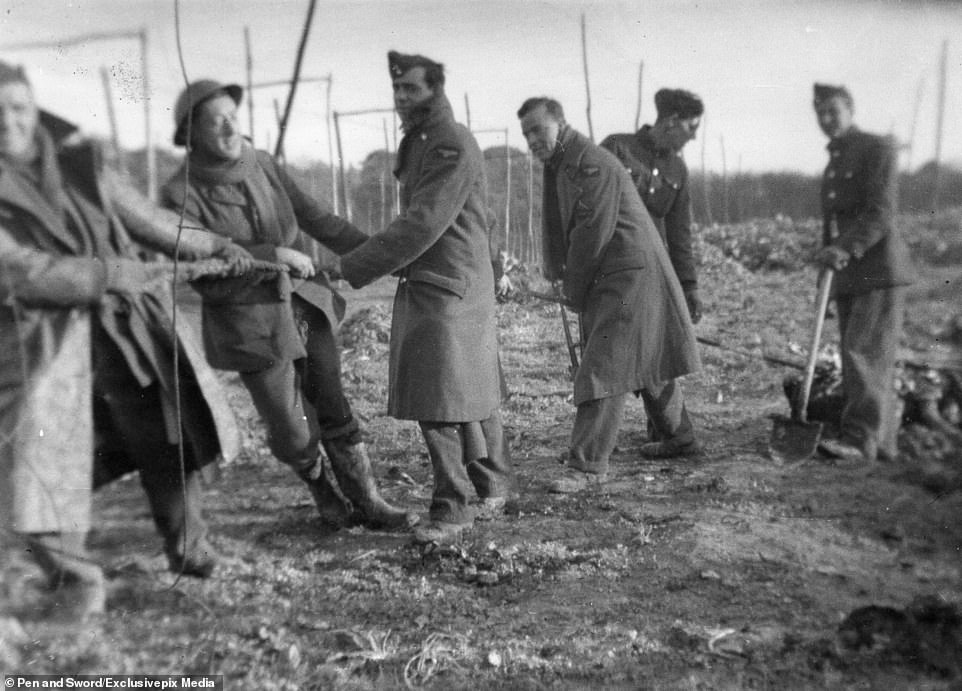 It wasn’t just the transport that sometimes had a hard job. Here, a party from 49 MU drags sections of a crashed aircraft across a Kent hop field. Judging by the empty hop garden and the warm clothing this is either very early in 1940 or much later in the year 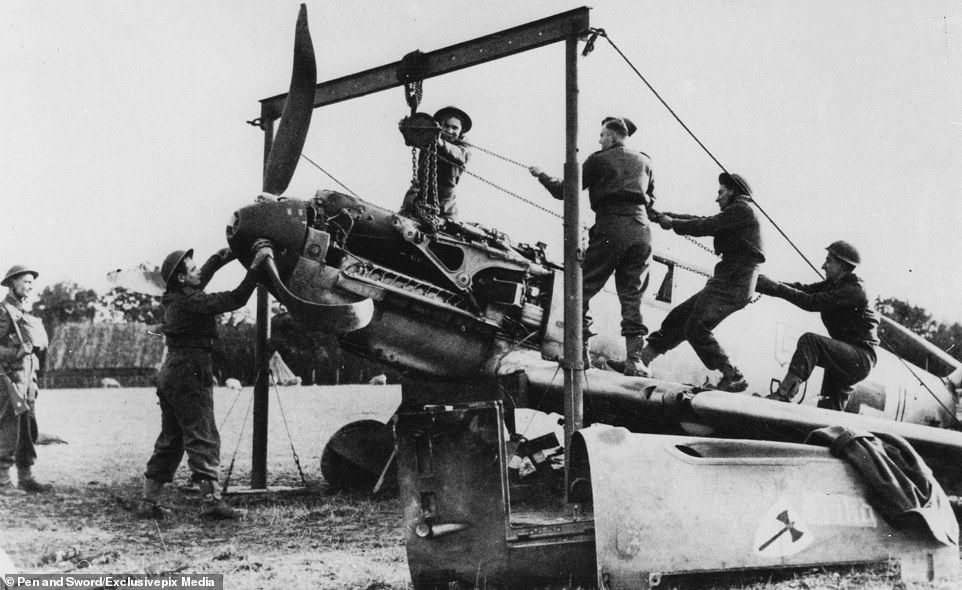 The Royal Engineers lend a hand, helping with a gantry and block-and-tackle as they lift the Messerschmitt 109 flown by Oblt Egon Troha of 9./JG3 who made a forced-landing with a damaged radiator at Westcourt Farm, Sheperdswell, Kent on 29 October 1940 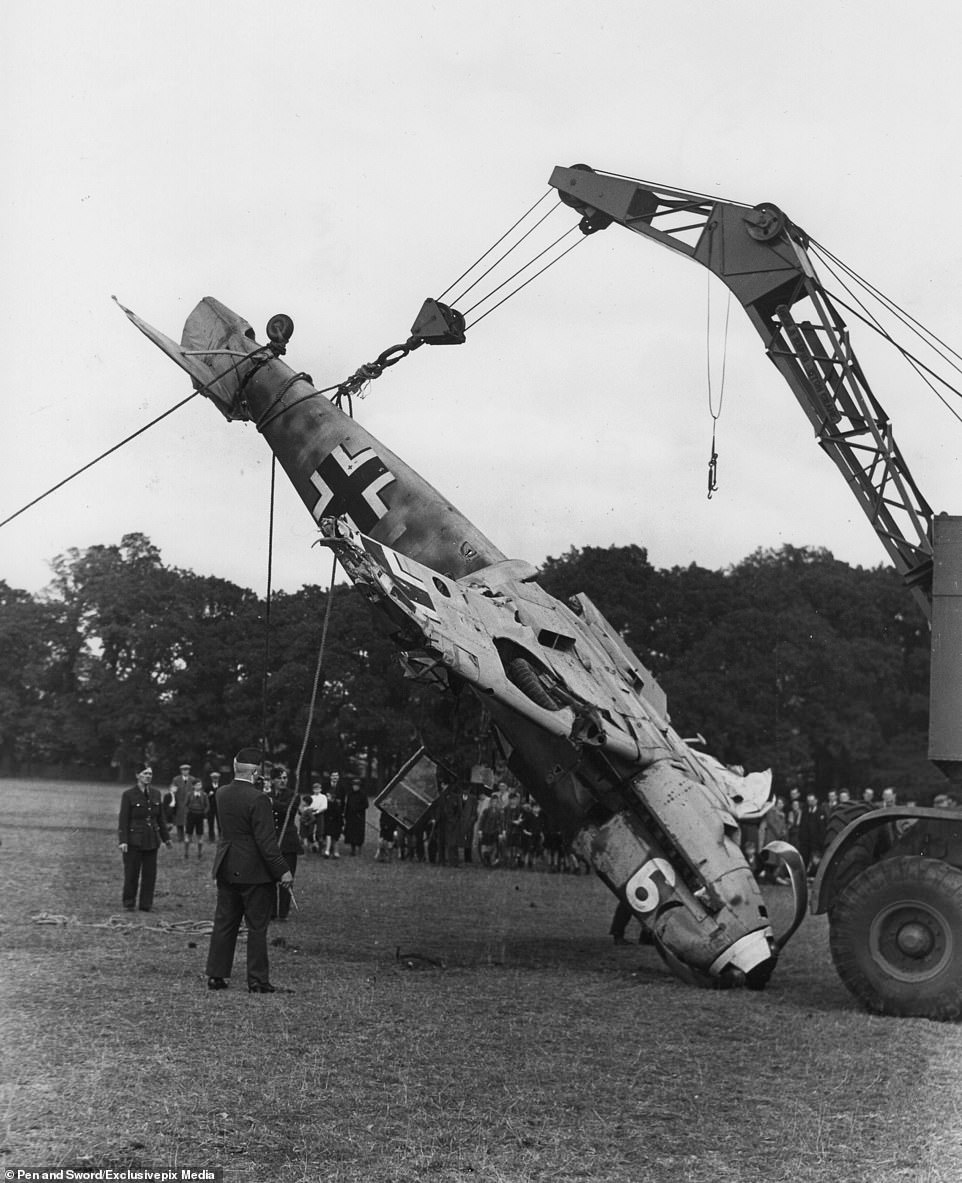 A crane picks up an inverted Messerschmitt on 30 September 1940 in Windsor Great Park when a Messerschmitt 109 of 7./JG27 made a forced-landing there after being damaged by fighters during a bomber escort mission to London. In executing the emergency landing, Oblt Karl Fischer’s Me 109 turned over onto its back although, miraculously, Fischer was captured unhurt after what could easily have been a fatal crash 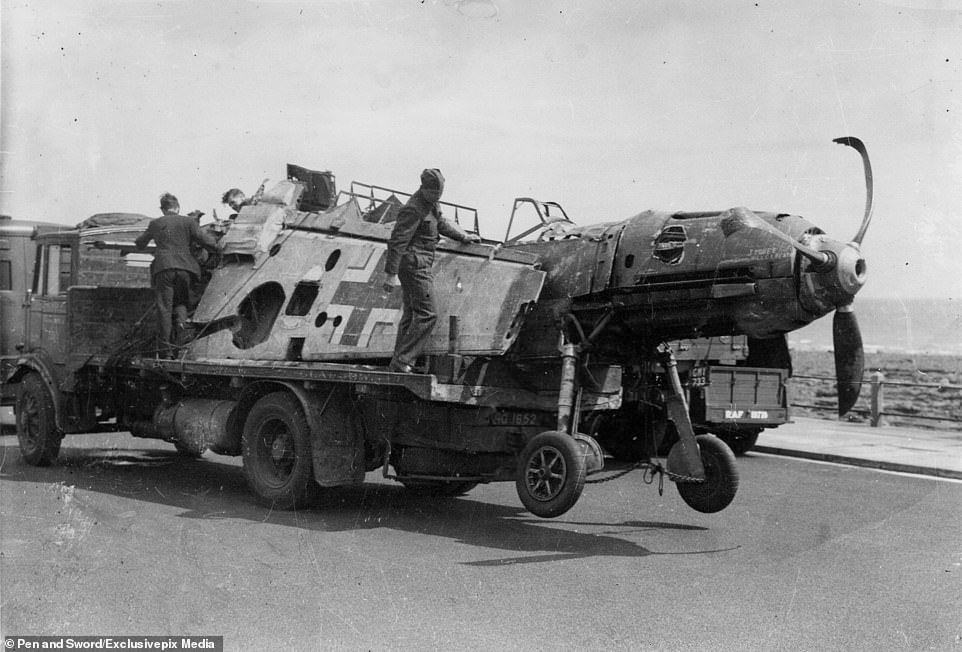 This is the Messerschmitt 109 of Ofw J. Harmeling from 4./LG2 that was shot down at Langenhoe Wick in Essex on 29 October 1940, although this photograph was taken at Victoria Park, Arbroath during 1941 whilst being used for a Spitfire Fund Raising tour of Scotland which included appearances at Glasgow, Stonehaven and Laurencekirk 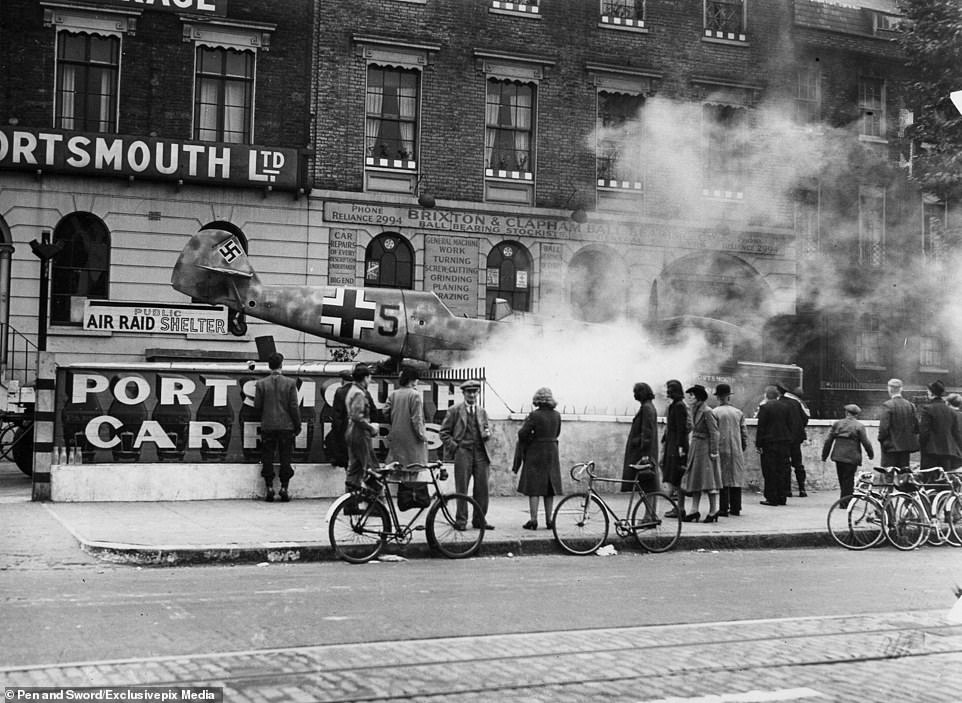 A Messerschmitt 109 was photographed on an RAF Maintenance Unit Queen Mary low-loader in London during October 1940 outside offices at 161 Clapham Road belonging to another civilian contractor engaged by the Air Ministry for the recovery of aircraft wrecks, Portsmouth Carriers Ltd 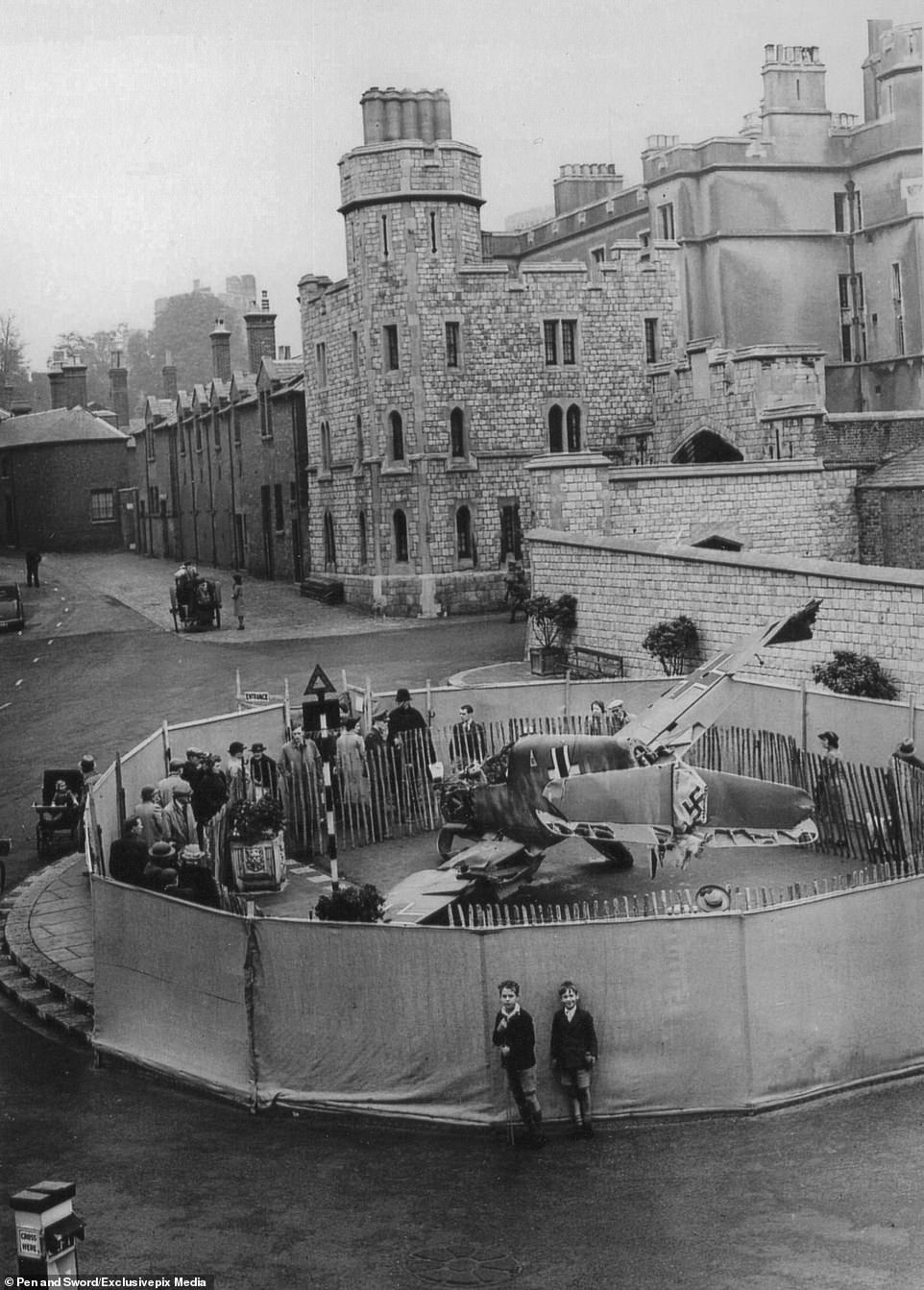 On 3 October 1940 a Messerschmitt plane was displayed to raise money for the Royal Borough of Windsor’s Spitfire Fund. During that time the German fighter was visited by the Princesses Elizabeth and Margaret, with Princess Elizabeth being allowed to sit in the pilot’s seat 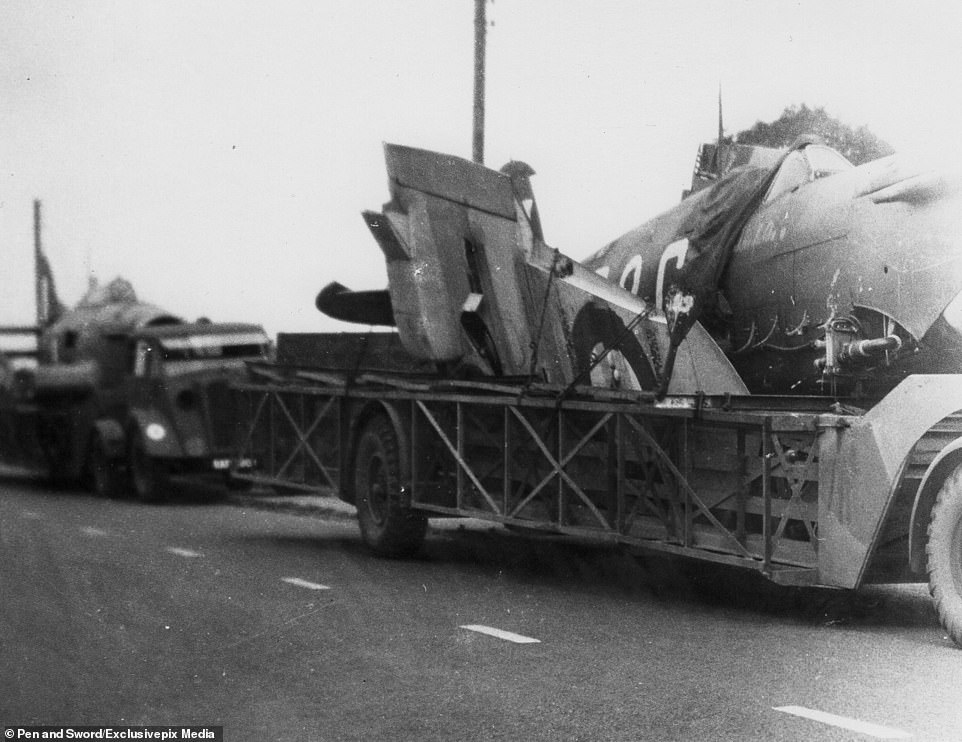 Transporting away aircraft like Hurricane V6799 was generally carried out using the RAF Maintenance Unit Queen Mary trailers like these. Here, a damaged Hurricane and a Spitfire are removed for either repair or spares recovery 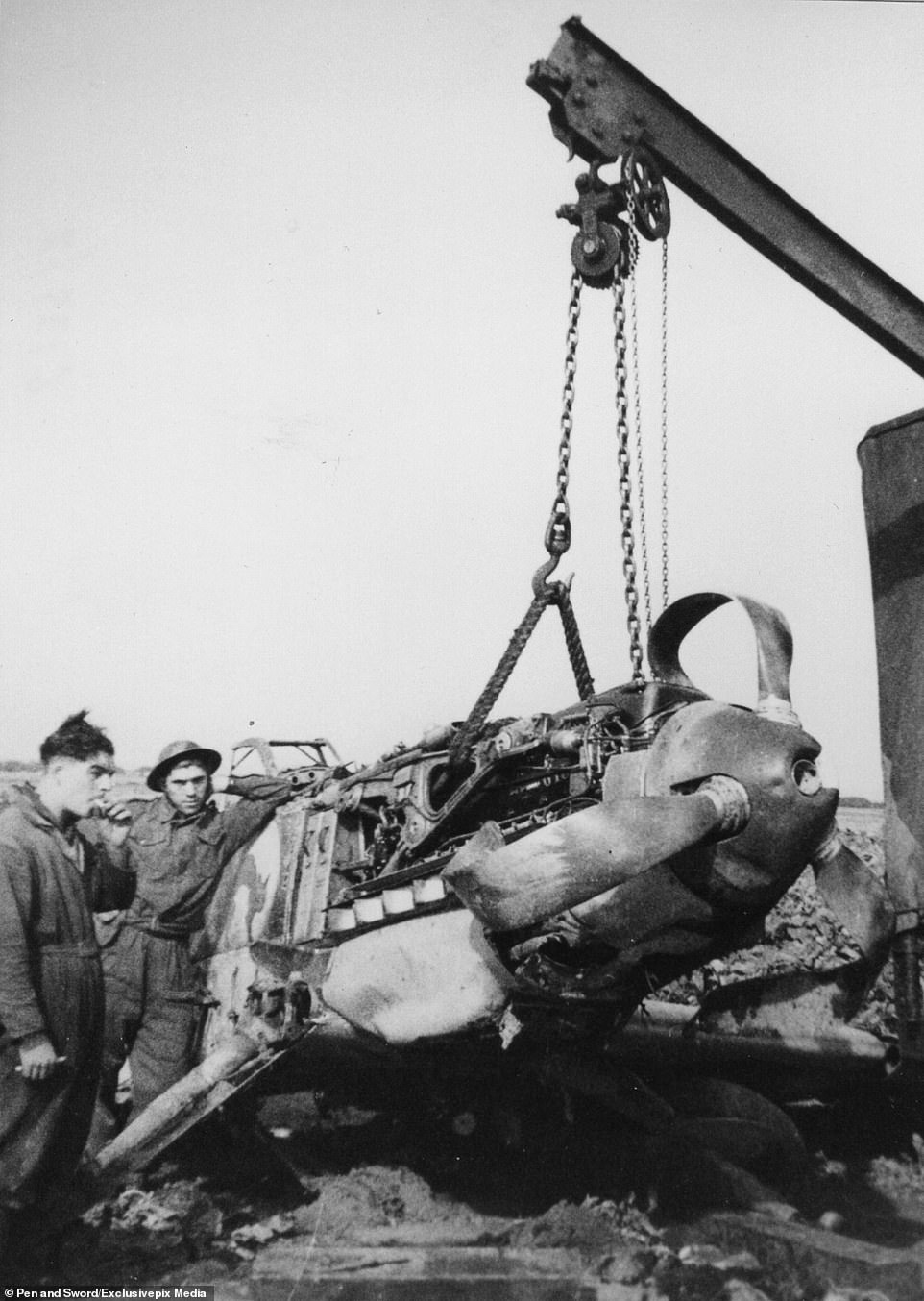 Here was another job for the MU gangs, a Messerschmitt 109. This time, Gefreiter Bogasch’s aircraft is recovered from Northbourne Park near Sandwich after being shot down there on 27 September 1940. It is being lifted with the help of a Royal Engineer party and a lorry-mounted gantry crane, although the recovery party seem singularly disinterested by the task in hand 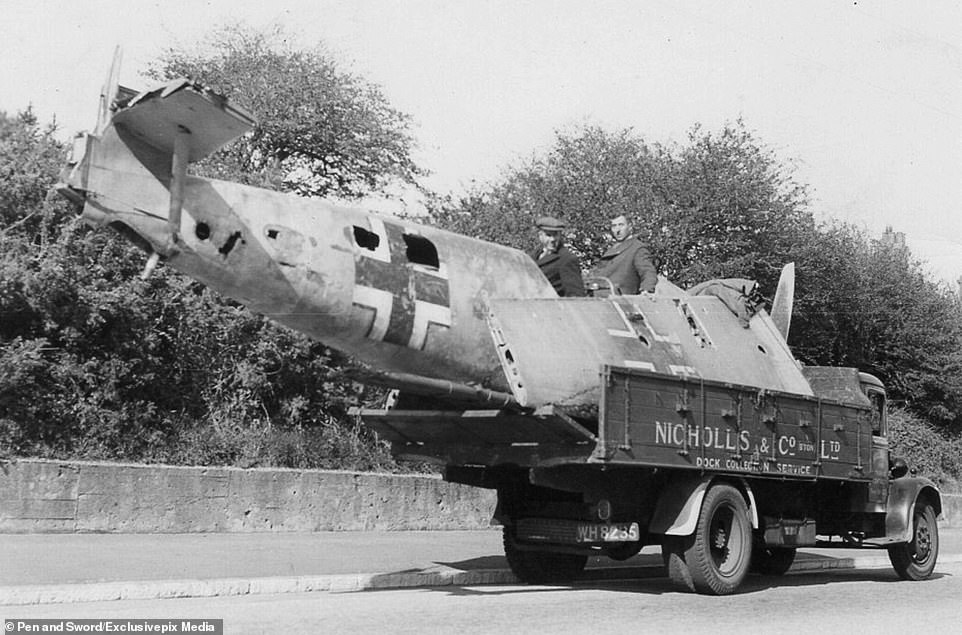 Substantially intact was this Messerschmitt 109 of 3./JG52 which had been shot down at Penshurst Aerodrome, Kent on 27 October 1940. Its pilot, Fw Shieverhofer, was taken prisoner – allegedly by the Spitfire pilot of 74 Squadron who had shot him down and who immediately put down on the Penshurst landing ground to ensure the Luftwaffe pilot’s capture. A rather precariously overhanging load is counterbalanced by its heavy DB 601 engine