Rare piglet baffles villagers after she is born with two heads, two snouts and three eyes

A piglet in the Phillippines has left villagers astounded after she was born with two heads, two snouts and three eyes.

The footage, captured in the village of Calian, Sultan Kudarat, on January 31, shows the rare animal, who was the last to be born in a little of eight, being held by her owner Adelita Dalipe.

The unusual piglet, who has been named ‘Mara Clara’, is being kept in a separate enclosure for her own safety and is being provided with constant care.

The rare piglet is held in front of locals in the village of Calian, Sultan Kudarat, Phillippines 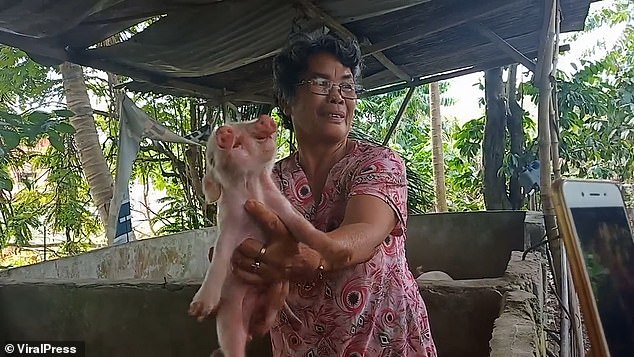 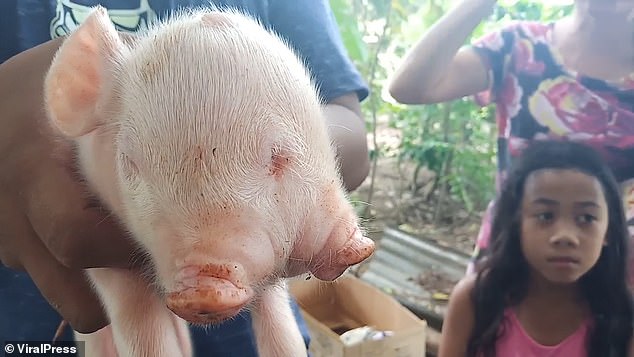 The little piglet was the last to be born from a litter of eight and has two heads, two snouts and three eyes

In the clip, Mara Clara’s owner holds her piglet in front of locals as the animal wriggles in her arms.

She then places the piglet against its mother, who lies in another enclosure, where it can be seen suckling on her nipples.

Despite her rare appearance, the piglet has two functioning snouts that allow it to latch onto her mother’s nipples simultaneously.

Following the piglet’s birth, Ms Dalipe expressed that she was startled by its appearance but now deems the animal to be ‘lucky’.

She told Newsflare: ‘I think that the piglet is lucky. This is so rare. It’s amazing that she survived and that she is healthy.

‘She has a lot of energy just like her brothers and sisters. I will take care of her and give her special treatment.

‘Many people thought that she would not survive. But she is strong and has proved them wrong.’ 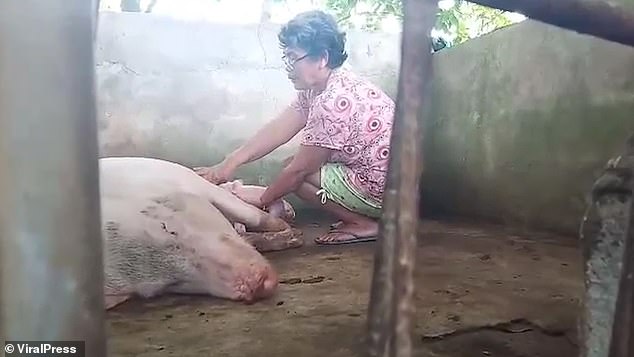 During the clip, Ms Dalipe places the piglet next to her mother and it suckles on her nipples 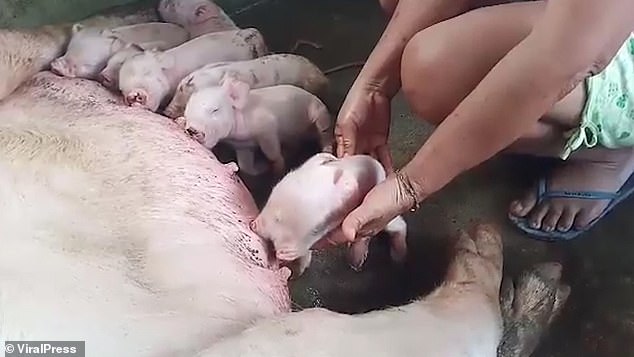 Local veterinarian Allan Alimajen Jr said that the animal has Polycephaly- a condition that results in livestock being born with more than one head.

The rare genetic defect can affect a number of animals including humans.

This is not the first time a pig has been documented with the condition.

In 2016, locals were left baffled when a pig on a farm in Luzhou, south-west China’s Sichuan province, was born with two heads, three eyes, two noses and two mouths.