A California teenager’s rare reaction to medication caused her skin to blister and bubble and nearly killed her.

Ashley Silverman, 14, of Los Angeles, was prescribed medication by a psychiatrist in late November to treat mood swings.

Two weeks later, she developed a painful rash and her skin began ‘melting’ off to such an extent that she had to be transferred to burn unit, reported Fox 11.

Doctors told her father, David, that she had developed a severe reaction to the medication, which received a warning from the US Food and Drug Administration (FDA) on its dangerous side effects.

Ashley’s rash and burns have since cleared, and now she and her dad say they’re sharing her harrowing ordeal to warn others to read warning labels and ask doctors any medication’s side effects. 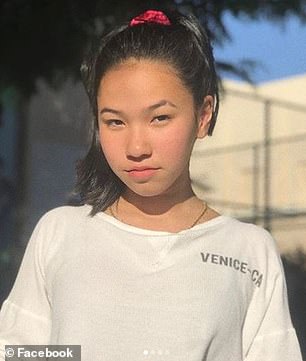 Ashley Silverman, 14 (left and right), of Los Angeles California, was prescribed medication by a psychiatrist in late November to treat mood swings. The doctor told her father that the only reaction she might have is a red rash on her cheeks 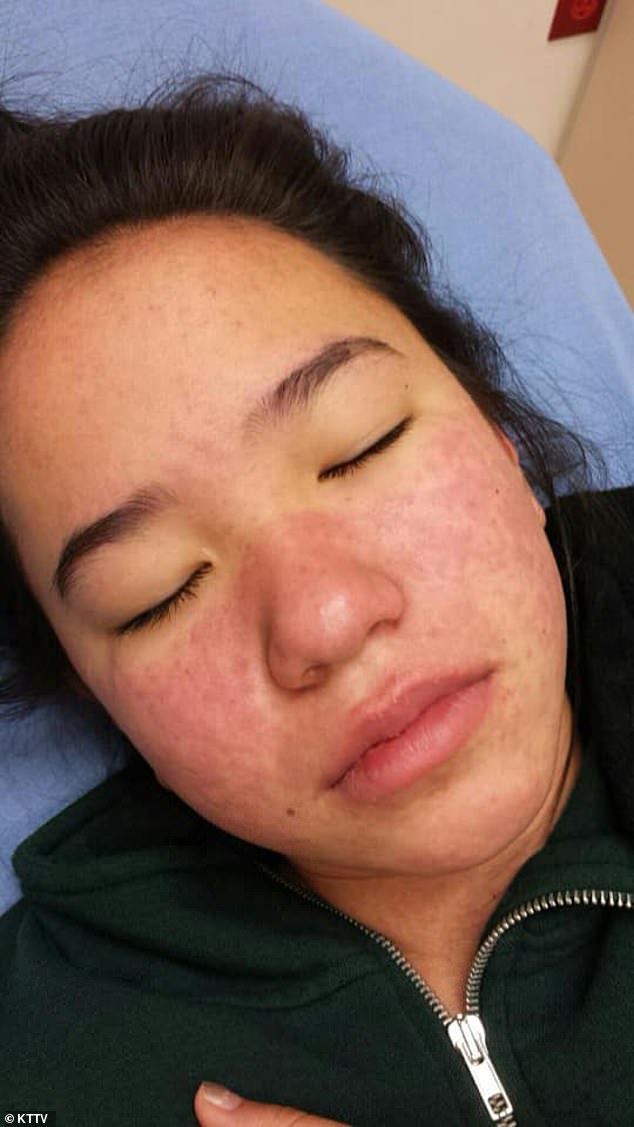 Two weeks later, a red rash did break out on her cheeks (pictured), which was followed by a headaches and a fever. But her father assumed she had the flu

Ashley, a freshman at North Hollywood High School, told Fox 11 that she thought her mood swings were just a normal part of puberty.

‘I thought it was just a teenager kind of thing,’ she said. ‘I didn’t know you needed [medication] for it. I thought everyone went through the same thing.’

The teenager spoke to her counselor at the Los Angeles Unified School District, who referred her to a therapist.

The therapist, in turn, referred her to a psychiatrist, who prescribed Lamictal to treat Ashley’s ‘abnormal mood swings’.

Lamictal is a medication approved by the FDA to treat bipolar disorder and seizure disorders.

The drug has also been used in the treatment of other mood disorders including borderline personality disorder and depression.

However, Lamictal was given a ‘black box warning’ by the FDA due to reports of ‘life-threatening serious rashes…and/or rash-related death.’

Ashley’s father, David, told FOX 11 that he didn’t research the medication but that the psychiatrist told him it was safe.

‘The only thing I was told is that: “Your daughter might get a little red rash on her cheeks, like a minor sun burn”,’ he said.

David said that a red rash did break out on his daughter’s face two weeks later, which was followed by a headaches and a fever.

In fact, one night, her fever reached 104F – but David assumed she had the flu.

He took Ashley to the ER, but doctors couldn’t diagnose her symptoms, so she was transferred to Children’s Hospital LA, where her rash only got ‘At first it was just spots on my face, then they got down my neck, then my chest, and then it started to bubble,’ Ashley told Fox 11. 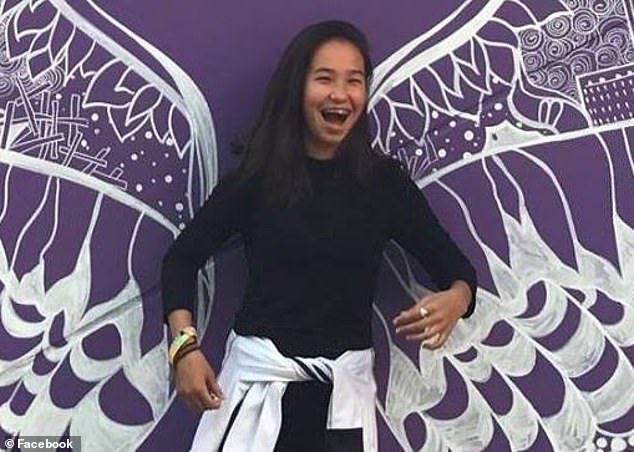 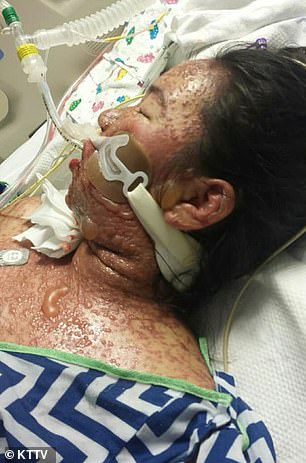 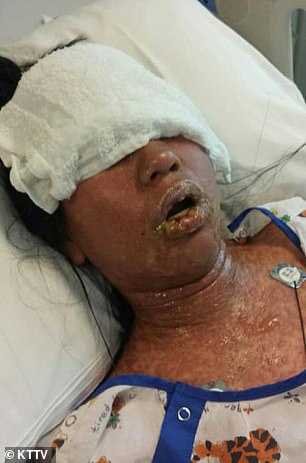 SJS is a rare disorder that occurs as a reaction to a medication or an infection and causes the skin to bubble and blister. Lamictal was given a ‘black box warning’ by the FDA due to reports of ‘life-threatening serious rashes’. Pictured, left and right: Ashley in the burn unit

Doctors diagnosed Ashley with Stevens-Johnson syndrome, a rare disorder that occurs as a reaction to a medication or an infection.

It begins with flu-like symptoms including coughing and fever as well as a red skin rash.

The rash then begins to spread and blisters on the skin as well as the mucous membranes of the mouth and nose.

In severe cases, SJS can lead to complications including pneumonia, sepsis and organ failure. About 10 percent of SJS patients die, according to the Cleveland Clinic.

SJS occurs in about 2.6 to 6.1 cases per million people a year, according to a February 2010 study from the University of Rhode Island.

In the US, about 300 new diagnoses are made each year.

Treatment involves stopping medication if it caused SJS, replacing electrolytes with IV fluids, taking antibiotics to prevent infection and being treated in either an ICU or a burn unit. 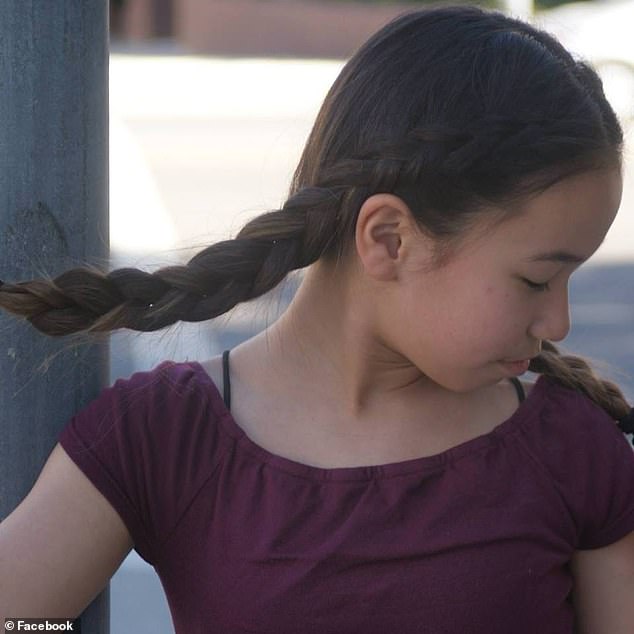 Ashley (pictured) was quickly transferred to the LAC+USC Medical Center burn unit. She was unable to eat or breathe on her own and had to have tubes inserted for both 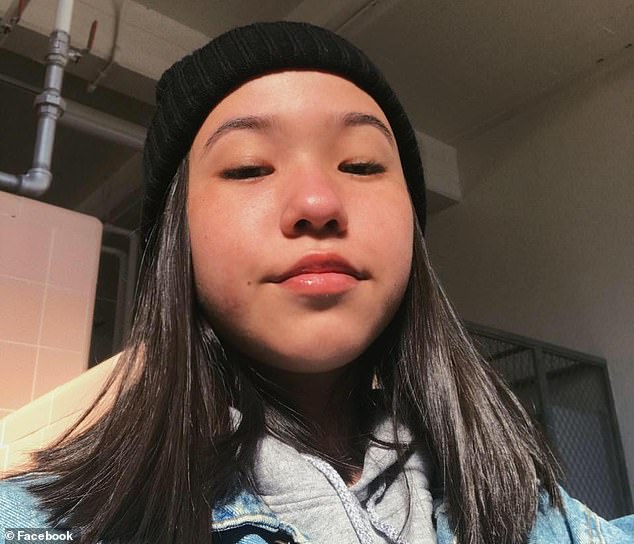 It took about two weeks before Ashley (pictured) started to improve. Her father said the psychiatrist visited Ashley and accepted full responsibility

She was unable to eat or breathe on her own and had to have tubes inserted for both. It took about two weeks before Ashley started to improve.

David said the psychiatrist visited his daughter at the burn unit and accepted responsibility.

‘He just stood in amazement and said: “I’ll take full responsibility for this, it’s my mistake”,’ David said.

‘I don’t think he’s a malicious guy. I think he’s just not informed.’

Ashley’s father says he wants other parents to make sure they do proper research on any drug their child is given.

‘Parents better be very careful what they give their kids, and they’d better research it thoroughly,’ he told FOX 11. ‘I didn’t do tha., I took the advice of a professional.’