Rep. Rashida Tlaib has courted controversy with remarks suggesting the ‘Israeli occupation’ was to blame for the bombing death of an Israeli teenager in the West Bank.

Tlaib’s remarks on Friday came in response to the death of Rina Shnerb, 17, who was killed in a bomb blast while hiking with her family near the Dolev settlement, northwest of Jerusalem.

The Israeli military said it was being treated as a terrorist attack. It was not immediately clear if the device had been planted in advance or thrown.

Tlaib was recently at the center of an international row after she was first denied, and then granted, a visa by Israel to visit her grandmother in the West Bank, but then refused the visa saying it came with unspecified ‘restrictions.’

Rep. Rashida Tlaib has courted controversy with remarks suggesting the ‘Israeli occupation’ was to blame for the bombing death of an Israeli teenager 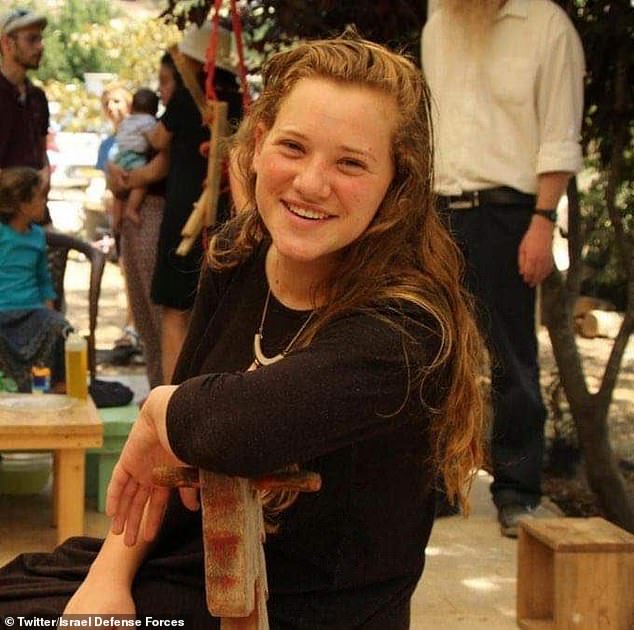 Rina Shnerb, 17, was killed in a bomb blast on Friday while hiking with her family near the Dolev settlement, northwest of Jerusalem. 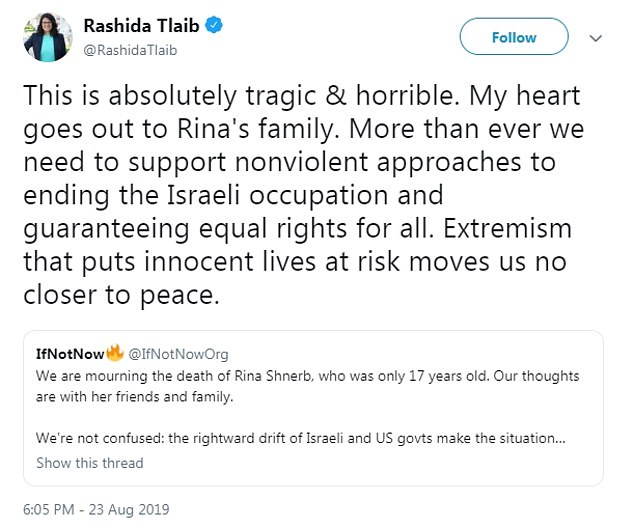 In her latest remarks, Tlaib expressed sympathy for the slain Israeli teen but drew criticism from some for her language.

‘This is absolutely tragic & horrible. My heart goes out to Rina’s family. More than ever we need to support nonviolent approaches to ending the Israeli occupation and guaranteeing equal rights for all,’ Tlaib wrote on Twitter.

‘Extremism that puts innocent lives at risk moves us no closer to peace,’ she continued.

One Twitter user responded: ‘I appreciate your comment. However calling Israel’s presence in the territories an ‘occupation’ is false and hostile language and not conducive to peace.’

Another disagreed: ‘What else to call it? It’s an occupation. Your unwillingness to call it what it is is not conducive to peace’

Israel has controlled the West Bank since 1967, and even the terminology for the situation is hotly contested between pro-Israeli and pro-Palestinian advocates. 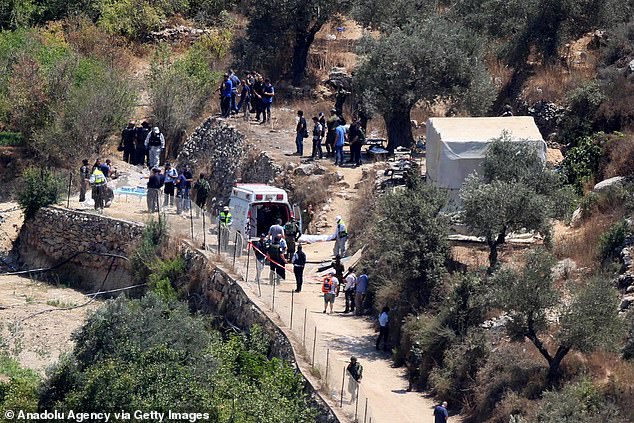 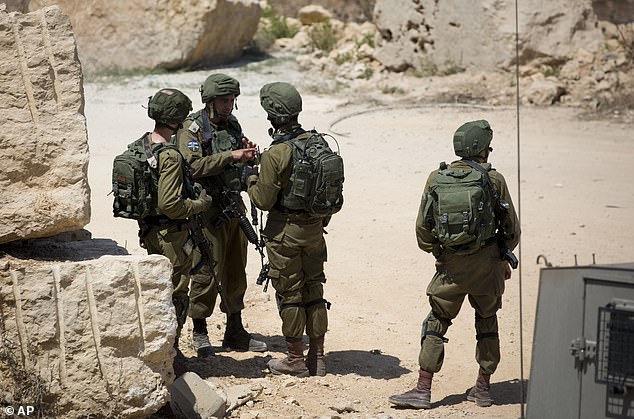 Israeli forces patrol near the area of an attack, west of the West Bank city of Ramallah

Tensions have been high in the West Bank in recent weeks, fueled by clashes between Palestinians and Israeli police at a Jerusalem holy site revered by both.

The clashes erupted at the flashpoint compound, which Jews call Temple Mount and Muslims the Noble Sanctuary, on August 11 as Islamic and Jewish holidays coincided.

Rina, the slain Israeli teen, was hiking with her family at a popular spring when she was killed in a blast.

Israel’s Magen David Adom ambulance service confirmed that her father and brother – named by Israeli media as Rabbi David Eitan, 46, and 21-year-old Dvir – were also injured an in serious condition.

A large crowd of mourners gathered later on Friday for the teenager’s funeral in her home town of Lod, where her body was covered in a white shroud adorned with the Star of David.

‘This is insane, everything that´s happening here. I still can´t believe it,’ said Shnerb’s sister Tamar. ‘Only yesterday you were here, joyful as always, you were happy and made everyone happy, as you always do.’

‘The long arm of Israel reaches all those who seek our lives,’ Netanyahu said in a statement, adding: ‘We will continue to strengthen settlement. We will deepen our roots and strike at our enemies.’ 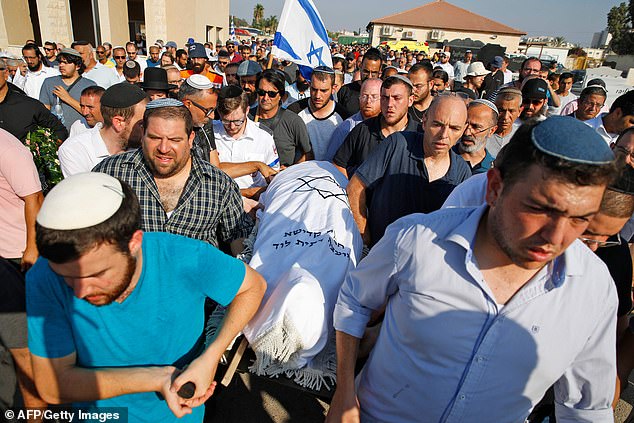 Mourners carry away the body of 17-year-old Israeli Rina Shnerb, who was killed in a homemade bomb attack while visiting a spring near the Jewish settlement of Dolev 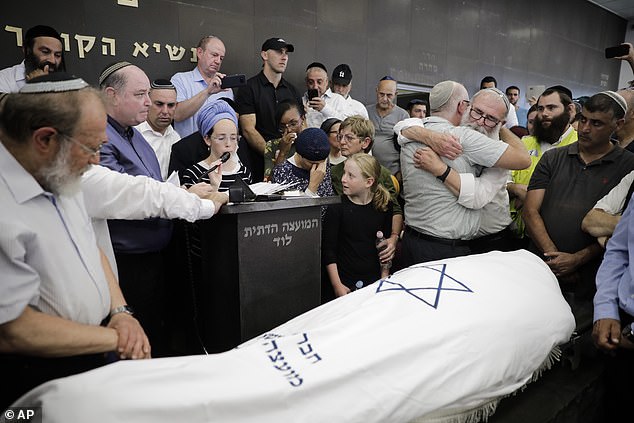 The hilly central region of the West Bank around the settlement of Dolev lies northwest of the Palestinian city of Ramallah, and is studded with olive groves and orchards.

The area saw clashes last year between Palestinians and Israelis, as Palestinian villagers complained that settlers were trying to take over land, including water sources.

On Friday morning, the Israeli military quickly cordoned off the area around the Ein Bobin spring near the Palestinian village of Deir Ibzi’ while soldiers set up checkpoints on roads and searched the area.

An Israeli student, Danny Gonen, was killed at the same spring in 2015 in an attack claimed by a group that said it was affiliated with the Islamist group Hamas.

Hamas leader Ismail Haniyeh praised the latest attack but did not claim responsibility for it, warning Israel not to ‘assault our Jerusalem and our sacred sites’.

In a speech in Gaza he said: ‘I bless this operation and I greet the hands of those who executed it. I pray for God to protect those who stood behind it. Regardless of who they are, they are Palestinians.’

David Friedman, the U.S. Ambassador to Israel, tweeted that he was ‘heartbroken and outraged’. President Donald Trump’s envoy, Jason Greenblatt, urged the Palestinian Authority to ‘unequivocally condemn’ the attack.