Raymond van Barneveld overcomes food poisoning to set up showdown with world No 1 Gerwyn Price, but Fallon Sherrock is left to rue missed chances after defeat by Ricky Evans at World Darts Championship

Five-time champion Raymond van Barneveld overcame a bout of food poisoning and losing the first set to get his 30th world championship appearance under way with a 3-1 win over Ryan Meikle.

Van Barneveld, who reached the semi-finals in the Grand Slam of Darts last month, averaged 115.6 to win the second set and then took advantage of a dip in form from his opponent to set up a third-round clash with world No 1 Gerwyn Price.

‘I’m so happy that I won,’ the 55-year-old said. ‘Yesterday we went to the old Chinese restaurant in Piccadily Circus; I was in bed the whole day with food poisoning and could not practice today.

‘Three darts in practice, I was tired, sitting down and not well. My whole stomach was gone today and I was thinking if I manage to play tonight I’m already happy. To play like this, wow.’

Fallon Sherrock was left to rue a number of missed chances as she lost to Ricky Evans in the first round of the PDC World Darts Championship.

Three years after becoming the first female player to win a match, and subsequently, two consecutive matches in the event, Sherrock won the opening set against Evans at Alexandra Palace.

The Women’s World Matchplay winner had four darts at a double to win the third set before busting on five, while she also led 2-0 in the fourth set and missed two darts to win it before Evans took out 107 to seal a 3-1 win. 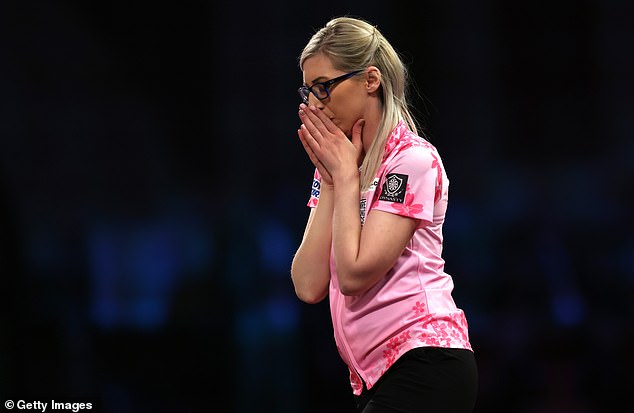 ‘I knew it was going to be tough but I didn’t expect it to be that tough,’ a relieved Evans told Sky Sports.

‘She is so good. The thing is people are cheering because it’s a lady player, they don’t respect how good she is actually at darts. She was the better player in that game.

‘I got away with that and I’m so happy to win. I’m chuffed to bits.’

Earlier, Jim Williams twice came from a set down to beat Polish teenager Sebastian Bialecki 3-2 and will face James Wade in round two, while Jimmy Hendriks defeated Jamie Hughes 3-1.