The Royal Bank of Scotland last night offered a ‘sincere apology’ after admitting that staff had forged a customer’s signature.

RBS conceded that a fake signature had been used on an official document, which means a customer was signed up to a financial product she did not want.

The confession comes only two weeks after The Scottish Mail on Sunday published claims by whistleblowers that bank staff had been trained to forge signatures.

The allegations were strenuously denied by RBS.

But for the first time it has publicly acknowledged an element of truth to the allegations of widespread malpractice.

The bank was forced to apologise after retired teacher Jean Mackay came forward with paperwork that clearly showed her signature was faked on a bank document.

The great-grandmother said RBS began charging her a fee for payment protection insurance (PPI) – even though she had declined to sign up for it.

When Mrs Mackay, of Forres, Moray, challenged the bank, staff gave her a document purporting to show she had agreed to the fees.

However, two signatures on the same document – one agreeing to take out a credit card, the other apparently agreeing to pay PPI – are markedly different.

The bank later refunded her fees but refused to admit the document had been forged.

Last night, as a graphologist confirmed the signatures are ‘not a match’, the bank finally apologised and offered £500 compensation.

Meanwhile, a campaign group fighting to expose wrong-doing in banks has pledged to raise Mrs Mackay’s case in the Commons and demand that the bank comes clean about any other forgeries.

Mrs Mackay said: ‘It was a fraud, not my signature. If I had forged my name on something, it would be a police matter. They should not get away with doing things like that to people who are trusting them.’

Graphologist Emma Bache, who has almost 30 years’ experience as a handwriting expert, examined the document.

She said: ‘The numerous and significant differences suggest they are unlikely to have been written by the same individual, as fundamental and unique handwriting characteristics are not a match.’

The latest disclosures will add further weight to demands for an urgent investigation into claims of illegal practices by the bank.

When Mrs Mackay challenged the bank, staff gave her a document purporting to show she had agreed to the fees. However, two signatures on the same document – one agreeing to take out a credit card, the other apparently agreeing to pay PPI – are markedly different (pictured)

In 2008, Mrs Mackay decided to take advantage of an RBS credit card balance transfer offer of zero interest for 12 months and signed paperwork at its Forres branch.

Mrs Mackay said: ‘I was talked through the form. I was asked if I wanted to take out protection insurance. I said no, I don’t need that.’ She signed one box agreeing to the terms of the credit card but did not sign a second box agreeing to PPI.

Months later she realised she was paying more money than she had anticipated. She said: ‘I queried it and they said it was the PPI. I said, “No, no, I didn’t ask for that at all”.’ I asked to see the document. I said, “That’s not my signature”.’

But Mrs Mackay said: ‘That wasn’t the point. Someone had forged my signature. I asked them to accept my name had been forged on an official document. I took it to the local branch, then I went to head office. They insisted I had signed it. I was really annoyed.

‘I had a phone call that was made in quite a threatening tone, from a bank official a couple of years after it started. I just ignored it.’

She contacted the Financial Ombudsman in 2011 but the watchdog suggested she might have signed the second box later, or in a hurry, or her signature had varied.

In a 2013 letter, an incredulous Mrs Mackay told the Ombudsman there were ‘glaringly obvious differences’.

She wrote: ‘I am not senile nor a liar, nor am I intent on defrauding the bank. I have pursued this complaint for over four years expecting, at the very least, an apology, but becoming ever more frustrated by the bank’s refusal to accept my word and denying all responsibility or liability.’

At one point, the bank offered Mrs Mackay £100 compensation but accepted no blame. She refused.

A cancer diagnosis in 2014 forced Mrs Mackay to give up her campaign – but then she saw the whistleblowers’ revelations in The Scottish Mail on Sunday. 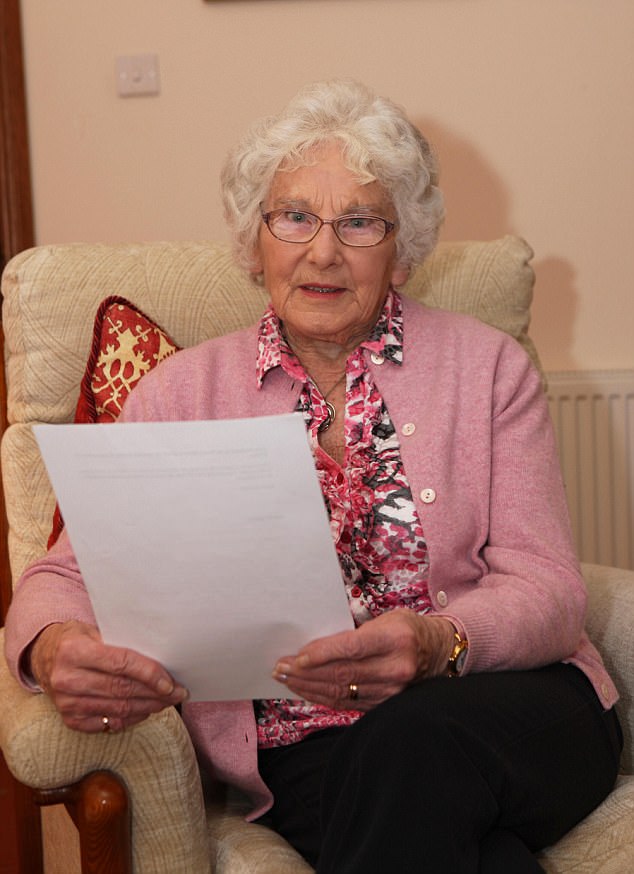 She said: ‘I thought, at last, something’s being done. There could be many people who have been conned and not picked it up, or didn’t know what to do.’

When we confronted RBS with Mrs Mackay’s documents, the bank finally relented.

Although suggesting the forgery had been an ‘isolated incident’, the bank offered Mrs Mackay a ‘sincere apology’ and compensation. By way of explanation, the bank said that staff had previously received a bonus if they signed up customers to take extra services such as PPI.

A spokesman for RBS said: ‘The incident took place nearly ten years ago and so we are unable to look at the case again in detail.

‘However, at the time a full investigation was carried out and it was found to be an isolated incident in that branch. Based on the information we have available today we would like to offer a sincere apology and compensation of £500.’

The bank said staff no longer receive incentives to sell extra products or services and that the individual involved in this case no longer works for the bank.

Two weeks ago we told how managers were coached in how to fake names on key papers.Whistleblowers said staff received guidance on how to download genuine signatures from the bank’s online system, trace them on to new documents then photocopy the altered paperwork to prevent detection.

Although clearly against the law, the whistleblowers claim it was commonly done to speed up administration and complete files. They claim the technique was also used to sign account opening forms – and even loan documents.

Steve Middleton, chief adviser at BankConfidential, an organisation for whistleblowers which exposes the unacceptable practices of big banks, said: ‘This provides further evidence of the systemic fraud and deceit at RBS. I commend Mrs Mackay for speaking out.

‘We’ve written to the Treasury Select Committee about practices, including fake signatures. We’re pushing for a proper inquiry.’