RBS is to shutter 275 branches across England and Wales

Taxpayer-backed RBS is to close up to 275 branches to cut costs – despite it making more than a billion pounds in profit.

Chief executive Ross McEwan said the axe will fall on English and Welsh outlets run under the Royal Bank of Scotland brand.

Many are near branches operated under RBS’s NatWest brand and customers will be able to use those instead.

The cuts will be on top of 180 closures already announced, triggering fresh fears for the future of High Street banking.

Campaigners warn that small businesses, the elderly and vulnerable people suffer most when branches are shut.

The announcement of the latest closures came as the bank unveiled a profit of £1.2billion for the first three months of 2018 – up 70 per cent on a year earlier.

The result suggests RBS is finally turning a corner after disgraced boss Fred Goodwin took it to the brink of collapse in 2008, almost destroying the economy at the same time.

It paves the way for the bank to start paying dividends again to its legion of small shareholders and for the Treasury to start selling taxpayers’ 71.5 per cent stake.

RBS was previously ordered to sell 275 branches to satisfy competition regulators as a condition of its £46billion government bailout during the financial crisis.

It spent almost a decade trying to split them off as a new bank called Williams and Glyn but this was too complicated. 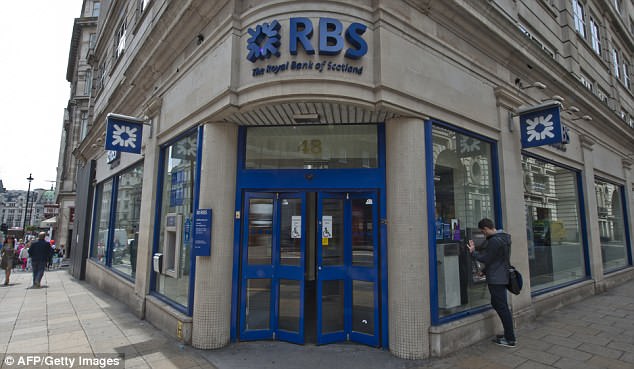 The announcement comes the bank unveiled a profit of £1.2 billion, a sign that it is turning a corner after it nearly collapsed

Instead, RBS is launching a £775million fund to help rivals improve their business banking to satisfy the demands of competition watchdogs. It means the lender is finally able to close the branches, saving millions on staff and rent.

Mr McEwan said customers are deserting bricks and mortar banking for the internet and his closure programme is following this trend.

He added fierce competition in the mortgage market is also holding RBS profits back.

But Mike Cherry, of the Federation of Small Businesses, said: ‘With RBS’s finances improving, it’s disappointing to see the majority taxpayer-owned bank continuing to reduce in-person support for the public.

‘RBS should return the support it has received from the public by meeting business and consumer demand for a properly resourced branch network.’

RBS is still waiting to receive a multi-billion pound fine for mis-selling toxic US mortgages in the run-up to the financial crisis. Once this is settled, payouts and a share sale are likely to begin.