Almost 1.7 million homes in England and Wales with an EPC rating between D and G cannot be improved to reach a C rating, according to new research by Rightmove.

Having analysed the energy efficiency ratings of over 15 million properties, it found that a significant number of homes lack the potential to achieve an EPC of C.

A poor EPC rating not only equals higher fuel bills, but it could also mean homes fall short of Government targets in future and potentially even find themselves locked out of certain mortgage deals.

Currently, 59 per cent of homes have a D rating or worse, according to Rightmove, and 11 per cent will never obtain a C rating even if the recommended energy saving improvements are made.

The Climate Change Committee is proposing all UK homes reach an EPC of band C in order to help the government meet its net zero carbon target by 2050.

EPC is a rating scheme which bands properties between A and G, with an A rating being the most efficient and G the least efficient.

An EPC is required whenever a property is built, sold or rented and anyone failing to have one can be fined.

It displays the current energy efficiency rating of a home and the potential rating the home could be awarded if improvements are made.

The Government’s current aim is to have as many homes as possible reach a C rating by 2035 in England and Wales, with an earlier target of 2030 for private rented homes.

Which parts of the UK are most at risk?

There are estimated to be a 11 million homes in England and Wales that do not yet have an EPC rating, according to Rightmove. This is likely because they have not been sold or let out since the certificates were introduced.

But based on available EPCs, Tower Hamlets and Hackney in London have the lowest proportion of properties with a current rating of D or below – 27 per cent and 39 per cent respectively.

Crawley has the biggest scope for improvement, as upgrades would reduce the proportion of its homes below a C rating from 47 per cent to just 5 per cent. 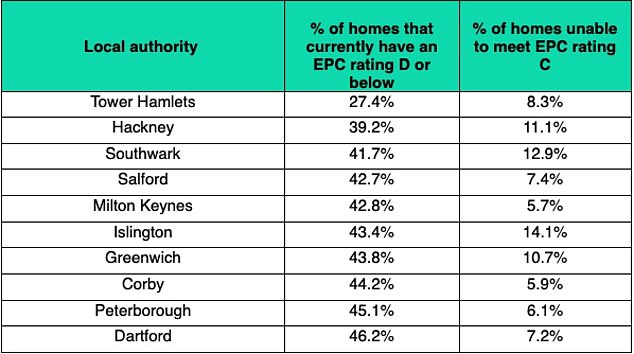 Ten areas with the lowest proportion of homes with an energy rating of D or below.

But other UK locations face a much bigger challenge in increasing the energy efficiency of their properties.

In Gwynedd in Wales over 77 per cent of homes have a rating of D or below, and this could only improve to about 22 per cent if recommended improvements were made. 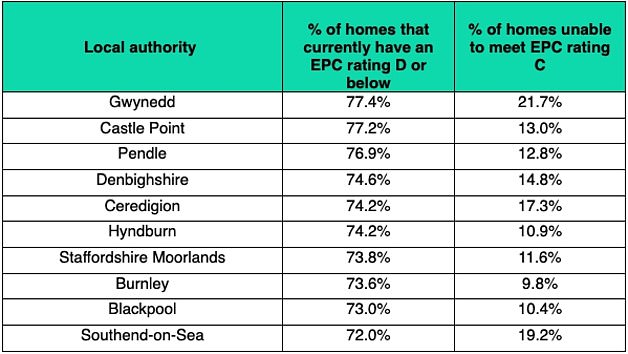 Ten areas with the highest proportion of homes with an energy rating of D or below.

But perhaps most at risk, are some of the homeowners and landlords who own property off the gas grid – particularly in rural areas.

Mort than one million homes in the UK currently use oil for heating, according to Ofgem.

On top of all the other necessary energy saving improvements, replacing oil with a low-carbon heating alternative could cost a homeowner in excess of £30,000, according to Liquid Gas UK.

Over a quarter of rural households living off the gas grid have said that they would not be able to afford a new heating system at any price, based on recent polling.

In fact, only 7 per cent rural off-grid households suggest they would be able to afford the estimated average cost of a heat pump system – ranging between £11,000 and £18,000.

‘While ambitious EPC targets and proposals are well intended, if the methodology is left unaddressed, the effect of this on properties off the gas grid is profound,’ said George Webb, chief executive of Liquid Gas UK.

‘Rural homeowners will be pushed into spending thousands extra on energy efficiency improvements than they need to or can afford, as well as likely damage to the rural housing market.

‘The high upfront costs also encourage rural homes to stick with high carbon fuels such as oil, rather than move to lower carbon solutions.’

Is there cause for concern just yet?

Homeowners who will find it expensive – or indeed impossible – to improve the energy efficiency of their properties may be concerned by murmurings that the Government’s energy efficiency targets could be brought forward. 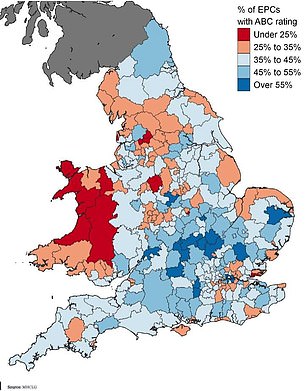 There are currently about 29 million homes in the UK, of which 19 million have an EPC lower than C

A staggering 21 per cent of total carbon emissions in the UK come from our homes, according to the Energy Saving Trust.

To reach its Net Zero 2050 target the UK Government has announced it aims to cut carbon emissions by 78 per cent by 2035.

To achieve this target, the Climate Change Committee, which is advising the UK Government, has recommended that all homes should have an EPC rating of C from 2028.

As for privately rented homes, the government itself has recently published a consultation in which it proposes bringing this further forward for some landlords, with all new tenancies requiring a C rating by 2025.

The Government is also considering proposals to set mortgage lenders ambitious targets relating to energy performance, requiring them to factor these into their lending decisions.

Although nothing has been decided, there are growing signs that homeowners living in energy inefficient homes may soon find themselves under pressure to improve them.

Mortgage lenders, for one, appear to be beginning to factor EPCs into lending decisions.

Last week for example, Virgin Money launched a new mortgage offering lower rates of interest to customers buying new build homes which have an EPC rating of A or B.

The rates, which start at 1.25 per cent, are 0.1 per cent lower than the equivalent rates on offer for other buyers applying for a Virgin Money mortgage.

‘We want to give our customers the chance to make a greener choice in their finances,’ said Hugh Chater, chief commercial officer at Virgin Money.

‘Our Greener Mortgages reward customers who choose a more energy efficient new build home with a lower interest rate meaning their mortgage is kind to both the environment and their wallet.’

The lender is just the latest to join a growing list of banks and building societies incentivising homebuyers to purchase energy efficient properties.

Nationwide Building Society and NatWest already offer cashback to those buying a property with a high energy efficiency rating, and Paragon Bank has launched a range of lower-deposit mortgages for landlords whose properties are more energy efficient.

‘There are a number of homeowners who don’t feel an urgent need to make changes now unless it makes a big difference to the cost of their household bills or if it’s going to make their home more attractive to a potential buyer if they’re planning to sell,’ says Tim Bannister, director of property data at Rightmove.

‘It’s early days with some lenders now starting to introduce green mortgages as incentives, but homeowners need to be better informed that how green your home is will become increasingly important as we aim to move towards a net zero society, and they need more help to understand why making improvements are so important for the long term.’

So what can be done?

For homeowners in properties which have the potential to improve, there are many ways to do so.

At the costliest end of the spectrum, homeowners can fit double glazing, loft and wall insulation, install solar panels or fit an efficient secondary heating source such as a heat pump.

But there are cheaper ways of boosting one’s EPC rating.

The second most common recommendation, mentioned in over five million EPCs, is to switch to low-energy lighting. This is one of the cheapest ways to improve energy efficiency

‘It’s encouraging to see that there are some energy efficiency improvements that can cost less than £100, so it’s definitely worth checking your EPC if your home has one to see if there are small changes you could make to try and improve your rating,’ says Bannister.

‘The bigger challenge is for those homes with much lower ratings that will cost a substantial amount of money to improve.’

For the homes that require more work, the costs of improvement will be much more alarming.

The average D rated property would need on average £12,746 spent to reach a C band, according to analysis by Savills. 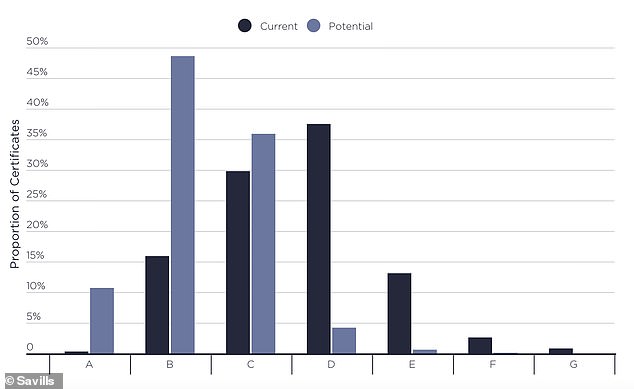 Much will depend on the type of upgrade required to bring a property up to acceptable standards.

According to the green energy supplier GreenMatch UK, the installation cost for an air source heat pump ranges between £8,000 and £18,000.

A ground source heat pump will be even more expensive, ranging between £20,000 to £40,000 per installation.

Solid wall insulation is around £100 per square meter according to the tradesman site, myBuilder, meaning that for a larger detached property, it could amount to more than £20,000.

The average under floor insulation cost starts at around £770 for smaller rooms with a suspended flooring, according to Checkatrade, rising to £2,200 for larger rooms with a solid floor.

Installing solar panels on a typical UK property will cost around £6,000 to cover around 29 square metres of the roof, according to GreenMatch UK.

What about those who can’t improve?

The Department for Business, Energy and Industrial Strategy claims no one will be prevented from selling their home because they do not meet EPC band C in the future.

It says it aims to encourage homeowners and landlords to improve their properties – where possible – via a combination of incentives, grants and regulation.

BEIS estimates that its regulations will see landlords encouraged to carry out home improvements such as loft insulation, double glazing and cavity wall insulation in around 290,000 properties.

It is also looking to create a policy that will encourage mortgage lenders to lend to all homes in order to improve their energy efficiency.

The cost of home improvements to move between EPC bands, as estimated by Savills

‘Eliminating our contribution to climate change will involve virtually eliminating emissions from homes by 2050, and this will require improvements and changes to homes over the coming decades, including improving energy efficiency and switching to low carbon heat,’ said a BEIS spokesperson.

‘We are supporting homeowners to improve their homes, including committing £150million to the Home Upgrade Grant which supports homeowners with upgrades to the worst performing off gas grid homes in England, and £500million of funding delivered through local authorities to upgrade over 50,000 low-income households in England.’

‘We recognise that some properties will not be able to meet EPC band C and are taking this into account in our policies – for example, there are exemptions from the private rented sector minimum standards where improvements are not technically possible or where the cost of the work is too high.’

But if the Government is serious about meeting its 2050 net zero target, millions of homeowners and landlords might have to start thinking ahead.

‘What we don’t want to see is anyone penalised if they’re unable to make the step up to the necessary energy efficiency ratings cost effectively through no fault of their own,’ said Bannister.

‘People need to know what improvements can be done, funding options to support those improvements and also clarity on any exemptions if all improvements have been made.’