The Ickabog is said to be for ‘children on lockdown, or even those back at school during these strange, unsettling times’.

Miss Rowling, 54, began publishing it online yesterday in daily instalments. It is her first children’s novel since the final Potter novel in 2007. Miss Rowling wrote it more than a decade ago and had intended to release it after The Deathly Hallows. But after reading it to her children, she put the script – part typed, part handwritten – in the attic.

She said she was recently ‘immersed in a fictional world I thought I’d never enter again’ after her children, now teenagers, were ‘touchingly enthusiastic’ about her returning to the story. In a series of messages on Twitter page, Miss Rowling revealed the work had been kept in a ‘very dusty’ Net-A-Porter box that ‘might well have held a premiere dress’.

The first two chapters were published on The Ickabog website yesterday, introducing King Fred the Fearless and five-year-old Bert Beamish. There will be daily updates until July 10. The Ickabog is a fearsome monster that is said to eat children and sheep. Miss Rowling has asked young readers to draw their own illustrations to go with the story.

The best pictures will be included in the published book in November, with royalties going ‘to help groups who’ve been particularly impacted by the pandemic’. 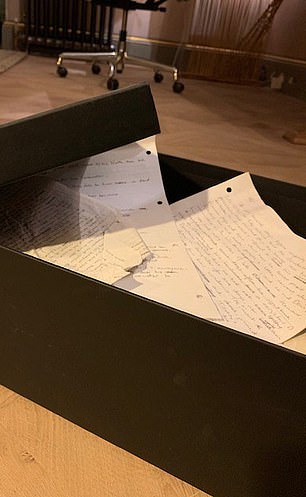 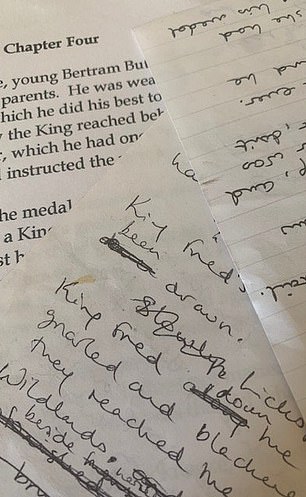 Rescued from the attic: The author shared pictures on Twitter of her original manuscript

‘I think The Ickabog lends itself well to serialisation because it was written as a read-aloud book (unconsciously shaped, I think, by the way I read it to my own children), but it’s suitable for seven to nine-year-olds to read to themselves,’ she said, describing the story as being about ‘truth and the abuse of power’.

But she insisted that ‘it isn’t intended to be read as a response to anything that’s happening in the world right now’, adding: ‘The themes are timeless and could apply to any era or any country.’ 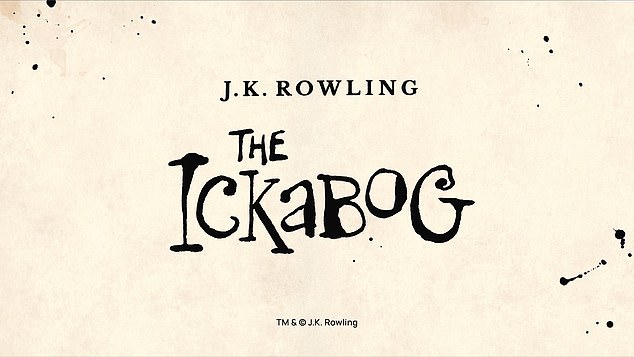 The Ickabog is said to be for ‘children on lockdown, or even those back at school during these strange, unsettling times’

Once upon a time, there was a tiny country called Cornucopia, which had been ruled for centuries by a long line of fair-haired kings.

The king at the time of which I write was called King Fred the Fearless.

He’d announced the ‘Fearless’ bit himself, on the morning of his coronation, partly because it sounded nice with ‘Fred’, but also because he’d once managed to catch and kill a wasp all by himself, if you didn’t count five footmen and the boot boy.

King Fred the Fearless came to the throne on a huge wave of popularity.

He had lovely yellow curls, fine sweeping moustaches and looked magnificent in the tight breeches, velvet doublets and ruffled shirts that rich men wore at the time.

Fred was said to be generous, smiled and waved whenever anyone caught sight of him and looked awfully handsome in the portraits that were distributed throughout the kingdom, to be hung in town halls.

The people of Cornucopia were most happy with their new king, and many thought he’d end up being even better at the job than his father, Richard the Righteous, whose teeth (though nobody had liked to mention it at the time) were rather crooked.

King Fred was secretly relieved to find out how easy it was to rule Cornucopia. In fact, the country seemed to run itself.

Nearly everybody had lots of food, the merchants made pots of gold, and Fred’s advisors took care of any little problem that arose.

All that was left for Fred to do was beam at his subjects whenever he went out in his carriage and go hunting five times a week with his two best friends, Lord Spittleworth and Lord Flapoon.

Spittleworth and Flapoon had large estates of their own in the country, but they found it much cheaper and more amusing to live at the palace with the king, eating his food, hunting his stags, and making sure that the king didn’t get too fond of any of the beautiful ladies at court.

They had no wish to see Fred married, because a queen might spoil all their fun.

For a time, Fred had seemed to rather like Lady Eslanda, who was as dark and beautiful as Fred was fair and handsome, but Spittleworth had persuaded Fred that she was far too serious and bookish for the country to love her as queen.

Fred didn’t know that Lord Spittleworth had a grudge against Lady Eslanda. He’d once asked her to marry him, but she’d turned him down.