Fulham returned to second in the Championship and ended a five-match winless run in formidable style, helped on their way by Reading’s increasing tendency towards self-destruction.

Two goals from the excellent Harry Wilson, a brace from Aleksandar Mitrovic to make it 24 fo the season and further strikes from Kenny Tete, Neeskens Kebano proved more than enough to restore the promotion hopefuls handsomely to winning ways.

Fulham replicated the 7-0 scoreline they achieved at Blackburn Rovers back in November. Rovers recovered and are now alongside Fulham and Bournemouth as genuine candidates to make the Premier League. You suspect Reading won’t enjoy a similar revival.

Fresh from the humiliation of being knocked out of the FA Cup by non-league Kidderminster, the Royals slid a little closer to the relegation places thanks to an undesirable combination of bad fortune, bad decision-making and shocking defending.

Having given Fulham a helping hand to establish their lead during the first-half, Reading were repeatedly torn apart after the break as the visitors really hit their stride.

You wonder how Reading manager Veljko Paunovic can stumble on much longer. It wasn’t his fault a six-point deduction for breaching financial regulations dumped his team to the fringes of the bottom three but things have certainly unravelled quickly from there.

But for Fulham, it was ole football from about the 70th minute with the travelling fans demanding further goals and the players obliging.

Just eight minutes in, Reading were dealt a major blow when experienced defender Scott Dann hobbled off with what looked like a muscle injury.

That forced Paunovic into a reshuffle with midfielder Josh Laurent pressed into service as a makeshift defender and Mamadi Camara replacing him further up.

A few minutes later, Laurent drifted out to a right-back position to help Camara out of a spot of pressure near the touchline. 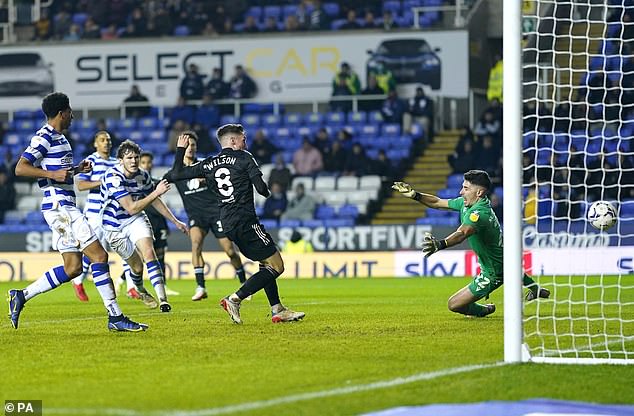 Demonstrating conclusively that he isn’t a defender, Laurent decided not to glance up before playing a square pass intended for his goalkeeper Luke Southwood.

Had he bothered looking up, he’d have spotted Wilson lurking with intent on the edge of the Fulham box. The assist gift-wrapped for him, Wilson simply needed to tap home for his eighth of the season.

Fulham were far from top gear but they briefly threatened to cut loose. Kebano managed to squeeze a pass through to Wilson but the Welshman slid his shot off target this time.

There was, however, more fight about Reading than they showed at Aggborough over the weekend and it took a brilliant save from Fulham’s Marek Rodak to deny them a leveller on 26 minutes.

Antonee Robinson inexplicably failed to clear a cross from the left, presenting the ball to Camara who back-heeled from six yards out. Rodak needed outstanding reactions to push it away.

Andy Carroll arrived in November and has wasted little time in endearing himself to the locals. His sheer physical presence in the air and knock-downs proved to be Reading’s primary threat.

He scored two spectacular goals in the space of four minutes but both were from an offside position which was a shame as both proved the 33-year-old still very much as it. 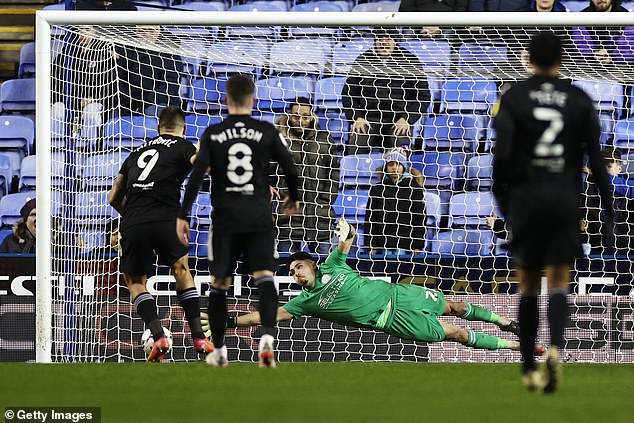 The first was an overhead kick from inside the box, the second a stunning volley from outside it. Carroll looked miffed his personal goal of the month competition had counted for nothing.

But you always sensed Fulham had another goal in them. Mitrovic was played through by Tom Cairney and tried to dink Southwood only for the keeper to extend an arm and deny him.

In stoppage time, however, just as Reading looked set to reach the break in the contest, Tom Holmes lunged in on Wilson when he was heading nowhere but out of play.

It was a stupid challenge and Mitrovic punished Reading by converting the spot-kick, taking his tally for the season to 23.

Fulham went in for the kill early in the second-half with Wilson half-volleying into the side-netting from Mitrovic’s knock-down.

The third goal duly arrived on the hour, the product of a divine passing move. Robinson carried the ball left, found Mitrovic and continued his run into the box.

The Serbian returned the ball to Robinson in plenty of space and he laid the ball on a plate for Wilson to touch home left-footed from just a few yards out.

An already terrible situation for Reading proceeded to become gradually worse with three more goals coming in the space of seven minutes.

First Kenny Tete nodded home his first goal for the club from close range after Mitrovic had thundered a corner towards the target.

The fifth came courtesy of Kebano, sliding in at the far post to turn home yet another inviting cross from Wilson.

And it was six of the best when defender Adarabioyo outjumped everyone in blue and white to thunder in Wilson’s corner kick delivery.

Mitrovic grabbed his second and Fulham’s seventh, scoring on the rebound after Rodrigo Muniz saw his shot pushed out by Southwood. The full-time whistle was an truly an act of mercy.