A man claiming to be the brother of Reading terror attack suspect Khari Saadallah has claimed his brother ‘defended himself,’ adding that the UK was ‘racist’.

In a series of Facebook posts since Saturday night’s vicious attack, which left three people dead and three more injured, Mo Saadallah has responded to news and written ‘f*** England’.

His younger sister has also passionately defended Saadallah after his arrest.

History teacher James Furlong, David Wails, and American born Joe Ritchie-Bennett have been named as the three victims who were killed during the rampage in Forbury Gardens on Saturday night. 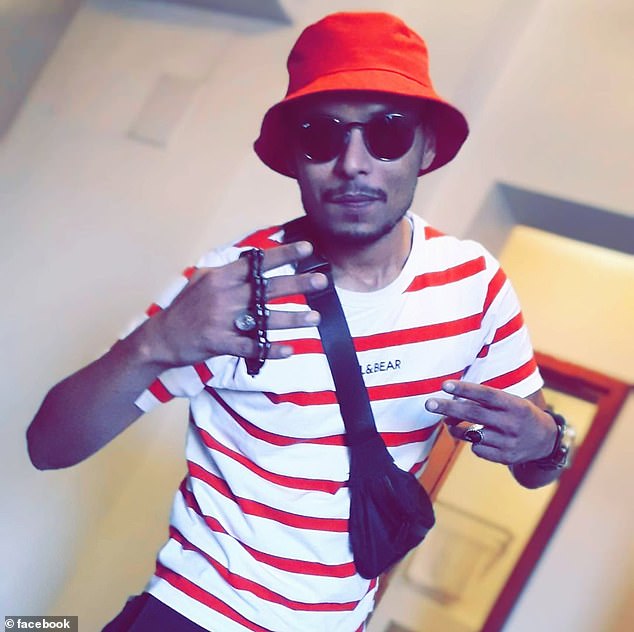 Responding to a Sky News post revealing the attack was being treated as terror related, Mo Saadallah wrote: ‘This is not true. Khairi defended himself … racist countries. Freedom for my brother Before !!’

On Sunday he posted: ‘We are not terrois (sic) and f*** England. #The_kingdom_of_racism’.

The suspect’s youngest sister has also defended him on social media.

She wrote: ‘First, my condolences to the families, I’m really sorry for them. This is the third day and we can’t keep silent to the people ‘who don’t know Khairi Saadallah.

‘He moved to the UK 10 years ago as a 16-year-old teenager and he started to study and release his wings with volunteer work because he has a history of volunteering in Libya during the revolution.

‘He really has a history of mental illness from the revolution, the death of relatives and the difficult situation in the country.

‘And about the beard, we all know about coronavirus and he can’t shave by himself.

‘We’ve all seen the video of his arrest. He did not defend himself or fight back as the officers arrested him and he was guided to the van by the authorities.

‘The second question, do we see blood on his clothes? Did he had a weapon? Do they have a video of Khairi stabbing people?’

Saadallah, who is thought to have only been released from prison for various offences 16 days ago, came to the attention of MI5 last year, after they suspected he was planning to travel to Syria for ‘extremist reasons’.

The 25-year-old allegedly claimed to have fought both for and against ISIS, though officials assessing him found he didn’t subscribe to any ideology or belief system and instead had mental health issues. 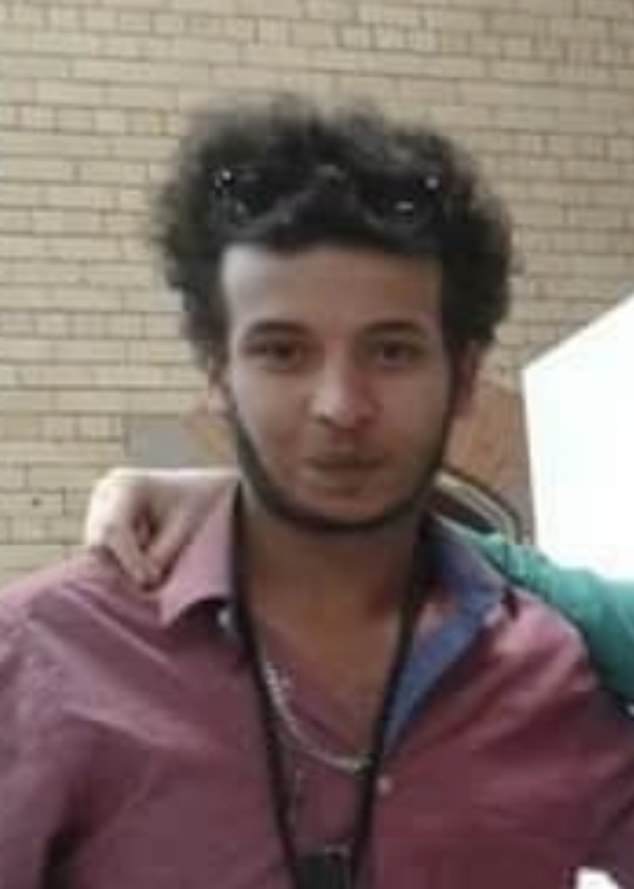 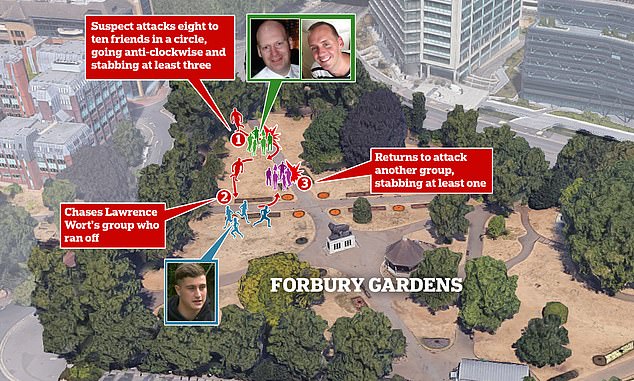 An investigation revealed no immediate risk or threat and he was not under surveillance at the time of his alleged rampage.

Saadallah was diagnosed with post-traumatic stress disorder and delusional and paranoid schizophrenia, requiring medication before his release, a source told the Sun.

He is thought to have come to the UK from Libya as a tourist in 2012 before claiming asylum as he was at risk from Islamic extremists in his homeland because he ‘liked to drink’ and didn’t lead a ‘strict religious life’.

However, once in the UK, he ended up in prison after committing several non-terror offences. He is even thought to have converted to Christianity and has a tattoo of a cross on his arm.

Saadallah boasted to friends in the UK that he had fought as a child soldier against the forces of former Libya leader Colonel Gaddafi – which he said had forced him to flee the country.

However, his cousin disputed these claims and said Saadallah had fled to avoid conflict.

She added that he heard voices and had psychotic episodes which left him thinking he was being followed. 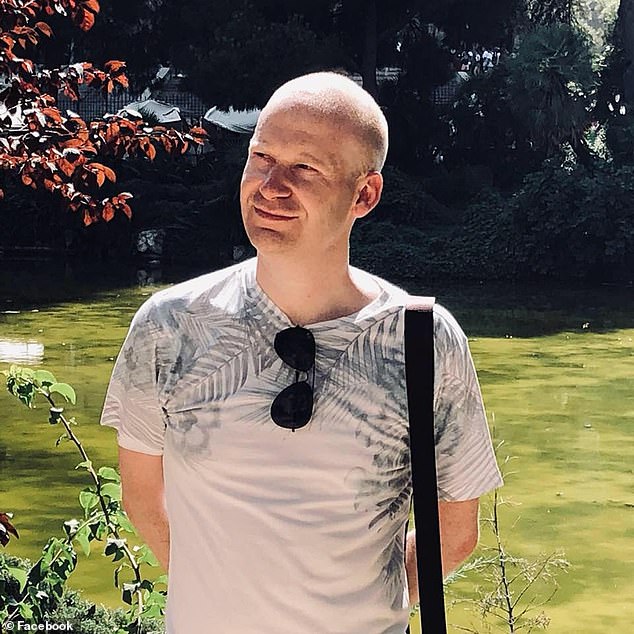 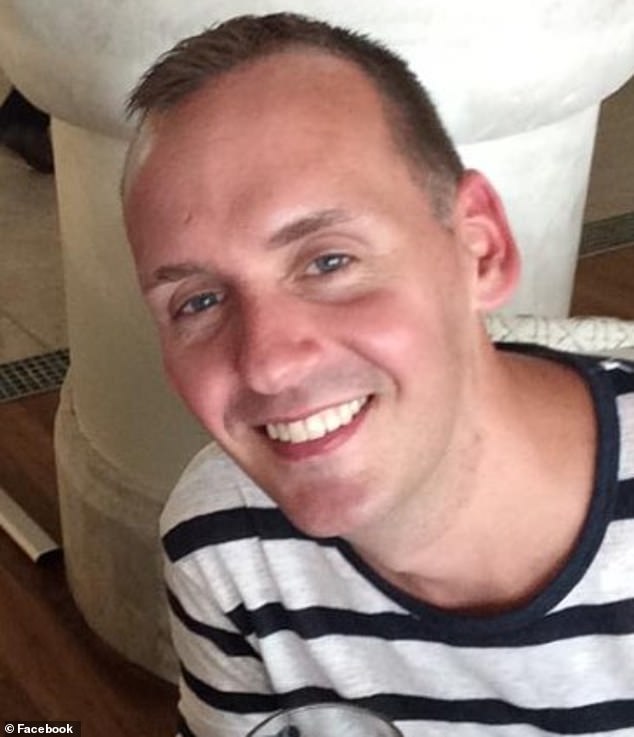 The cousin, speaking to the Daily Telegraph, added that, three years ago, Saadallah started dating a British woman who was ‘very religious’ and he started going to church, eventually converting to Christianity.

Though the couple have since split, Saadallah maintained his faith, even have a tattoo of a cross etched onto his arm.

His cousin added: ‘ He’s not Muslim any more. It’s like he’s always been in the UK.’

His cousin in Libya said: ‘I can’t believe he’d do anything like this or be involved in anything to do with terrorism. He was at risk of extremists in Libya because he liked to drink and socialise and didn’t lead a strict religious life at all.

‘He started going to church and had tattoos all over his body including one of a cross on his arm. He did get in trouble in England and could be aggressive but I can’t ever imagine him getting drawn into something as serious as this.’

Among his other offences, in March 2019 Saadallah spat at Judge Sophie Toms at Reading magistrates court as she sentenced him for previous offences.

Saadallah was given tough licence conditions after his release from prison, but lockdown-hit probation and social services struggled to monitor him.