Real Housewives Of Dallas: Brandi Redmond breaks down at her own Brandiland fashion pop-up party

Brandi Redmond cried at her own fashion line pop-up shop party on Wednesday’s episode of The Real Housewives Of Dallas.

Cary during the Brandiland clothing event was confronted by Kameron who accused her of failing to protect her from Brandi during their Beaver Creek, Colorado trip.

Pop-up shop: Brandi Redmond cried at her own fashion line party on Wednesday’s episode of The Real Housewives Of Dallas

Their spat nearly got out of control as they both pointed fingers at each other.

Cary later brought up that she prevented Brandi during the trip from gifting her with Stressticles, which are stress-relief balls shaped as testicles.

‘I don’t think so. Wrong,’ Cary was shown saying in a flashback as she took full credit for it.

Kameron then gave her a hug for sticking up for her. 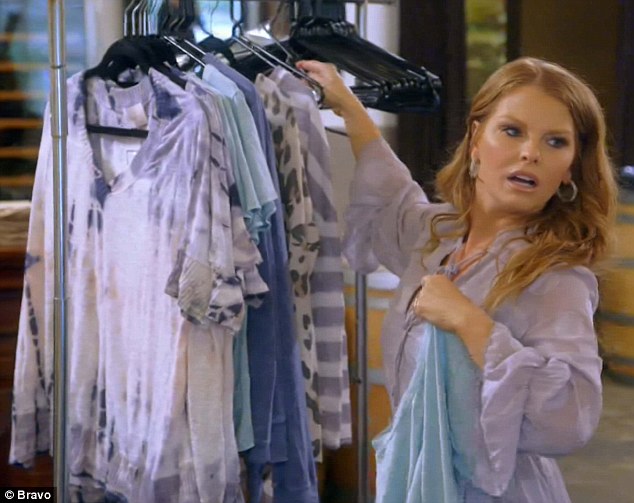 Fashion line: The former Dallas Cowboys cheerleader wore a dress from her line that she designs herself 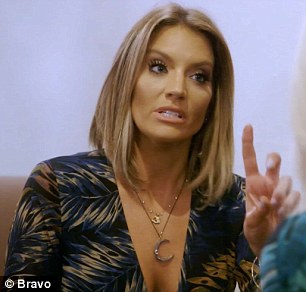 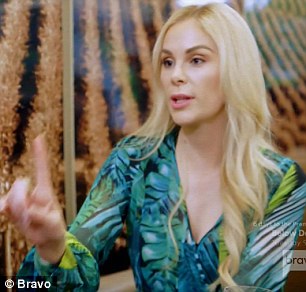 Pointing fingers: Cary Deuber and Kameron Westcott pointed fingers at each other while arguing

She told the mother-of-three that she was proud of her and then noticed that Brandi appeared sad.

‘I’m good,’ Brandi lied before downgrading her mood to ‘good’. 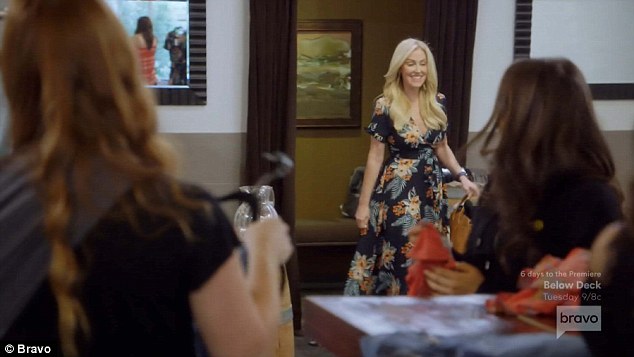 Floral print: Stephanie Hollman changed into a floral print dress from Brandi’s line at the event

She then admitted that Cary told Kameron that she stepped in and stopped the gift.

She then broke down crying as Stephanie rushed to console her. 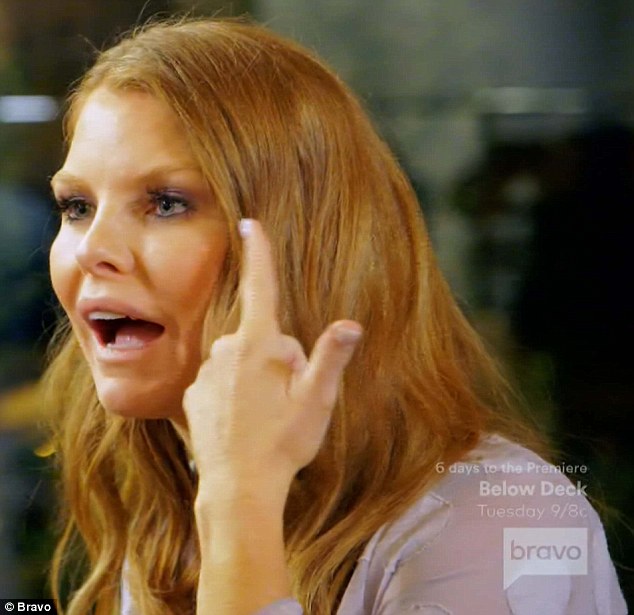 Not true: Brandi told Stephanie that Cary made her look bad to Kameron

‘You’re going to crash and burn, Brandi. You’re not sleeping,’ Stephanie warned her.

Stephanie said she remembers the hard ‘baby stage’ and feeling ‘so tired and exhausted’.

‘It’s OK to ask for help, too,’ Stephani told her. 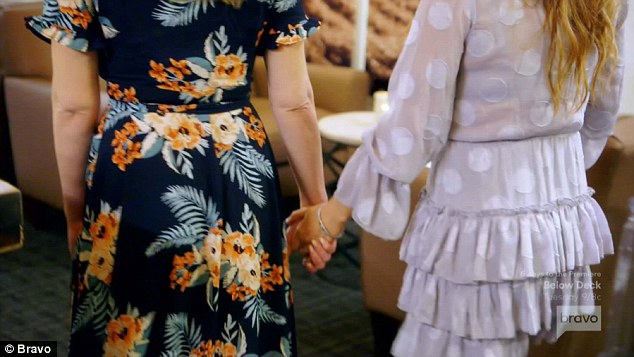 Holding hands: Stephanie consoled Brandi after she broke down and held hands with her

Brandi during a confessional said that she’s been focused on newly adopted baby boy Bruin and felt like she was neglecting her two daughters and husband.

‘Sorry,’ Brandi said as she burst into tears again.

The episode opened with Stephanie and her assistant Trey preparing her spa day at her luxurious home. 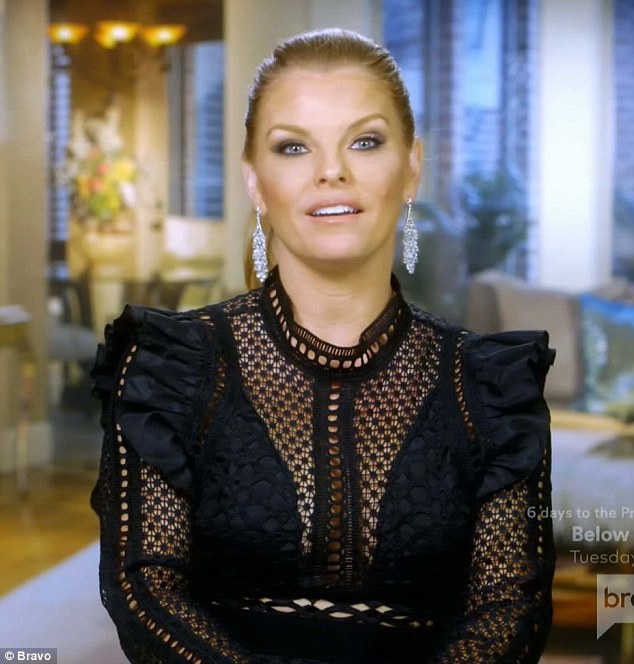 Getting emotional: Brandi grew emotional as she talked about focusing on her adopted baby boy Bruin lately

Stephanie invited Brandi over as she auditioned models for the upcoming spay day.

They encouraged the men to take off their shirts and they gladly obliged.

Brandi and Stephanie squealed with delight as another model auditioned along with his baby kangaroo. 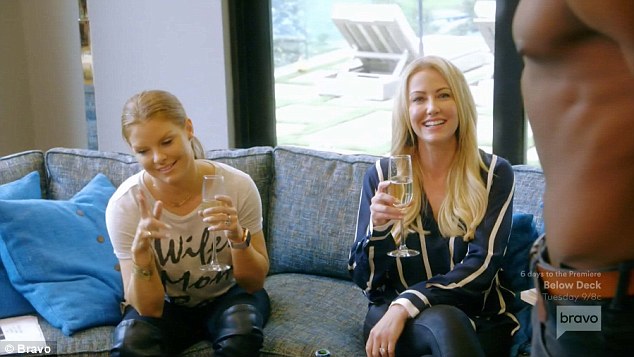 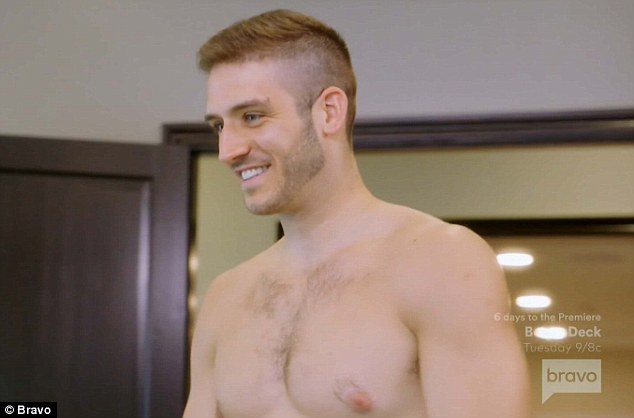 Shirt off: The models gladly took their shirts off for Stephanie and Brandi 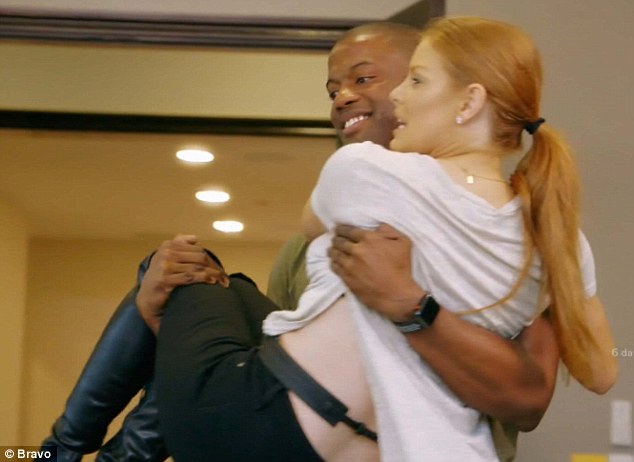 Holding on: Brandi was lifted up by one of the models

Stephanie decided to hire them all.

‘I’ve never had that much fun,’ Brandi said.

LeeAnne Locken meanwhile starred in a photoshoot for new dress that could be worn 175 different ways. 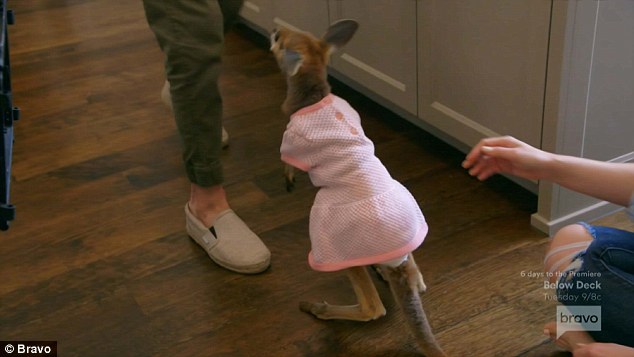 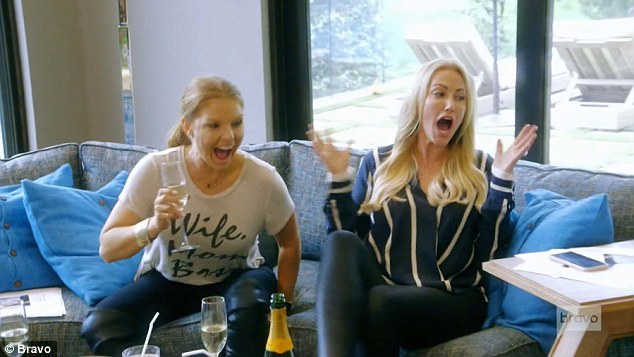 Loving it: Brandi and Stephanie loved the baby kangaroo

Multiple looks: LeeAnne Locken took part in a photoshoot  for her dress that can be worn 175 different ways

Kameron showed support at the photoshoot and complaine that Cary was playing both sides.

Brandi was then shown with her sister-in-law Megan as they prepared for Brandiland.

‘We’re doing it,’ Brandi said enthusiastically as they rushed to get ready. 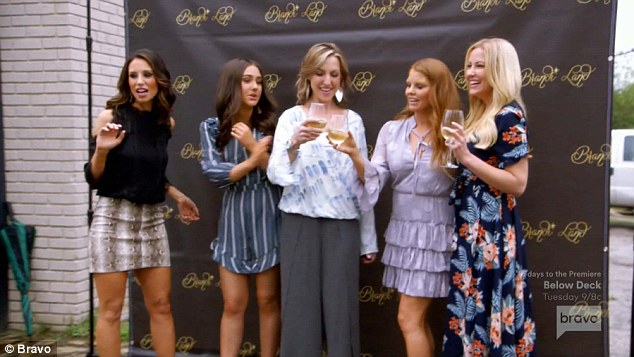 Pop-up shop: Stephanie celebrated with Brandi at her pop-up shop

Brandi said that she designs her own pieces.

‘I wear it and love. I hope other people like it, too,’ she said.

She dressed Stephanie when she got there and found a lovely green dress for tall Kameron. 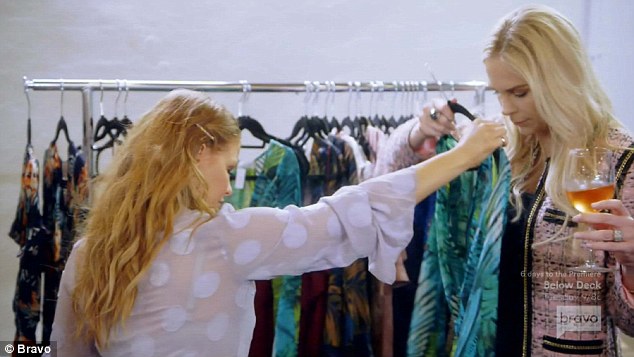 Green dress: Brandi picked out a green dress for Kameron

Kameron admired Brandi for being a working mother.

‘I’m hoping to do this with Sparkle Dog one day,’ Kameron said of her premium dog food line.

LeeAnne refused to change and said she has a different design aesthetic. 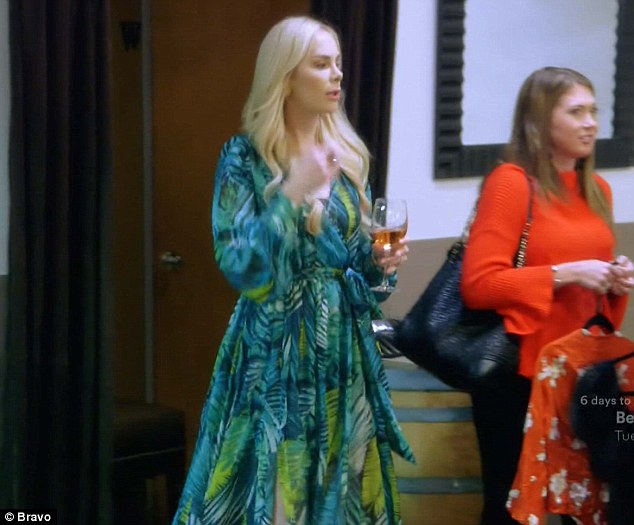 ‘It’s cute,’ said LeeAnne who added that she wasn’t going to share her ‘real opinion’.

D’Andra Simmons at the fashion show scolded LeeAnne for insinuating that she was broke and only had $200 to her name.

LeeAnne said that she cried about it. 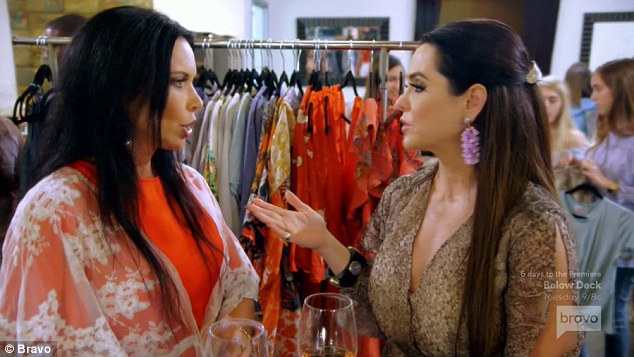 Broke rumor: D’Andra Simmons scolded LeeAnne for spreading a rumor that she was broke

‘Hurting you made my heart break. I will never do it again. I am so sorry. I would rather hurt myself than hurt you,’ LeeAnne told her as tears flowed.

D’Andra in a confessional seemed unimpressed.

‘LeeAnne has a wonderful ability to create crocodile tears,’ she said. 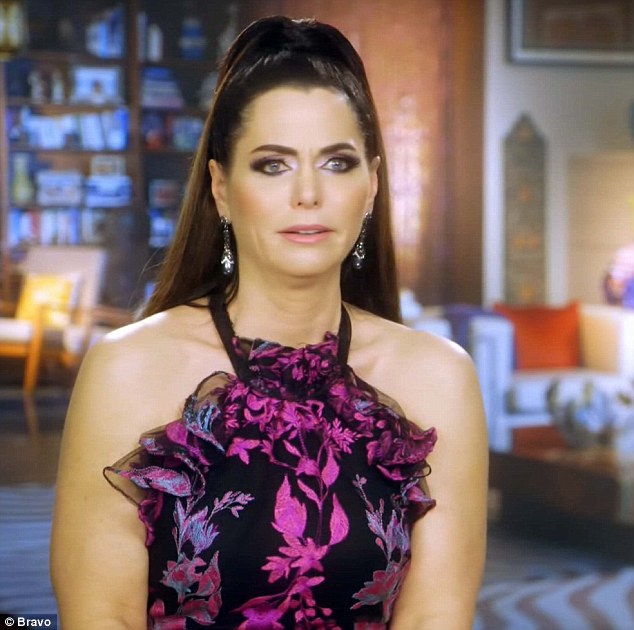 Stephanie at her spa day welcomed the women with tea sandwiches, white whine and monogrammed robes.

Men in white togas formed the welcoming outside and crowns were placed on their heads inside.

Stephanie provided massages and nail pampering and the baby kangaroo. 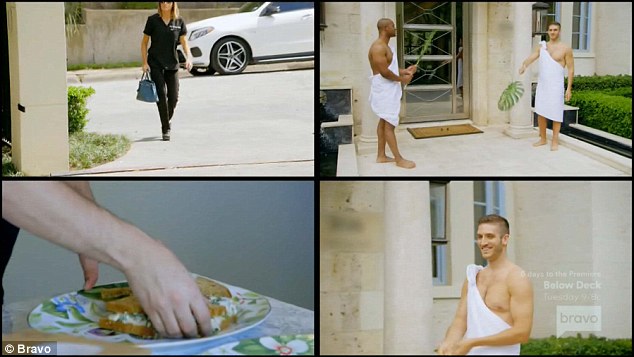 Warm welcome: The male models wore togas as they welcomed the women to spa day 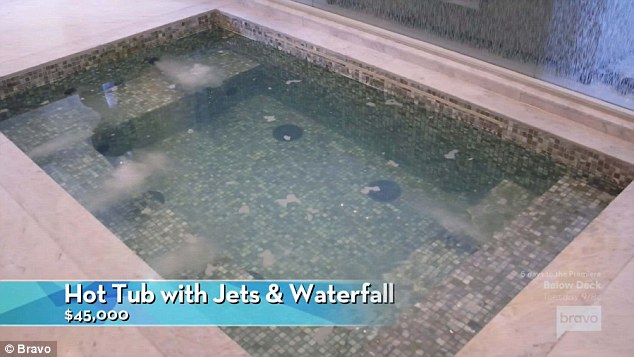 LeeAnne was unimpressed and asked its owner Chase if Callie-Roo had papers.

Brandi during a nail session talked to Cary about the ‘Stressticles thing’. 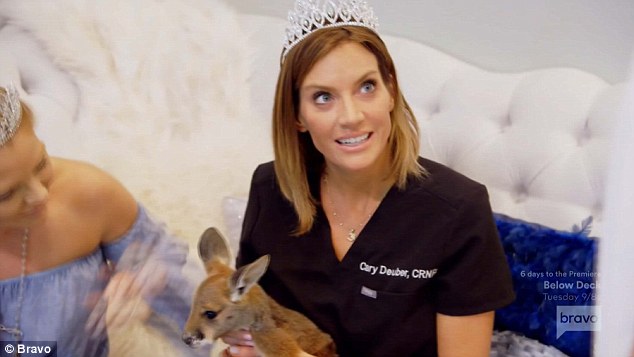 Big hit: The kangaroo was a big hit at the party 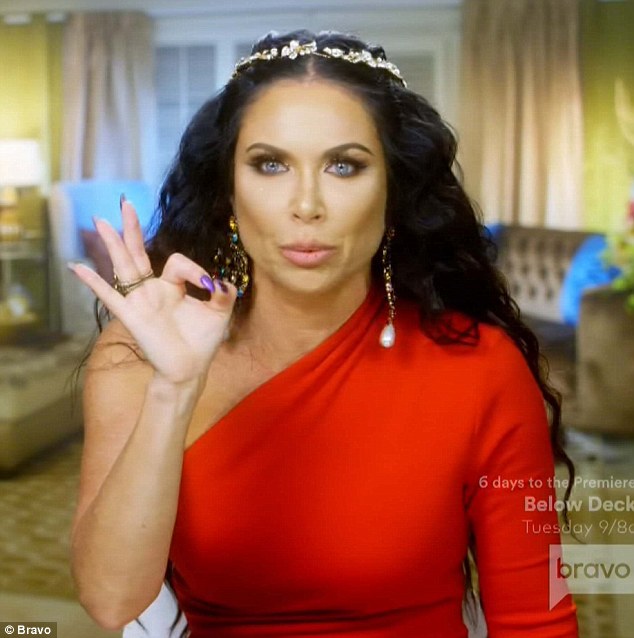 Lone dissenter: LeeAnne believed the kangaroo was there illegally

‘You made me look bad to Kameron and maker yourself look good,’ Brandi said.

Cary admitted that she was defending herself and said she was sorry it was at Brandi’s expense. 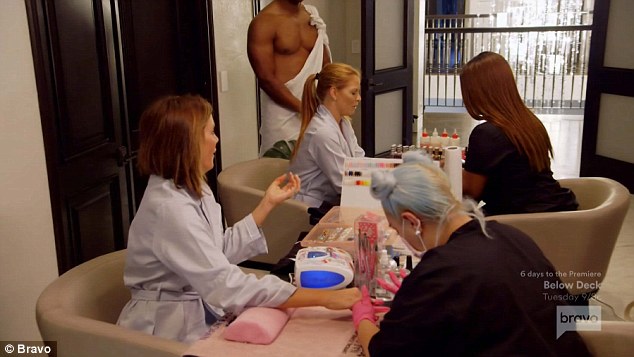 Nail session: Cary and Brandi talked it out during their nail session

She later badmouthed Kameron and accused her of being under the influence of LeeAnne.

‘Kameron doesn’t have a voice of her own, let’s be honest,’ Brandi said.

Cary was reluctant to hear it. 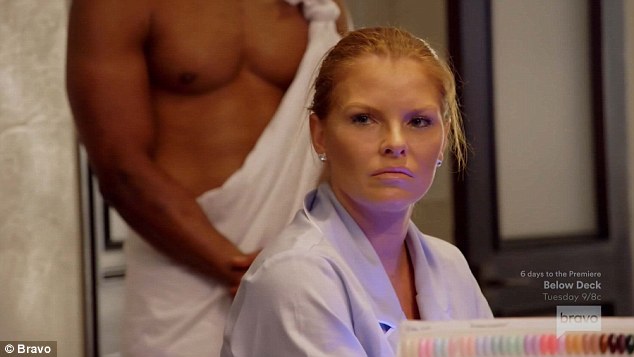 ‘Don’t do it, girl. Don’t tell me secret s***,’ Cary said in a confessional after ealier warning the women that she wasn’t keeping anyone’s secrets.

Kameron was shown telling husband Court about the Global Pet Expo and the busy traffic at ther Sparkle Dogs booth. 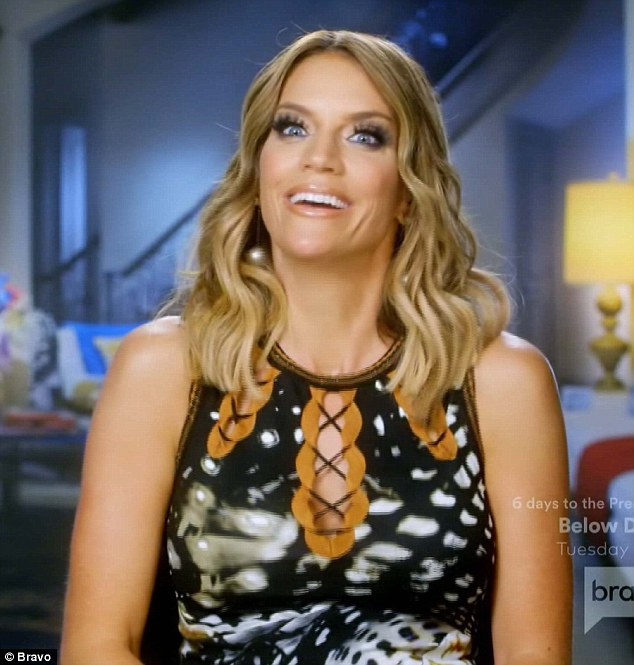 No secrets: Cary earlier warned everyone that she was not going to keep anyone’s secrets

Court reminded her that the goal was to find a distributor and someone to help license the product.

Kameron said she had some leads and was determined to prove she could do it.

‘The overall dream is mom, the second is entrepreneur,’ Kameron said.

RHOD will return next week on Bravo. 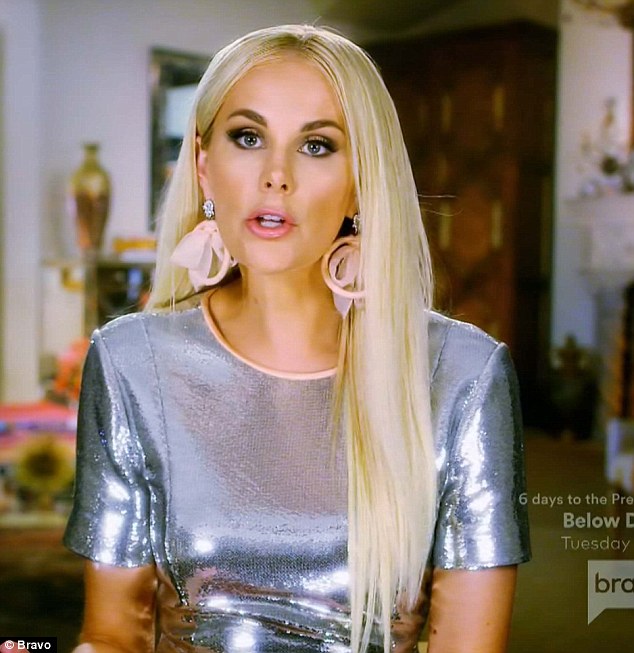