A real-life Rapnuzel spends sixteen hours a week managing her 51-inch-long tresses – and her hair is so thick that bugs are constantly getting trapped in it.

Alena Mazanik, 35, from Leninsk-Kuznetsky, has always had long hair, but since 2011  she’s been religiously growing it out to create a Rapunzel-style look.

She spends up to four hours a time, three to four times a week completing a strict haircare routine to make sure her locks stay healthy.

However, despite being proud of her mane the real-life Rapunzel admitted that bugs sometimes get caught in her tresses, and that her locks cling to door handles. 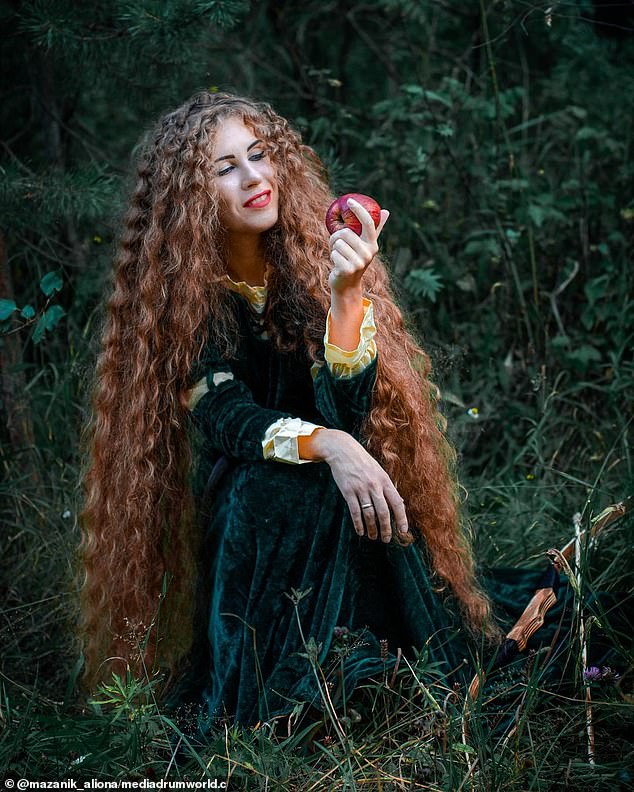 The real life Rapunzel, pictured, admitted bugs sometimes get caught in her mane and it clings to door handles

While she has been criticised online for her ‘horse tail’ hair, she said she doesn’t let the negativity bother her.

In 1999, at the age of 13, she cut her 12-inch lengthy tresses off to fit in with the short bob hair styles of the time, but swiftly realised it was a mistake and became very upset while she waited for it to grow back.

After it had recovered from the cut, she continued to grow it out. When she hit 19 in 2006, her hair was 22-inches long and she decided she wanted to try her hand at colouring her hair. 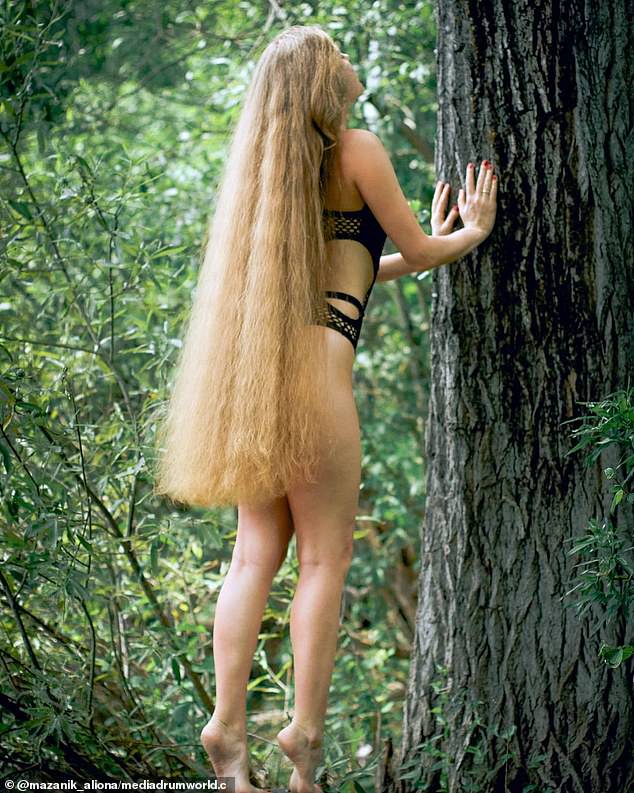 Alena, pictured, said she receives compliment from men and woman alike, telling her never to cut her long tresses

She continued dyeing her hair until she was 23 in 2010, when she experimented with hair dyes which severely damaged the condition of her hair.

Realising the damage she’d caused to her hair in 2011, she began to grow her hair again and gradually trimmed off the damaged and coloured parts of the hair.

Over the next few years she continued to grow her luxurious locks and in 2018 she decided she wanted very long hair and began to take her hair care seriously.

‘In 2018, I realised I wanted very long hair and I had to take good care of it to keep it healthy,’ said Alena.

‘I love that my hair is fluffy and very soft. In the summer, I wear my hair loose and enjoy the feeling of it brushing against my shoulders, arms and thighs. 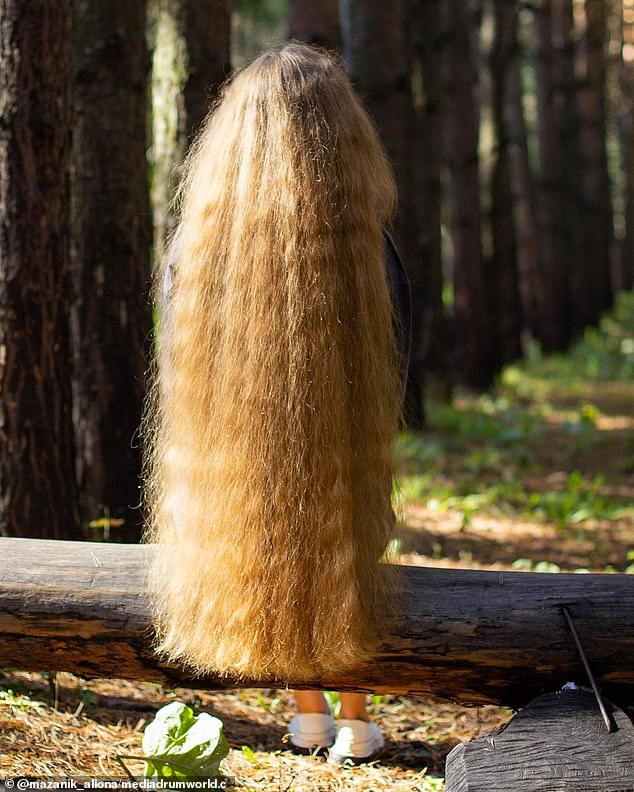 Alena, pictured, has been growing her hair since 2011, after damaging it with hair dye treatments until 2010 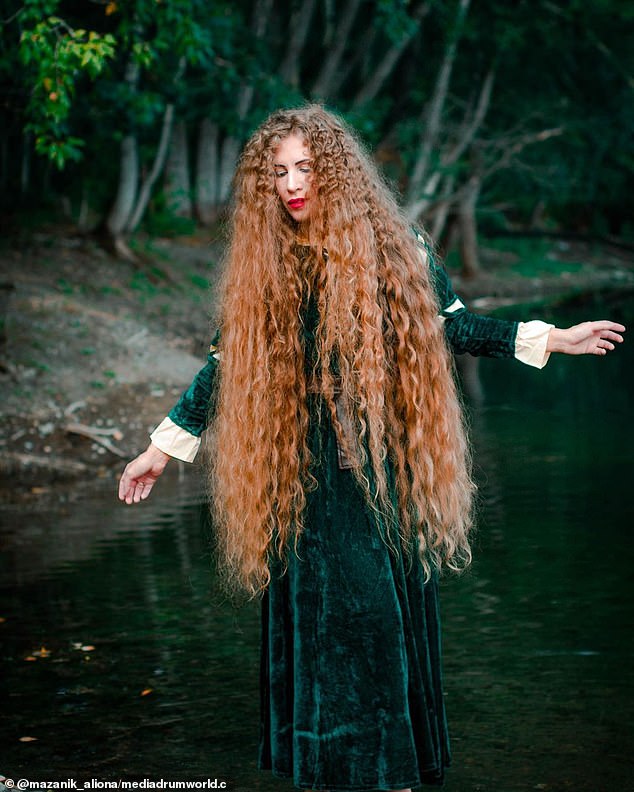 The real life Rapunzel likes to dress in vintage outfits to go with her coppery tresses, which is the same size as an average height 10-year-old boy

‘I enjoy combing my hair and stroking it with my hands.

Her hair care routine takes two to four hours a time, three to four times a week. She uses herbal oils and masks to massage her scalp to stimulate growth combined with shampoo with soft surfactants and moisturising hair masks.

Following a wash, she uses sprays, creams and oils which stick in her hair to keep it in good condition. Now her hair is 51-inches long and almost reaches her knees.

She documents her hair growth journey online on Instagram and TikTok, where she has nearly two million followers, under the handle @mazanik-aliona. 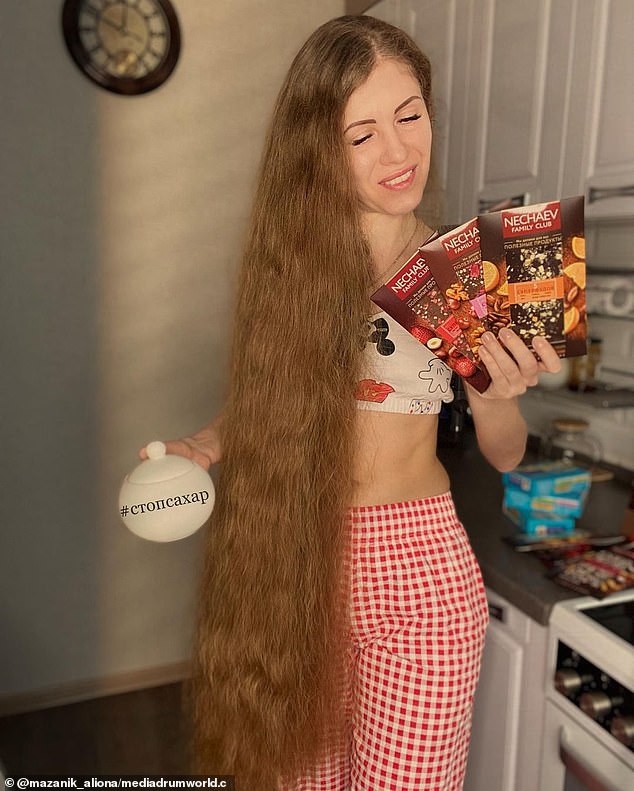 Alexa uses natural hair masks, pictured, to look after her tresses during a strict haircare routine 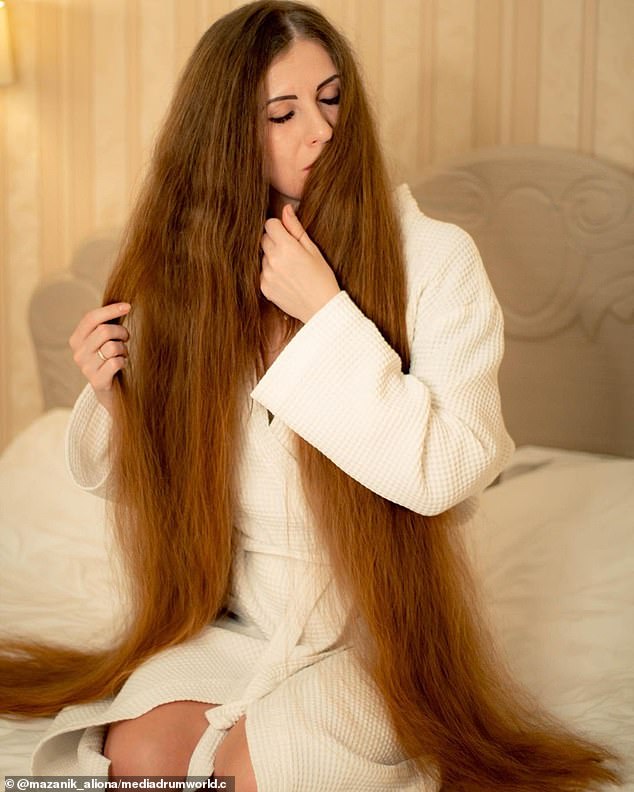 It takes her up to four hours, three to four times a week to brush, wash, dry and moisturise her locks, pictured

‘Sometimes the length of it causes problems, for example I accidentally sit on it or catch it in a car door and it clings to door handles. Flies, beetles and butterflies can even become tangled in it.’

Alena says she receives lots of compliments when she walks with her hair down and children often compare her to Rapunzel.

Men often tell her ‘never cut your beautiful hair’ and on the internet people leave her comments and messages telling her they love her hair – some women call her an inspiration and tell her she motivates them to grow their hair.

However, she also receives negative comments and gets told her hair looks like a horse’s tail. 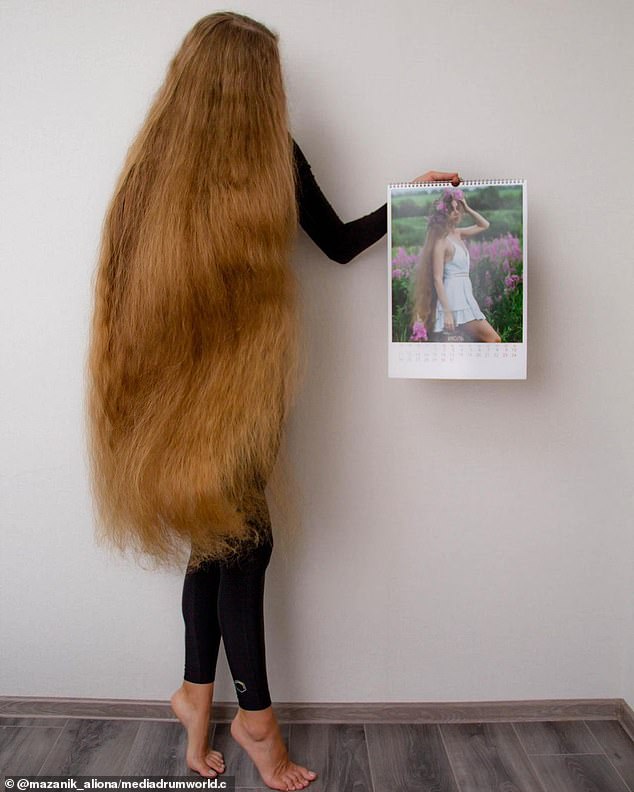 While she is proud of her locks, Alena said she has alos received criticism online, with some people making fun of her ‘horse tail’ hair 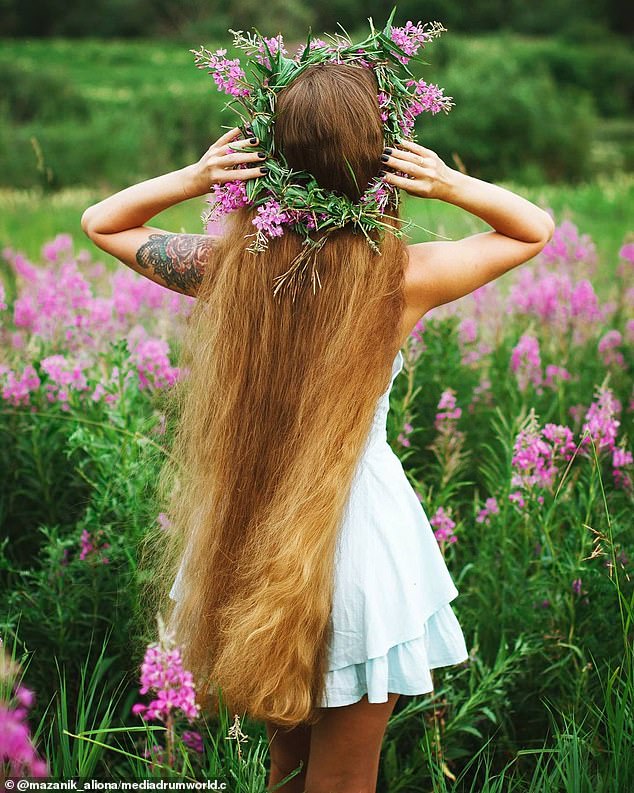 Alena doesn’t engage with critics online. She said no one should be judged for their appearance 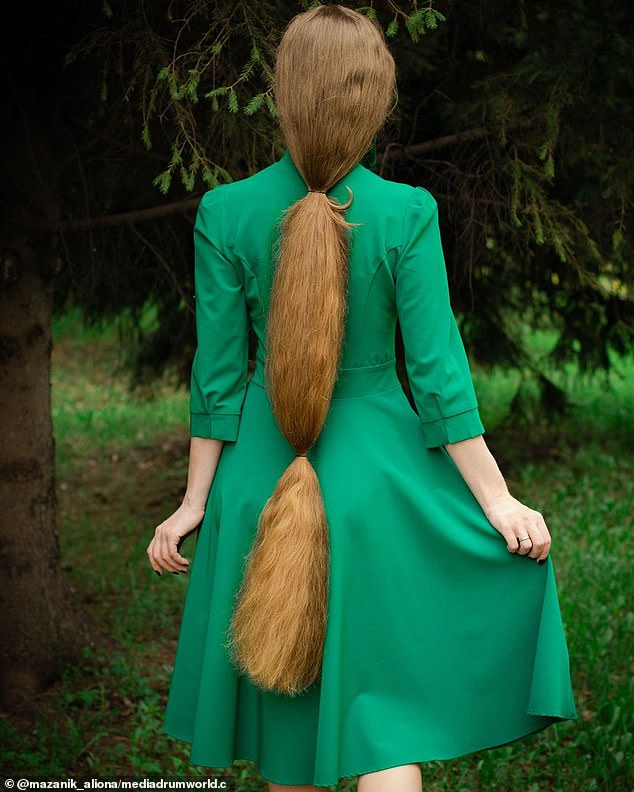 Alena, pictured with her hair tied, said she thinks all hair is beautiful and people should just do what they like with it 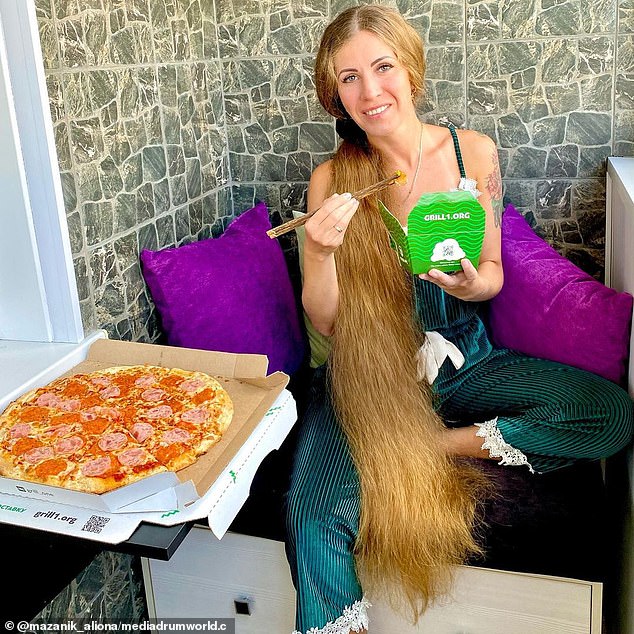 When she gets told this, she responds with ‘thank you, horses are beautiful animals with amazing thick hair’. Some people think that her hair is too unkempt, but Alena believes that all hair can be beautiful.

‘Everyday people from all over the world write to me on Instagram and TikTok and admire my hair,’ continued Alena.

‘Women tell me that I motivate and inspire them. They ask me for advice on how to grow their hair and I help them.

‘However, some people believe that only straight and smooth hair is beautiful and my hair is unkempt.

‘I explain to them that any hair can be beautiful – whether it’s straight, curly, fluffy, long or short, thick or sparse.

‘You can’t hate people for their appearance. Every person is beautiful in their own way and has the right to choose what kind of hair they want.’ 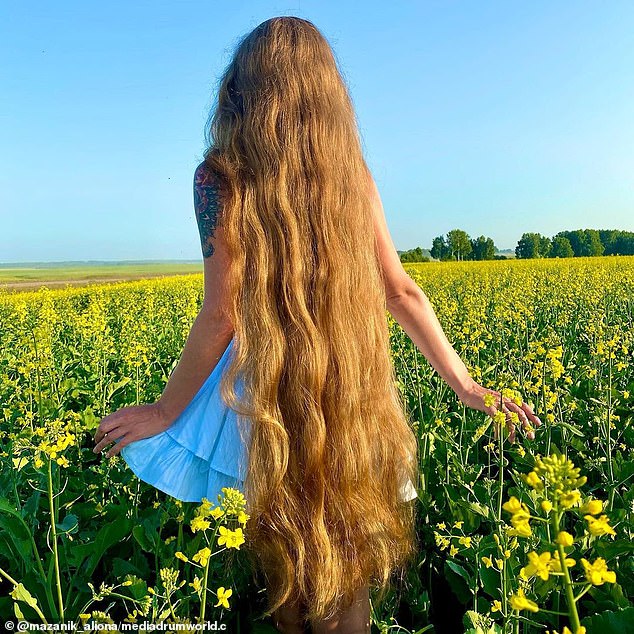 The influencer, pictured, who counts 2 million followers on TikTok, said women sometimes tell her she is their hair inspiration 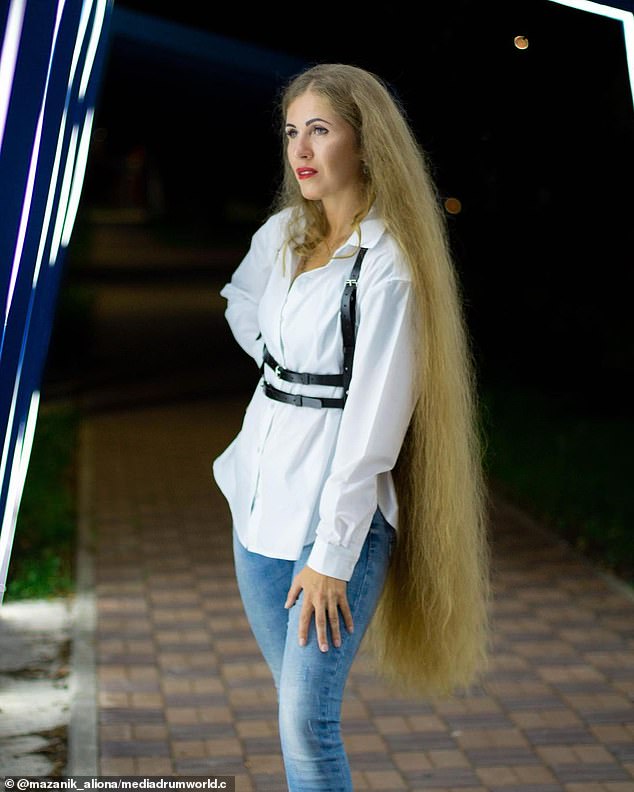 Women often ask Alena, pictured, for advice on how to grow their hair out or how to look after it 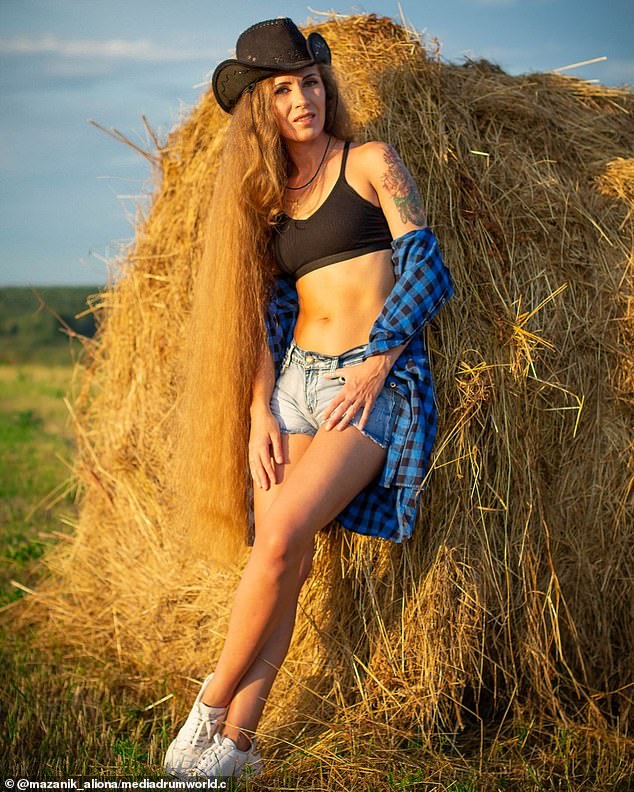 Alexa admitted some people have told her they think her hair is unkept, but she said she replies that all hair can be beautiful when that happens 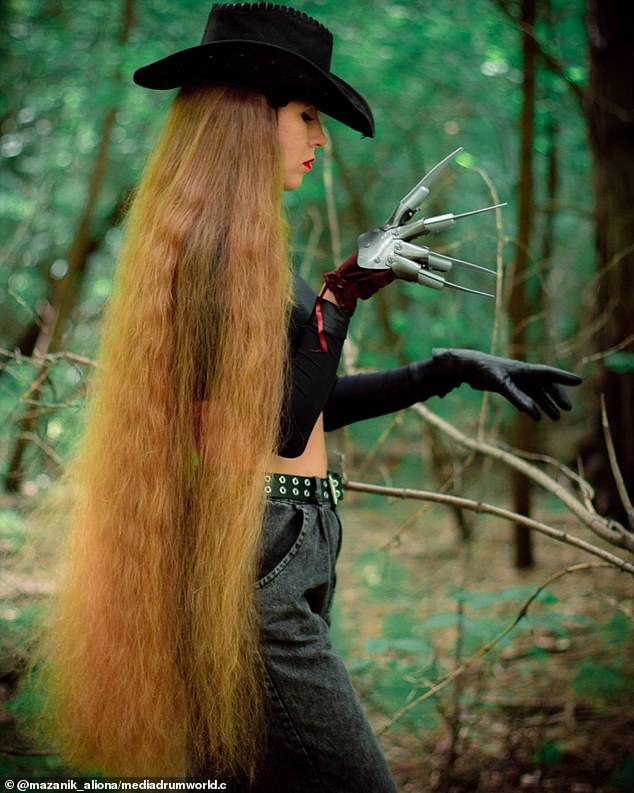 Alena dressed as the character Freddie Kruger, from the Nightmare on Elm Street horror classic 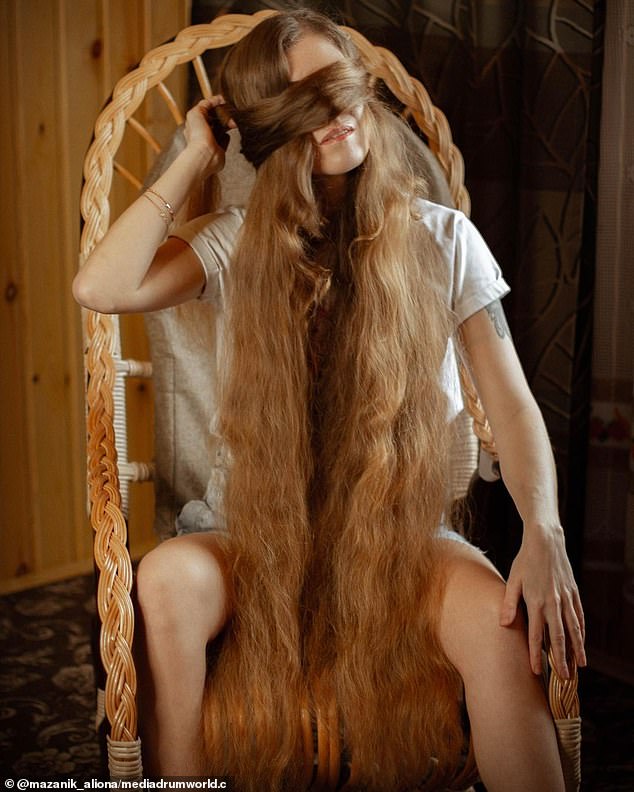 The influncer’s hair is so long she can tie it around her hair as a blindfold, pictured. When worn down, her mane reaches to her knees