Real Madrid coach Julen Lopetegui finally saw his team end their run of five games without a win with victory over Viktoria Plzen but this still felt more like a stay of execution than a pardon for the manager.

When his name was announced to supporters before the game there were neither cheers nor jeers from the Santiago Bernabeu – apathetic indifference will be Lopetegui’s legacy if he is fired before given the chance to revive his sluggish team.

Madrid scored twice with Karim Benzema and Marcelo both showing the quality that has won them four Champions League medals in the last five years. 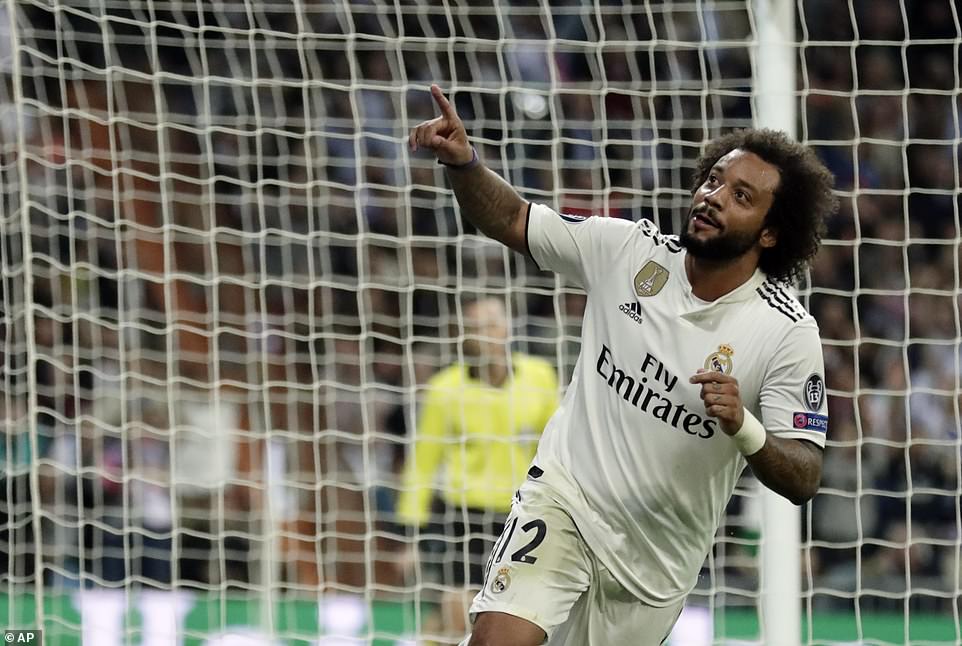 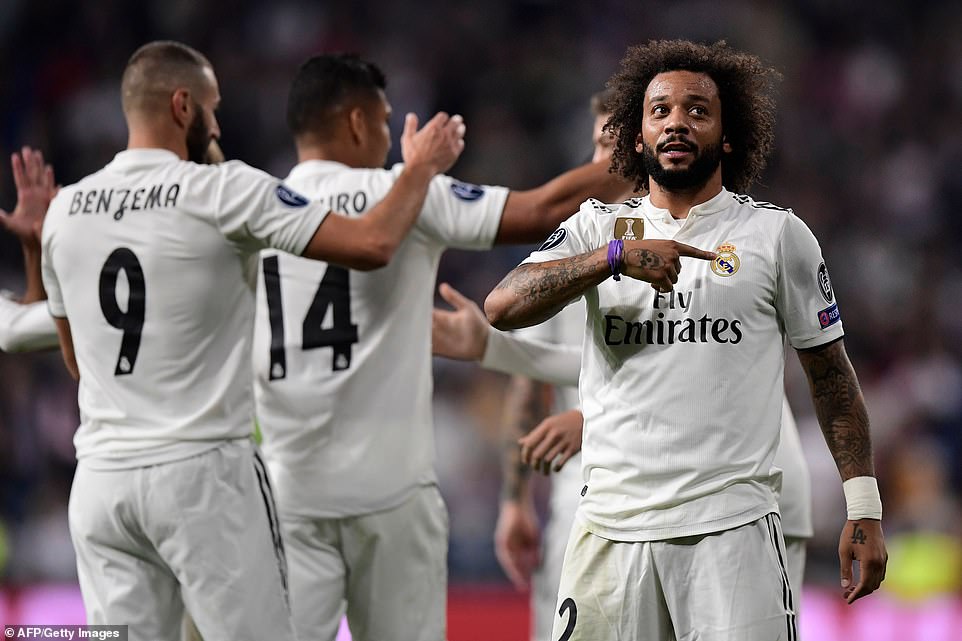 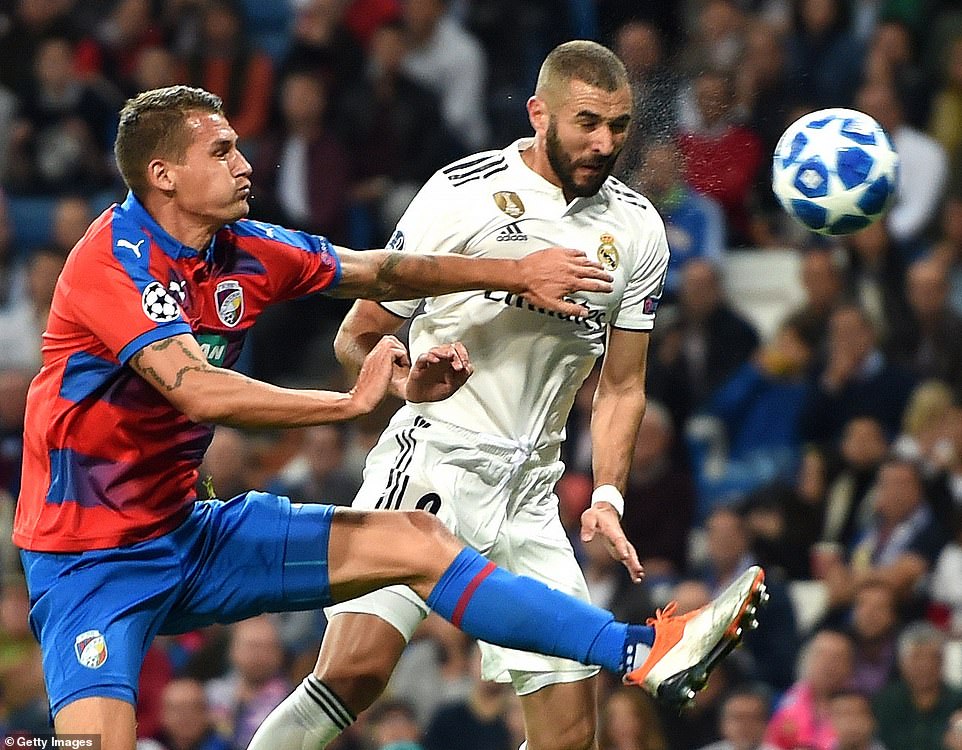 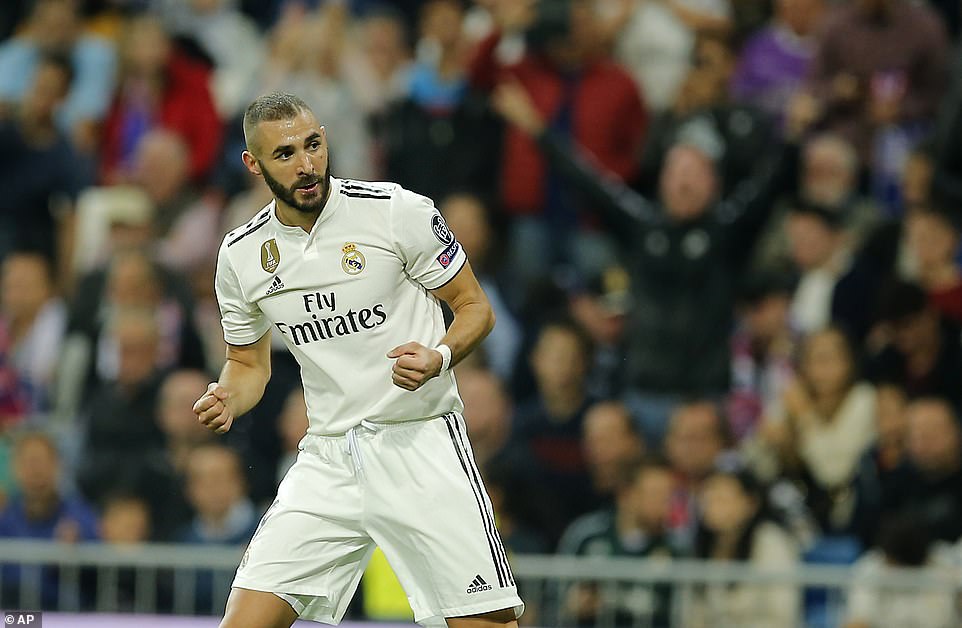 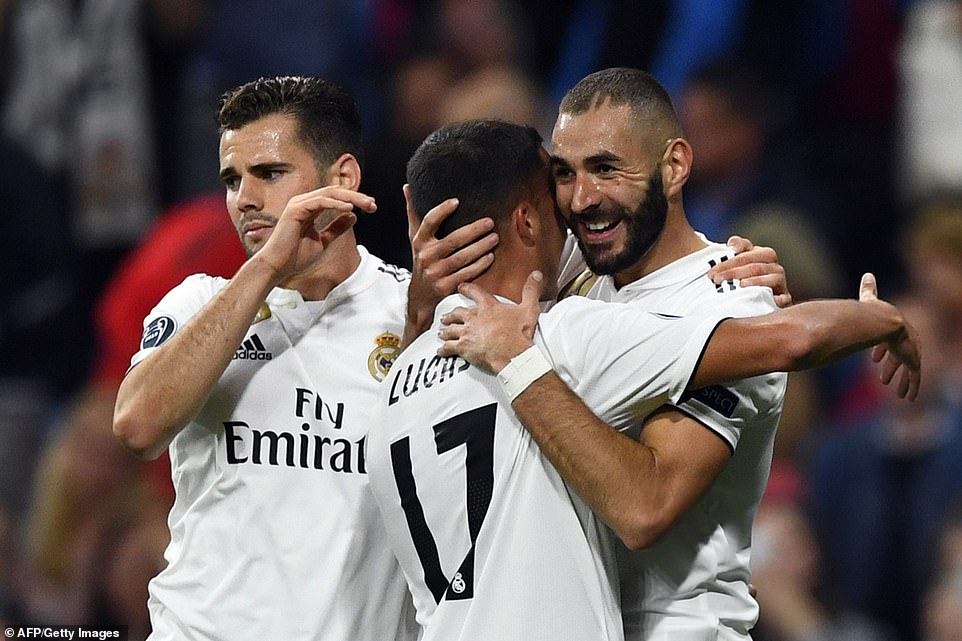 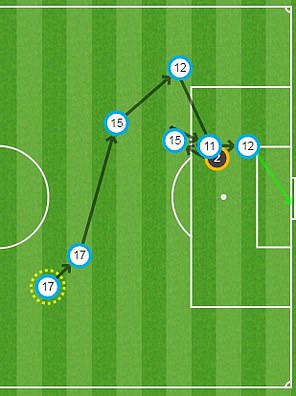 Marcelo doubles the lead for Real Madrid after half time. CLICK HERE for more from MATCH ZONE

Marcelo thumped the badge on his shirt after his goal but no player ran to the bench to show any solidarity with the manager who saw his team produce another display of sloppy defending and too-often wasteful finishing.

Sergio Ramos headed on to the post after four minutes. He then kicked it in frustration. It was the 11th time Real Madrid had hit the frame of the goal in 13 games so far this season.

Madrid had winger Lucas Vazquez at full-back and he showed his best and worst side inside a minute. First he let Milan Petrzela get away from him inside the area and only Keylor Navas getting down smartly prevented Madrid from going behind.

But with Madrid’s next attack Vazquez ran down the wing and floated a cross to Benzema who rose above Lukas Hejda to head past Ales Hruska, making it 1-0 on 11 minutes.

On the half hour there was another error from Vazquez and almost immediately another chance for Benzema.

Plzen again played in behind Vazquez and when the full-back David Limberski over-lapped Gareth Bale failed to track him and only his poor finish across the face of the goal prevented the leveler.

Madrid responded and Benzema should have squared to Bale who was all alone in the six-yard box. The Frenchman apologized signaling that he had not seen his team-mate. Isco was then guilty of not seeing the better-positioned Toni Kroos as he lobbed tamely wide. Madrid were snatching at chances in search of the second. 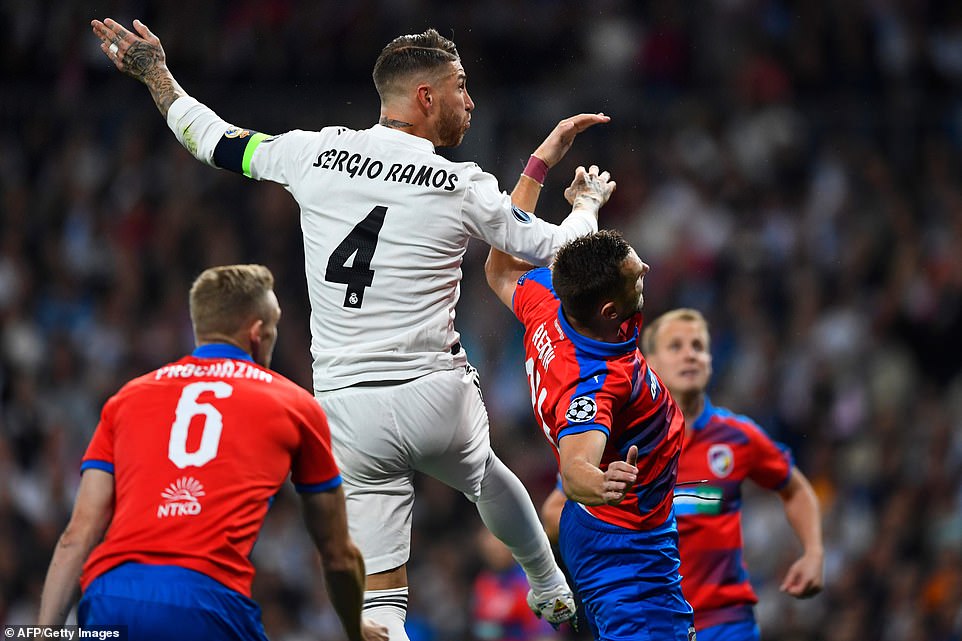 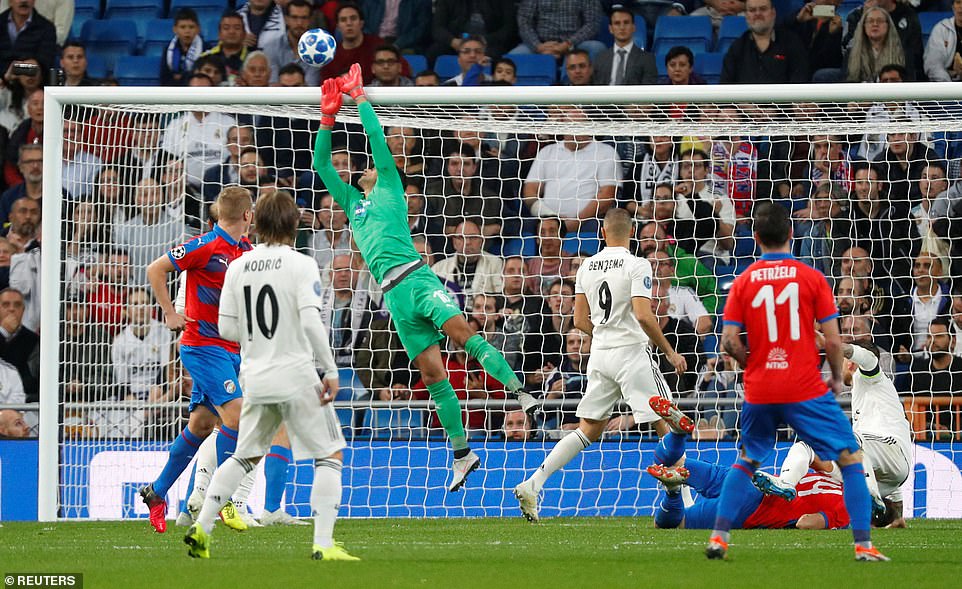 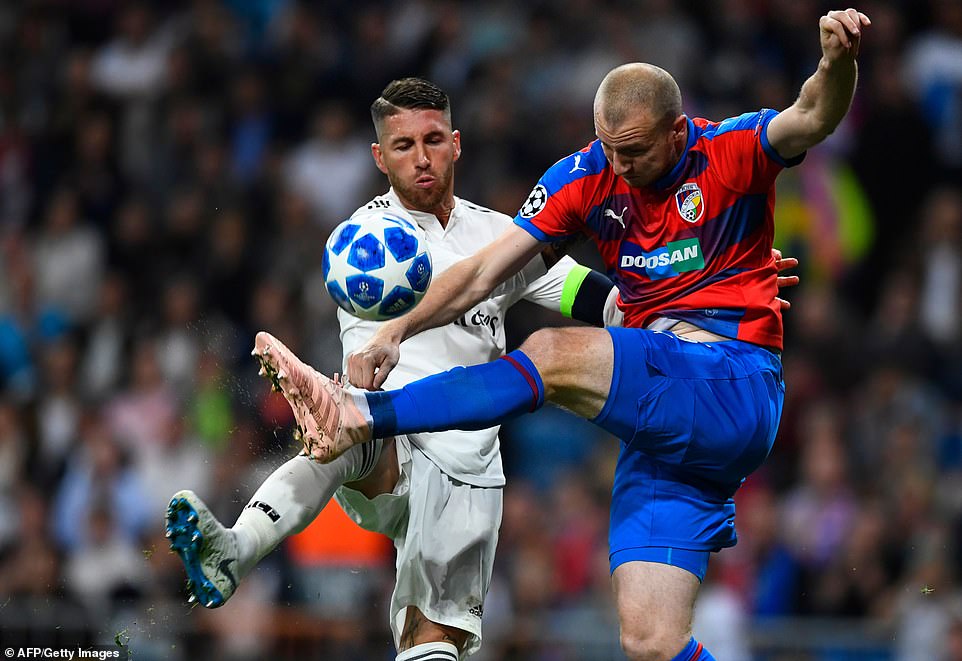 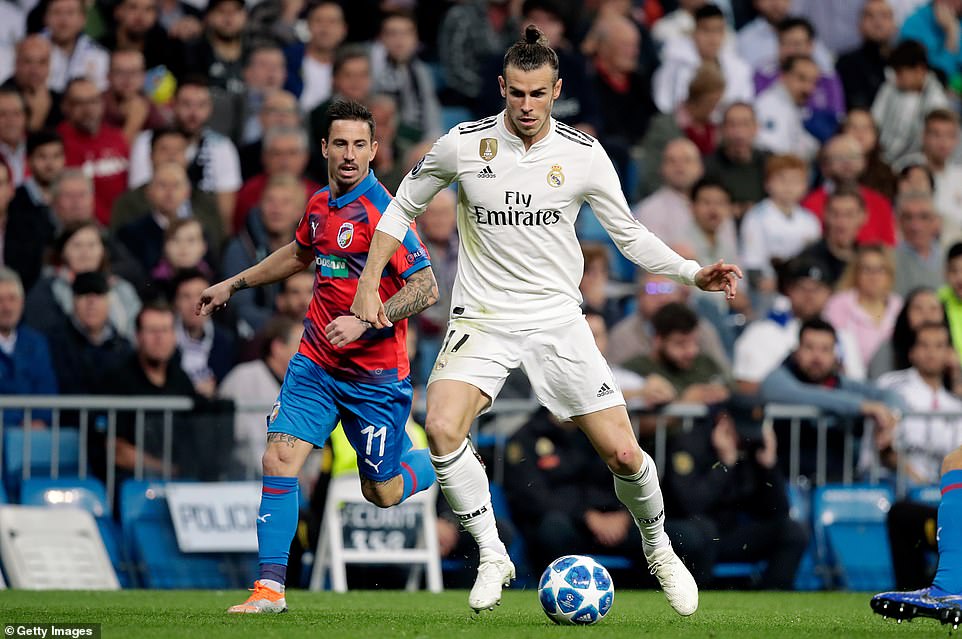 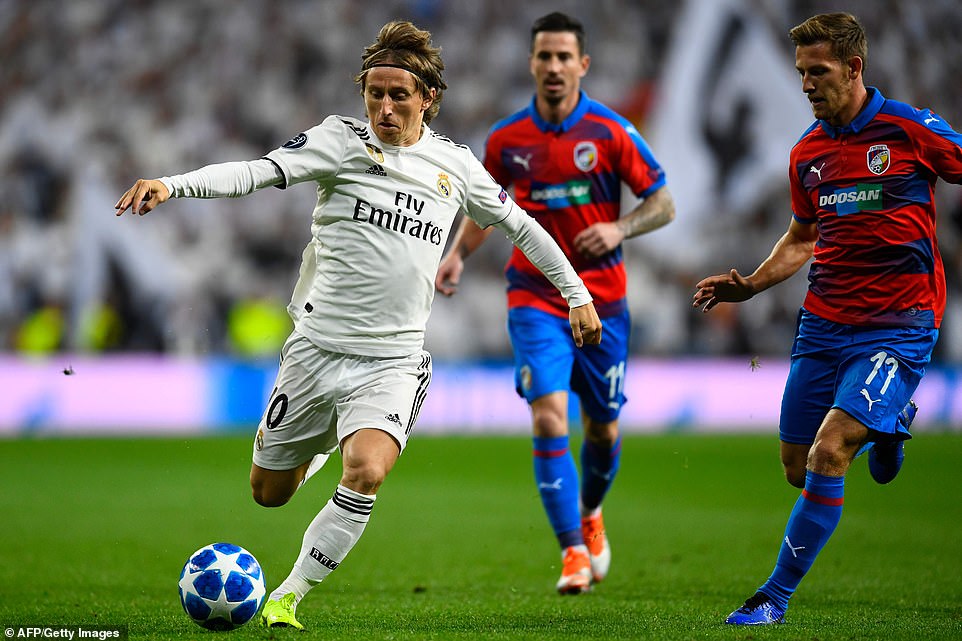 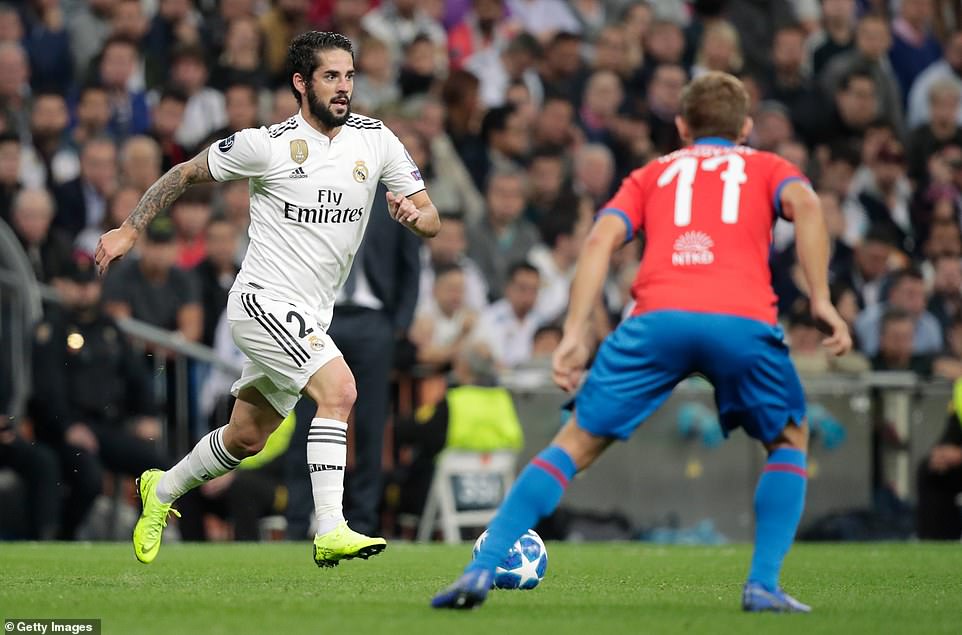 Limberski then brought down Vazquez in the area but the referee Orel Grinfeld waved away appeals. As half-time approached Lopetegui looked increasingly nervous in his technical area. Madrid had created nine chances, with four on target, but they had still only scored once, and at the other end they were giving Plzen far too much time and space.

Just before the break the Czech side missed their best chance of the first 45 minutes. Marcelo was dispossessed high up the pitch. Ramos went across to cover him but he did not stop the cross coming in.

Patrik Hrosovski should have converted but he got under the chance and scooped it over the bar.

It was a let-off of sorts for Madrid. They had got aawy with not conceding but the Bernabeu whistled them for the first time on the night and the shrills of disaproval continued to half time. 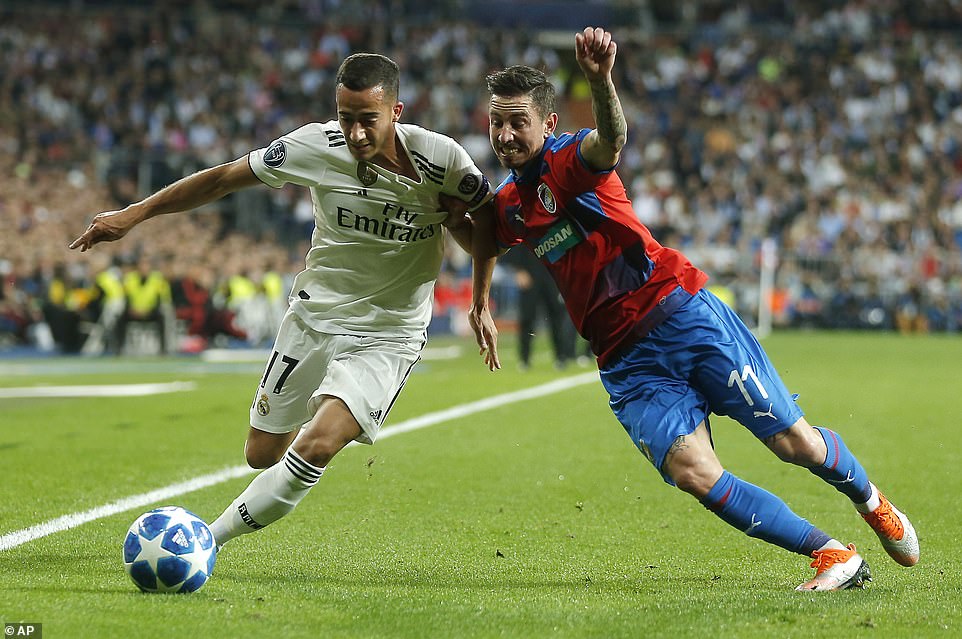 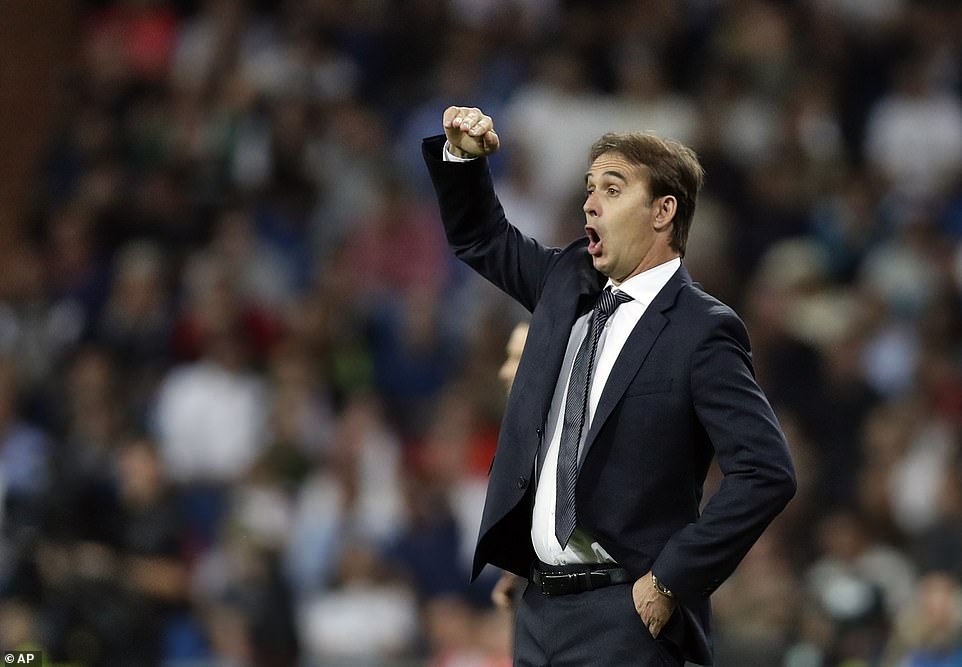 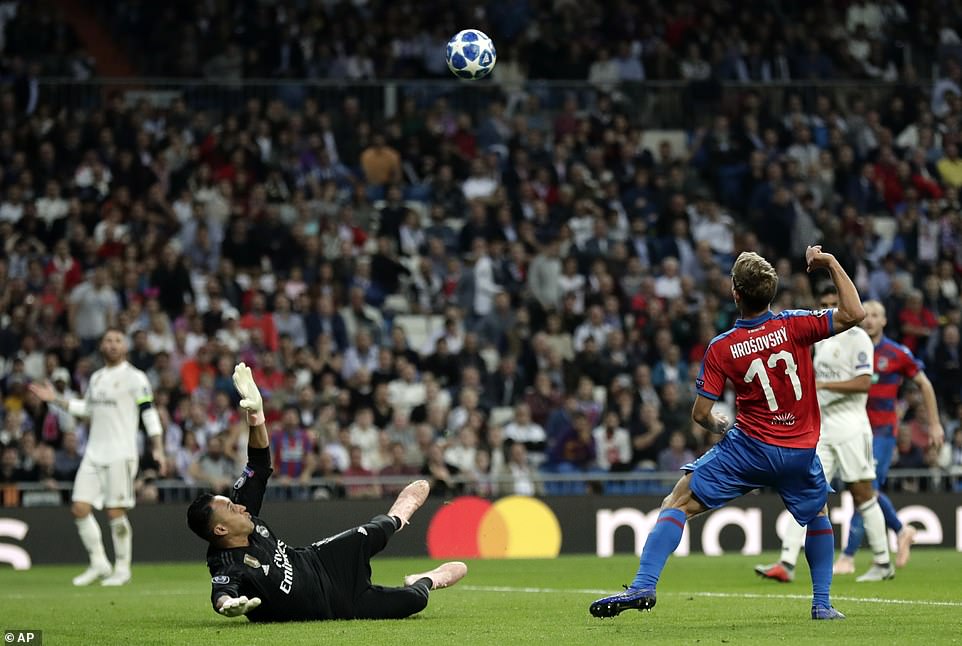 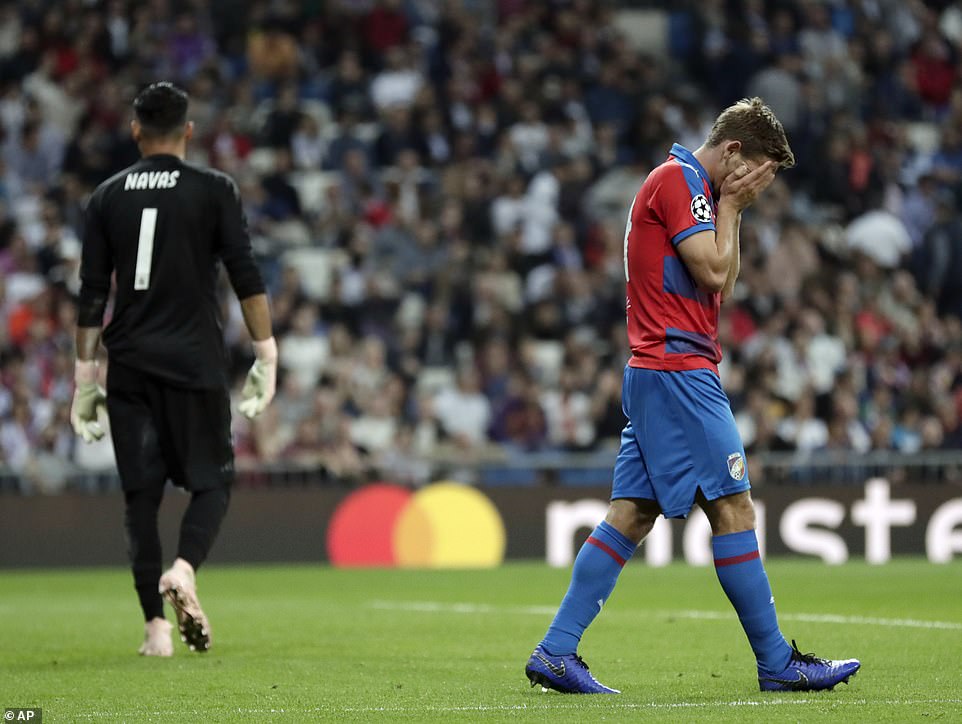 There were two more chances for the visitors inside the first six minutes of the second period. Again the poor finishing saved Madrid.

They finally got the second on 56 minutes and it was a move started by substitute Fede Valverde who had just come on for Isco. He nudged the ball forward to Bale who flicked it to Marcelo. The Brazilian buried it for his second goal in two games.

Patrik Hrosovski pulled a goal back with 11 mintues left exposing the ongoing defensive frailties of Sergio Ramos who was not helped by Marcelo. The centre-back picked up a late yellow card and the left-back, who hobbled off at the end after a kick on the ankle, continues to be consistently better in the opponent’s box than his own.

Bale had already been taken off after his 200th game for Madrid when the goal went in. He heard the subsequent whistles from the bench. It still seems likely that he will have his fifth different coach, sooner rather than later. 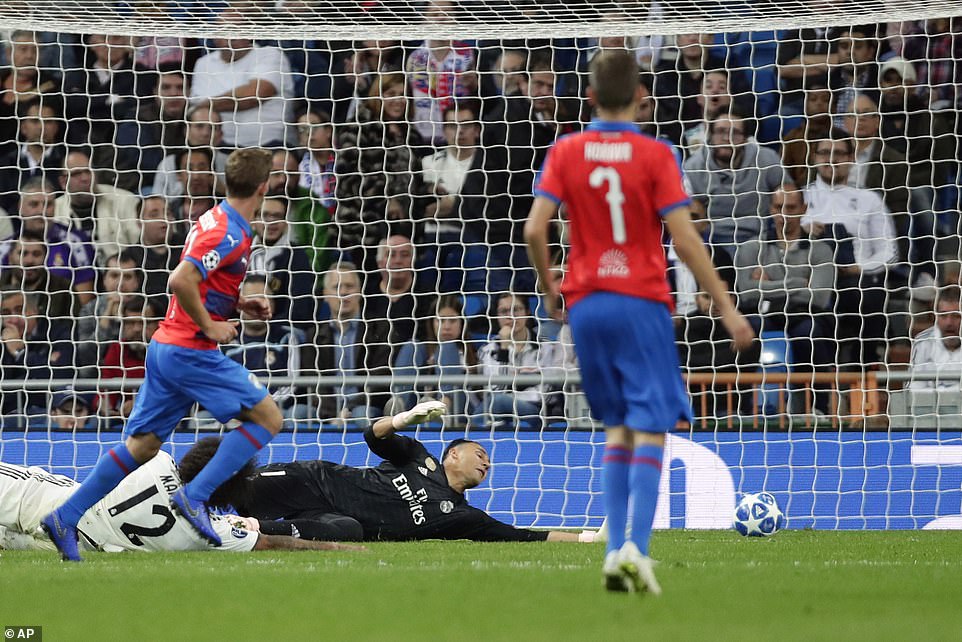 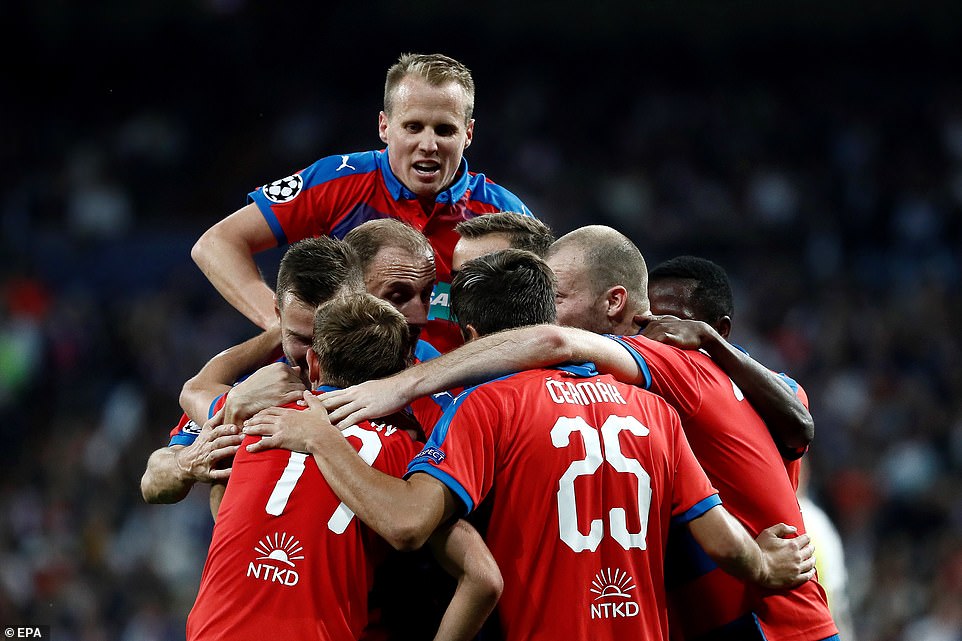 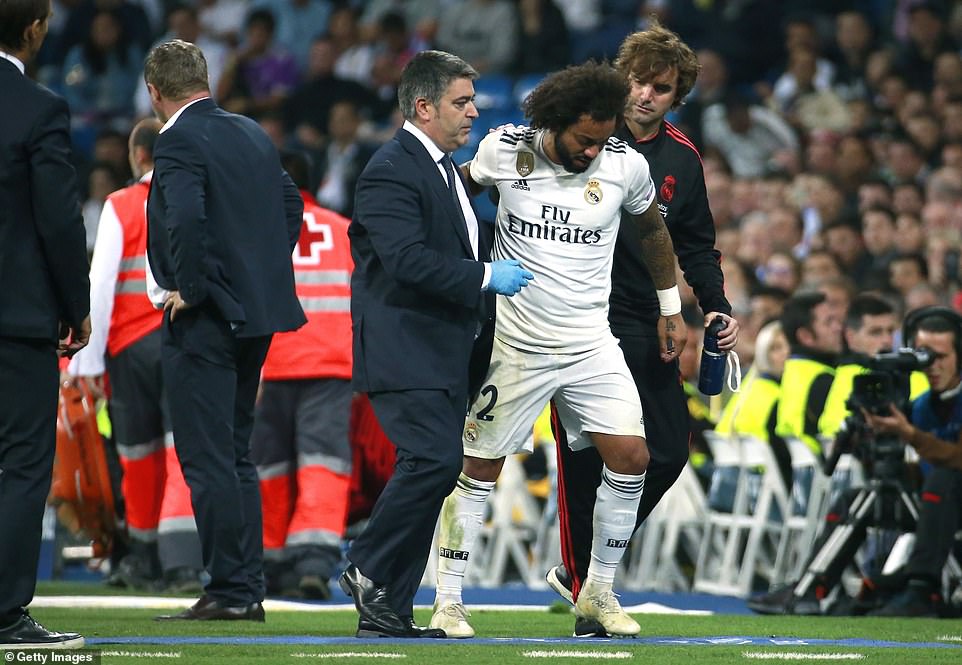