Real Madrid face the embarrassment of playing the Europa League unless they beat Galatasaray in a huge Champions League clash… the knives are out for Zinedine Zidane and he needs Eden Hazard, Karim Benzema and Co to silence the critics NOW

They know what would really be hell for the club that has won the European Cup 13-times – having to play in the Europa League.

After losing to the team with the smallest wage bill in La Liga at the weekend they go to Turkey knowing nothing less than a win will do. 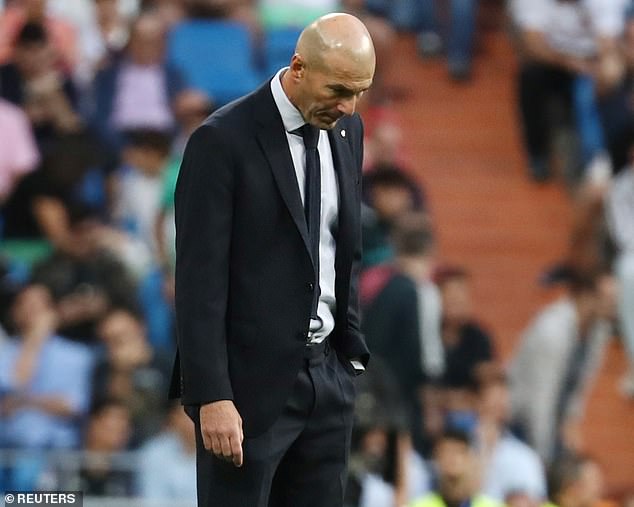 Zinedine Zidane knows the pressure is immense, with Champions League status in the balance

If they lose to Galatasaray they will stay bottom of Group A with one point from three games. Suddenly the indignity of having to give up their Thursdays will look like it could become a reality.

From the Champions League to the Europa League. Like being kicked out of Augusta and sent down to the local Pitch and Putt to frame it in terms that Gareth Bale would appreciate. He has been Real Madrid’s best attacking player this season despite being discarded by Zinedine Zidane in the summer.

But the calf knock he picked up against Croatia during the international break has ruled him out of this one.

That game also claimed Luka Modric to injury and so without two of his most reliable European performers Zidane has to find from somewhere a performance that will make supporters forget the horror shows against Paris Saint Germain and Club Brugge. 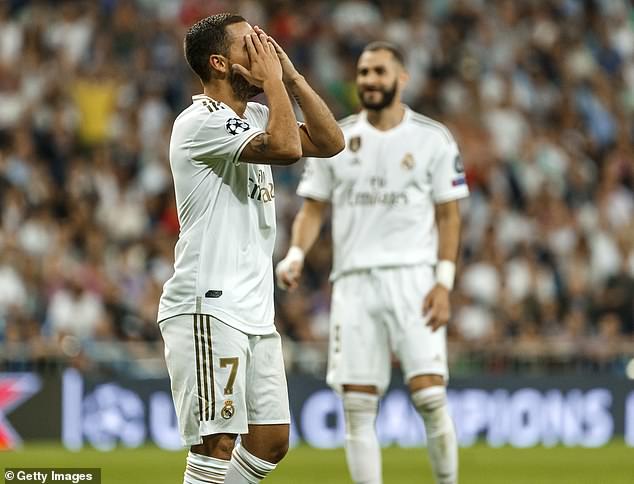 At the weekend he picked a second-string team to face relegation stragglers Mallorca, clearly concerned by the prospect of facing Galatasaray three days later.

First choice right back Dani Carvajal was rested, Raphael Varane was left on the bench, Toni Kroos [just recovered from an abductor muscle injury] was not risked, and Eden Hazard was allowed time off for paternity leave.

Real Madrid never really threatened Mallorca and were beaten by a first half goal from Junior Lago who bypassed reserve full-back Alvaro Odriozola and buried a shot beyond Thibaut Courtois. Spanish football statistician MisterChip tweeted that it was the 12th shot the Belgian keeper had been beaten by in 24 attempts.

Carvajal, Kroos and Varane will all be back but the greater focus will be on Hazard who needs a big performance in a big game to start justifying the faith Zidane has in him.

For Zidane, Tuesday’s game is also crucial. The worst scenario would be defeat for Madrid, and three points for Club Brugge against Paris Saint Germain. That would leave the Belgian side second with five points and PSG top with six.

It would see the shadow of Europa League football loom larger than ever and two other shadows would also appear – those of Max Allegri and Jose Mourinho.

With the Clasico cancelled and so no game for over a week Real Madrid would have far too much time on their hands as a club not to consider the coach’s position and the availability of two out of work experienced coaches. 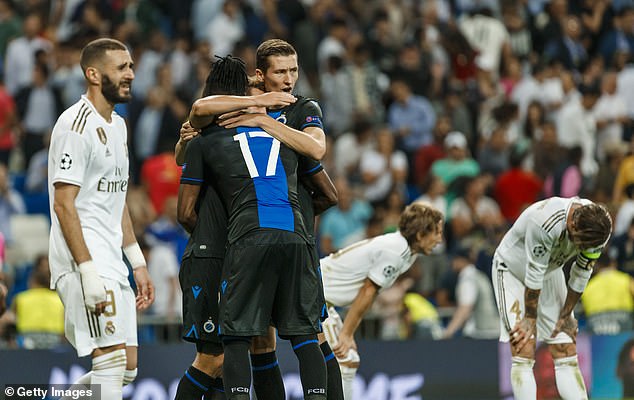 President Florentino Perez would love to be able to bring back Mourinho. The majority of supporters would oppose the move strengthening Allegri’s case.

Either way it would be an uncomfortable few days ahead of the club’s next game on October 30 at home to Leganes.

A win in Turkey would calm everyone down. Zidane is likely to call on his most tried and trusted to bring about the desired result. Carvajal, Sergio Ramos, Varane and Marcelo should start in defence.

Kroos will come back alongside Casemiro and Fede Valverde who was also rested for most of Sunday’s game. That would leave only one question: who plays instead of Bale alongside Karim Benzema and Hazard?

It is unlikely to be Luca Jovic. The 60m euros signing has not scored for a club side since he did so against Chelsea for Eintracht Frankfurt in the Europa League semi-finals last season.

James Rodriguez could get the nod over the erratic Vinicius who is yet to match his ability to create chances with a capacity to take them.

Galatasaray are waiting to see if Radamel Falcao can overcome an Achilles problem to face Madrid. The former Chelsea striker is 33-years-old now but he knows all about scoring against Real Madrid in big games. 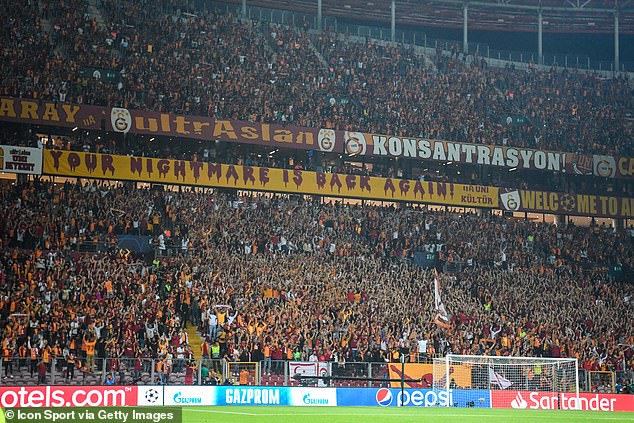 Galatasaray fans will create a hostile environment, as banners label the stadium a ‘nightmare’

This, in the city that will host the final, and with Zidane’s future back on the line, is a very big game.

The Real Madrid coach has a 50 per cent win ratio since coming back – that compares poorly with his predecessor Santiago Solari who won 70 per cent of the games he took charge of.

‘All this with Mourinho on the loose,’ said Diario AS on Monday. The whispers of another early-season managerial change are increasing in volume. The previously unspeakable Europa League is being mentioned too.

Zidane needs the likes of Hazard, Benzema and Courtois to silence Real Madrid’s chattering classes. Defeat in Turkey will give them plenty to talk about and over a week without a game to do so.