Real Madrid fans are relishing the prospect of watching 18-year-old Takefusa Kubo after his latest impressive display at the Copa America.

They completed the signing of the ‘Japanese Messi’ earlier this month – and he was once on the books at Barcelona.

He will join up with their Castilla youth team in Spain’s third division next season, but Real fans seem keen to bring him in as soon as possible.

Clips of Kubo in action during Monday night’s 1-1 draw with Ecuador have been circulated on Twitter.

And many are revelling in the Japan teenager’s display as he showed off his range of passing and dribbling skills.

Gary Meenaghan wrote on the social media site: ‘On this performance, believe the hype. Only turned 18 earlier this month yet best on the field.

‘Quick, direct, lovely first touch, intelligent on and off ball, deceptively strong and had last-gasp volley ruled out by VAR. #JAP 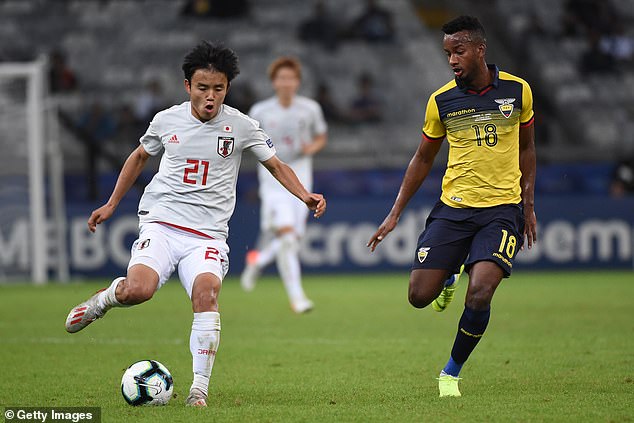 Naafiu Lathyf ‏ tweeted: ‘He is not Messi. He is Kubo.’

One fan bemoaned Barcelona’s failure to hang onto the youngster.

Barca_kingz10 wrote: ‘Ridiculous. Our board let another la Masia student slip away. You guys have a gem. Please treat him better then our board did.