Real Madrid: Karim Benzema is still the past, present and future at the Bernabeu

It was fitting that Ronaldo was the first high-profile former player to come out in favour of Karim Benzema being given the Ballon d’Or.

Back in 2009 when the French forward signed from Lyon, Real Madrid president Florentino Perez’s idea was that the 21-year-old would become the ‘new Ronaldo’.

Perez thought the youngster with the same closely-shaved crop would develop the same thunder-boots finishing and outdo Madrid’s Brazilian forward.

He has long gone past Ronaldo in goals for Madrid – in fact only Cristiano Ronaldo, Raul, Alfredo di Stefano and Santillana are ahead of him.

Karim Benzema is a Real Madrid legend, with nearly 300 goals for the club across 12 years 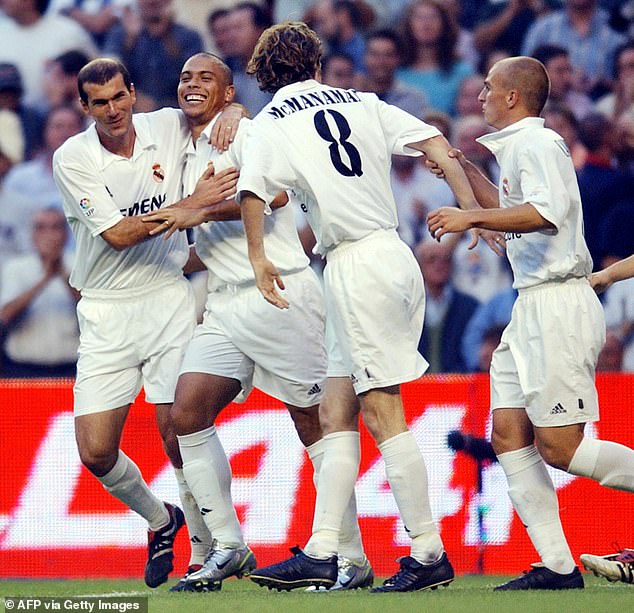 He was signed as ‘the new Ronaldo’ (second left), and the Brazilian praised him this week

He has also developed as the club’s leader on and off the pitch and, while Leo Messi’s Copa America success and his goal haul last season will surely see him win the prize for the seventh time, Benzema ought to be on the podium – and if he does make the top three it will be an incredible achievement for someone many thought would diminish without Cristiano alongside him. 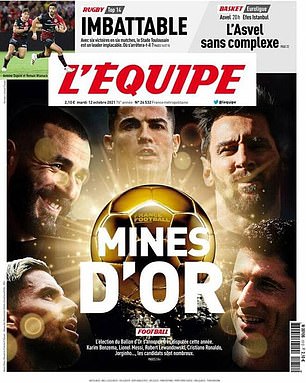 Not only is he very much the best Madrid have right now, and part of the club’s history winning those four Champions Leagues, but he is the future too despite his 33 years. Back in the international fold with France, he is now being seen as key to getting the Kylian Mbappe signing over the line.

At every international break the chance is never lost for him to cement a partnership that has now seen France win the Nations League and could be transferred to club football next summer.

‘I enjoy playing alongside him,’ he told TVE, ‘and why won’t it be at Madrid too? I have said it before and I will say it again. One day it could happen.’

The prospect of Mbappe up front next season with Benzema and the pair going into the World Cup in Qatar together as team-mates both for club and country is the Madrid plan.

If it does happen then he will have to return to type and go back to the years of making sure someone else gets to pick up the Ballon d’Or – his contribution to Cristiano Ronaldo’s individual honours would not be disputed by the Portuguese himself. 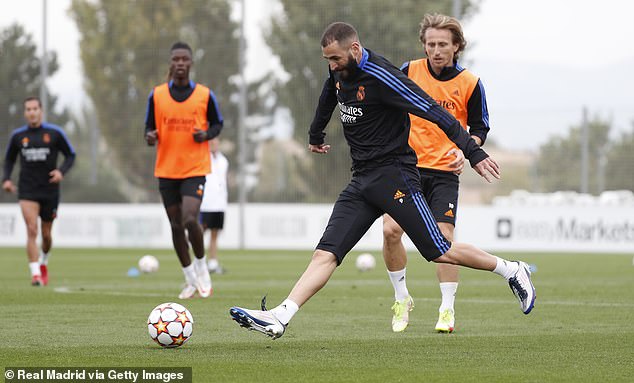 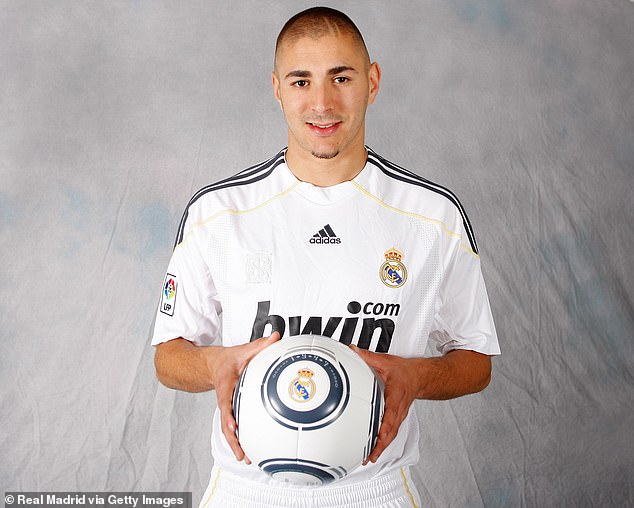 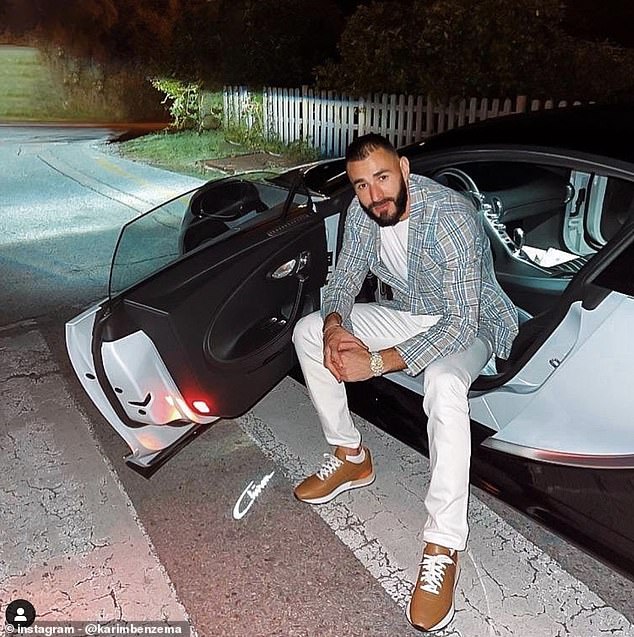 He is now 33, and has grown to become a leader on and off the pitch at Real Madrid

Benzema has grown up at Madrid. He struggled as a 21-year-old in his first season and when Jose Mourinho blustered in as his new coach in 2010 and labelled him ‘a cat’ it never really helped. (The bizarre quote was: ‘When I don’t have my dog, I will have to go hunting with my cat,’ in reference to the contrasting merits of his two strikers at the time – Gonzalo Higuain and the Frenchman.)

But he admits having learned from Mourinho and thrived under first Carlo Ancelotti and then Zinedine Zidane. When Zidane was tipped to be leaving the club at the end of last season Benzema went public with what turned out to be misplaced certainty that Zizou was staying. One of the reasons why Ancelotti was hired in the summer was his excellent pre-existing relationship with Benzema.

The Italian coach has come back to the club to find the forward in even better form than when he left. It’s hard to underestimate just how important he is for Madrid now. They no longer have a team full of intimidating players. Lining up in the tunnel before big games a glance across at the men in white no longer instills fear in the opposition. Benzema and keeper Thibaut Courtois are the last remaining ‘awe’ players likely to catch the breath of an opponent pre-match. 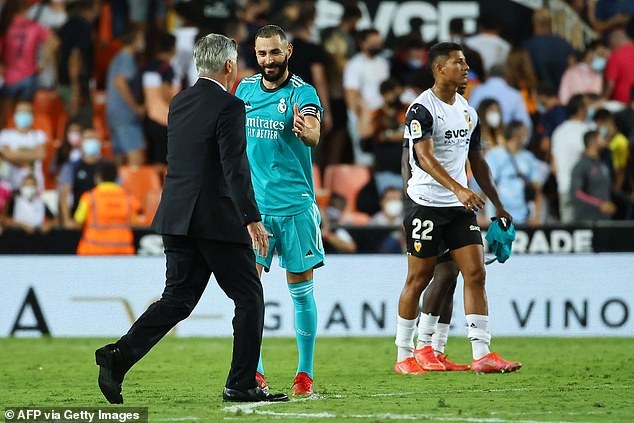 The return of Carlo Ancelotti (left) has proven successful so far, and the pair get on well 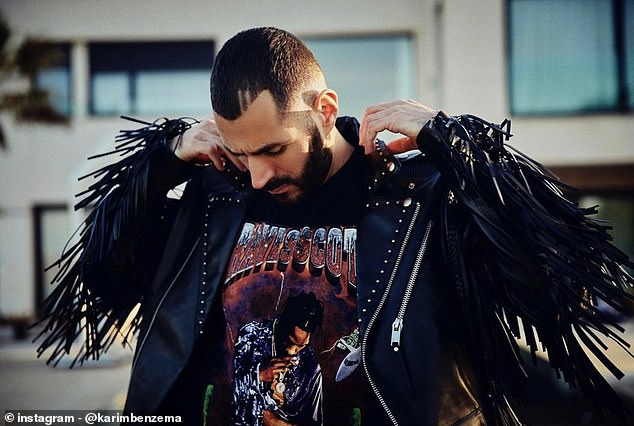 Benzema, although past 30, is still perhaps the most vital cog in the Real Madrid machine 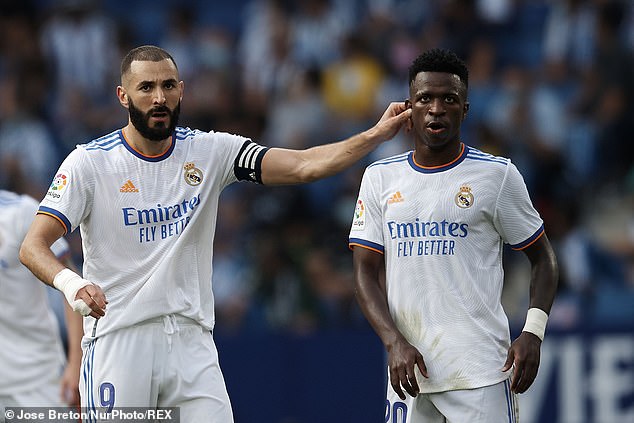 The respect comes from within the dressing room too. Had any other player been filmed dressing down Vinicius in such a devastating way at half-time against Borussia Monchengladbach last season they might have been in more trouble. But such is Benzema’s status the moment passed without so much as an apology from him for having advised Ferland Mendy not to pass the ball to Vinicius because he appeared to be ‘playing for the other side’.

Benzema and Vinicius’s relationship is firmly fixed now and just as Mourinho’s tough love might have once helped Benzema, so Vinicius seems to have risen to the challenge of showing himself worthy of being Benzema’s strike partner.

The challenge will be for Vinicius to be the third man in Madrid’s attack next season if Mbappe joins. Benzema will definitely be there. The Ballon d’Or podium is likely to have three over-30s on it and Benzema sees no reason to bail out while there is so much he feels he can still achieve.

France welcomed him back into the fold and will fancy their chances in Qatar with a Benzema, Antoine Griezmann, Mbappe front three. Madrid will be back among the Champions League favourites with Karim, Kylian and Vinicius.

The two biggest competitions in football have not seen the last of Benzema and his place in the shake-up for the top individual award might not be the last either. 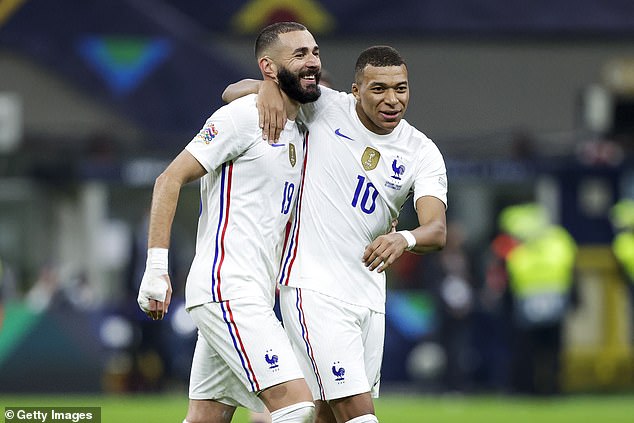 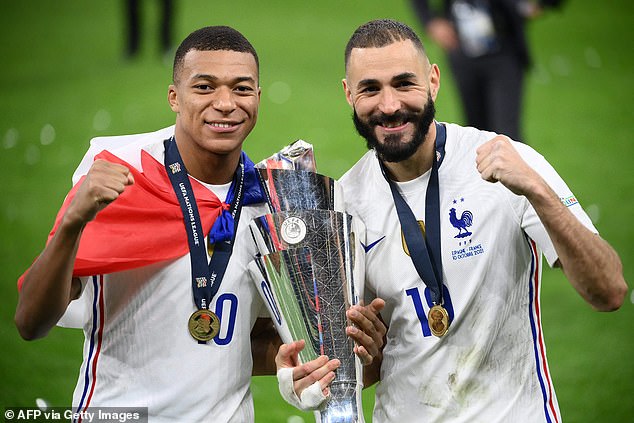