The star witness in George Pell’s trial kept his silence for two decades because he was worried about the ramifications of speaking out, and because he wanted to his live his life how it was before the abuse.

Pell was last December convicted of molesting two choirboys at St Patrick’s Cathedral in 1996, when he was the newly-installed Archbishop of Melbourne.

The 78-year-old, who is the most senior Catholic representative to be found guilty of child sex abuse, failed to overturn his conviction in the Court of Appeal on Wednesday.

There is little known about Pell’s victims, who were aged 13 at the time of the cardinal’s offending.

George Pell, the most senior Catholic representative to be found guilty of child sex abuse, failed to overturn his conviction in the Court of Appeal on Wednesday 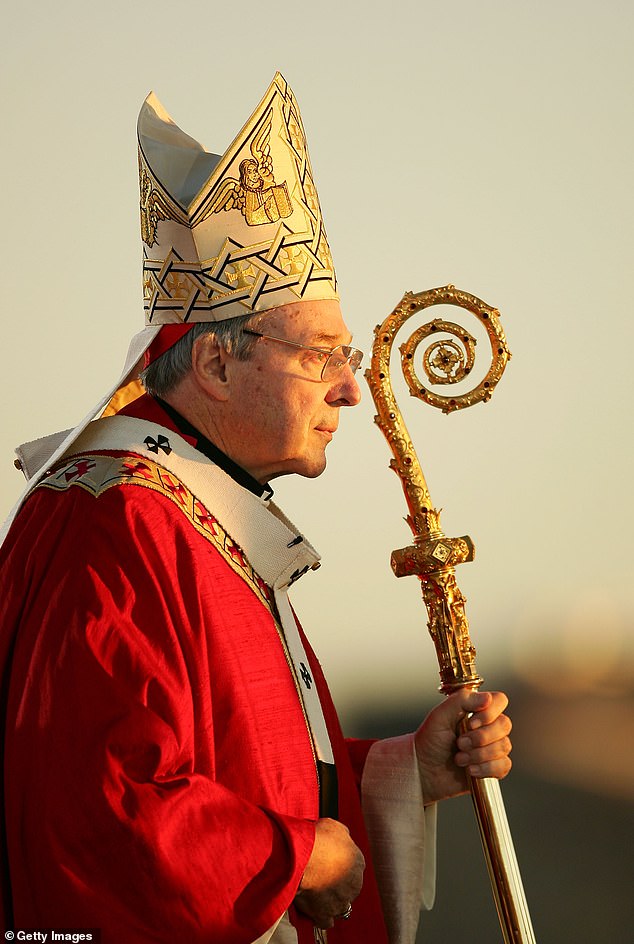 There is little known about Pell’s victims, who were aged 13 at the time of the cardinal’s offending. The case against Pell relied heavily on the testimony and evidence of one ‘choirboy’, also known as the complainant and ‘A’

The case against Pell relied heavily on the testimony and evidence of one ‘choirboy’, also known as ‘Witness J’ or simply ‘A’.

The other victim died in 2014 without lodging a complaint against Pell. A reported the historic abuse to police in June 2015.

In the court documents, A spoke about the difficulty of coming forward to police with the allegations as he was simply trying to live his life as he had ‘before’ the assault.

In terms of remaining tight-lipped for almost two decades, A explained he couldn’t fully fathom what had happened to him to then be able to share it.

He was also fearful about his accusations ruining his schooling at St Kevin’s College, where he was on a choral scholarship. 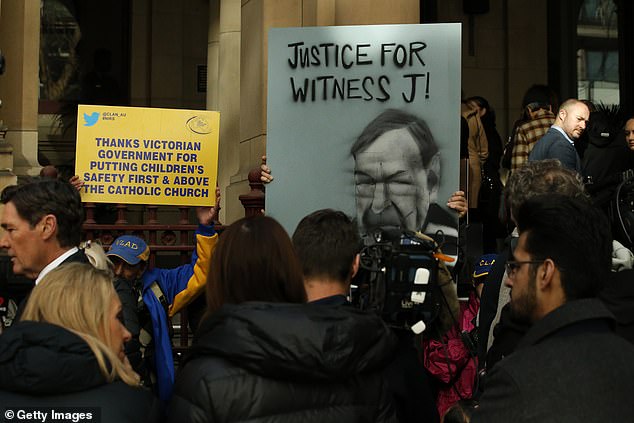 A explained he dealt with the abuse by pushing it to the darkest corners of his brain.

He said it took a lot of courage to give a statement against Pell to police and he felt greater responsibility to speak up after the death of his friend.

‘I gave a statement to the police because I was thinking of him and his family. I felt that I should say what I saw and what had happened to me. I had experienced something terrible as a child, and I wanted some good to come of it.’

The other choirboy died of a drug overdose, aged 31.

His father was ecstatic Pell’s appeal was denied this week, telling reporters it was a ‘great load’ lifted off his shoulders. 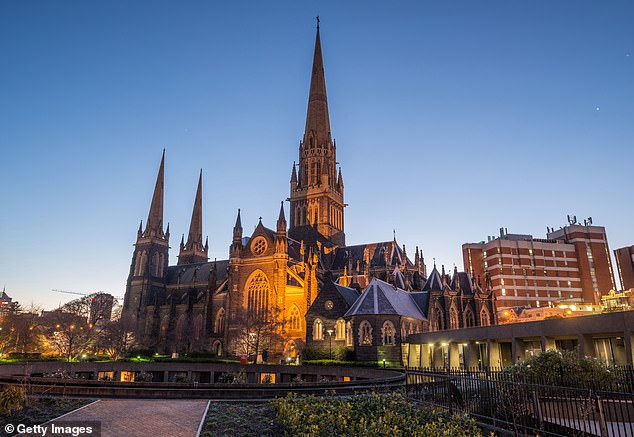 Pell was last December convicted of molesting two choirboys at St Patrick’s Cathedral in 1996, when he was the newly-installed Archbishop of Melbourne 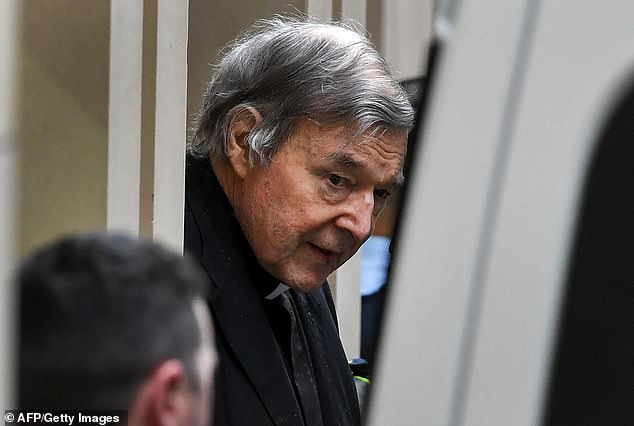 ‘I’m sad that my son’s not here to see it. I’m really happy for the other victim,’ the father said.

In the book, Cardinal: The Rise and Fall of George Pell, journalist Louise Milligan speaks about A, referred to as ‘The Kid’, as an ideal witness amid a police investigation.

She said the victim is university educated, hadn’t been in trouble with the law and is a ‘pillar of his community’.

‘He’s managed, just, to keep it together. He’s been able to compartmentalise. He’s the sort of complainant you’d want as a Victoria Police detective alleging historic crime,’ Milligan wrote in the book. 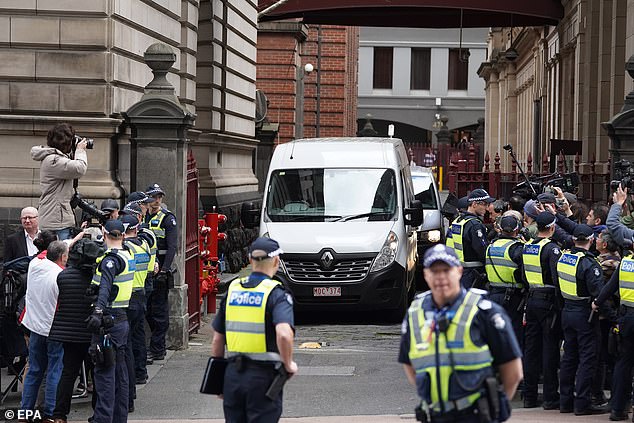 Pell leaves the Court of Appeal on Wednesday, with his van surrounded by a large police presence

From allegations to sentence: A timeline of the George Pell case

* A second indecent act is committed by Pell against one of the choirboys in a corridor at the Cathedral, the same jury found.

* The Herald-Sun reports Pell is being investigated by Victoria Police’s Sano taskforce for ‘multiple offences’ committed while he was a priest in Ballarat and Archbishop of Melbourne.

* Pell says the allegations are ‘without foundation and utterly false’ and calls for an inquiry into how the police investigation became public.

* Victoria Police Chief Commissioner Graham Ashton asks the anti-corruption watchdog to investigate the leak, but denies it came from police.

* Pell gives evidence to the Royal Commission into Institutional Responses to Child Sexual Abuse in Ballarat.

* Under Vatican rules, Pell gives Pope Francis his resignation on his 75th birthday, as is customary. It is not accepted.

* Victoria Police investigators hand over to the state’s Office of Public Prosecutions a brief of evidence on allegations of sexual abuse by Pell.

* Officers travel to Rome to interview Pell over the abuse claims. He voluntarily participates in the interview.

* Police present their final brief of evidence to the Office of Public Prosecutions to consider charges.

* Prosecutors give police the green light to charge Pell.

* He denies the charges and vows to clear his name.

* Pell takes leave from his Vatican finance chief role to fight the charges.

* Supporters set up a fund to help Pell fight the charges.

* Prosecutors drop one of the charges against Pell.

* A month-long committal hearing begins to determine if Pell will face trial.

* Mr Richter claims police conducted a ‘get Pell operation’ and accuses magistrate Belinda Wallington of bias. She refuses to disqualify herself from the case.

* Ms Wallington orders Pell stand trial on some charges but throws out others.

* A Victorian County Court employee is sacked for looking up information on the Pell case.

* The 1990s ‘cathedral trial’ begins in the Victorian County Court in Melbourne.

* Pell pleads not guilty again to one charge of sexual penetration of a child under 16 and four of indecent acts with a child, over incidents involving two 13-year-old choirboys at St Patrick’s Cathedral in 1996.

* The jury is discharged, unable to reach a verdict following a week of deliberation. Some jurors weep.

* A retrial begins. The jury aren’t told of the previous hung jury.

* Pell is found guilty on all charges by an unanimous jury.

* Suppression orders prevent Australian media reporting the verdict but it spreads through international media within hours.

* Hearings begin ahead of the second trial. Prosecutors drop another charge

* An appeal is filed against the cathedral trial conviction.

* Prosecutors withdraw all remaining charges against Pell and drop a second trial over allegations Pell indecently assaulted boys in Ballarat in the 1970s when he was a parish priest.

* Pell is taken into custody on February 27 as the plea hearing begins.

* Pell is sentenced by County Court Chief Judge Peter Kidd to a maximum of six years in prison. He must serve at least three years and eight months in jail before being eligible for parole. He will be a registered sex offender for life.

* Court of Appeal considers Pell’s application to challenge his conviction on June 5 and 6.