She has dropped 18kg since embarking on a health kick earlier this year.

And Rebel Wilson looked incredible as she went for a sunkissed hike in a crop-top on Tuesday.

The actress, 40, displayed her taut abs and cleavage in a black crop-top as she posed for a scenic shot in the hills, with sun beaming down on her.

Wow: Rebel Wilson looked incredible as she went for a sunkissed hike in a crop-top on Tuesday

The Bridesmaids star also drew the eye to her trim legs in high-waisted black leggings.

Her blonde locks were pulled into a chic updo, held back by her headphones, while she appeared to go make-up free.

Rebel shared an empowering message alongside the photo, where she revealed exercise had helped her combat a ‘bad day.’

She wrote: ‘Started off having a bad day but took myself on a giant walk, listening to some motivational podcasts & audiobooks out in gorgeous nature…drank water…and you know what feel soooo much better now. 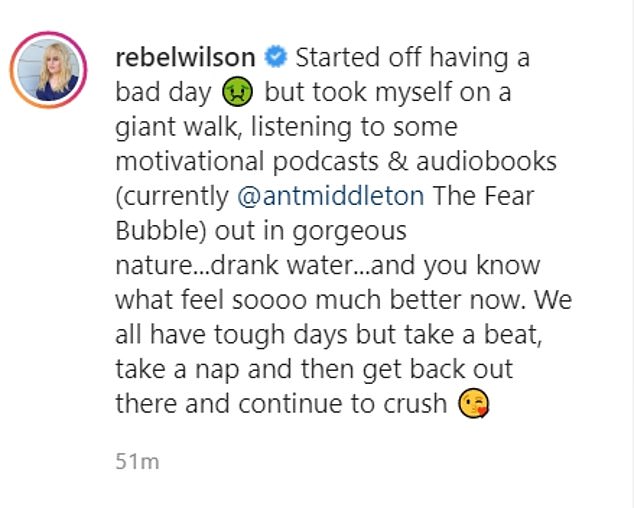 Message: Rebel shared an empowering message alongside the photo, where she revealed exercise had helped her combat a ‘bad day’

‘We all have tough days but take a beat, take a nap and then get back out there and continue to crush.

In a new interview with People magazine, Rebel admitted to scoffing 3000 calories daily before embarking on her new diet.

‘Before I was probably eating 3,000 calories most days, and because they were normally carbs, I would still be hungry,’ the 40-year-old explained.

The blonde beauty has now switched to a high protein diet instead, which she said was ‘challenging’ because she wasn’t a big meat eater before.

‘I eat fish, salmon, and chicken breast,’ she explained.

Rebel revealed that she’s tried to make an overall healthy lifestyle change for herself without strictly forbidding herself from indulging from time to time. 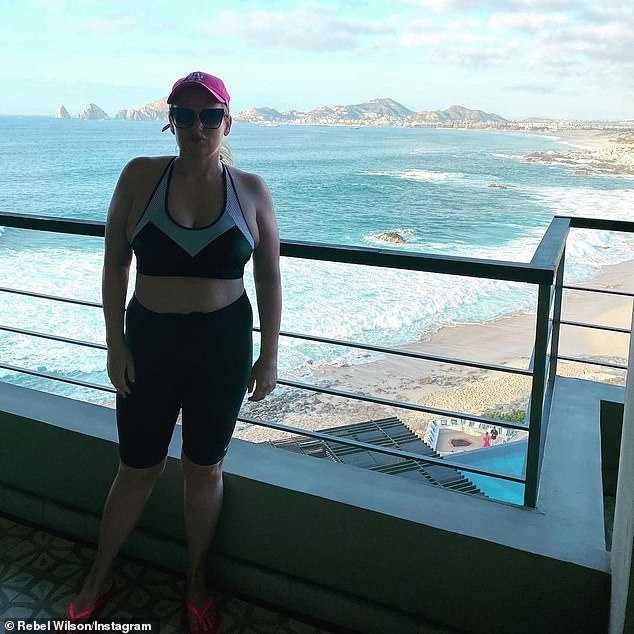 Health journey: In a new interview with People magazine, Rebel admitted to scoffing 3000 calories daily before embarking on her new diet 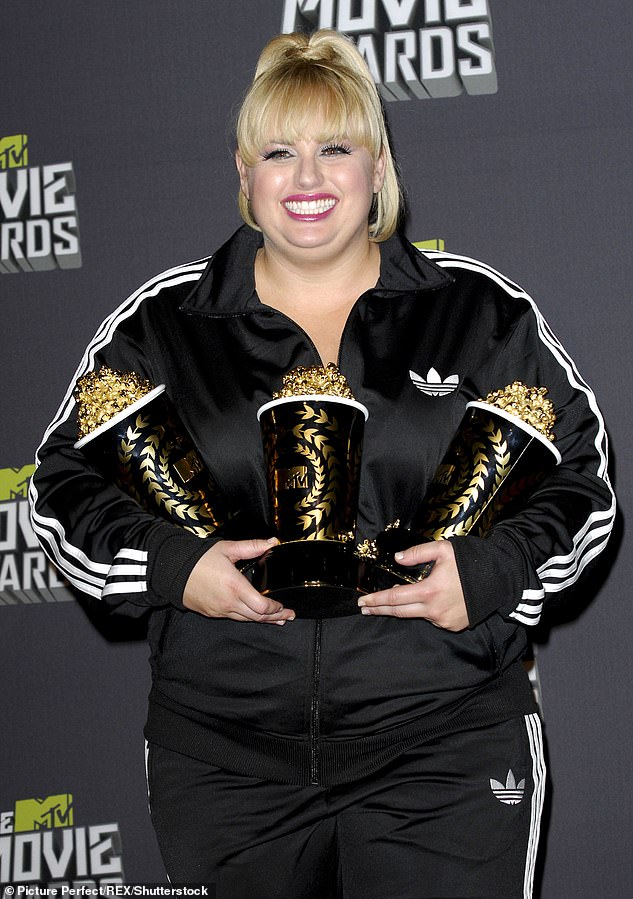 ‘Before I was probably eating 3,000 calories most days, and because they were normally carbs, I would still be hungry,’ the star admitted. (Pictured in 2013)

The actress admitted that she’ll still slip-up from time to time and eat fast food, but these days she only eats half the amount that she used to.

In addition to changing her diet, Rebel has also been working out with celebrity trainer Jono Castano.

Rebel opened up about how her ‘year of health’ changed her life while talking to Drew Barrymore on her daytime chat show last week.

The Pitch Perfect star admitted how turning 40 inspired her to rethink her health habits while talking to Drew.

Talking about her weight loss and wellness journey, Rebel explained: ‘Drew, for the last few years I’ve been theming my years, so I had the Year Of Fun, last year I had the Year Of Love and this year I’m like, “It’s going to be the Year Of Health,” because I turned 40 this year in March and I never really focused on my health which was probably obvious.’ 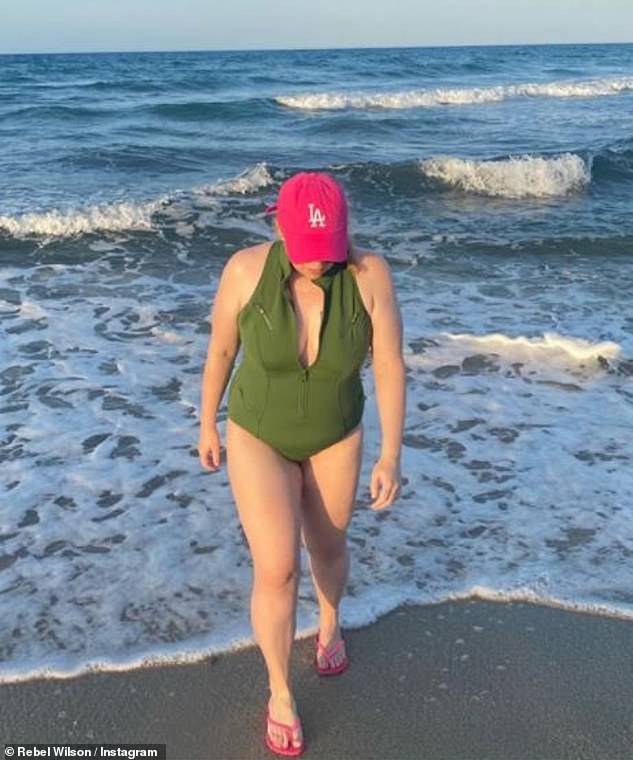 Lifestyle: Rebel revealed that she’s tried to make an overall healthy lifestyle change for herself without strictly forbidding herself from indulging from time to time

She realised how her stressful lifestyle as an actress was affecting how she took care of herself, saying: ‘I was going all around the world, jet setting everywhere and eating a ton of sugar that was kind of my vice.

‘I have a very sweet tooth, I love desserts. I’ve tried, like so many women out there, fads and diets and things before and I’m like I need to do a really holistic approach this time.’

That approach meant taking on the emotional aspects of her eating habits as well as nutritional basics.

‘I think what I mainly suffered from was emotional eating and dealing with the stress of becoming famous internationally,’ she said. ‘There is a lot of stress that comes with it and I guess my way of dealing with it was just like eating donuts.’

‘So I was working on the mental side of things of why was I doing that and why was I not valuing myself and having better self-worth. And then, also on the nutritional side my diet was mainly all carbs, which are delicious, but for my body type I needed to eat more protein.’

‘So I lost Drew, I think it’s like 40 pounds this year so far and I want to lose a few more,’ Rebel went on.

Though her figure has changed, Wilson says she’s still a fan of her curves and doesn’t see herself going overboard with the weight loss.

‘I love my curves and stuff, I don’t think I’ll ever go too skinny but I feel so much healthier,’ she explained. ‘And I don’t know whether it’s a thing with ladies when you turn 40, I feel like I really have come into my own now and not just with health but with my career.

‘I feel more in control and I get to produce movies now which is amazing and kind of have more control of the content. I just feel like everything seems to be coming together, maybe I’m a late bloomer or something but I’m slowly getting it together. 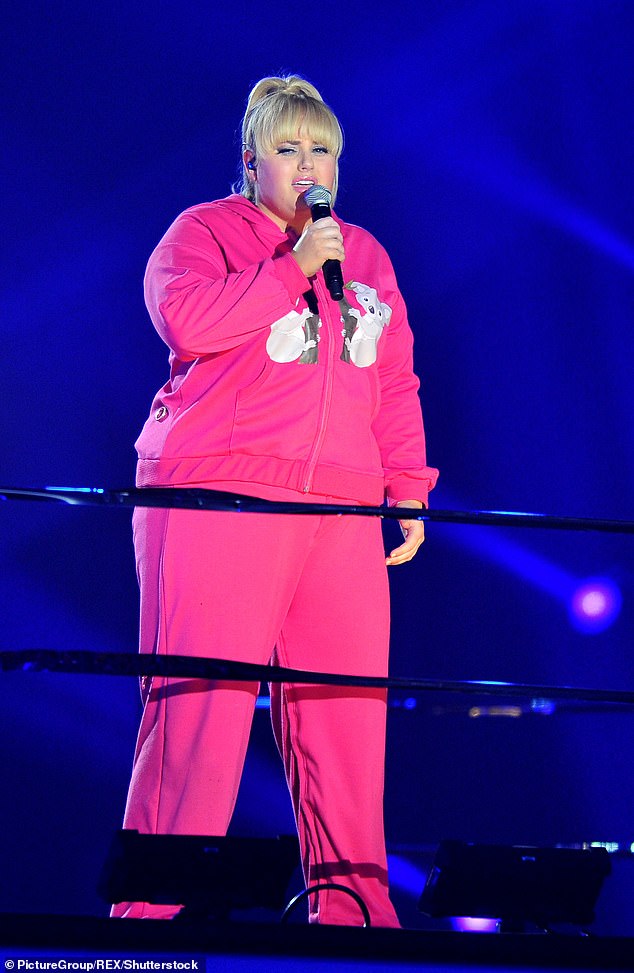 Flashback: Rebel was much heavier before her lifestyle overhaul. (Pictured in 2013)