Australia could sink into recession if the Reserve Bank raises interest rates even just one more time, an economist warns.

The Big Four banks are all expecting an interest rate rise on February 7 that would take the cash rate to a new 10-year high of 3.35 per cent – marking the ninth consecutive increase.

Deloitte Access Economics partner Stephen Smith, an economist, said even one more rate rise in 2023 could push Australia into a recession.

Australia could sink into recession if the Reserve Bank raises interest rates even just one more time, Deloitte Access Economics partner Stephen Smith, an economist has warned (pictured is a Melbourne auction in 2022)

‘In our view, any further increases in the cash rate beyond the current 3.1 per cent could unnecessarily tip Australia into recession in 2023,’ Mr Smith said in a Business Outlook report.

‘On the Reserve Bank’s own figuring, mortgage repayments, including principal and interest, are already on track to rise to a record high as a share of household disposable income over coming months.’

What another rate rise would mean for YOU

Credit ratings agency Moody’s Analytics says there is a one-in-three chance of a recession occurring in Australia during the coming year, compared to a 66 to 100 per cent chance in New Zealand.

The Commonwealth Bank, Westpac, ANZ and NAB are each expecting a quarter of a percentage point rate rise next month, following the release on Wednesday of official inflation data for the December quarter.

Mr Smith said the Reserve Bank should keep interest rates on hold, even though inflation is now well above its longstanding 2 to 3 per cent target.

‘There is an Everest of evidence to suggest interest rates should stay on hold from here,’ he said.

Inflation in the year to September surged by 7.3 per cent and the Reserve Bank is expecting the December quarter data to show the annual consumer price index climbing by 8 per cent, a level unseen since 1990. 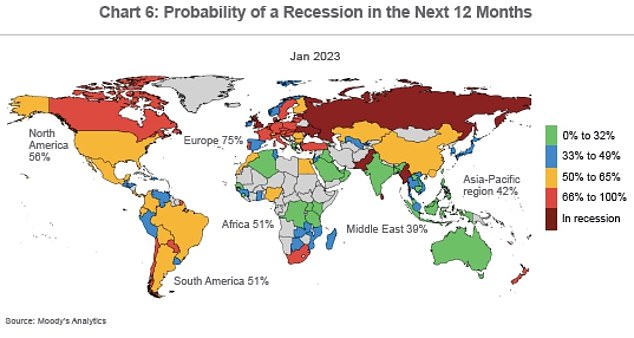 Moody’s Analytics still rates the chance of a recession in Australia during the next 12 months as a zero to 32 per cent chance, compared with a 66 per cent to 100 per cent chance in New Zealand

Westpac is expecting the Australian Bureau of Statistics figures to show a more moderate 7.4 per cent headline inflation pace in the year to December.

‘Wage inflation in Australia is still lifting as labour markets remain tight through the first half of the year,’ he said.

Westpac is expecting rate rises in February, March and May, that would take the Reserve Bank cash rate to an 11-year high of 3.85 per cent.

The Commonwealth Bank, Australia’s biggest home lender, is expecting February’s rate rise will be the last during this monetary policy tightening cycle.

But CBA’s head of Australian economics Gareth Aird is expecting inflation to peak at 7.7 per cent in late 2022.

‘We expect inflation pressures to abate relatively swiftly in 2023. But the annual rate still has further to rise,’ he said. 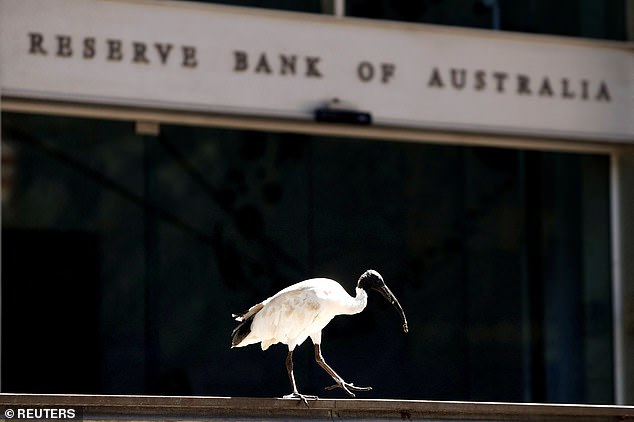 The Commonwealth Bank, Westpac, ANZ and NAB are all expecting a quarter of a percentage point rate rise next month, following the Wednesday release of official inflation data for the December quarter (pictured is the Reserve Bank of Australia building in Sydney)

The Reserve Bank last year raised interest rates eight times, marking the most severe pace of tightening since it began publishing a target cash rate in 1990, and only left them on hold in January because that is the only month it doesn’t meet.

Should a recession occur in 2023, it would mark the first interest rates-driven economic contraction since 1991.

Australia’s 29-year run without a recession was interrupted in 2020 by national Covid lockdowns before the Reserve Bank cut the cash rate later that year to a record-low of 0.1 per cent.

Reserve Bank Governor Philip Lowe in 2021 promised to keep interest rates on hold until 2024 ‘at the earliest’ only to raise rates in May 2022 for the first time since November 2010.

In a sign inflation may have peaked, used car prices since May have declined by 12 per cent following an easing of the global computer chips shortage that hampered car production, data for December from Datium Insights and Moody’s Analytics showed.

‘The decline is driven by increased new-vehicle supply as the semiconductor shortage eases,’ it said.

Rising interest rates would also make Australians less inclined to pay a premium for a secondhand car, with a 10 per cent drop predicted for 2023.

‘Demand for new and used vehicles will weaken over 2023. Australian households are under pressure from rising borrowing costs.’