The fires would produce the most damaging wildfire event in California’s history.

Forty two people died and over 8,000 structures were destroyed.

A firefighter monitors flames from a blackburn operation Friday, Oct. 13, 2017, in Glen Ellen, California. The October California wildfires was the most damaging wildfire event in California’s history. Forty two people died and over 8,000 structures were destroyed

WHAT IS THE WILDLAND-URBAN INTERFACE?

As such, fire department are fighting fires along the Wildland-Urban Interface (WUI), defined as areas where homes are built near or among lands prone to wildland fire.

The WUI is not a place, per se, but a set of conditions that can exist in nearly every community.

As the fire threatened new neighborhoods, media reports filled airwaves and front pages across the nation, with most coverage conveying a mix of compassion, grief, anxiety and disbelief.

And as usual, diverse groups began trying to explain the severity of this most recent wildfire disaster by referencing a unique confluence of environmental factors, such as high temperatures, strong winds, and lots of vegetation available as fuel.

But having researched the intersection of urban development and fire in the western U.S., including the 1991 Oakland Fire, I’ve come to see how flawed this way of looking at fires is.

Calling wildires a result of a ‘perfect storm’ is highly simplistic and arguably dishonest. It ignores the long and complex social-ecological fuse that actually leads to costly and injurious wildfire disasters.

The narrative of unruly natures

The article described four factors that could explain the size and destruction of this wildfire.

First, strong and dry easterly winds whipped across the landscape just as the fire ignited. 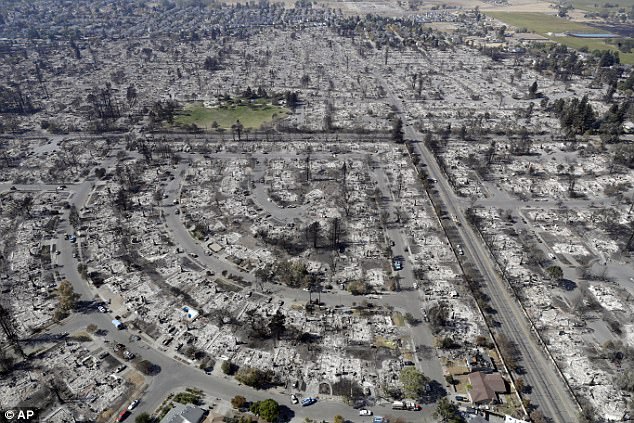 In this Oct. 14, 2017 photo, an aerial view shows the devastation of the Coffey Park neighborhood after a wildfire swept through it in Santa Rosa, California. Large swaths of areas impacted by the Wine Country Fires were not originally zoned as ‘Very High Fire Risk’

Third, an accumulation of dead vegetation around homes from protracted drought conditions and mountain pine beetle infestations resulted in landscapes that were particularly susceptible to ignition from flying embers.

And fourth, the fire erupted during a low humidity time of year, and after many months without rainfall.

According to this CNN article, these four dynamics converged to created ‘a perfect storm of factors’ that fanned the wildfires and contributed to their size, magnitude and ferocity.

Another news report from the same day titled, ‘California’s wildfires powered by a perfect storm of fire hazards’ added the role of climate change to the disaster-making equation, noting that rising temperatures are increasing fire hazards across the region.

As these accounts suggest, the ‘perfect storm’ narrative connotes a unique alignment of conditions that are both surprising and out of our control.

It implies the convergence of unusual, unforeseen and unavoidable circumstances.

There are two major problems with this brand of story telling.

The first problem involves what factors get included – and excluded.

Nearly always, the drivers of wildfire disasters referenced by the media and government officials are environmental.

These include statements such as ‘drought and heat wrought by stubborn ocean conditions have left great stretches of [the American West] dryer and more combustible than usual this year,’ or reports that dangerous fire activity is the result of ‘scorching heat and tinder-dry conditions across the West.’ 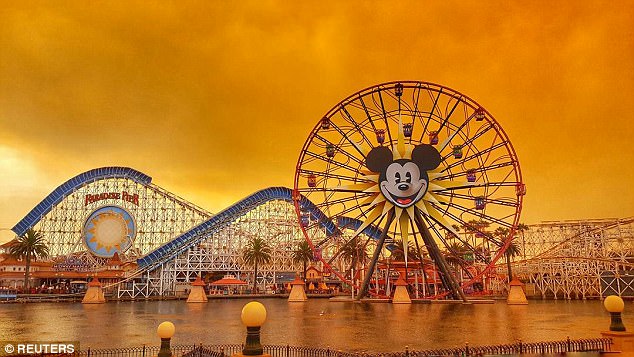 Disneyland is seen as wildfires rage in California, Anaheim, California, U.S. October 9, 2017 in this picture obtained from social media

This environment-centric view of wildfire risk is also evident at the policy level.

In 2015, for example, a major funding package in California for emergency firefighting costs was named the ‘drought package’ as if drought alone was the cause of the problem.

These explanations were also on display after the 1991 Oakland/Berkeley Hills Fire which had – until this October – been the most destructive wildfire in California’s history.

A Federal Emergency Management Agency report, for example, blamed the blaze on ‘record high temperatures well into the 90s’ as well as ‘hot dry winds [that] gusted and swirled through five years of drought-dry brush and groves of freeze damaged Monterey Pines and Eucalyptus groves.’

As these accounts suggest, threatening wildfires are frequently portrayed as a byproduct of warming weather, stubborn high-pressure zones and dry western landscapes.

But what about the institutions, reckless policies and billions of dollars worth of financial incentives that help produce dense human settlements and immense social risks on these landscapes?

Typically absent from the discussion are the powerful social and economic forces that turn historically active fire regimes into a string of deadly and costly wildfire disasters.

Across the Western United States, areas at the wildland urban interface have seen a 300 percent population growth rate in the past 50 years. 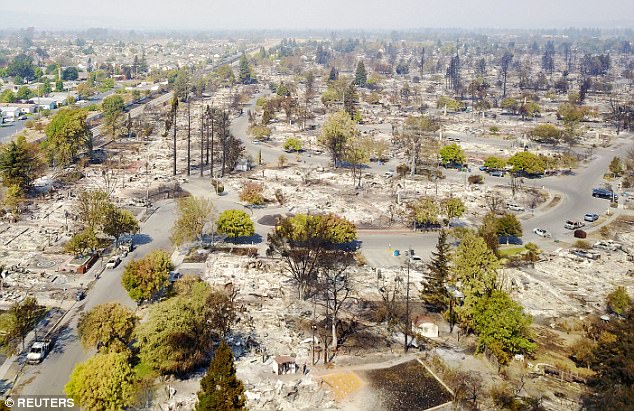 An aerial shows damage caused by wildfires in Santa Rosa, California, U.S October 11, 2017. Picture taken October 11, 2017. According to a researcher at the University of Colorado Denver, the conditions leading to the fire disaster were neither unlucky nor unpreventable

Based on current trends, that number is expected to increase to 54 million by 2022.

The most alarming suburbanization statistic, however, concerns what hasn’t been developed.

As of 2008, only 14 percent of private land in areas at the wildland urban interface of the Western United States had undergone land conversion.

By 2013, this number increased to 16 percent and will continue rising without growth limitation policies in place.

And where new developments do occur, cities should do better to acknowledge their high exposure to fire.

Large swaths of areas impacted by the Wine Country Fires, including the Coffey Park Neighborhood in Santa Rosa and the Rockridge Neighborhood in the Oakland/Berkeley Hills, were not originally zoned as ‘Very High Fire Risk’.

As a result, building codes were lax and did not include fire safe provisions. Moreover, municipal infrastructure such as narrow roads, exposed power lines and inadequate water conveyance systems hindered emergency response activities. 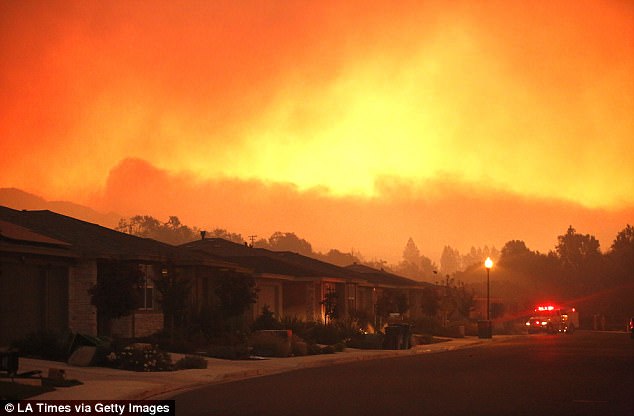 SANTA ROSA, CA – OCTOBER 13, 2017: Fire trucks monitor a fire that threatens the Oakmont community along Highway 12 in Santa Rosa on October 13, 2017. The retirement community had been evacuated on the second day of the Santa Rosa fire

This leads us to a second and more fundamental ‘perfect storm’ problem.

Such language suggests that an unlucky and unpreventable alignment of environmental conditions is always required to make the unthinkable happen.

This is flawed logic.

The conditions leading to the Northern California Wine Country and Oakland/Berkeley Hills fire disasters were neither unlucky nor unpreventable.

And such large fire disasters, while undesirable, should never be viewed as unthinkable.

The truth is, we knew these fires were possible and that there were inherent dangers when these communities were built.

How did we know? The historically active fire regime in California and across the American West stands as a stark and foreboding reminder of these perilous landscapes.

And yet, despite fully comprehending these immense fire risks, cities have continued to plan and extend human settlements further into already fire-prone areas.

And this is on the heels, and sometimes coinciding with, many decades of intentional fire suppression policies which enabled fuel build-up across the Western United States.

As I argue in ‘Flame and Fortune in the American West’, we tend to ignore these seemingly obvious risks because suburban landscapes are decidedly lucrative landscapes.

These are areas that generate high levels of profit and revenue for interested parties near and far.

This includes landholders, property developers, members of the construction industry, and city and county property tax offices, to name but a few.

The recent fires in Northern California were not the result of a perfect storm of unlucky factors or unforeseen conditions.

Quite the contrary we could see these fires and their disastrous outcomes coming decades in advance.

It was only a matter of time.

Rather than pointing to unruly ecological conditions when explaining costly wildfires, we need to recognize the role society’s ravenous appetite to develop historically high-risk areas plays.

Only then can we start to reverse calamitous urban planning trends. 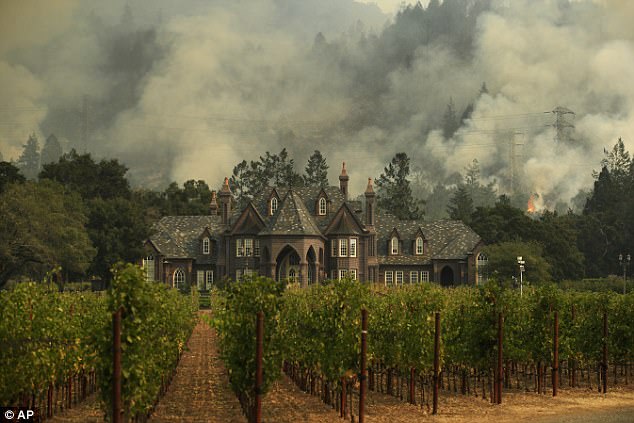 A wildfire burns behind a winery Saturday, Oct. 14, 2017, in Santa Rosa, Calif. Fire crews made progress this week in their efforts to contain the massive wildfires in California wine country, but officials say strong winds are putting their work to the test