This is the moment a lorry driver foolishly attempted to clear a level crossing as the barriers fell, shearing one gate off its hinges.

The footage was shared online by rail operators after the incident caused widespread disruption to trains and road traffic in the area.

Footage shows the the barriers begin to close as the lorry approaches the level crossing. 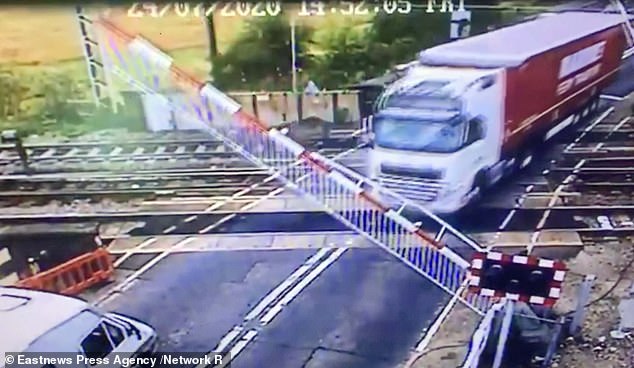 Although the barrier is beginning to lower, the driver speeds up and attempts to clear the crossing 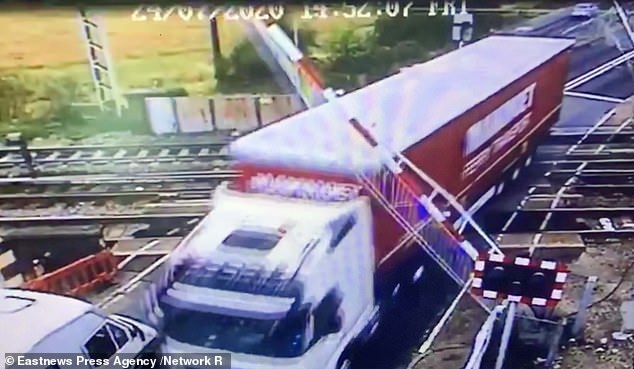 The lorry collides with the gate and rips it off its hinges. Drivers who ignore the laws on level crossings face a £60 fine 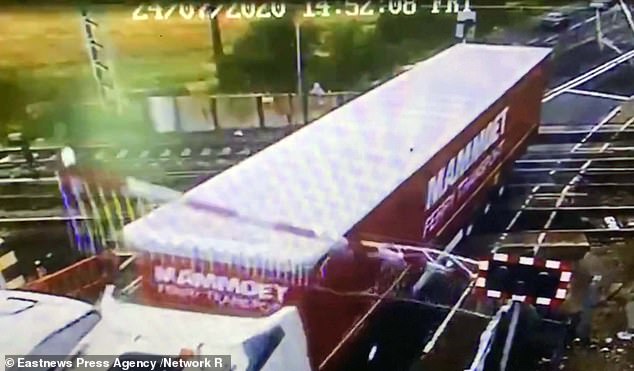 According to the Highway Code for level crossings:

Instead of slowing down at the red light, the lorry driver takes a gamble and speeds up through the closing barriers.

A large bang can be heard as the lorry collides with the far gate and rips it off its hinges.

The drama unfolded near Manningtree Station, just before 3pm, with a road closed until 6.45pm whilst the barrier was repaired.

A spokesman for Network Rail said: ‘I apologise to those affected and understand how frustrating this disruption is, especially as we approach home time on a Friday.

‘It is vital that we make the level crossing safe for everyone before re-opening the road.’

Both barriers had to be fixed and one was pulled from its hinges after being hit by the Mammoet ferry transport lorry.

After the video was released by Network Rail, locals called on police to take action and slammed the driver.

To improve safety and catch motorists who break the law, cameras are installed at level crossings across the UK aimed at catching drivers who jump the red light.

Drivers like this one who ignore the red light and break the law face a £60 fine and penalty points on their licence.

However, if the police deem the driving offence to be more serious, they could be taken to court and face far more serious punishments.