Recruit for Spouses: Mother leads fight to get military wives into jobs

‘Military wives’ club has been life changing for me’: The mother of two leading the fight to get more Army spouses into jobs

As Armistice Day approaches, Britons will be reminded once again of just how much our troops sacrifice on a daily basis.

But less obvious are those that military spouses have to make, often leaving behind their families, friends and any chance of a career in order to follow their partner around the world.

When Heledd Kendrick married in 2009, she was blissfully unaware that her husband’s job in the Army would cost her a career she loved.

Jobs offensive: Heledd Kendrick set up Recruit for Spouses after struggling to find work as an Army wife

She had worked as the editor of a horse racing magazine, a position she gave up when she moved to join him in military accommodation in Surrey.

Keen to slip into a new job, and taking all the opportunities she could, Kendrick quickly found herself in front of an interviewer for an administrative role.

But as the interview progressed, she began to realise that being an exemplary candidate was no longer good enough.

‘The interviewer noticed where I lived and they asked me if my husband was in the military.

I said yes, and they said: ‘Oh, that means you’ll be moving on soon,’ she explains. Just like that, her credentials were dismissed.

‘I was totally shocked,’ Kendrick says. ‘I went back home and was talking to other spouses about it and they said: “Yeah, you might as well forget about your career now.” ‘

But Kendrick was young and ambitious. Rather than give up, she decided to set up the organisation she wished had existed to help her.

And so in 2011, Recruit for Spouses was born. It has helped 5,500 partners of military workers – mostly wives – into jobs around the country.

‘There are trained barristers stacking shelves in Tesco because it’s the only job they can find, and the country is missing out on all this talent,’ says Kendrick, 48.

‘Our business has got spouses working who haven’t had a job in five years. We had a woman who used to manage David Beckham’s affairs who couldn’t find work, scientists, doctors, lawyers who subjugate their career to follow their partners.’

‘It has been life changing for me’ 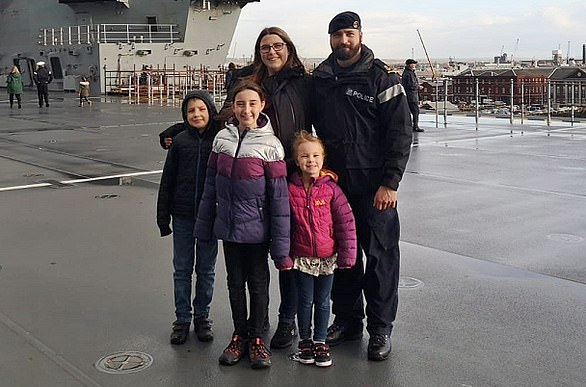 The crew: Hannah with her Navy serviceman husband Joe and three of their children

When Hannah Barnard, 32, had to give up her banking job to relocate with husband Joe, who was in the Navy, she was hopeful she would soon find a new role.

However, she says: ‘I was lucky if I got an interview, only to be turned down in favour of someone who was less experienced and “not married to someone in the military”.’

After being turned down hundreds of times, she planned to retrain as a midwife – something she had always dreamed of doing. But the mother of four was forced to turn down her place at university because her husband was leaving on a ten-month long sea draft.

‘I was devastated, it affected my mental health and I was at a really low point,’ she said. But she found Recruit for Spouses, was put on a coaching programme and was hired on to the Virgin Red team. ‘It has been life-changing for me,’ she said.

Most of the jobs which Recruit for Spouses match people with can be performed remotely, meaning military wives and husbands are still free to follow their other half around the world and can even pick up the childcare responsibilities they are left to handle.

Kendrick says these opportunities have shot up since the pandemic began, as more and more businesses are realising that home-working can be a useful tool.

‘We’ve got spouses working in Texas, Jordan, Italy and France, and we’ve got a community of 30,000 followers,’ Kendrick explained.

One company to recognise the talent in this pool of keen workers is Virgin Red, the soon-to-be-launched loyalty app for the Virgin group of companies.

Virgin Red has taken on around 20 spouses, all working remotely, to man its customer services team.

Kelly Best, chief marketing officer for Virgin Red, says: ‘The spouses are really an exceptional group – a pool of talent we are thrilled to be working with as we embark on this journey.’

Kendrick doesn’t shy away from how hard it has been for herself and others like her to forge a career which can complement their partner’s.

But with her business, she hopes no woman will ever have to give up their chance to work in a fulfilling job just because of who they marry.