Recruitment manager, 33, filmed himself raping a baby in his secret double life as paedophile called The Devil while posing as perfect husband

A man who filmed himself raping a baby before sharing it online was sentenced to 18 years in prison on Monday.

Barry Hudson-Muscroft from Prestwich, Manchester held a secret double life as a predatory sex offender which he kept hidden from his wife of 16 years.

The 33-year-old recruitment manager, who had previously worked in the hospitality industry, pleaded guilty to two offences of raping a child at Minshull Street Crown Court before his sentencing.

Barry Hudson-Muscroft, 33, (pictured) was jailed for 18 years in prison after pleading guilty to two offences of raping a child and admitted to three offences each of making indecent photos, possession of indecent photos and sexual touching

After an examination of Hudson-Muscroft’s phone, it was discovered he was in the possession of around 5000 indecent images of young children from Britain and America downloaded onto his device and had been communicating with minors as young as 12.

On one occasion, the Manchester resident filmed himself raping a baby before sharing it on a paedophile group named ‘Share Bears (No Limits)’, using the username ‘Diablo-1987’.

Hudson-Muscroft admitted that he took pleasure from abusing babies as they ‘couldn’t talk’ while he also confessed to being interested in both guys and girls between the ages of 0 and 15.

The paedophile was caught after an undercover US deputy sheriff informed the FBI of Hudson-Muscroft’s crimes and British detectives arrested the 33-year-old in his Manchester home. 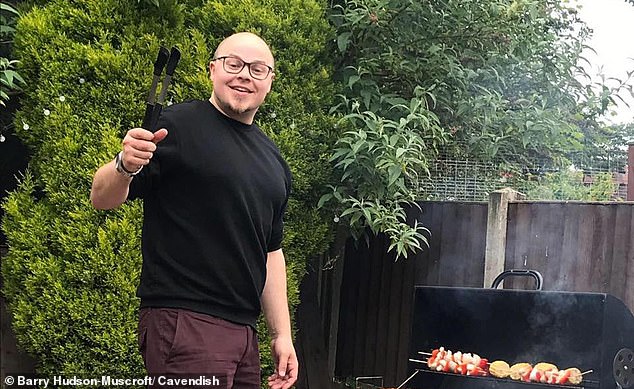 Hudson-Moscroft, who had a wife of 16 years, even admitted to raping a baby – a crime which he filmed and shared to 37 people in a paedophile group chat, under the username ‘Diablo-1987’. He was caught after an undercover US deputy sheriff exposed his crimes to the FBI

His indecent activity was not known by his wife, family or friends.

Mr Alaric Bassano, prosecuting, said: ‘His wife, with whom he had been in a relationship for 16 years – 10 years living together and married for two and a half years – described their relationship as a normal, happy one without any problems at all.

‘She viewed him as loving and caring but the reality was somewhat different.

‘He joined a paedophile sharing group and the evidence reveals serious depravity on his part and offending of the utmost gravity.

‘In one online conversation the defendant quipped that it was expedient for him to have a victim who was unable to talk and offered to further abuse the child in a manner specified by the other person in return for like images, effectively inciting child abuse abroad.

‘Unfortunately for him one of the people he was communicating with was an undercover Deputy Sheriff in USA.’ 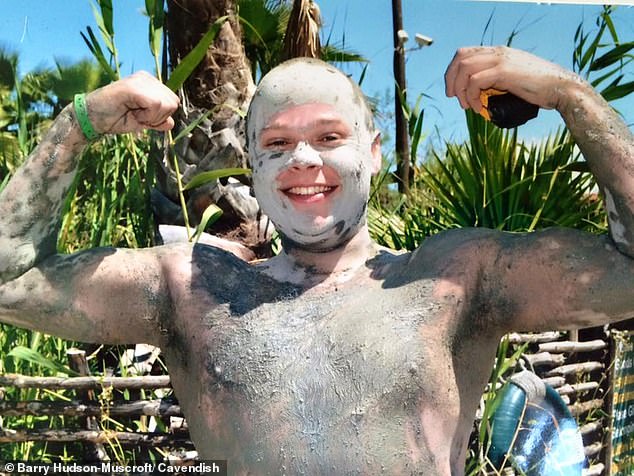 Hudson-Muscroft, who worked as a recruitment manager after several years in the hospitality industry, admitted he enjoyed abusing babies as they ‘couldn’t talk’ and admitted to enjoying sexual content among young children aged 0 to 15

Hudson-Moscroft’s lawyer, Mark Friend, said his client admits there are ‘very significant issues he must deal with’ and described him as a ‘hard-working man living a dual life’.

Sentencing Judge Maurice Greene told Hudson-Muscroft: ‘You had entrenched feelings of sexual attraction toward young children and the offences you committed can only be described as plumbing the depths of depravity.

‘You present a serious risk of harm to children. You were part of a paedophile sharing group and there is a pattern of depraved sexual offending over a number of years.’

Hudson-Moscroft will be on licence until 2044 under the terms of an extended sentence and was ordered to sign the Sex Offenders Register.

He was also given a restraining order and is banned from contacting his wife.