Lewis Bertram (pictured) stacked up 2,500 tonnes of mattresses in his two units

A rogue recycling boss has been fined again for refusing to remove a mattress mountain – after he piled more than 10,000 beds in a business park.

Lewis Bertram stacked up 2,500 tons worth of mattresses – the same as more than 350 elephants – in his two units because he was experiencing ‘absolute hell’ with a troublesome family member.

The case was part of the Environment Agency’s prosecution against Bertram between December 2014 and June 10 2015, which was heard at Canterbury Crown Court in January.

Bertram, who was trading as Eco Matters at Smarden Business Estate, in Kent, has been ordered to pay a further £15,000, plus £1,400 in costs at Canterbury Magistrates’ Court after already receiving punishments earlier this year.

Following the crown court trial, Bertram was found guilty and handed two six-month sentences, suspended for a year, 300 hours of unpaid work and ordered to pay £6,000 costs to the Environment Agency.

This latest hearing was in relation to two further charges, both for non-compliance with two notices to remove the illegally deposited waste, which could not be heard in January. 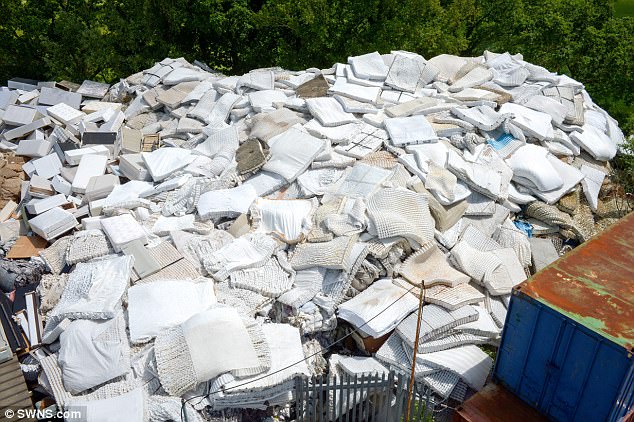 Bertram piled more than 10,000 beds in a business park because he was experiencing ‘absolute hell’ with a troublesome family member

Alan Cansdale from the Environment Agency said: ‘His actions showed disregard for local residents and businesses, and put the environment and local amenity at risk.

‘He hasn’t cleared the site, so we are using our enforcement powers that require the landowner to clear the site by November.

‘While we will work with businesses to help them operate within the law, in cases where individuals consistently fail to comply we have no hesitation in prosecuting them.’