Tommy Cooper used to be a heavyweight boxer in the Army. ‘I spent so much time with my nose on the canvas they called me Rembrandt,’ he joked.

A few artist gags wouldn’t go amiss in this sombre play about Mark Rothko, the great American abstract artist seen here in the late Fifties preparing a set of murals for a pricey new restaurant in New York.

Alfred Molina, head shaven totally bald, plays the grumpy, bullish artist in specs whose mantra is seriousness. It is his new assistant Ken’s job to listen to him, mix the paints and fetch the Chinese takeaway. 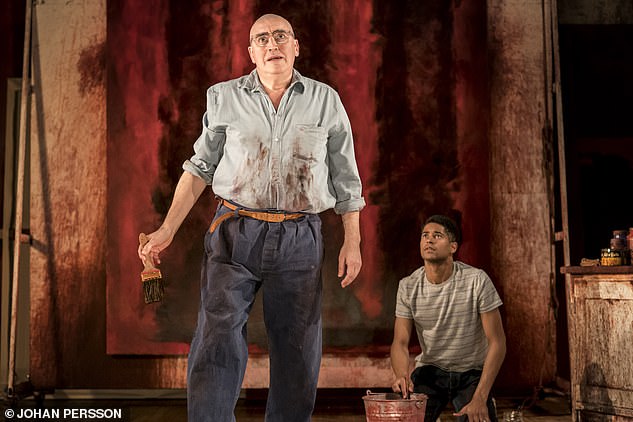 In the role as workshop skivvy is Alfred Enoch, giving a lovely open-faced performance of non-confrontational calm. So when he finally turns on his impossible master, it’s all the more effective.

Rothko didn’t do modesty. ‘There’s tragedy in every brush stroke,’ he says in full Anguished Artist mode. How you wish this insufferable egotist would put a sock in it as he sprinkles about the names of philosophers and great artists (like him).

It’s when the pair get down to work that the evening comes fully alive. There’s a terrific scene when they prime, at high speed, a big canvas from a bucket of red paint. The two end up exhausted on the floor, looking like bloodspattered axe murderers.

John Logan wrote the edge-of-your-seat film Gladiator, but in this wordy play of his there’s a lot of listening to Rothko to be done – often while watching paint dry.

Red’s compensating reward is two smashing performances in a show directed by Michael Grandage and designed by Christopher Oram with enormous care and skill. Whether this rather chuntering play deserves such loving attention is another matter.

Seven circus artists perform in, on and around five old-fashioned bathtubs on a stage frequently awash with water, but there’s no need for ‘Slippery When Wet’ signs in this frothy spectacular.

Melding acrobatics, gymnastics, dance, opera, clowning and juggling, the German troupe dishes out imaginative updates on circus staples, with the neat trick of lending everything an aquatic theme. At times they’re caught between wanting to turn up the raunch dial yet needing to keep it family-clean for an early-evening slot.

But their capacity to surprise irons out any inconsistencies. A bathroom symphony of drinking, gargling, spitting and brushing is typical of Soap’s inventive comedy. And if you’re bored of juggling, you haven’t seen Vanessa Alvarez on her back spinning four large towels, or tossing a guitar around with her feet.

Strangely, there’s no soap in Soap. Was it a typo and they meant to call it Soak? Quite possibly if the front rows in the wet zone are anything to go by.

Either way, it’s a splish-splash smash for the summer.

The Be All And End All

This is a play about helicopter parenting – mums and dads who hover over their children, determined to make sure they succeed.

Mark is a rising MP, Charlotte is his publishing exec wife. It’s A-level time and they are both nervous wrecks.

They’ve spent a mind-bending £650,000 on their son Tom’s education. But he needs A* grades for Cambridge – and failure looms. 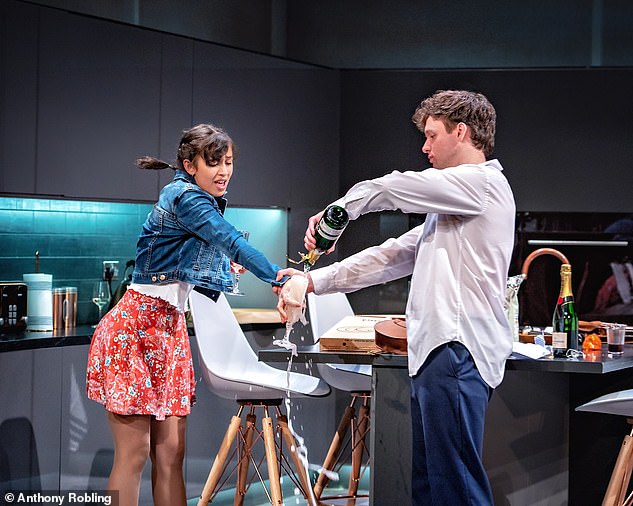 I found myself chuckling freely at the spiral of parental deceit and youthful rebellion. Above: Matt Whitchurch as Tom and Robyn Cara as Frida

Despite some sermonising about the psychological and moral cost of educational privilege, essentially this is a juicy comedy of moral corruption and total family meltdown.

Tom’s dad (nicely performed by the play’s author, Jonathan Guy Lewis) is a jokey wag who exudes entitlement. Imogen Stubbs is both syrupy and manipulative as the mother. Matt Whitchurch is all too plausible as their exasperated, fragile son, with Robyn Cara as his cruelly compromised girlfriend Frida.

I found myself chuckling freely at the spiral of parental deceit and youthful rebellion. If you have a sarky teenager at home, take them to this. They might harrumph but you’ll love it.

‘The Be All And End All’ is at the Mercury Theatre, Colchester, Tue-Sat, and the Theatre Royal, Windsor, May 28-Jun 2

US writer Rajiv Joseph’s play is a semi-fictional, semi-comic navigation through the lies and realities of Soviet history, starting in 1920 with the great writer Isaac Babel’s reports from Poland. 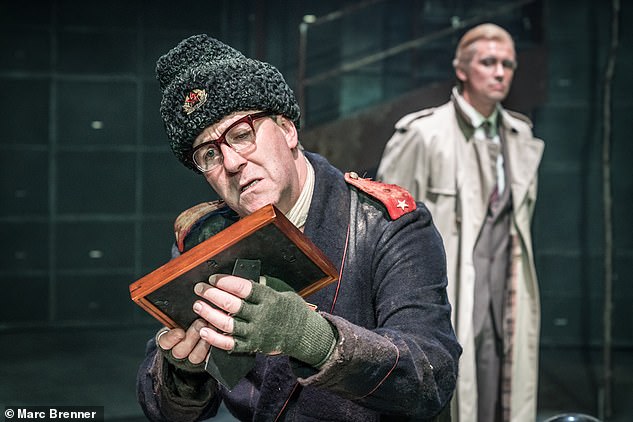 US writer Rajiv Joseph’s play is a semi-fictional, semi-comic navigation through the lies and realities of Soviet history. Above: David Birrell and Steve John Shepherd

Then there are the Thirties purges, orchestrated by the repulsive Yezhov (David Birrell, excellent), whose wife had an affair with Babel (Ben Caplan). In 1940 the policeman and writer become executioner and victim.

Yezhov was in turn tortured to death by Stalin. But the play lets him live on as an old comptroller of the KGB, dispatching a young Putinesque agent to East Germany to spy on Babel’s (imaginary) granddaughter.

Our post-truth world has its origins in the horrors of the Soviet experiment. A shame this ambitious, fantastical but rambling affair doesn’t quite suck you in.