BOSTON (AP) – The Boston Red Sox once again failed to clinch the AL East, losing 3-2 to Alex Bregman and the Houston Astros on Friday night.

The magic number for the Red Sox remained at one. Boston leads the New York Yankees by two games – both teams have two games left and they are each assured playoff spots.

If Boston and New York wind up even, they will play a one-game tiebreaker Monday at Yankee Stadium for the division crown, with the loser going to the wild-card game.

Boston Red Sox’s Rafael Devers sits in the dugout after grounding out to end a baseball game against the Houston Astros at Fenway Park in Boston, Friday, Sept. 29, 2017. The Astros won 3-2. (AP Photo/Charles Krupa)

Bregman homered and drove in three runs for Houston, which reached 100 wins for the second time in team history. Charlie Morton (14-7) pitched into the sixth inning, and Ken Giles got three outs for his 34th save.

DENVER (AP) – Nolan Arenado hit the first of Colorado’s four homers, and Chad Bettis picked up his second win since his return from testicular cancer.

The Rockies have two games remaining and hold a two-game lead over Milwaukee for the second NL wild card.

The Brewers entered two games behind the Rockies for the second NL wild card. Milwaukee has won four of its last six games.

Anderson (12-4) allowed one run and three hits in his fourth win in his last five starts.

Eduardo Escobar also homered and drove in three runs, helping the Twins bail Kyle Gibson out of a 3-0 deficit after an RBI triple by Alex Presley and a two-run home run by Nicholas Castellanos.

Gibson was removed after 4 2/3 innings, so Jose Berrios (14-8) was credited with the win after recording four outs in a tune-up relief outing. Matt Belisle notched his ninth save with a perfect ninth inning for the Twins, who will visit New York or Boston on Tuesday in the AL wild-card game.

NEW YORK (AP) – Masahiro Tanaka struck out 15 over seven innings, his highest total since coming to the major leagues, and the playoff-bound Yankees won for the fourth time in five games.

Tanaka (13-12) retired his first 14 batters before Ezequiel Carerra reached on an infield single up the middle. Aroldis Chapman worked the ninth for his 21st save in 25 chances.

Greg Bird had two hits and two RBIs for New York, and Aaron Judge also drove in a run.

Marcell Ozuna drove in three runs for Miami, which trailed 5-0 heading into the sixth inning. Adam Conley (8-8) pitched a scoreless seventh for the win, and Brad Ziegler got two outs for his 10th save.

The Marlins scored four times in the seventh. Justin Bour’s two-run single gave Miami a 6-5 lead. The Marlins also got run-scoring singles from Ozuna and Stanton off Dan Winkler (0-1).

CHICAGO (AP) – Ian Happ hit a three-run homer with two outs in the eighth inning, and the Cubs won for the 14th time in 17 games.

With a second straight NL Central title in hand and their sights set on another World Series championship, the Cubs held sluggers Anthony Rizzo and Kris Bryant out of the lineup.

Trailing 4-2 in the eighth, Tommy La Stella started the rally with a one-out single against Amir Garrett. Taylor Davis then singled to third off Michael Lorenzen (8-4). After Kyle Schwarber struck out, Happ drove his 24th homer to left.

Brian Duensing (1-1) pitched a scoreless eighth. Justin Grimm worked the ninth for his first save in three chances.

Zimmerman hit a two-run homer in the sixth and a solo shot in the eighth for the NL East champions. It was his seventh multihomer game of the season.

Cleveland maintained its one-game lead over Houston for the best record in the AL with two games remaining. The top seed will play the winner of the wild-card game between the Yankees and Twins in the Division Series.

The Indians’ 101 victories are the second-most in franchise history and set a record for wins by an AL Central team.

Cleveland built a 10-0 lead after three innings, aided by six walks from Mike Pelfrey (3-12) and an error by shortstop Tim Anderson.

Kennedy (5-13) snapped a franchise record of 18 winless home starts, holding the postseason-bound Diamondbacks to one run in five innings. It was his first Kauffman Stadium victory since Aug. 20, 2016.

Jake Lamb hit his 30th homer in the second for Arizona. Zack Greinke (17-7) allowed two runs in four-plus innings in his final tuneup before starting the wild-card game Wednesday in Phoenix against Colorado or Milwaukee.

Rangers left-hander Martin Perez (13-12) allowed three runs in six-plus innings. The 13 wins are a career high for Perez and the loss guaranteed Oakland would finish last in the AL West.

A’s catcher Bruce Maxwell took a knee during the national anthem and was booed by a portion of the crowd before and after the song. It was the first time Maxwell has taken a knee on the field in an opposing ballpark.

Alex Claudio worked a scoreless ninth for his 11th save.

Longoria hit a leadoff drive in the fifth against Wade Miley (8-15), marking Longoria’s fifth straight 20-homer season and the ninth of his 10-year career.

Morrison hit his 38th homer off Chris Tillman in the seventh.

Rays starter Jake Odorizzi left his final start of the season after four innings with a sore right knee. Brad Boxberger (4-4) got the win.

Earlier in the day, the Phillies (65-95) announced manager Pete Mackanin would not return to the dugout in 2018. Mackanin was given a role as a senior adviser to general manager Matt Klentak.

Joe Panik added a run-scoring double among his four hits to back Chris Stratton (4-4). The Giants needed one victory in the final series of the season to avoid their first 100-loss year since 1985.

Luis Valbuena had a two-run, pinch-hit double to cap a four-run comeback in the eighth inning.

Blake Wood (2-0) pitched the eighth to earn the win and Blake Parker got his eighth save.

Marc Rzepczynski (2-2) was the losing pitcher. 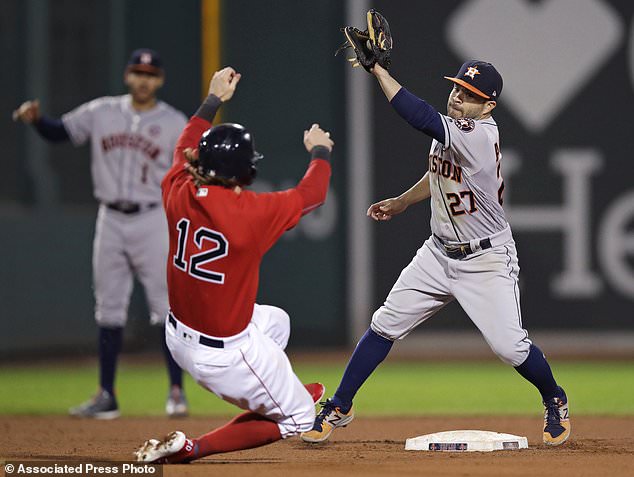 Houston Astros second baseman Jose Altuve (27) catches the throw as he sets to tag out Boston Red Sox’s Brock Holt on an attempted to steal second during the eighth inning of a baseball game at Fenway Park in Boston, Friday, Sept. 29, 2017. The Red Sox challenged the play, but the original call was upheld. (AP Photo/Charles Krupa)