For fourth time since 2004 the Boston Red Sox are celebrating a World Series title by boarding Duck Boats and traveling through the city streets.

The parade began at 11am Wednesday outside Fenway Park when players, coaches and team officials climbed aboard amphibious Duck Boats.

From there the party moved from Lansdowne Street, before traveling down Boylston, Tremont Street, and Cambridge Street and ending at Government Center, where City Hall sits.

During a pre-parade ceremony at Fenway, Red Sox manager Alex Cora thanked fans for supporting the team during what he called a ‘historic season,’ in which the team won a team record 108 games during the regular season before beating the Yankees, Astros and Dodgers in the playoffs.

‘I’ve been saying since Day One, this is crazy, this is madness,’ said Cora, adding that his players shared the same high expectations of Boston fans.

Police said security will be tight with no public drinking allowed. Fans were asked not to bring in large items such as backpacks, coolers and strollers.

Despite the BPD warnings, a fan reportedly tossed a full can of beer at one of the boats, and it struck and slightly damaged a World Series trophy.

The parade included confetti canons, red, white and blue confetti, a large placards of players’ faces, to help fans identify who was on each Duck Boat.

Confetti cannons are booming in Boston as huge crowds cheer the Red Sox and their World Series title.

Fans were decked out in Red Sox gear, and many made anti-Yankees chants, reflecting the fierce and long-running sports rivalry between Boston and New York. 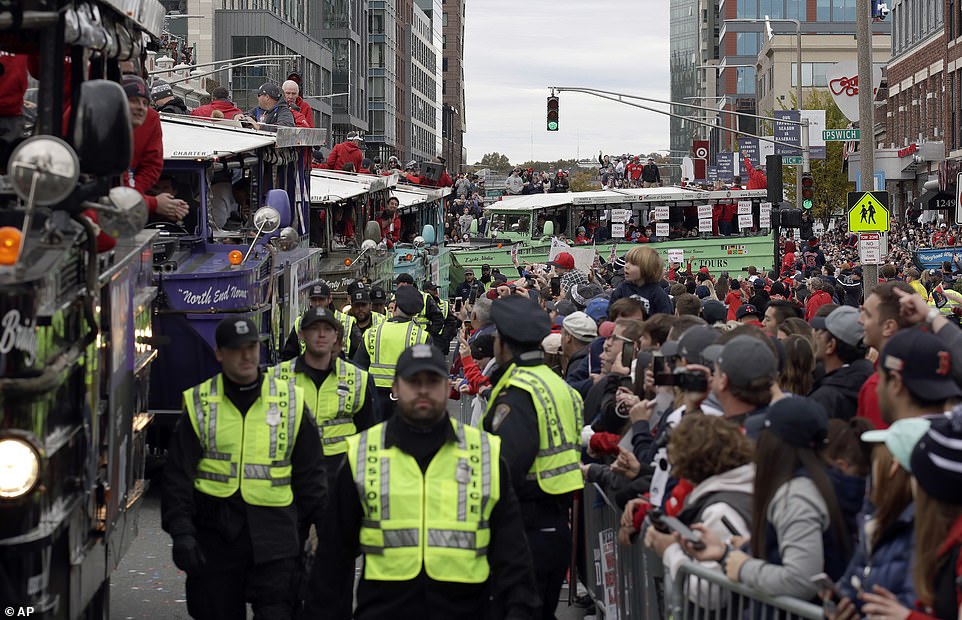 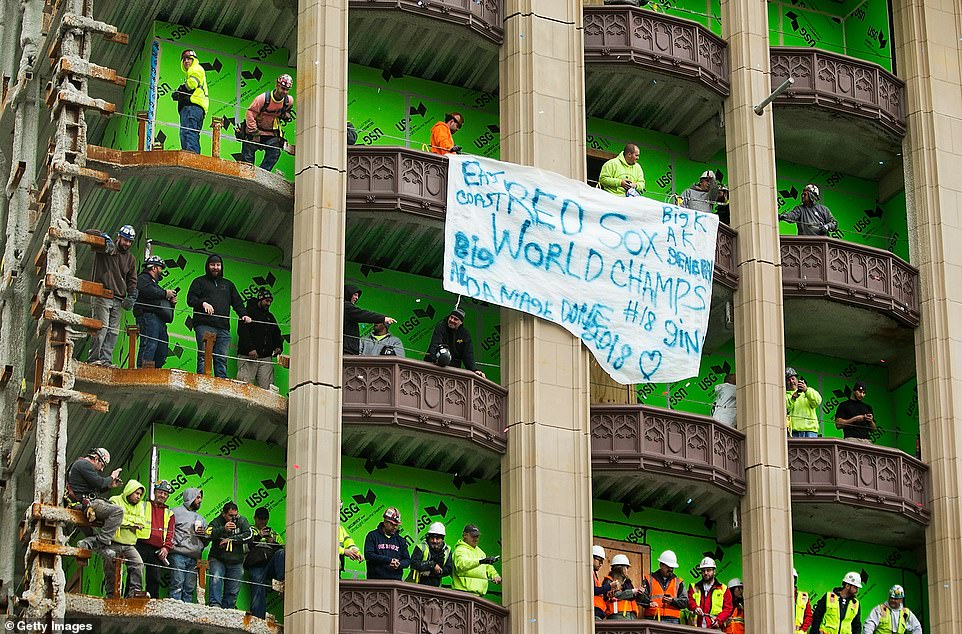 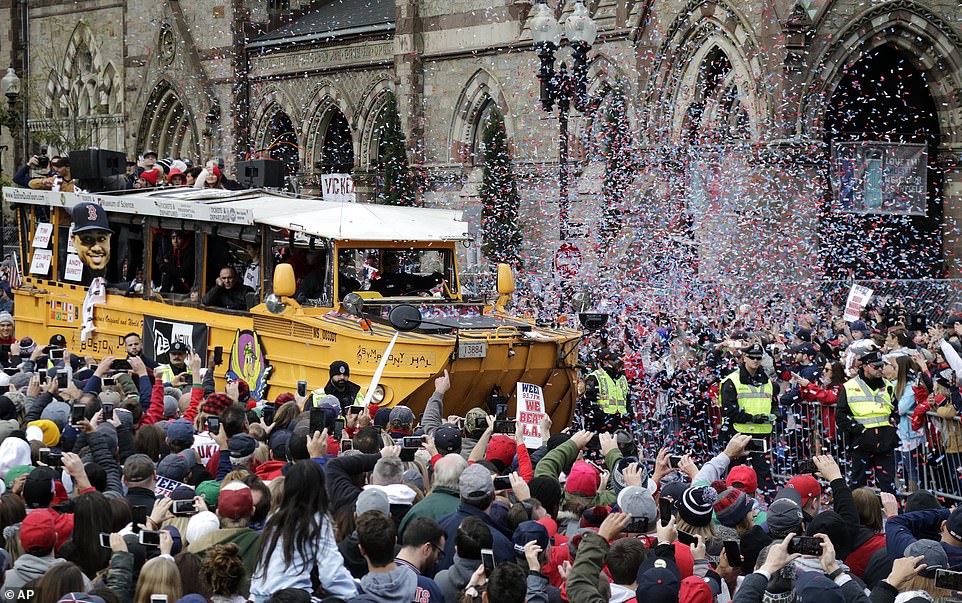 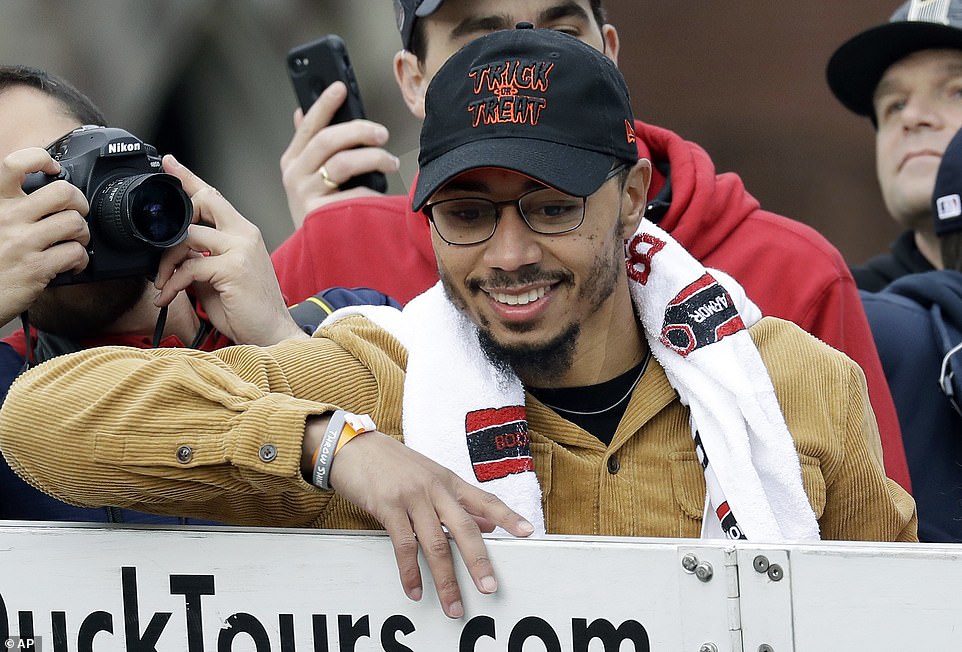 Mookie Betts smiles for the fans during the parade. Betts is considered a favorite to win the American League MVP award 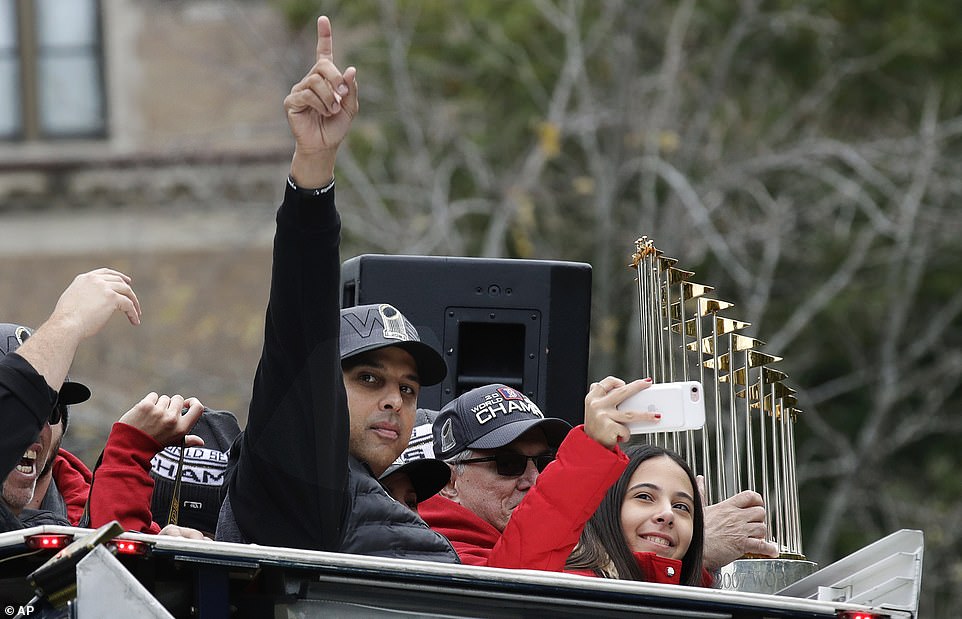 Manager Alex Cora pictured near the World Series trophy. Police said security will be tight with no public drinking allowed. Fans were asked not to bring in large items such as backpacks, coolers and strollers. Despite the BPD warnings, a fan reportedly tossed a full can of beer at one of the boats, and it struck and slightly damaged a World Series trophy 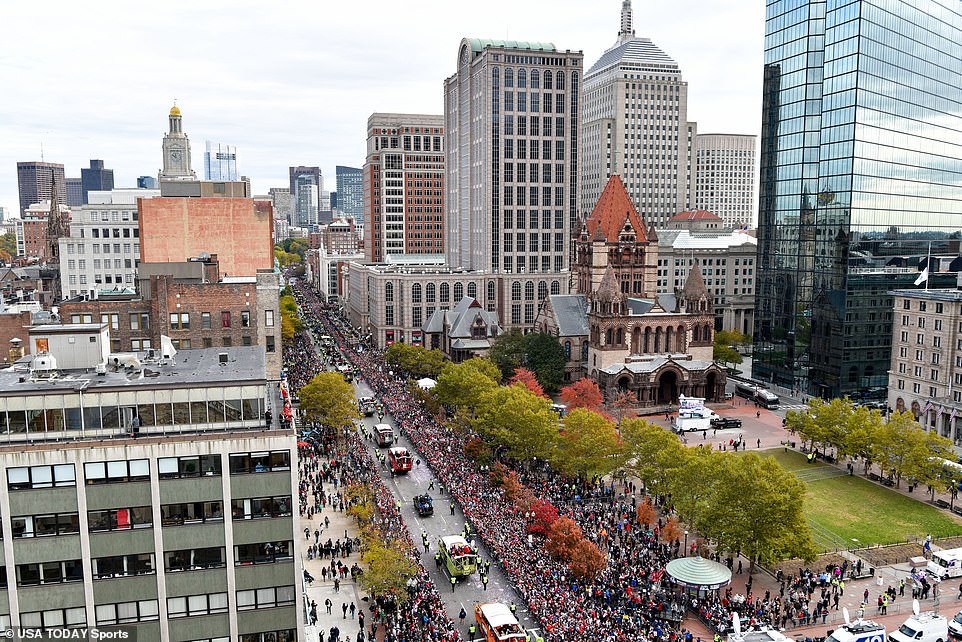 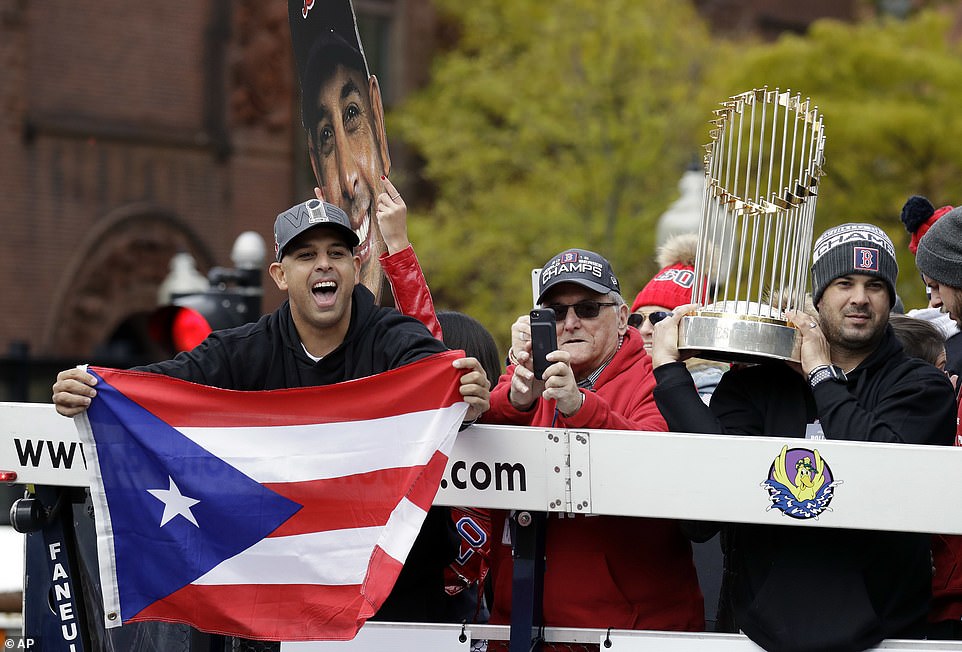 A native of Puerto Rico, manager Alex Cora proudly waved the flag during the parade 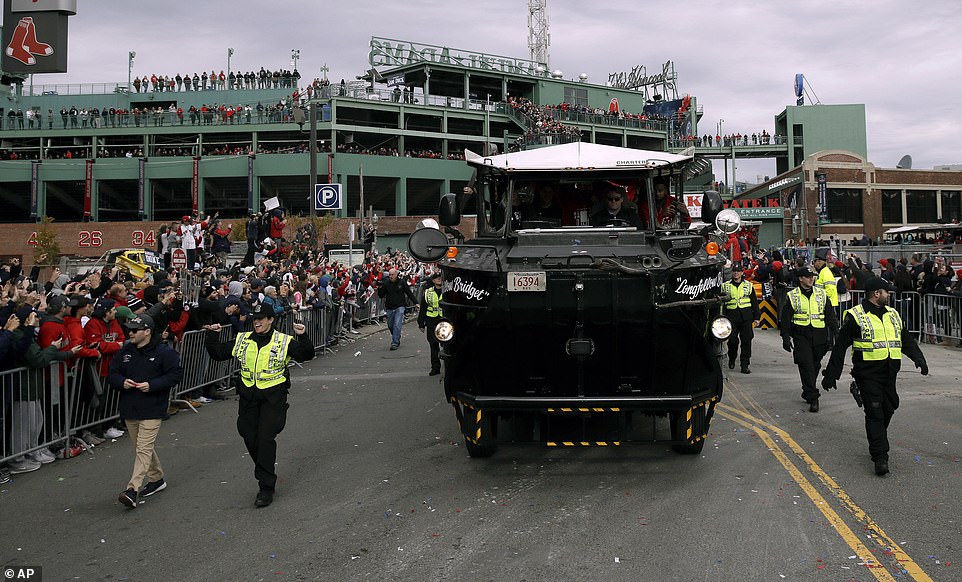 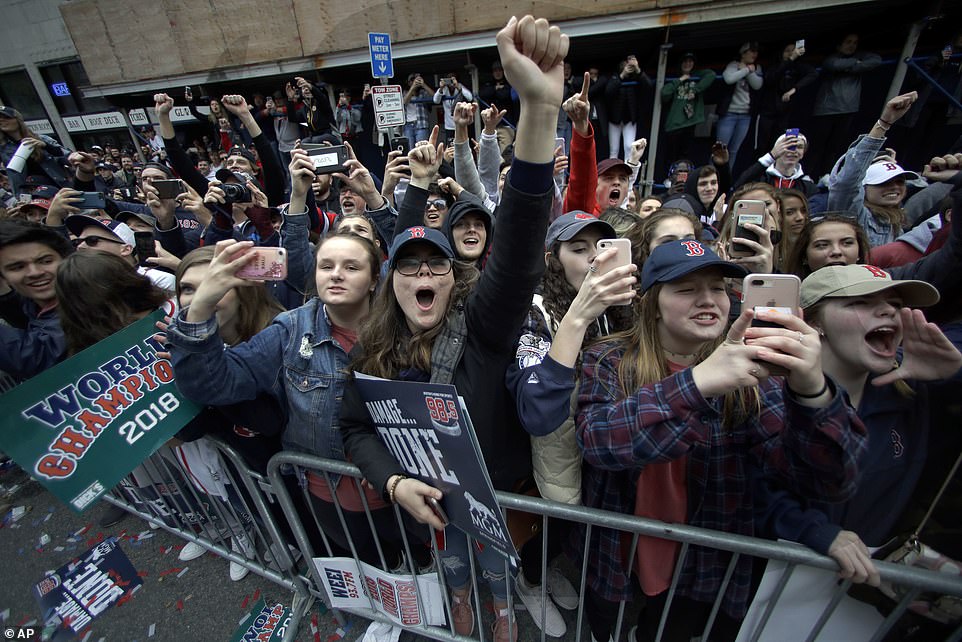 Boston residents have celebrated a dozen major sports titles since 2002, when the Patriots unexpectedly won a Super Bowl 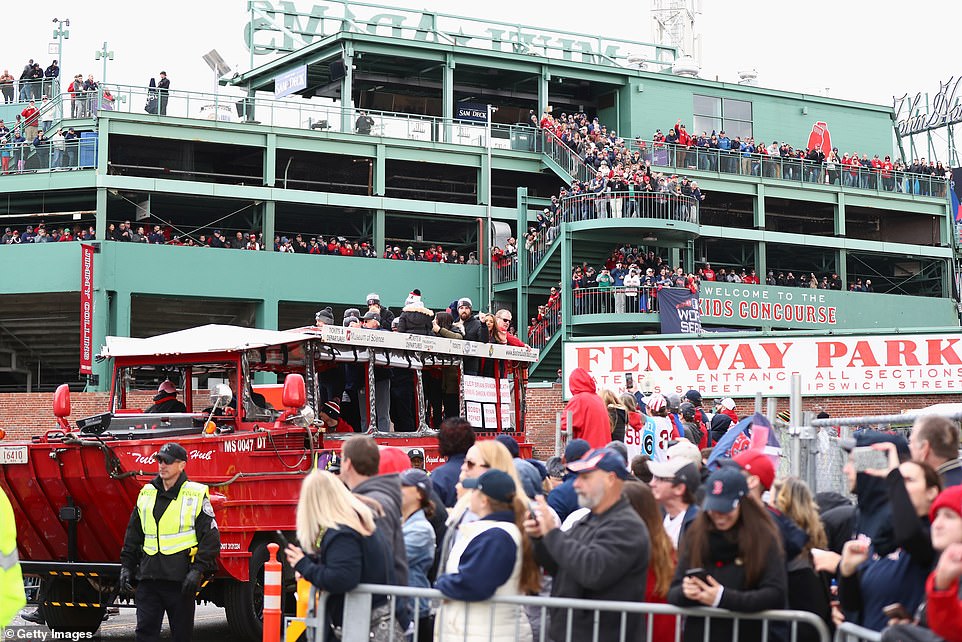 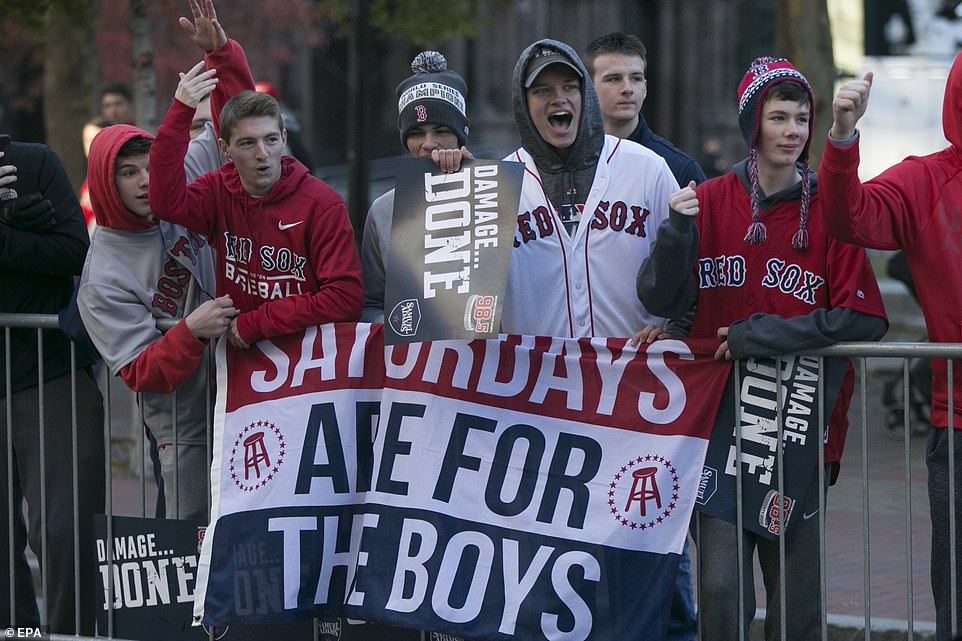 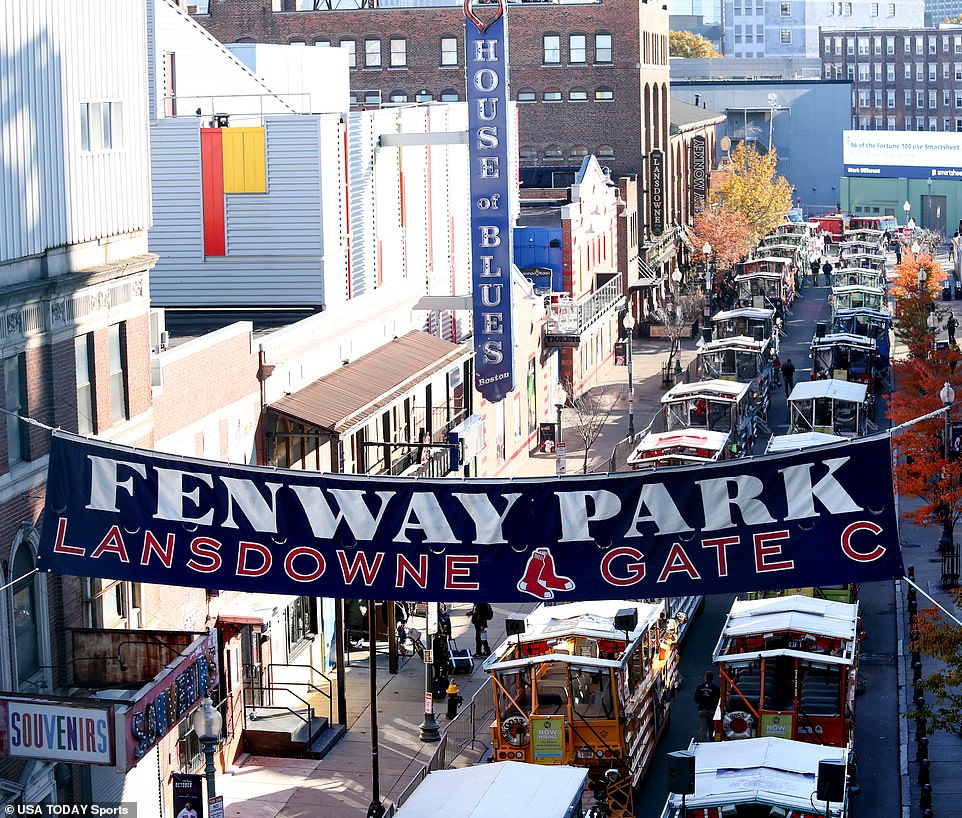 ‘And that’s why they are world champs,’ he said.

Noting the often fickle nature of fans, Cora joked that some might have been ready to have him fired when the team was down 4-0 in the 7th inning of Game 4 of the World Series, with the Dodgers seemingly on the verge of evening the series at that point. But the Red Sox rallied to win that game and wrapped up the title the following night.

Max Colognesi, 16, was one of countless Boston-area students who skipped class to take in the parade.

‘Everyone is here. It’s awesome,’ said the youth, who was wearing a jersey of Red Sox star Mookie Betts as he stood near the ballpark. ‘I have a lot of work to get back to when I get home, but it’s worth it.’

Mayor Marty Walsh said he had confidence in security plans in place for the parade.

‘If you see something out of the ordinary, let us know,’ Walsh advised fans during an interview with New England Cable News.

Jarrick Fidalgo, of New Bedford, Massachusetts, was one of many taking advantage of the fact that the parade fell on Halloween. Wearing a Red Sox jersey and ski hat, he was at his first championship parade with his face painted up like the Joker from ‘Batman.’

‘It’s been nothing but love,’ he said. ‘We’re out here having a good time. We’re turning it up, but of course everybody’s got to stay safe.’ 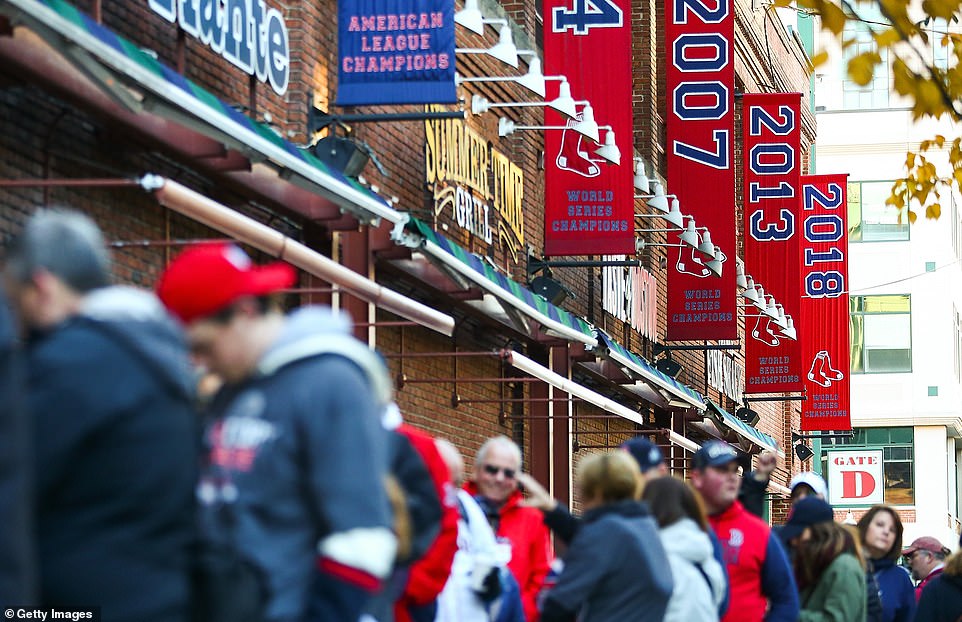 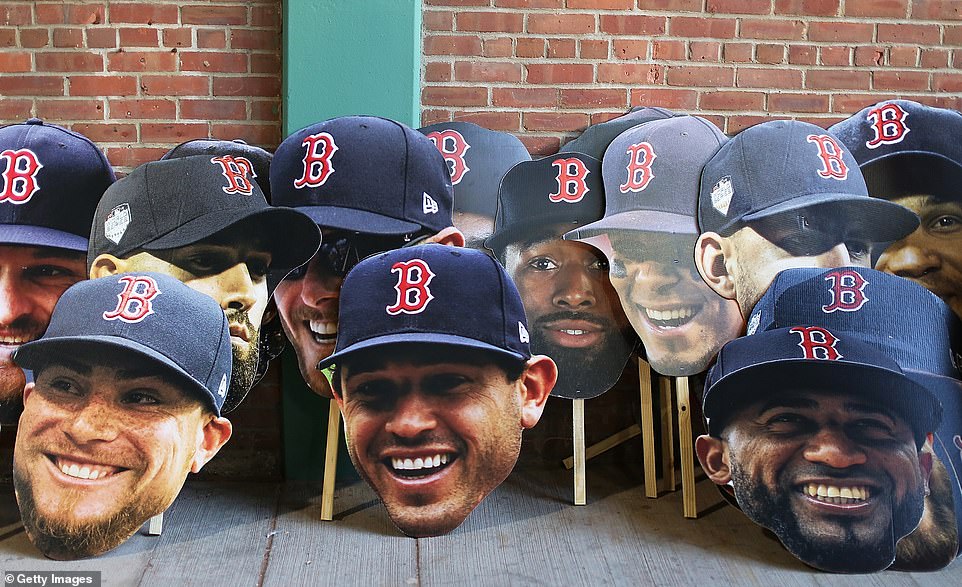 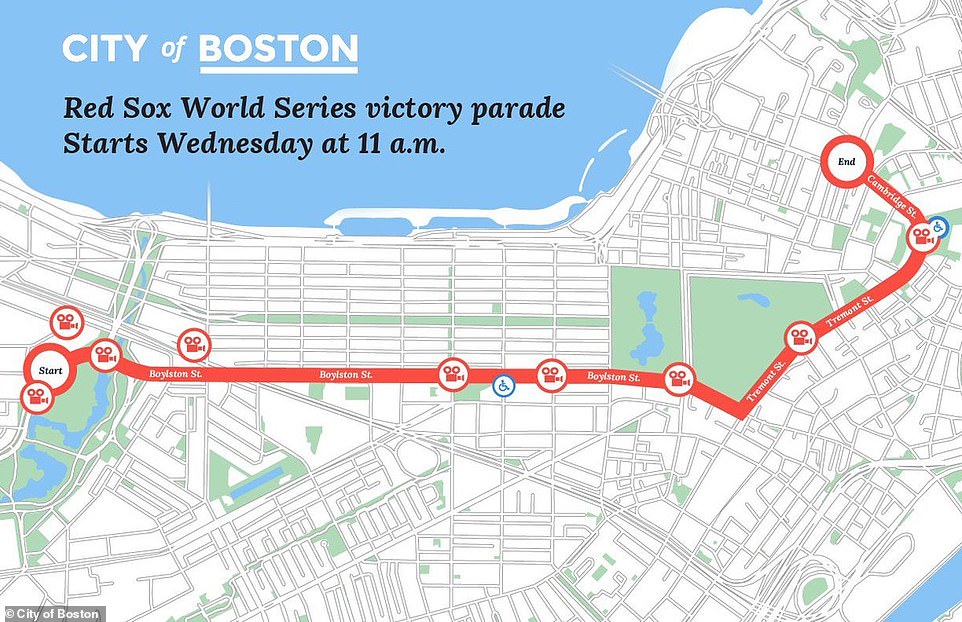 Since the Patriots upset the St. Louis Rams in Super Bowl XXXVI, the formerly hapless Boston teams have enjoyed a nearly two decades of success.

Not only have the four franchises won a combined 12 titles, but the Red Sox ended an 86-year title drought in 2004 by sweeping the St. Louis Cardinals in the World Series.

While it may have been a great World Series for Boston, the same could not be said for Fox.

The Red Sox’ five-game victory over the Los Angeles Dodgers averaged 14.1 million viewers, the Nielsen company said. That’s sharply down from the 2017 Fall Classic, which averaged 18.9 million viewers for the Houston Astros’ seven-game triumph over the Dodgers.

The ratings drop likely had more to do with the length of the series than the matchup. World Series games tend to draw in more viewers as the series goes longer, and the broadcasting network usually hits the jackpot if it goes a full seven games – like last year’s series.

The most-watched game this year was the clinching fifth game on Sunday night, which was seen by 17.6 million people and was the most-watched program on television last week.

It had the lowest viewership since the 2014 World Series between Kansas City and San Francisco.

On Monday, a caravan of buses carrying players arrived at Fenway, less than 24 hours after the Red Sox beat the Los Angeles Dodgers 5-1 to win the World Series.

A couple hundred fans and about a half-dozen TV cameras were waiting for the team.

Fans started cheering when the buses arrived and roared when catcher Christian Vazquez got off the second bus holding the trophy.

Manager Alex Cora got off the first bus and held his index finger aloft to acknowledge the crowd. The players grabbed their luggage and left in their vehicles – with Brock Holt tooting his horn as he drove off. Many waved to the crowd, but none spoke. 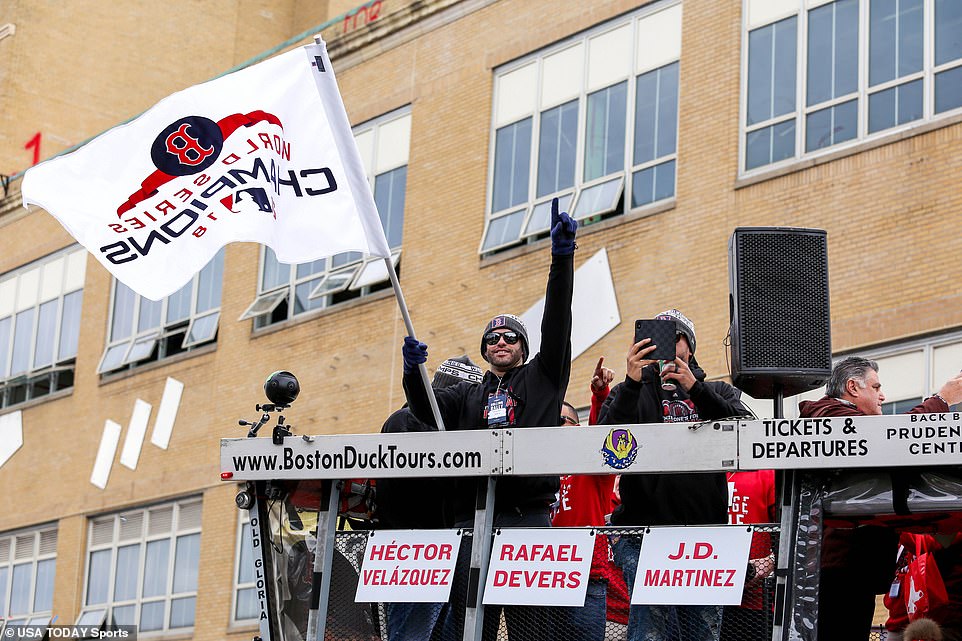 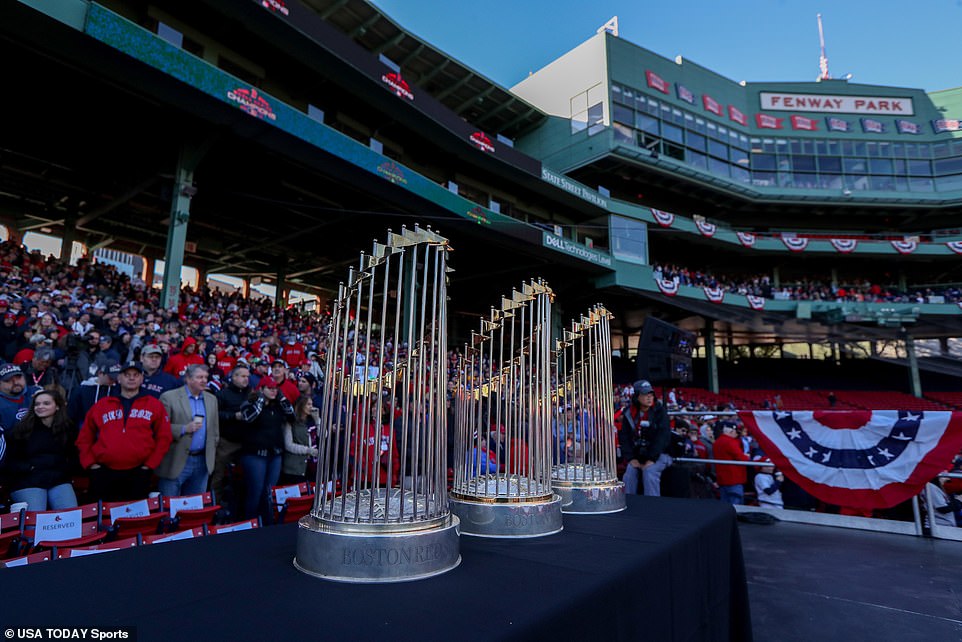 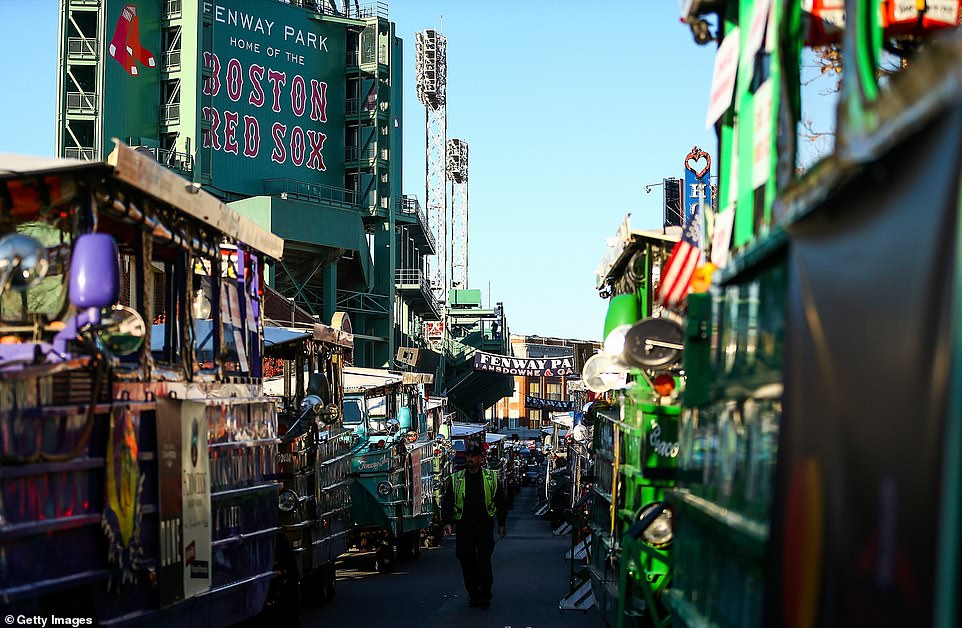 Duck Boats line up on Lansdwone Street before the Boston Red Sox 2018 World Series parade outside of Fenway Park on October 31. This is the franchise’s fourth parade since 2004 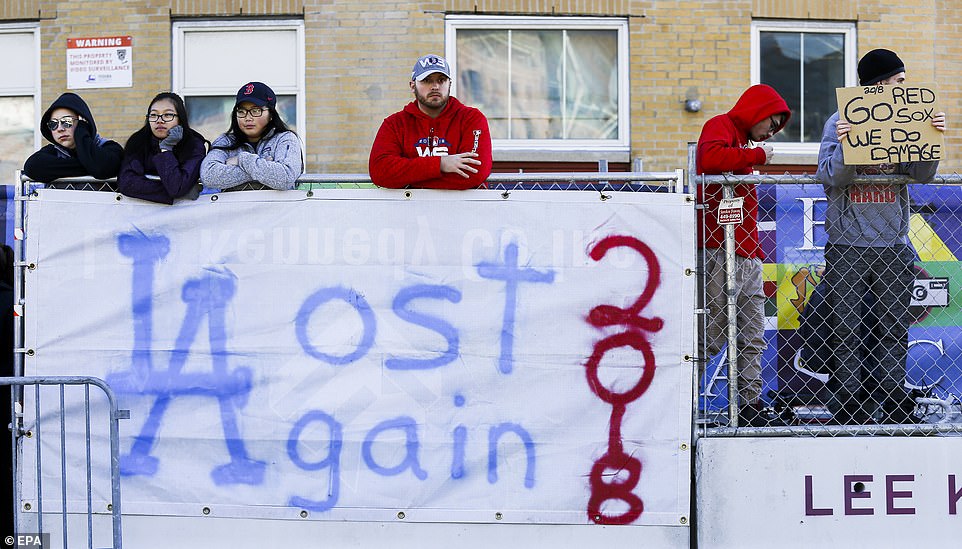 The Dodgers’ postseason struggles have endured since 1988, when they last won a title 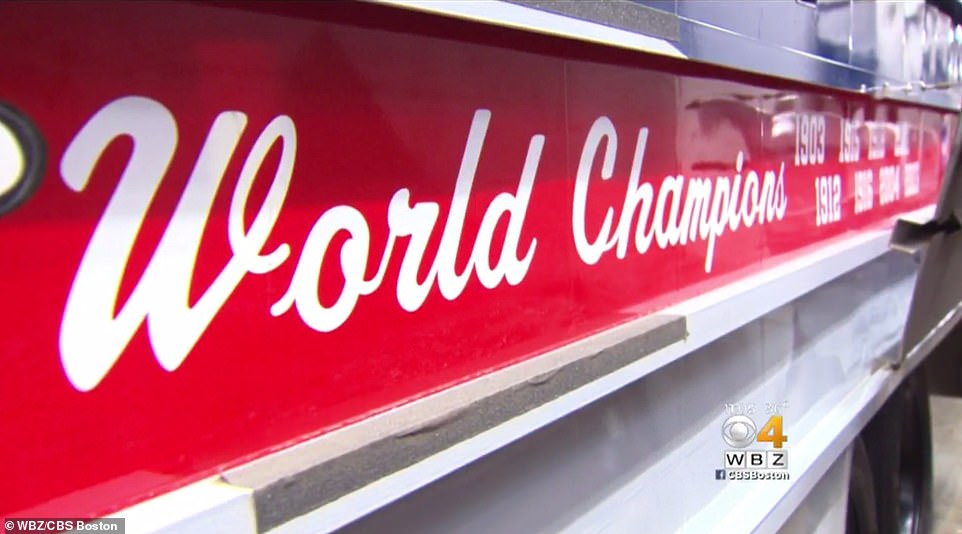 The Red Sox have now won nine World Series titles, which is a lot considering the team endured an 86-year drought between 1918 and 2004, when Boston swept St. Louis 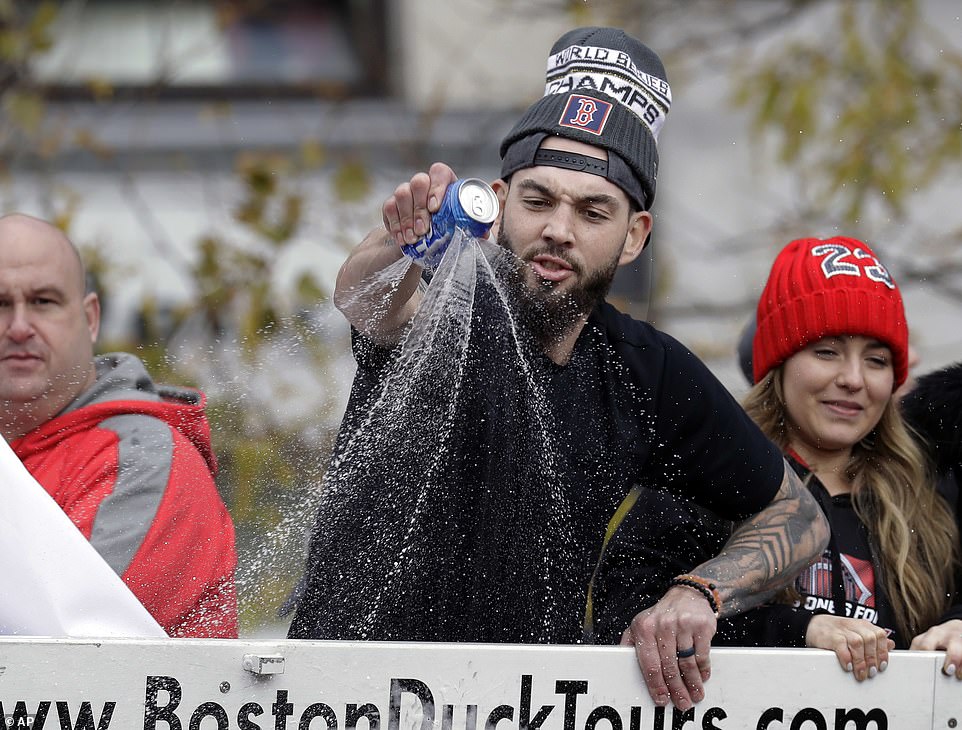 Boston Red Sox’s Blake Swihart sprays the crowd as he passes by during the parade. Bystanders were asked not to drink

Cora left the park wearing a grey sweat shirt with a hood over his head, walking down the street briefly unnoticed before he was followed and surrounded by about a dozen fans. He stopped a couple of times to sign autographs. 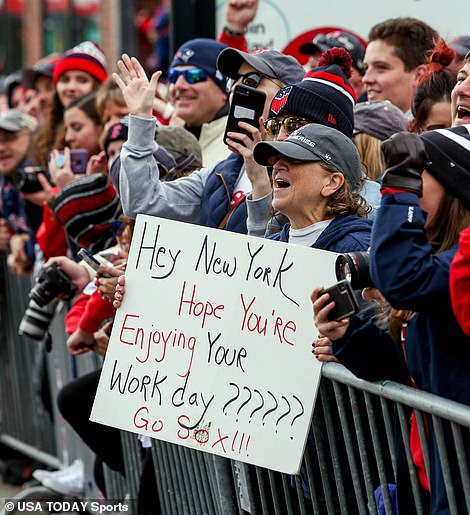 He was asked, ‘How does it feel to be a world champion?’

‘Different,’ Cora said before he strolled away.

Jubilant fans, many of them college students, spilled out in the streets late Sunday and early Monday morning after the Red Sox’ clinching 5-1 win.

Boston police said the crowd was largely well-behaved, and only one arrest was reported. A 22-year-old Connecticut man was charged with malicious destruction of property after climbing a light pole and punching the plastic light fixture, causing the lens to break, officials said.

Police closed off several streets around Fenway Park. A World Series championship banner was unfurled outside it just before dawn.

Two students at Bridgewater State University were arrested early Monday after being accused of vandalizing two life-sized bear sculptures on the campus during a celebration of the Red Sox win, the Enterprise of Brockton reported.

A crowd of about 2,000 students also gathered to celebrate following the game at the University of Massachusetts’ flagship campus in Amherst, MassLive.com reported. A spokeswoman for the university said there were no arrests and no injuries reported. 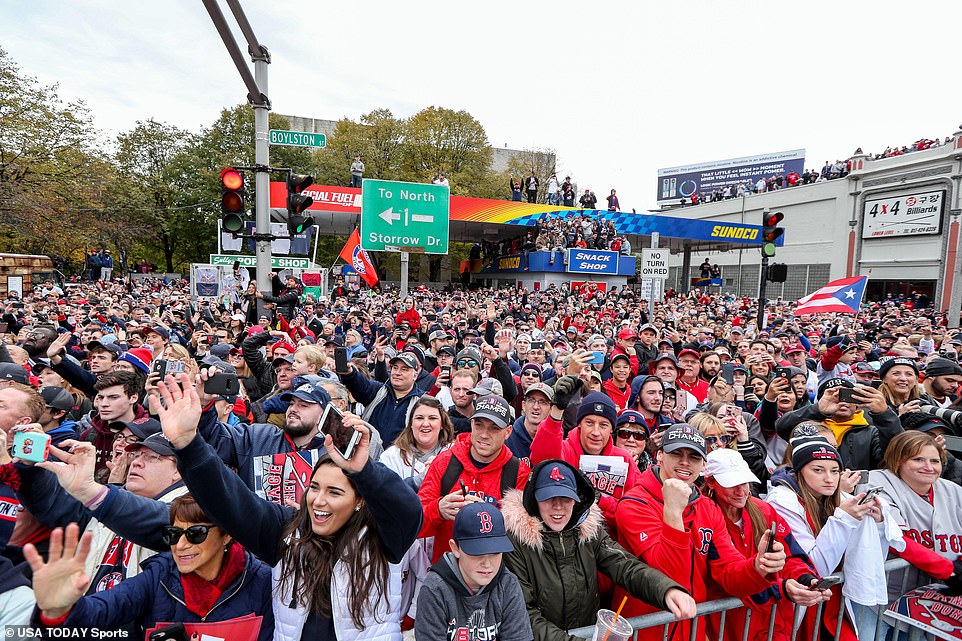 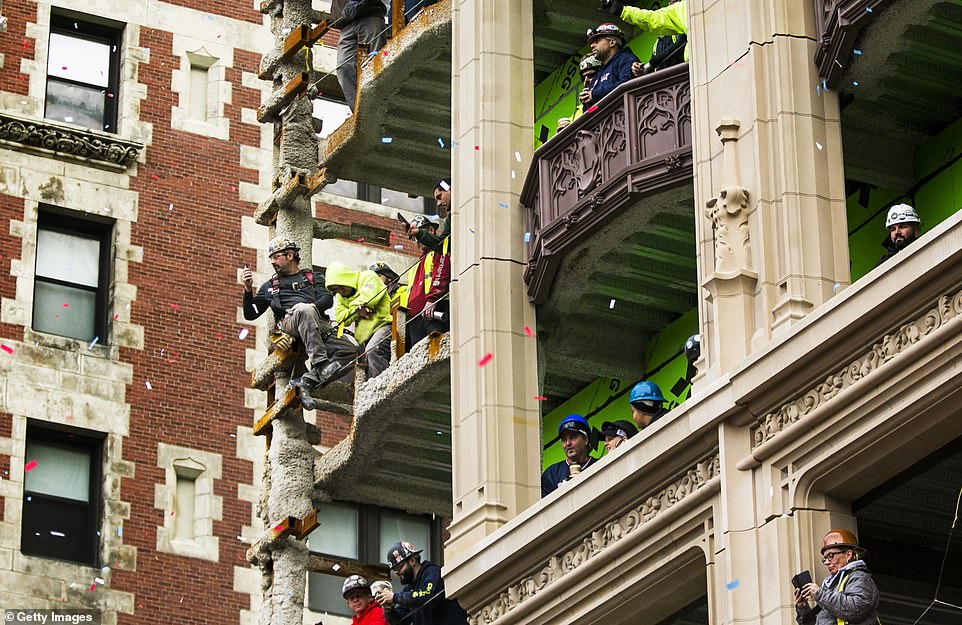 As shown on Boston station WBZ , the amphibious Duck Boats were customized with ‘World Champions’ decals in preparation for the parade

Boston has experienced incidents in the past during spontaneous celebrations, some leading to deaths.

In 2004, an Emerson College student was struck in the eye with a pepper-pellet gun fired by police trying to disperse a crowd celebrating the Red Sox’s American League Championship Series win over the New York Yankees. The city later paid a $5.1 million settlement to Victoria Snelgrove’s family and agreed never to use that type of weapon again. 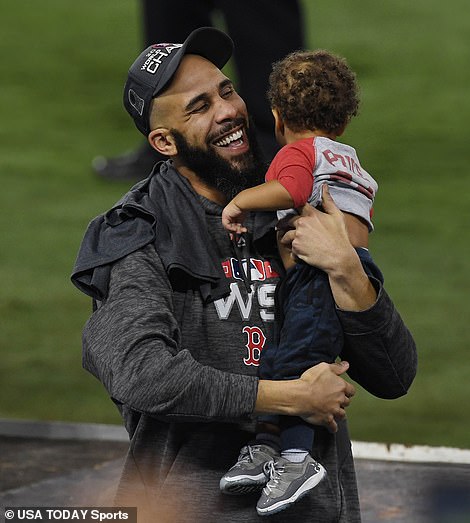 A settlement was also reached with police and the parents of David Woodman, a 22-year-old Celtics fan who stopped breathing and later died after being taken into custody on a public drinking charge during street celebrations after the team’s 2008 championship.

The Baseball Hall of Fame acquired a group of artifacts from the postseason to store in its museum.

Among the items to go on display are a bat used by World Series MVP Steve Pearce in Game 4, a jersey worn by David Price in Game 5, game-worn glasses used by Red Sox reliever Joe Kelly during the postseason, a cap and spikes worn by Red Sox pitcher Nathan Eovaldi throughout the World Series, the ball-strike indicator used by home plate umpire Ted Barrett during Game 3 – the longest game in World Series history – and a hoodie worn by Red Sox manager Alex Cora.

Price announced on the field at Fenway Park before a victory parade Wednesday he was declining a contract option that would have enabled him to become a free agent.

He says he came to Boston to win and that’s what the Red Sox did.

Price will earn $127 million over the next four years under the seven-year, $217 million contract he signed with Boston before the 2016 season. He has gone 31-19 with a 3.74 ERA in three seasons with the Red Sox. This October, he finally pitched like an ace in the postseason as well.

After losing the first nine playoff decisions of his career, Price was the winning pitcher in the AL Championship Series clincher against Houston. He then won his first career World Series start, Game 2 against Los Angeles. He got two outs in Boston’s 18-inning Game 3 loss, then started on three day’s rest and delivered seven innings of three-hit ball to help eliminate the Dodgers. 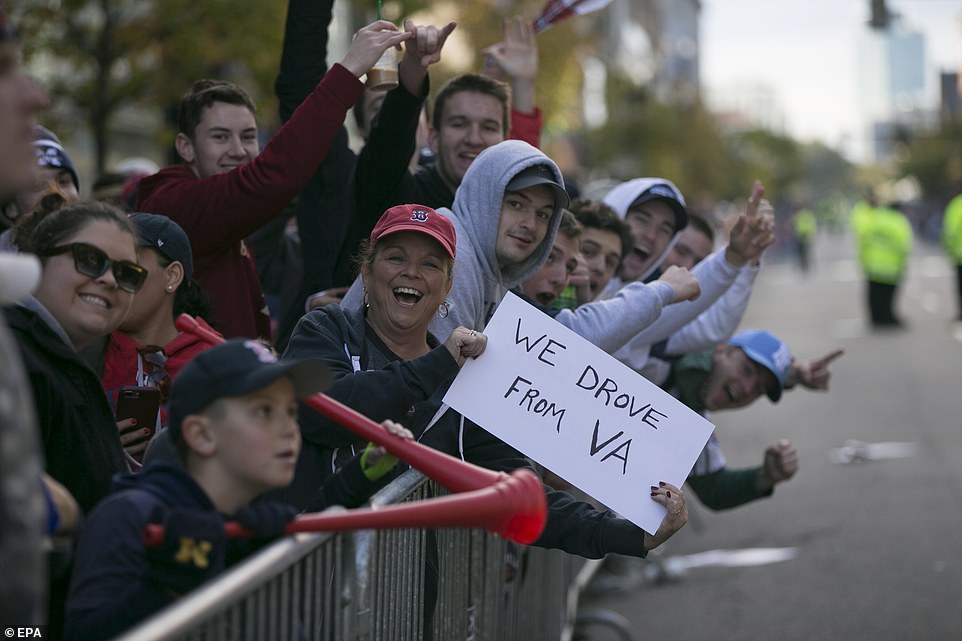 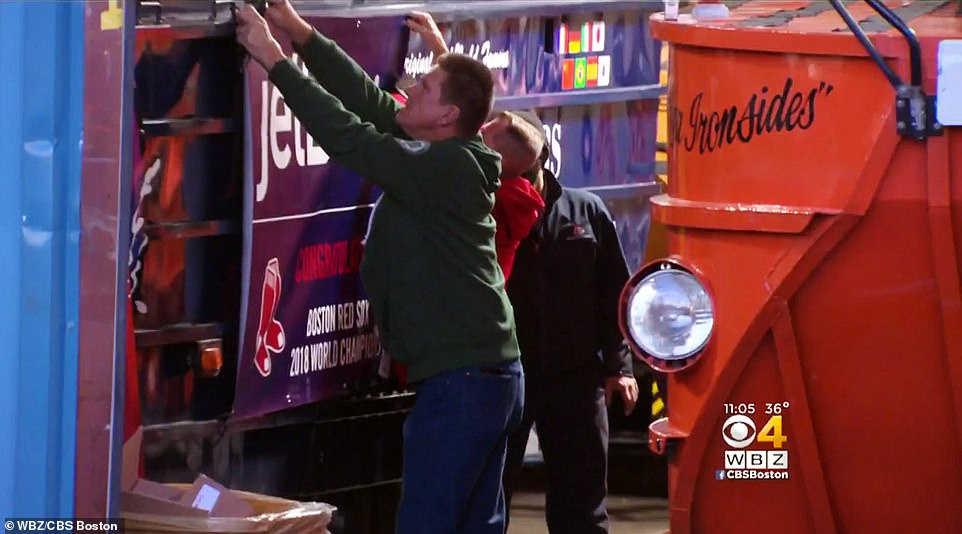 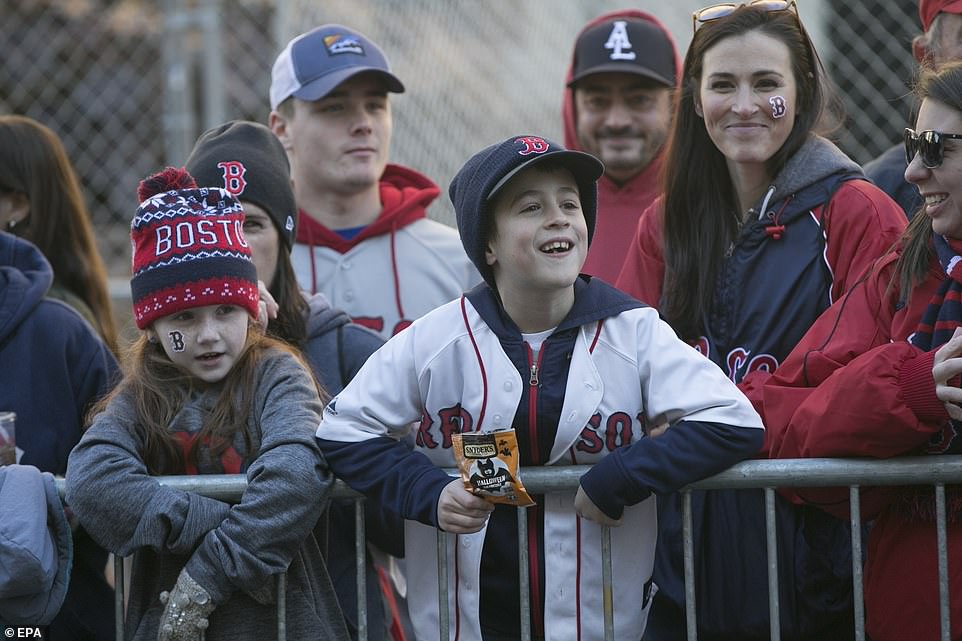 For some younger fans, a Red Sox World Series parade is not an unusual thing. The team has won four titles since 2004, but previously went 86 years without winning the World Series. Many blame he drought on the sale of Babe Ruth in 1919