Red squirrel and woodpecker argue over NUTS in a tree

Food Fight! Red squirrel and woodpecker snapped during heated argument over NUTS in a tree – and only one claims victory

A squirrel was captured holding its ground against a nut-stealing woodpecker.

Photos of the battle surfaced online showing a red squirrel perched on a tree stump with its paw in the air, as the screaming great spotted woodpecker squares off on the other side.

Karen Crawford was walking in a forest near Johnsfield in Scotland where she routinely stops to place the nuts in a tree for the squirrels.

Crawford watch the argument unfold and although the fury contender fought back, it eventually gave up once realizing its feathered opponent had the upper hand.

‘The squirrels are normally waiting for you to put nuts out for them, but the woodpecker arrived first and had to protect its territory, Crawford explained to news agency South West News Service.

‘The woodpecker was on one side of the stump feeding on the nuts and as soon as it saw the squirrel it became aggressive towards it.

‘The squirrel didn’t back off at first but eventually it knew it had to because it wasn’t going to get anything.’

Karen, who normally pictures landscapes, did not realize the shots she took until at home. 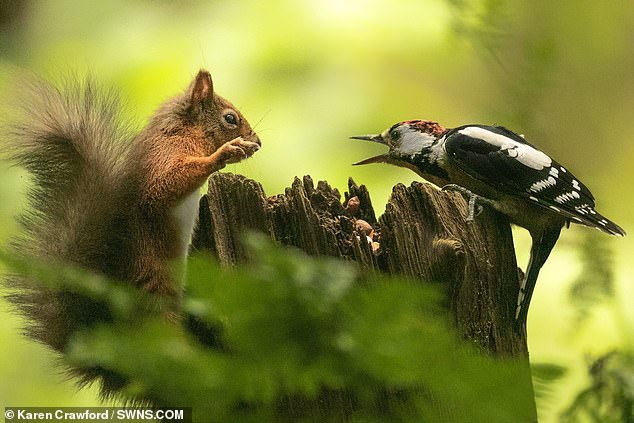 Photos of the battle surfaced online showing a red squirrel perched on a tree stump with its paw in the air, as the screaming great spotted woodpecker squares off on the other side

‘The squirrel had its paw raised and the bird had its beak wide open, it was like they were going to have a fight,’ she said.

‘I thought ‘wow’ when I got home and saw the picture and the reaction I have had to it has been really strong.

‘I normally take landscape pictures but in terms of nature pictures this is one of the best I have ever done.’

The red squirrel population has experienced declines over centuries in the UK and sometimes bordering extinction, according to Wildlife Online.

Researchers found the decline was caused by destruction of habitats  and intensive hunting.

Specifically for those in Scotland, experts have attributed the decrease to deforestation.

James Richie, an author, wrote: ‘The great far-reaching cause of the extermination of the Squirrel was the destruction of the forest.’ 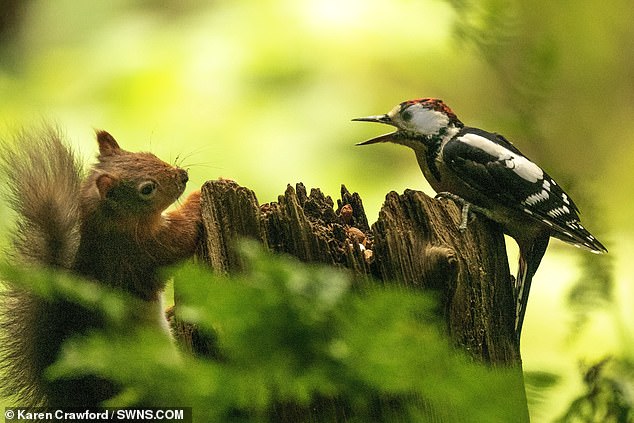 ‘The squirrel didn’t back off at first but eventually it knew it had too because it wasn’t going to get anything,’ said Karen Crawford who captured the images while walking along a forest in Scotland

Along with fighting the occasional woodpecker, the red squirrels major competitor is the grey squirrel.

Not only does it push red squirrels out of their natural habitats, but greys carry a squirrelpox virus that is usually fatal to reds.

There are several projects underway to understand the decline with a view to reversing it – some have attempted to exterminate greys from prime red squirrel habitats.