Redheads have a higher PAIN threshold than blondes or brunettes because their skin’s pigment-producing cells lack the function of a certain receptor, study reveals

Ginger people can tolerate more pain than brunettes and blondes, and a new study has found out why this is.

It found that the skin cells that determine a person’s pigmentation, called melanocytes, are pivotal in deciding a person’s pain threshold.

Redheads have a genetic mutation which means their melanocytes have a faulty version of a key receptor and therefore cannot make dark pigment to get a tan.

A knock-on effect of this is a chemical imbalance leading to a cascade of different hormones which ultimately enhances the effect of pain-blocking opioid receptors.

The end result is that gingers produce more opioid signals than people with other hair colours and complections and therefore have an elevated pain threshold.

Redheads have a genetic mutation which means their melanocytes have a faulty version of a key receptor and therefore can not make dark pigment to get a tan. But a knock-on effect of this is a chemical imbalance leading to a cascade of different hormones which ultimately enhances the effect of pain-blocking receptors (stock)

Researchers from the Massachusetts General Hospital looked at red-furred mice in a laboratory.

The skin cells of the rodents are similar to those of humans and the cause of red hair is comparable in the two species.

Dr David Fischer led a previous study which found fiery-haired people cannot create dark pigment and tan as a result of a loss of functionality in melanocytes.

Gingers, the rarest of human hair colours, like all people have a receptor on their melanocytes called melanocortin 1 which sticks out from the surface of the cell. 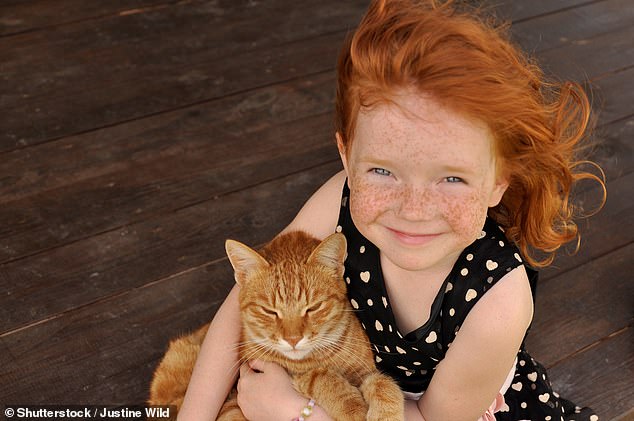 Gingers, the rarest of human hair colours, like all people have a receptor on their melanocytes called melanocortin 1 which mediates production of dark skin pigment. But in redheads it is faulty. This leads to a hormone level different to people of other complection and results in an elevated pain threshold (stock)

Going grey ‘is caused by stress’

Scientists have finally proved what conventional wisdom has been telling us for decades — that being stressed causes hair to go grey.

However, researchers from Columbia University also found the process can be reversed in hairs that have only recently turned grey.

Reducing stress could stave off grey hair, scientists say, and it is hoped drugs could be developed to further prevent the unwanted process.

The study found hairs from all over the scalp can reverse greying. It also discovered that beard and pubic hairs can regain their colour after starting to go grey.

Scientists believe the root of the greying issue comes from changes to metabolic pathways which form proteins the body.

These pathways are heavily influenced by hormones produced when a person is stressed, and relieving stress can therefore undo the process.

Its normal role is to control when the body starts making dark brown or black pigment.

However, in redheads it doesn’t work, causing the pale skin of many gingers which never goes bronze and is prone to sunburn.

But Dr Fischer found these defective receptors also alter the production of a chemical called POMC which then degrades into various hormones.

These hormones create an equilibrium between pain-inhibiting and pain-enhancing receptors.

In redheads, the damaged melanocortin 1 receptor causes less POMC to be produced and therefore they have lower levels of the derived hormones.

This means the equilibrium in redheads is at a lower concentration than in people with other hair colours.

This therefore enhances the impact of  other hormones — not made by the skin pigment cells — which boost the effect of the pain-quashing opioid receptors.

As a result, redheads have an elevated pain threshold, the researchers conclude in their study, published in Science Advances.

‘Understanding this mechanism provides validation of this earlier evidence and a valuable recognition for medical personnel when caring for patients whose pain sensitivities may vary.’