From a man who lost his brother after they escaped war-torn Syria, to a teenager who still texts her late friend to feel close to her, the stories behind victims of the Grenfell tragedy have been revealed for the first time in a moving documentary.

Months after the fire which killed 71 people, presenter Reggie Yates started piecing together the human stories behind the tragedy to discover more about the lost victims of the inferno.

Reggie Yates: Searching For Grenfell’s Lost Lives, which airs on BBC Two tonight sees the presenter uncover heartbreaking stories such as that of  refugee Omar Al Haj Ali, 25, who watched helplessly as flames engulfed his brother who was still trapped in their flat.

He was moved to create the film after growing up on an estate similar to Lancaster West, the site of the tower, with his parents who had moved to the UK from Ghana.

‘I understand what it means to live in a community like that. And I understand the lazy preconceptions that sometimes exist.

‘They are not places of decay and hopelessness, they are places of hope and energy and ambition. That’s the spirit I wanted to capture by uncovering the stories of those who lived there.’

Reggie Yates: Searching For Grenfell’s Lost Lives, which airs on BBC Two tonight sees the presenter uncover some of the victims’ heartbreaking stories for the first time

Syrian refugee Omar Al Haj Ali, 25, managed to escape from the 14th floor flat he shared with his brother Mohammad, 23, who perished in the fire.

The brother escaped Daraa, which was almost completely destroyed by the war, and were granted asylum in the UK.

On the night of the fire, Omar recalled fearing he was going to die as their 14th floor flat became engulfed by smoke.

Fire fighters opened the door and and as even more smoke filled the flat, he couldn’t see anything.

‘They pushed me outside to the corridor and I didn’t see anything. I couldn’t speak. I was breathing the smoke. I wanted to go back, and shout, “where is my brother?”,’ he recalled.

Then he had a phone call from his brother who told him: ‘I’m still in the flat. Nobody took me out’. Reggie with Omar Al Haj Ali, 25, a Syrian refugee who survived the blaze, but lost his brother Mohammed

‘Then I saw him from the window,’ he said. ‘He was saying “help” and shouting from the window. I was on the phone with him all that time. I was shouting, trying run to the tower to go upstairs. I saw the fire closer to his room. Then he told me I want to speak to my family.

‘I closed the phone. He spoke maybe to my family that time. I was looking at the tower and the fire was in the flat. He didn’t make it after that.’

Omar revealed how he dreams of his brother every day and all he has left of him is a pair of shoes and his jacket, which Mohammed gave him to wear on the night of the fire – which still smell of smoke.

‘Everything from Mohammed helped me to escape,’ that night.

I lost my best person every in my life. He left a big space inside me.

When I came from my country. I came without anything. I felt like I was starting from nothing. After I build myself I felt I am doing well again. I feel now I lost everything again, even worse than before.’ 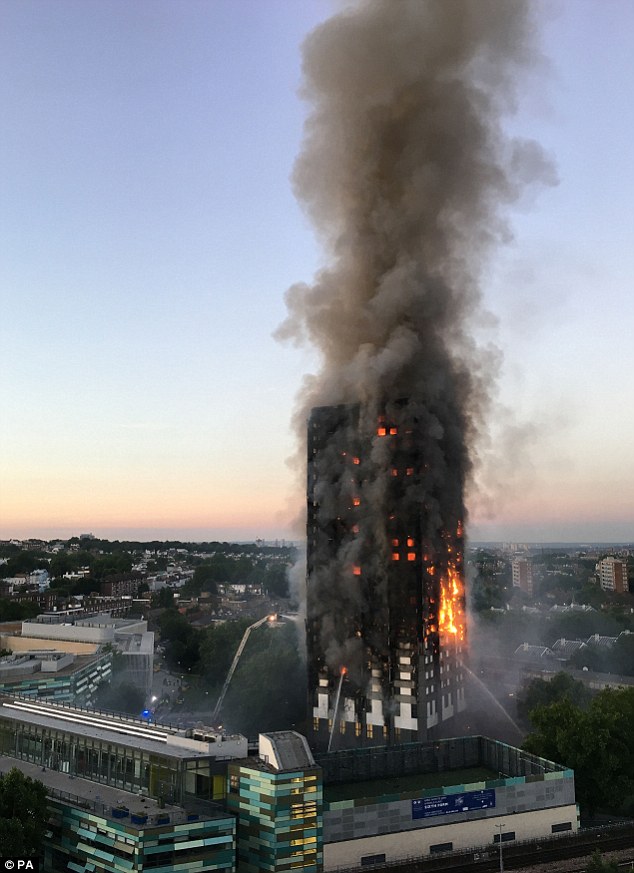 The fire in June last year claimed the lives of 71 victims, and many of their personal stories are still unknown to the public

The British-Moroccan died after running into the inferno to try to save his family.

His schoolfriend Riz told Reggie: ‘He wasn’t in there. He ran in there to save his family, this is the truth we need to talk about. He wasn’t in the building at the time, he ran into the fire.

‘Why do you think he did that?’ Reggie asked

Another friend, Paul, added: ‘I do still have guilt that I didn’t do more, instead of going downstairs I wish I had gone upstairs and tried to save more lives, but you don’t know how bad it actually was until you got out of the building and actually witnessed what you witnessed.

‘It feels still like a dream to me that I am going to wake up back in my bed, back inside my flat there and not see my neighbour and see Yasin like I see him everyday.’ 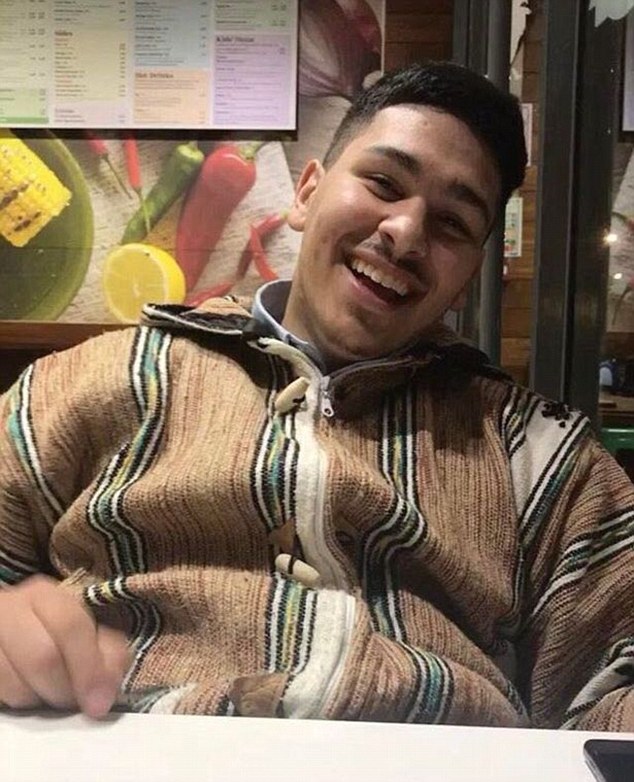 British-Moroccan Yasin El Wahabi, 20, died after running into the inferno to try to save his family.

Reggie spoke to two friends of the 12-year-old who perished on the 20th floor of the tower.

One of the girls is living in another flat nearby, where she can see the ruins of the tower from her window.

‘I keep my blinds closed, I don’t look out,’ she said. ‘I don’t want to see Grenfell tower out of the window.’

Paying tribute to her friend, she poignantly skipped between past and present tense.

‘Jessica is the first person I have ever known died,’ she said. ‘I miss talking to her. You know someone who could hold a long, long conversation is Jessica. 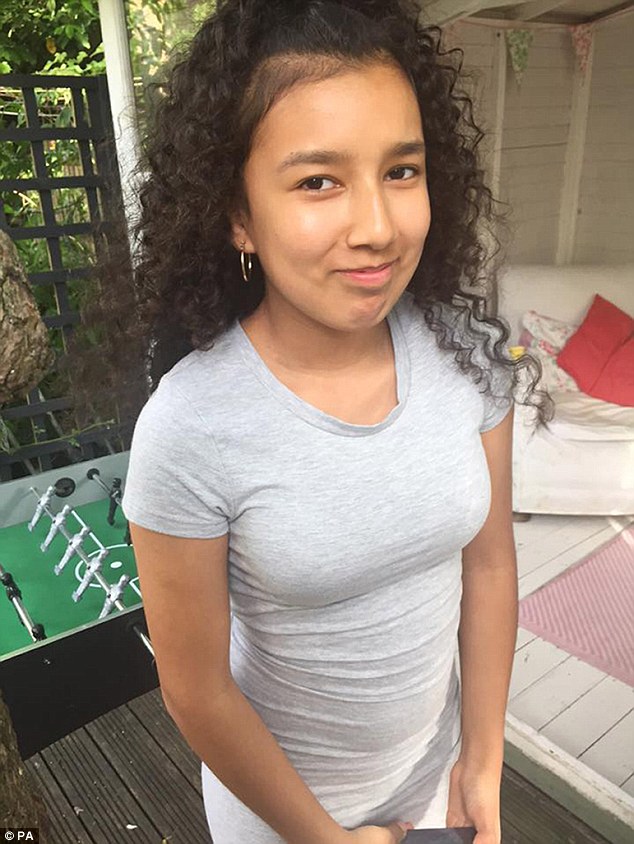 Jessica Ramirez, 12, was a bubbly girl who would speak to everyone and was hugely proud of being Colombian, according to her friends

‘She’s a really pretty girl. Look at her hair.

Her friend added how proud her friend was to be Colombian.

‘She would tell people: ‘”I’m a Latino”. She was so proud of her heritage. And that’s something I always admired about her.’

And she admitted she still texts her late pal to maintain a connection.

‘We send messages to her. “How are you? How are you feeling today? Are you watching over me?”. It’s a way to feel close to her.’ 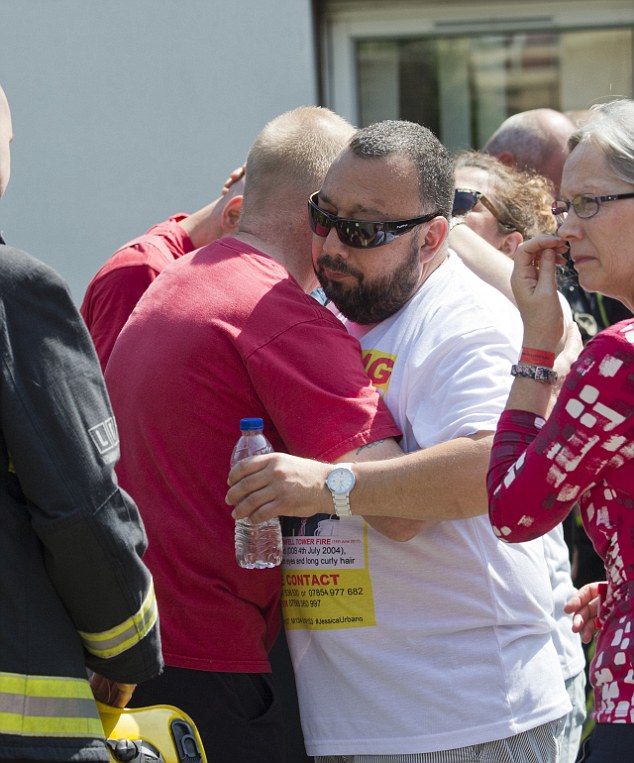 Romero Urbano, Jessica’s father, at the tribute wall near to Grenfell Tower in West London

Came from the Philippines in the ’70s. She was a beautiful woman who had lots of admirers, but her family said she wasn’t interested and she always had her sights set on moving away for a better life.

She came to the UK and worked various jobs, including as a live-in nanny, before meeting her husband Jim.

‘Her dream was to be here in London and she found the love of her life,’ her niece May explained. ‘She was living her dream.

‘She really loves London. I think the Grenfell tower is located in a posh area.

‘She would say: “Oh you know the movie Notting Hill with Hugh Grant and Julia Roberts. I live near that place”. She was nearly bragging about it.’

May was anxious to see the tower on her visit, so that she could be close to her aunt’s former home – but broke down on seeing the burned out shell.

‘Maybe I was expecting too much because this is London,’ she said. ‘In the Philippines when a fire happens we know it’s faulty wiring or someone just lit a candle and it’s done. And there are not a lot of families who died.

‘It’s a terrible feeling how a First World country like yours had a lot of people who died in the fire. I hope the coroner will be able to give us answers. ‘ Ligaya Moore, 79, from the Philippines loved living in London and even boasted to her family about staying near where Notting Hill was filmed